Value fund managers and their investors have seen some relief in recent months—well-earned after a decade of underperformance. Only twice in that time frame have large-, mid-, and small-cap value funds all, on average, outpaced growth (and it was only by small margins in 2014, one of the two years).

Of course, it hasn’t always been the case that value funds were underperforming so severely. For instance, in the early 2000s, they saw strong performance in the aftermath of the dot-com crash. And against these different backdrops, it’s not always clear which strategy may best serve investors in the long term.

Here, we take a look at the past, present, and future of value and growth stocks.

Value vs. growth performance over the years

As shown on the chart below, 2016 was the only year within the past decade when value came out of a calendar year solidly ahead of growth.

But the scale of value’s underperformance truly becomes clear through the lens of cumulative returns. The chart below shows this, with three-year returns measured as of Dec. 31 for each year shown.

Prior to value strategies’ jump in September 2019, the three-year cumulative return gap would have been the largest since 2000 across all three market-cap spectrums.

Investors don’t have to look too hard to see the disparity between value and growth. For example, among the top 50 best-performing stocks in the S&P 500 over the last three years, only two—NRG Energy ( NRG) and Progressive Corp ( PGR)—are classified by Morningstar as value stocks.

The headwinds facing value managers also become clear through an examination of the sectors where their portfolios have been overweight or underweight compared with growth funds.

For instance, in August 2016, large-growth funds had a significant weighting in technology stocks (almost 27%) and consumer cyclicals (about 18%). Large-value funds’ largest weighting was in financials (20%), and they also were weighted toward energy stocks.

These sector returns over the next three years are shown below. The technology sector helped large-growth funds yield strong results with returns of more than 77%, while large-value funds suffered from energy stocks’ 12% loss. 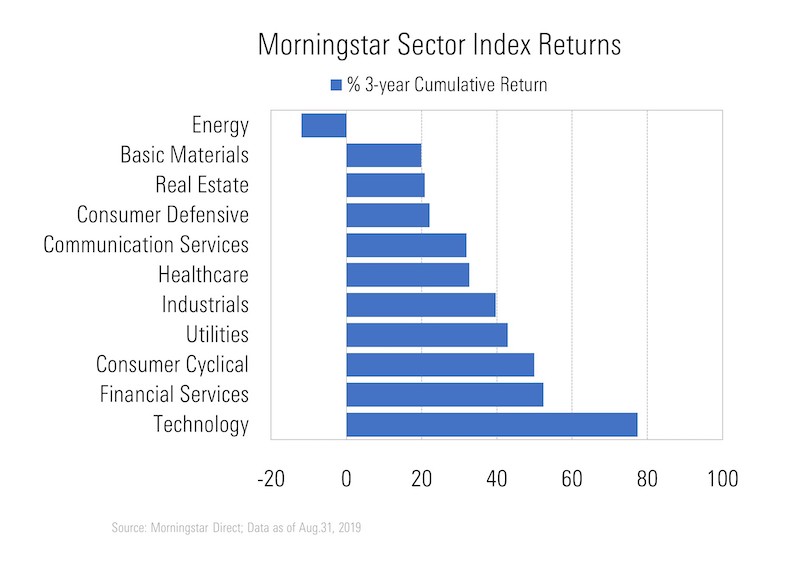 This shows that the financial sector was a significant overweight for small-value stocks relative to small growth: 25.7% to 5%, respectively, for a total difference of 20.74%.

Healthcare was the largest relative underweight. The small-value fund portfolio held less than 5% in the category, compared with nearly 19% for small growth.

From the experts: What we’ve seen in value

Morningstar’s fund analyst team has seen firsthand how value and growth strategies are evolving and performing. Here, a few members of the team shared what they’re hearing from managers who are wrestling with the long spell of underperformance for value.

“One theme I’ve heard from several fund managers, especially managers who have drifted from value toward blend in our style box, is that traditional metrics may be insufficient to assess ‘value.’

Take Diamond Hill Large Cap: A few years ago, they invested in Alphabet and Facebook, which seemed like a deviation from their typical holdings. However, the team highly regards network effects and other intangibles that traditional metrics like price/book and price/earnings fail to capture. Given the continued evolution toward these service-oriented companies, it emphasizes the importance of taking into consideration these intangibles, such as brand value, network effects, and so on.

After following the companies for over a year, the team felt that it understood the key drivers of revenue growth for the next five to 10 years and the value from network effects and advertisers.”

“Beginning in the early 2000s, Mark Casey gave analytical support to American Funds Washington Mutual. Only 5% of this fund’s assets can be invested in stocks that don’t pay a dividend, and for 14 years, Casey was in charge of making recommendations of the nondividend payers that met the fund’s other eligibility criteria.

For instance, he helped Capital Group’s managers understand the value of Amazon Web Services to Amazon.com. Amazon first appeared as a modest position in American Funds Washington Mutual’s September 2010 portfolio and grew in size to a top-15 holding by year-end 2013. It then exited the portfolio in the fourth quarter of 2014 because Amazon’s proclivity to reinvest in its business meant that it no longer met the fund’s eligibility criteria.

This is the kind of value-oriented approach from Casey that has done well the past decade. It is focused on the ability and likelihood of companies to generate enough cash in the near future that their current share price proves to be a bargain, and it is less focused on companies that simply seem cheap based on book value.”

“Hotchkis & Wiley, a contrarian and, these days, deep-value shop, talks a lot about the historical gap between value and growth. But, like many managers, they’ve gotten burned this year by a classic value sector: energy. They have big overweights across their funds in this sector that have hit them hard.

Perhaps somewhat ironically, I’ve heard a lot of value managers say they won’t buy utilities—historically, a value mainstay—because they’re too expensive, as they’ve been bid up in this low-rate environment. Yet, utilities have done well during recent corrections, hurting value funds even more despite them following their disciplines.”

“It seems that, much like the end of the 1990s, investors are excited by what’s new and disruptive rather than tried and true. Value just hasn’t had an attractive story to tell; it’s almost like it’s too boring. I’ve heard managers complain that Tesla has had a higher market value than more-established car companies.

One of First Eagle’s top holdings is Weyerhaeuser. Today’s cynic might ask, ‘Who wants to invest in a company that owns forest lands when one could be a part of the next big thing?’”

To learn more about how the Morningstar Risk Model can help you dig into value vs. growth, download our white paper.
Get My Copy