U.S. stocks finished 2021 near fresh record highs, having posted their third consecutive year of double-digit gains thanks to a strong economic rebound that helped the market weather the ongoing waves of the coronavirus pandemic.

With that rally, U.S. stocks are posting their best three-year returns in 24 years. Even with the steep bear market at the onset of the pandemic, the Morningstar U.S. Market index has risen an average of 25.9% over the last three years. 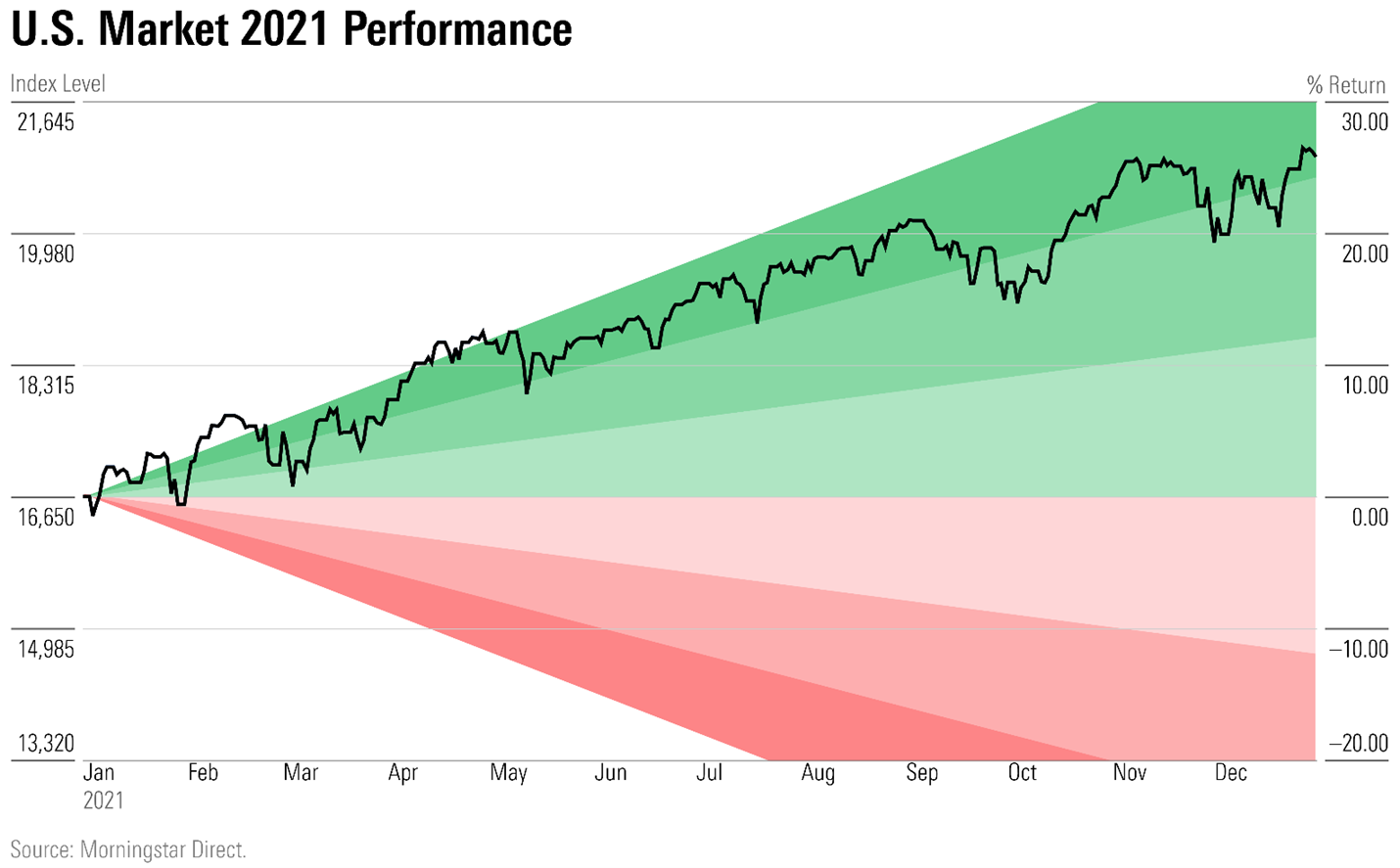 All sectors of the U.S. market posted gains, and while large company stock generally outperformed, small value was the best-performing group within the Morningstar Style Box. One notable change in the stock market landscape was the shrinking influence of the very largest stocks in the market--and in particular, the FAANG stocks of Facebook (now Meta) (FB), Apple (AAPL), Amazon.com (AMZN), Netflix (NFLX), and Google (GOOGL).

Concern over the quickly spreading omicron variant spooked U.S. markets in December, but in a pattern that played out many times in 2021, stocks shook off the news and soon reached new highs. The U.S. market gained 9.5% in the final three months, its best quarter since fourth-quarter 2020.

Over the course of 2021, the U.S. Market index hit 66 new highs and outperformed international stocks in every quarter. Non-U.S. stocks struggled in the fourth quarter and throughout the year. The Morningstar Global Markets ex-U.S. index ended the year up 8.4%, trailing the U.S. market index by 17 percentage points. Emerging markets, meanwhile, were dragged down by declines in Chinese stocks, overwhelming an outstanding year for India’s stock market. 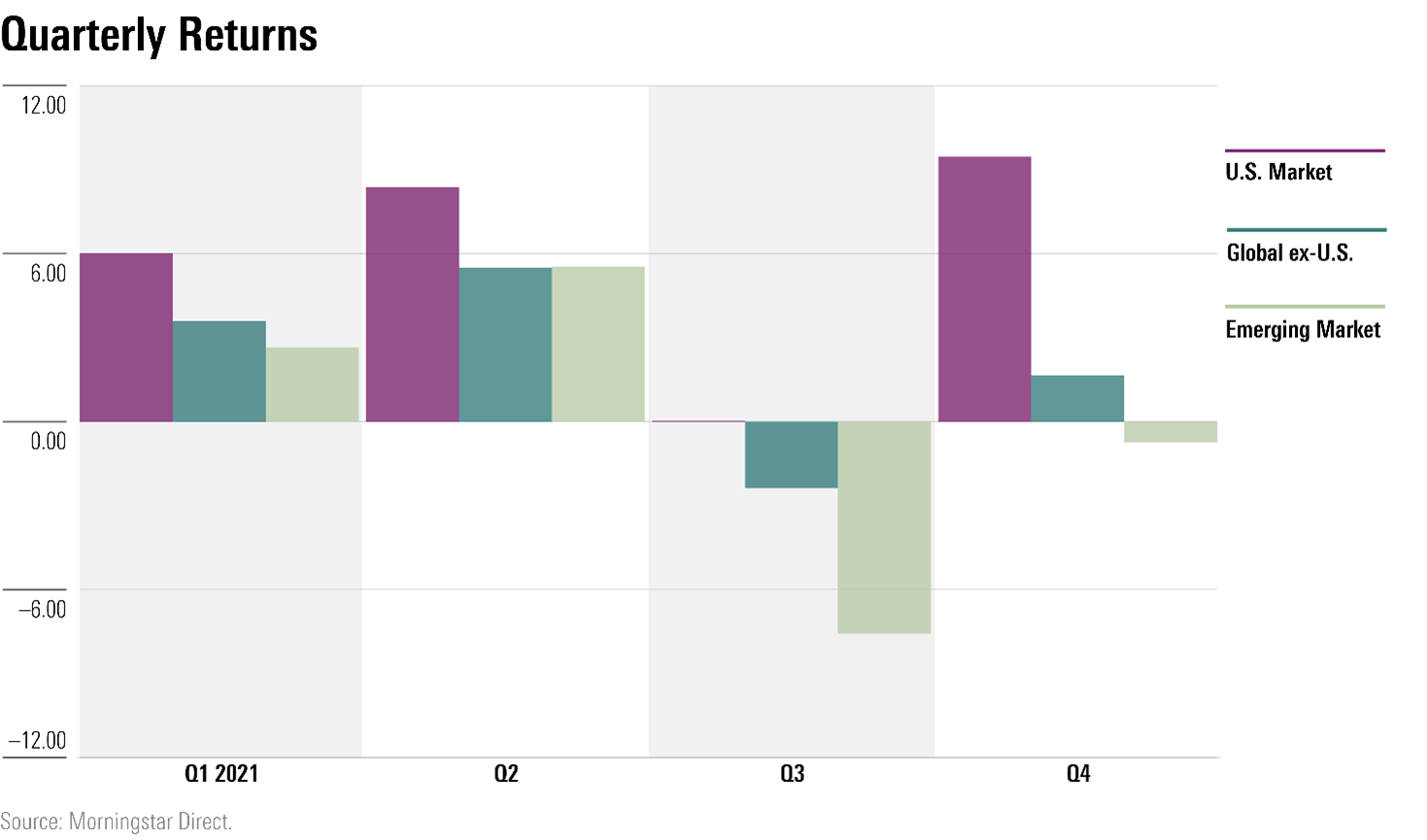 As the economic recovery broadened out through the year, sectors that were hard hit in 2020 recovered. Most dramatically, as oil prices rose 58% in 2021, energy stocks rebounded strongly, rising 55.7% after a 32% loss in 2020.Similarly, real estate stocks recovered from a poor 2020 as the struggling hotel and retail real estate industries benefited from mass vaccination and the economy reopening, and property values rose across the country.

Though the impact of technology companies on broader indexes has lessened, they still led in the fourth quarter, led by semiconductor companies, where demand is outstripping supply-chain-constrained availability of chips.

The decline of some of 2020’s best performers hurt the communication services sector, and the group was the worst performer in 2021. After gaining more than 100% in 2020, both Zoom (ZM) and Zillow (Z) fell by more than 40% in 2021. Poor performance from Disney (DIS)--down 14.5%--and a sell-off in telecom names further depressed the sector. 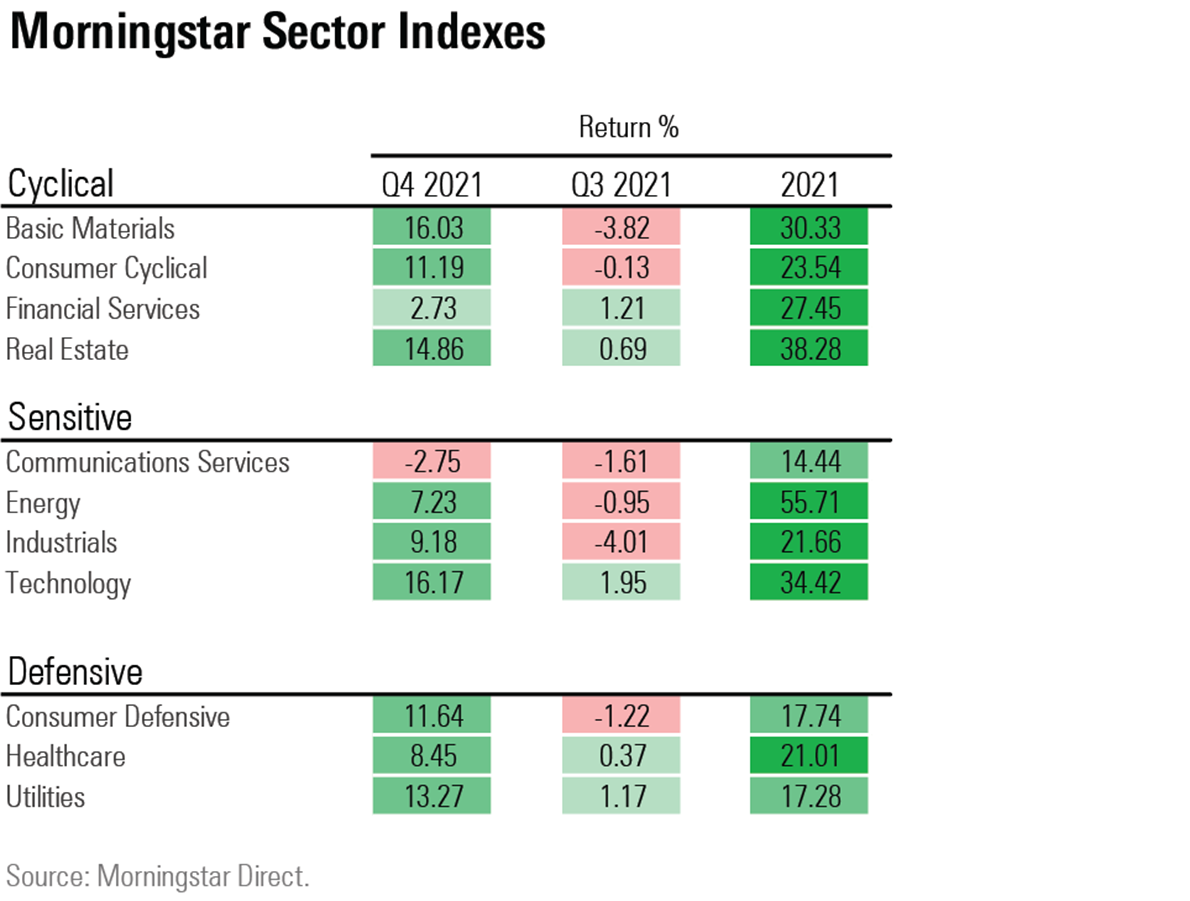 In 2020, the Morningstar Style Box painted a clear picture as stay-at-home tech companies benefited, while more economically sensitive value stocks suffered. In 2021, the sharp divergence in performance faded. While mid-cap value and small-value stocks starkly outperformed their growth counterparts, large-growth stocks, bolstered by technology names, finished on par with large-value stocks. Both indexes ended the year up 21.5% and though the margin was slim, large-value stocks haven’t bested their growth counterparts since 2016.

The Morningstar Small Value index gained 31.8%, more than any other Morningstar Style Box category, while small-growth stocks, hurt by a struggling biotech industry, posted a loss for the year. Small-value stocks haven’t topped the Style Box since 2016.

Overall, it was difficult year for most types of bonds as investors weighed inflation and looked to riskier areas for higher yields. The Morningstar U.S. Core Bond index ended the year with its first loss since 2013, down 1.6%. The 10-year U.S. Treasury yield rose rapidly at the start of the new year as optimism about the economic recovery began to spread thanks to the rollout of COVID-19 vaccines. The 10-year yield reached a high in March at 1.75%. With the Fed signaling a shift toward less-accommodative monetary policy, soothing investor concerns about rising inflation, the 10-year yield finished 2021 at 1.52%, off from its highs but still up 0.59 basis points from where it started the year. 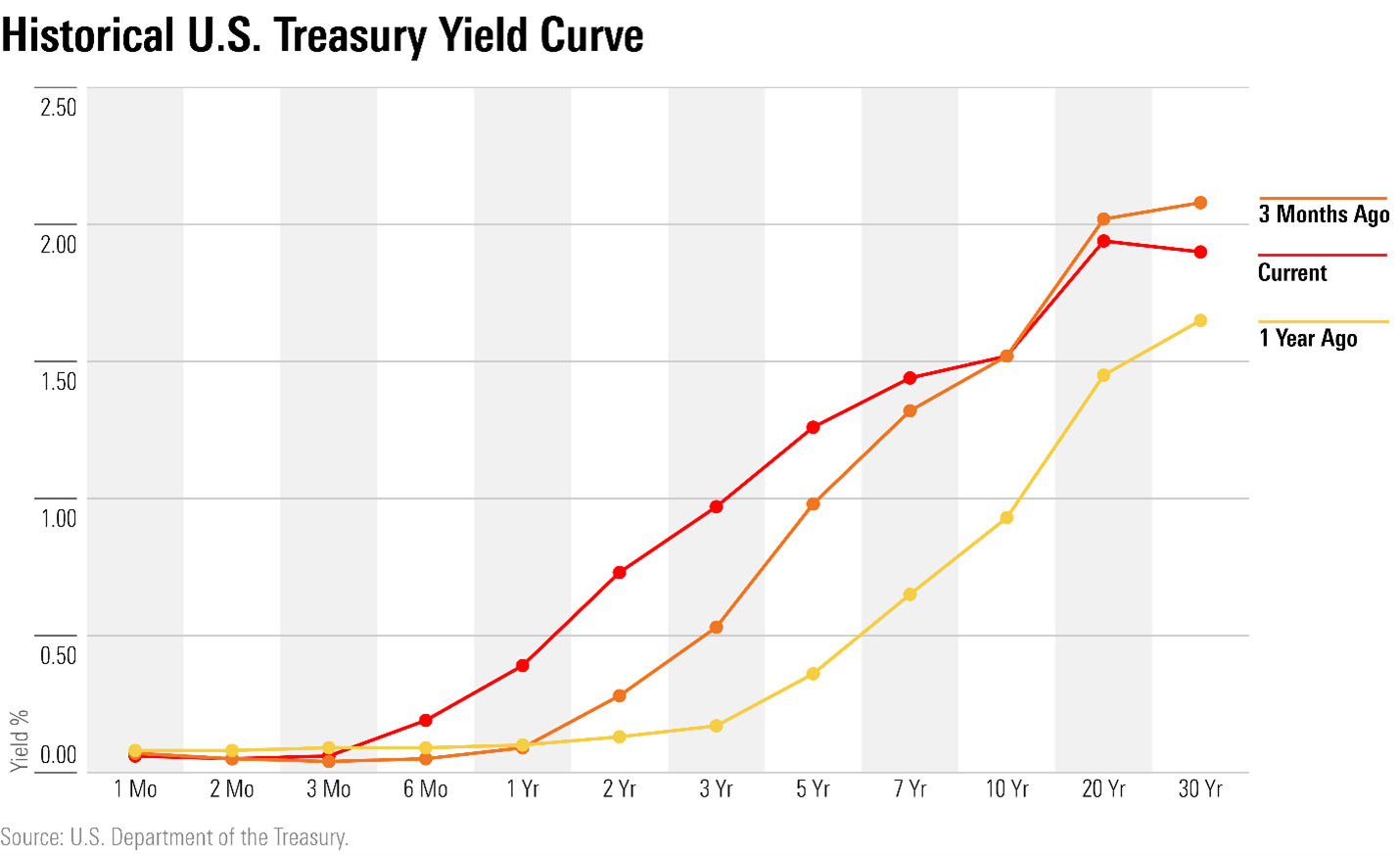 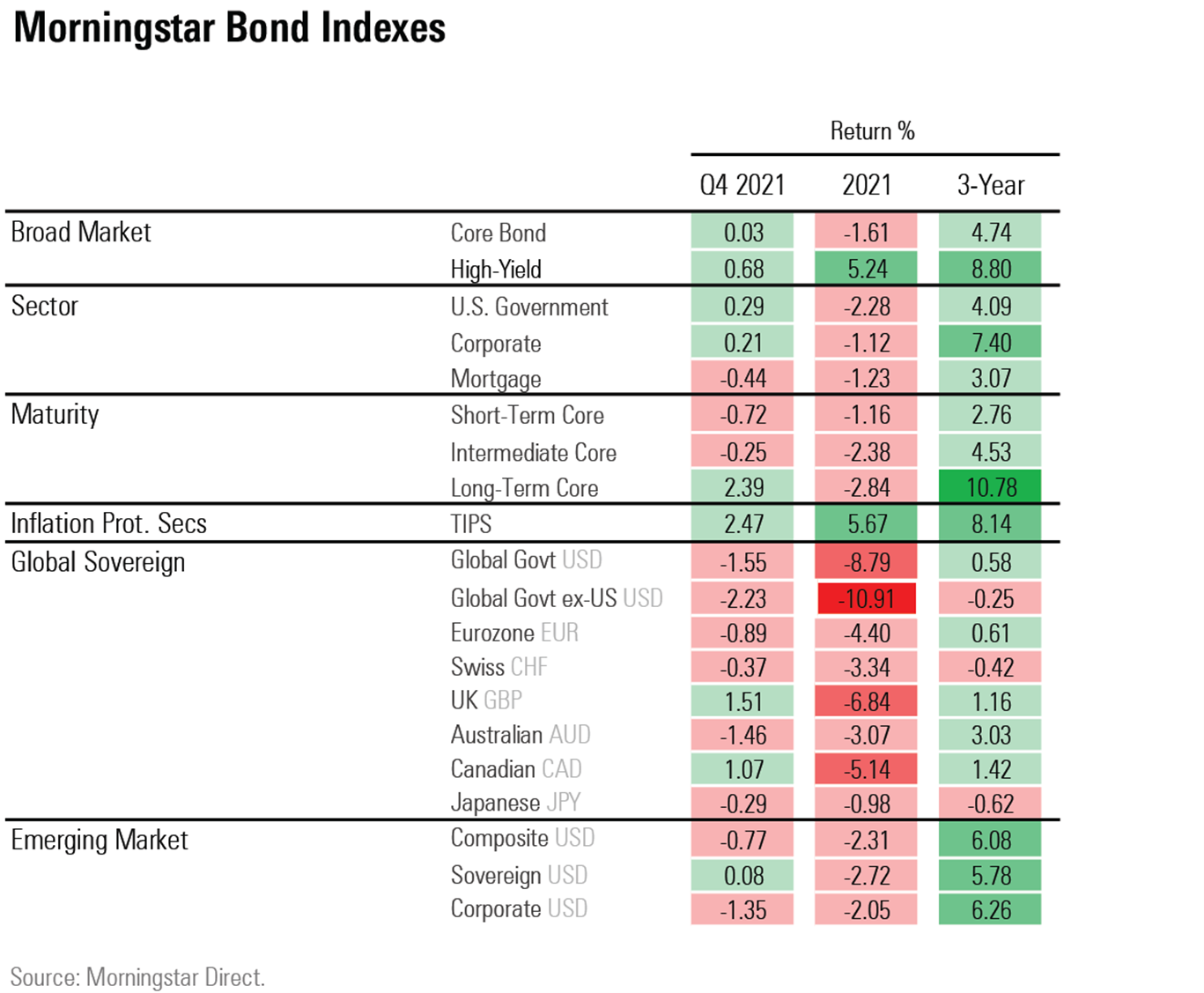 Only high-yield and inflation-protected bonds ended the year in positive territory. High-yield bonds gained 5.2% and outperformed U.S. core and corporate bonds for the second year in a row. 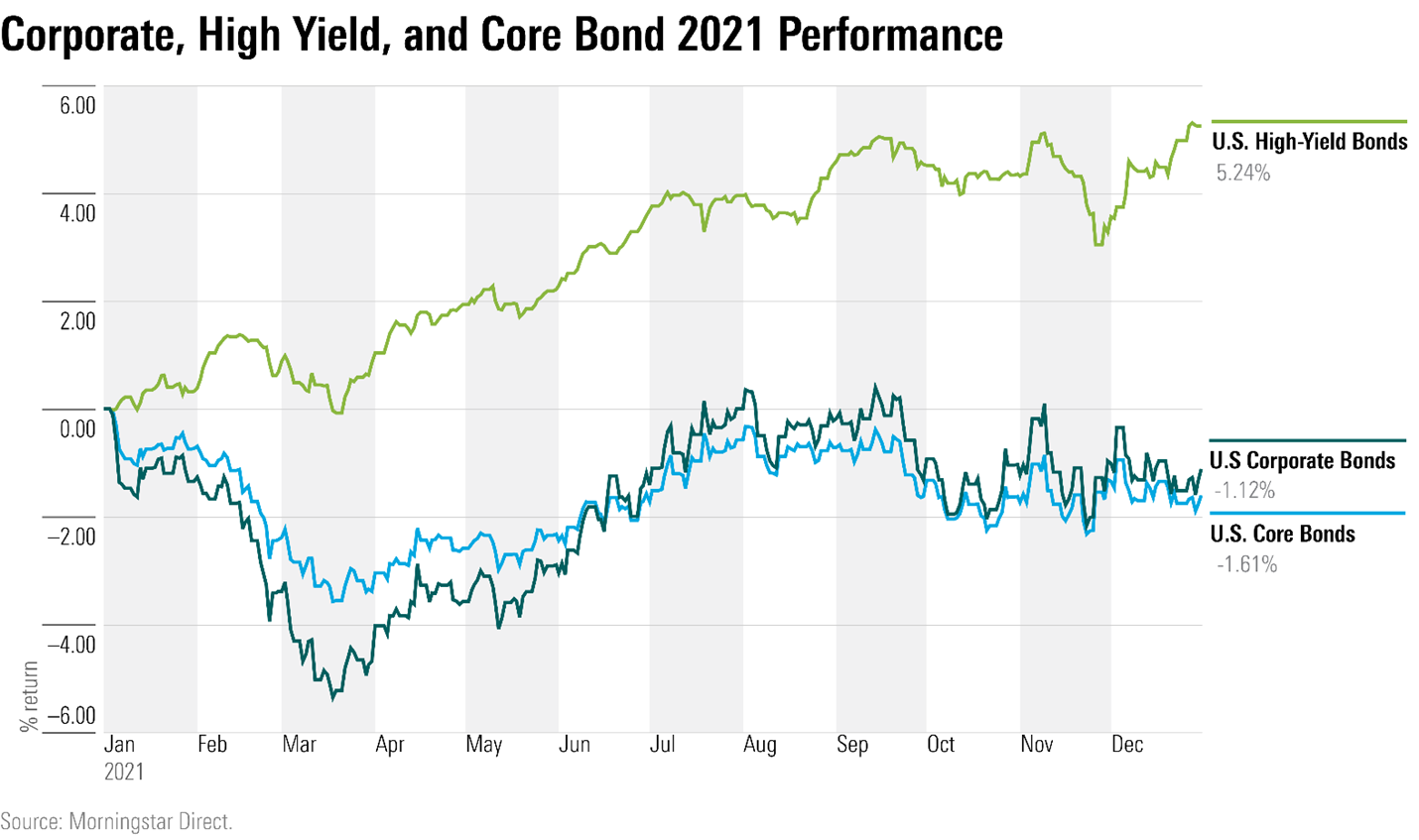