As families grapple with the rising costs of college, they’re increasingly turning to 529 college savings plans to help fund their children’s education. That movement pushed the 529 market to an all-time high in December 2019, when assets approached $328 billion, before the coronavirus sell-off caused it to fall to around $293 billion as of March 31, 2020. 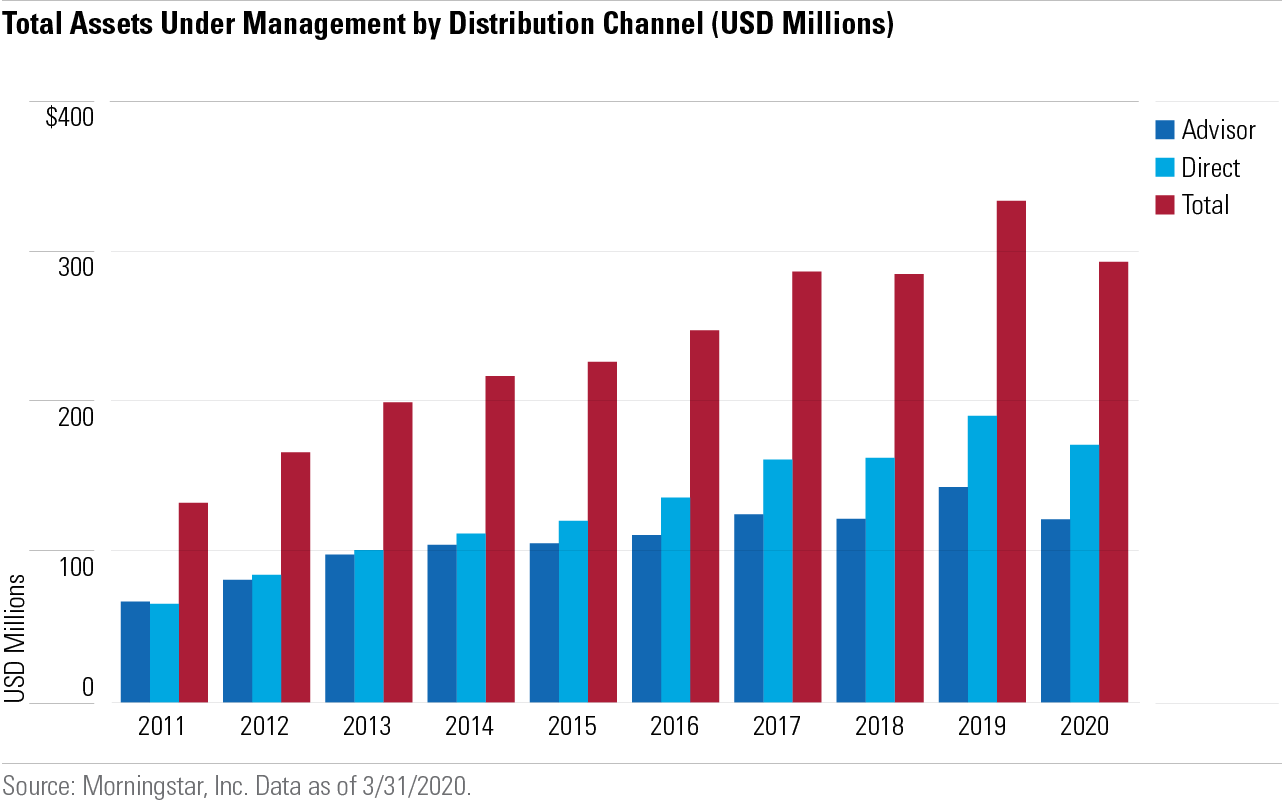 Concurrently, there has been a long-term shift away from solely commission-based advisory businesses and toward fee-based compensation. For instance, the 2019 Morningstar Survey of Advisors showed that 47% of advisors identified as fee-based, while 37% identified as commission-based. One key reason for the trend toward direct-sold plans is that advisors who have a fee-based business model have greater flexibility to choose the best plan available for their clients, regardless of the distribution channel.

As a result, cheaper, direct-sold 529 plans have become increasingly popular with these cost-conscious fee-only financial advisors. Indeed, direct-sold plans continue to drive the lion’s share of 529 asset growth: On average, Morningstar's 529 College Savings Plan Landscape report showed that direct-sold plans grew by 7.3% per year from December 2015 through March 2020, while advisor-sold plans (mostly offered by commission-based advisors) grew by only 2.8% over the same period.

Here, we take a closer look at how advisor-sold and direct-sold 529 plans have evolved in that time.

Why Are Fees for Direct-Sold 529 Plans so Much Lower?

There are a couple of reasons for this fee gap:

In light of these different fee inputs and distribution channels, under our current ratings system we determined the Price Pillar ratings of different 529 plans by comparing advisor-sold plan fees relative to one another and direct-sold plan fees relative to one another. But as advisor compensation methods have evolved, the lines between fees for the two plan types have become more blurred. Considering this, along with the increased prevalence of fee-based advisors, we will continue to evolve and improve upon our approach to evaluating 529 plan fees.

As direct-sold 529 plans become more flexible, college savers working with a financial advisor can consider all their options rather than limiting themselves to plans that pay financial advisors a commission.

Our research at Morningstar has consistently found that lower-fee investments are likely to outperform higher-fee investments over time. So, in situations where two plans’ management teams and processes are roughly equivalent, the lower-cost option has the clear edge, regardless of whether the underlying funds are active, passive, or a mix of both. Glide path designs aside, to keep up with the typically cheaper direct-sold plans, the underlying active managers commonly seen in advisor-sold plans must collectively outperform their respective benchmarks—a possible, though difficult, task.

We enhanced the methodology used to evaluate mutual funds in November 2019. A key differentiator of the updated approach is that it assigns ratings at the share-class level. Previously, we assigned the same rating to all share classes of a fund, but now a fund’s costlier share classes often receive lower ratings than its cheaper share classes. Considering this, along with the increased prevalence of fee-based advisors, we will continue to evolve and improve upon our approach to evaluating 529 plan fees.