If you had any lingering doubts about whether the gender of fund managers affects investment performance, our latest study shows that it empirically doesn’t.

Some facts and figures have stood out to us.

From 1990 to 2017, the distinct number of U.S. active equity and fixed-income funds grew from about 1,900 to roughly 8,500. Simultaneously, the number of fund manager positions increased. But for most of the last three decades, the growth in portfolio manager jobs have disproportionally benefitted men. Men have captured nearly all the newly created roles—about 85-90%. And women have failed to make significant gains.

We wanted to see if there was a rational explanation for the lack of women in the fund management industry. So in our latest study, we harnessed Morningstar's U.S. database of mutual funds and their managers to consider whether performance differences between managers is driven by gender.

To answer this, we created two datasets: one designed to track fund performance and the second designed to track manager performance. For both datasets, we applied the same industry standard performance tests: regression, portfolio-based tests, event study. As a result, we believe we have a holistic view of the impact of gender diversity on investment performance. You can find our full results in the paper “Fund Managers by Gender – Through the Performance Lens.”

Our findings: Women are just as good as men at managing funds

In our study, we find that performance does not explain the low participation rate of women in the fund industry. And the idea that men have outperformed was not supported in the data either. Plus, as is discussed further in the paper and below, we believe we can find some indication that the industry might be better off with more women at the helm of funds.

What we found about gender and fund performance differences

In our study, we tackled the hypothesis that men produce superior performance when it comes to managing funds. Using that as our framework, we expected to find that funds exclusively run by men would outperform funds run by mix-gender teams, and that funds run by women would be the least successful. Similarly, managers who are men would outperform managers who are women. However, we found clear evidence to reject this hypothesis. We tested this theory in three ways, which all point to this same conclusion: We do not find a performance difference based on a fund manager's gender.

In one of our tests, which is illustrated below, an investor who picks a fund based solely on the manager’s gender could see better results with all-female fund teams in both equity and fixed-income asset classes. 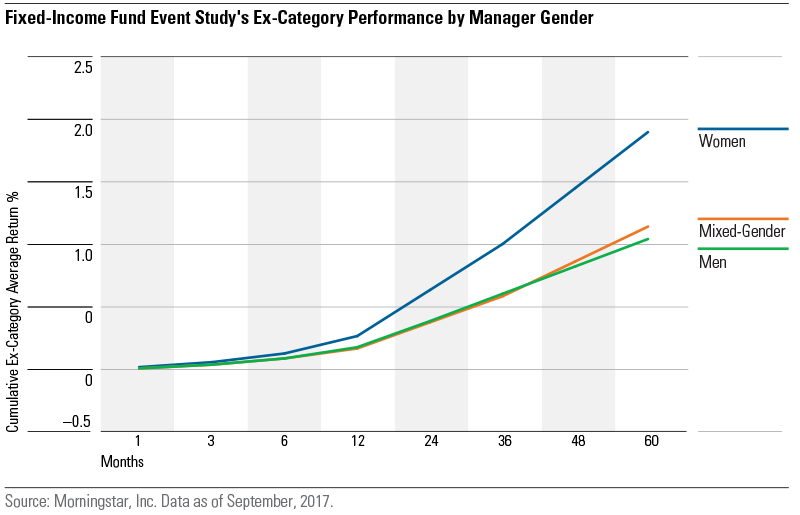 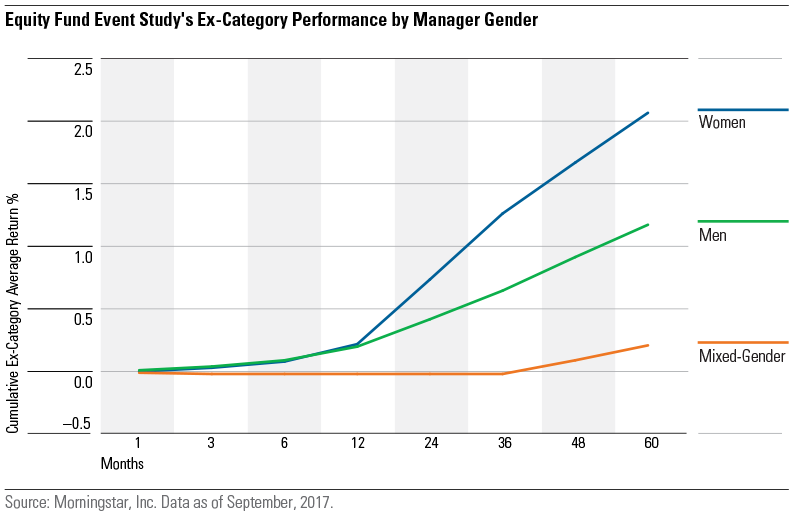 For illustrative purposes only.  For full research details, please reference “Fund Managers by Gender – Through the Performance Lens.”

What we found about gender and manager performance differences

In our study, we also controlled for certain known drivers of fund returns to evaluate this hypothesis that men outperform women. But the results showed that gender has no statistically significant difference for managers in either equity or fixed-income asset classes.

Why do we believe it’s important to look at fund manager performance by gender?

We recognize that studying fund manager performance by gender is a polarizing topic. Our goal isn’t to estimate a manager's performance potential based on gender. Rather, we wanted to see whether performance explains why the participation rate of female fund managers has declined. In effect, we are asking: Would the industry perform worse with more female fund managers? If there’s no overall persistent difference in investing with men over women in terms of fund performance, then investment skill is not a sufficient justification for the lack of women in fund management positions.

We plan to continue exploring the topic of fund management diversity—whether that research is focused on gender or educational background, such as advanced degree types or professional certifications. We hope our conclusions could be used raise awareness and to further conversations of diversity within the fund industry.

This research was conducted using  Morningstar Direct. If you’re a user,  you have access. If not, take a  free trial.

Read the full paper “Fund Managers by Gender – Through the Performance Lens.”
Get My Copy