Each year, Morningstar's team of manager research analysts evaluates the 529 investment universe and assigns forward-looking, qualitative Morningstar Analyst Ratings for 529 college savings plans based on our assessment of their investment merits. This year is pivotal, as it marks the first methodology enhancement to the ratings that debuted eight years ago. This updated rubric reflects our understanding of what drives compelling outcomes for 529 plan participants and takes into account the broader industry's evolution and rising standards.

Under the enhanced methodology, we now organize our research around four key pillars: Process, People, Parent, and Price. (In prior assessments, a fifth pillar was dedicated solely to performance, but that is now considered in tandem with the People, Process, and Parent Pillars, ensuring that performance analysis takes place as part of a broader assessment of those pillars.) Pillar-level research informs our holistic view of plans and results in the Analyst Rating for 529 plans, a five-tiered scale that, from highest to lowest conviction, includes three Morningstar Medalist designations (Gold, Silver, and Bronze), Neutral, and Negative. This year's review led to a number of ratings changes that included 12 upgrades and 15 downgrades. We also initiated coverage of three plans and ceased coverage of four.

We identified 35 best-in-class offerings, recognizing these programs with Analyst Ratings of Gold, Silver, or Bronze. College savers can have confidence in medalist-rated plans. These plans offer investment options that we expect will collectively outperform and exhibit some combination of the following attractive features across the key pillars: a well-researched asset-allocation approach, a robust process for selecting underlying investments, an appropriate set of options to meet investor needs, strong oversight from the state and investment manager, and low fees. Gold-rated plans embody most or all of these attributes, while Silver- and Bronze-rated plans sport some of these qualities but have room for improvement.

Eighteen plans earned Neutral ratings. While Morningstar analysts do not recommend Neutral-rated plans, these plans might be worth a second look for residents who qualify for additional benefits such as state income tax breaks, which don't factor into our ratings. College savers are not required to invest in their state's plan, but residents of a state with a Neutral-rated plan should consult any tax incentives they receive from their state before deciding to look elsewhere.

Eight plans received Negative ratings. Negative-rated plans have at least one considerable flaw, such as a subpar allocation approach or exorbitantly high fees, and these plans are unlikely to provide a typical 529 college savings plan participant with a compelling investment experience relative to alternatives. Accordingly, Negative-rated plans are worth avoiding.

The Valedictorians Three 529 college savings plans merit Gold ratings. These plans set the industry standard with their low costs, strong stewardship, and exceptional investment options. We upgraded the rating for Michigan's Education Savings Program in recognition of the state's long track record of first-rate investment oversight. In cooperation with investment manager TIAA, Michigan's Department of Treasury rolled out a well-designed glide path for its new target-enrollment portfolios and charges a very low fee of about 0.10% for those options, making it the cheapest suite of portfolios that we rate.

Illinois' Bright Start College Savings and Utah's my529 continue to set themselves apart. As the flexibility of 529 plans has increased, Utah's plan responded by fleshing out its lineup of fixed-allocation options, offering global diversification at varying levels of risk for savers with nontraditional timelines

This group of Gold-rated plans also hasn't fixed what isn't broken: Each plan features age-based options that remain consistent and well-reasoned. Both in-state residents and out-of-staters will be well served by any of these three plans.

Under our enhanced methodology, two plans that rated Gold in 2019 didn't quite keep pace with this year's leaders, but they certainly weren't far behind. We continue to think highly of California's ScholarShare College Savings Plan and Virginia's Invest529, but in light of the competitiveness and maturity of the 529 investment industry, our new ratings system makes it tougher to earn our highest level of conviction.

11 Plans Take Silver In addition to California and Virginia, this year's crop of Silver-rated 529 college savings plans has a few other new faces. MOST Missouri's 529 Education Plan, Pennsylvania's 529 Investment Plan, and Oregon's College Savings Plan all benefited from our increased attention to the absolute value of plan fees, which we now consider irrespective of how a plan is sold and what types of investments it uses. 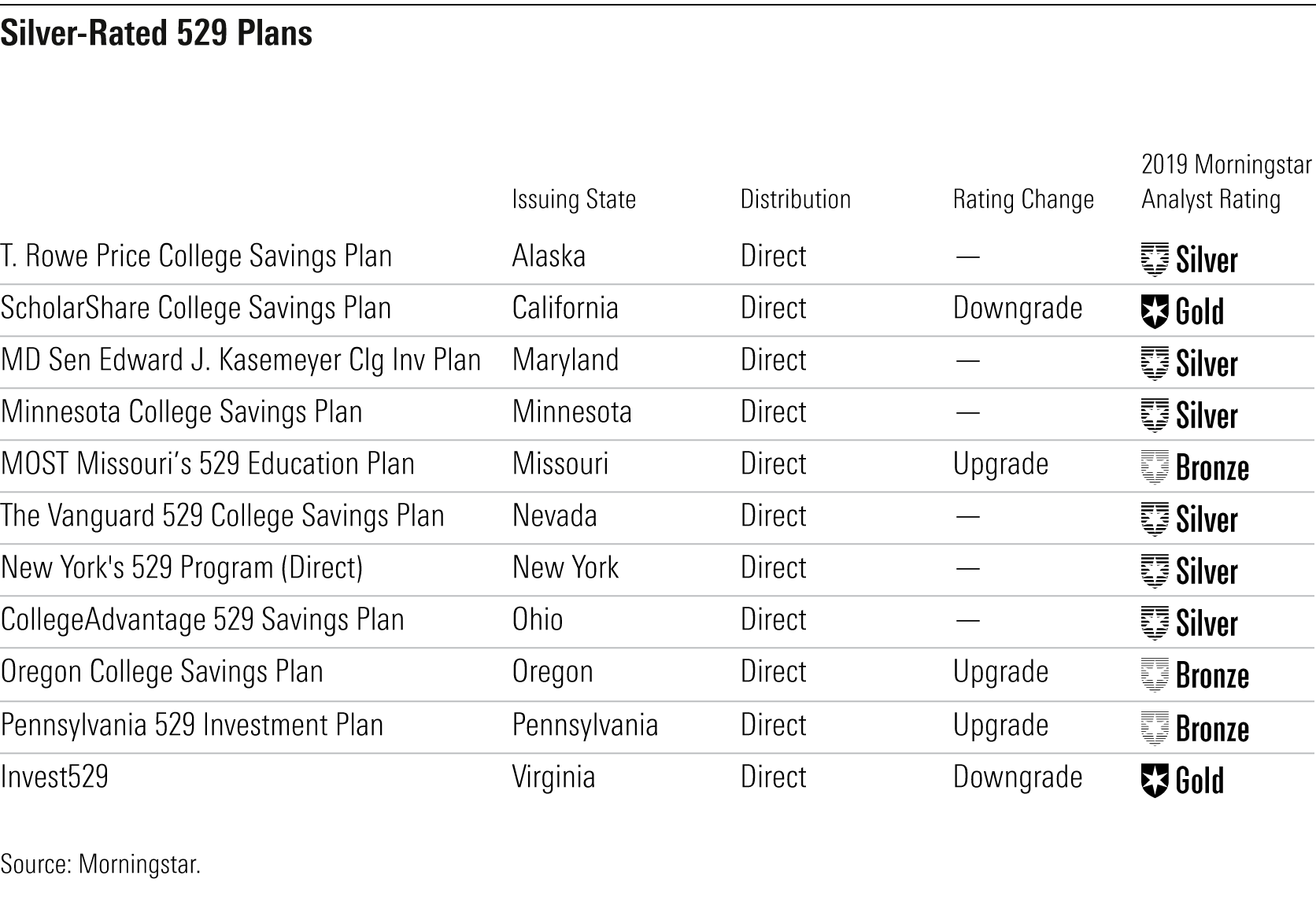 Relative to peers, Fidelity's plans--Fidelity Arizona College Savings Plan, Delaware College Investment Plan, Massachusetts' U.Fund College Investing Plan, and New Hampshire's UNIQUE College Investing Plan--all received a Bronze rating. This downgrade from Silver was underpinned by our updated approach to evaluating the People Pillar, which places more emphasis on the team that designs the lineup of money managers. While Fidelity's asset-allocation team is well resourced and seasoned, characteristics that merit an Above Average People Pillar rating, it must yet provide evidence of an insurmountable competitive advantage relative to peers, a characteristic necessary for a High People Pillar rating. Still, Fidelity has made positive enhancements to its plans over the past several years. Its index-based age-based portfolios rank among the industry's cheapest, and it recently replaced the most expensive age-based options with a new blended track that combines active and passive management, all contributing to its medalist finish.

A Blue-Chip Plan Brought to Bronze The industry's largest 529 college savings plan, Virginia's CollegeAmerica, joined the roster of Bronze-rated plans this year, as did with Illinois' Bright Directions Advisor-Guided 529 College Savings Plan. These two plans, previously rated Silver, received downgrades based on the fees they charge. Fees can vary considerably depending on how a plan is sold, given the practice of bundling in distribution, marketing, and service fees to certain share-class types found in plans like CollegeAmerica that are sold exclusively through financial advisors. We still have conviction in these two plans' ability to offer investment options that outperform, but these lower ratings recognize the reality that bundled costs eat directly into investors' future returns. 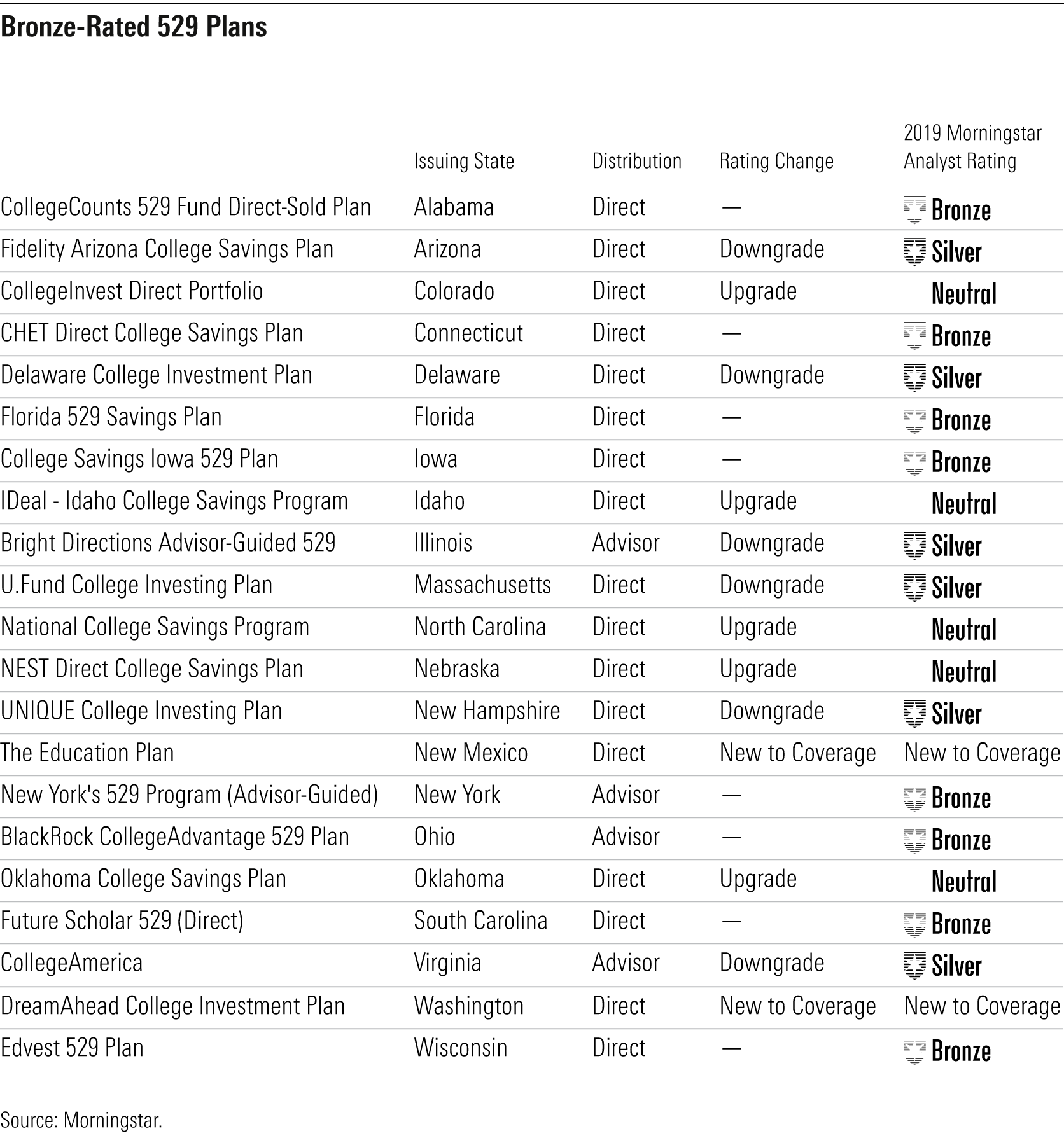 Two plans made their debut at Bronze: New Mexico's The Education Plan and Washington's DreamAhead College Investment Plan. The Education Plan underwent an overhaul in 2019 when New Mexico booted previous program manager Oppenheimer in favor of Ascensus. The benefits of New Mexico's stewardship and the industry-standard allocation process provided by Ascensus merited a recommendation. Washington's plan has been on our radar since its launch in 2018, and a deeper dive into the construction of its three risk-based target enrollment suites gave us confidence that the plan will serve Washingtonians well.

Meeting Expectations Our class of 18 Neutral-rated 529 college savings plans had the most stability, with few new entrants and many plans repeating the grade. In addition to Nebraska's TD Ameritrade Plan, two plans featuring Vanguard investments got an upgrade to Neutral from Negative. Though both plans' fees remained fairly constant year over year, North Dakota's College SAVE Plan and Arkansas' GIFT College Investing Plan stacked up better against the universe under our new approach to evaluating expenses. 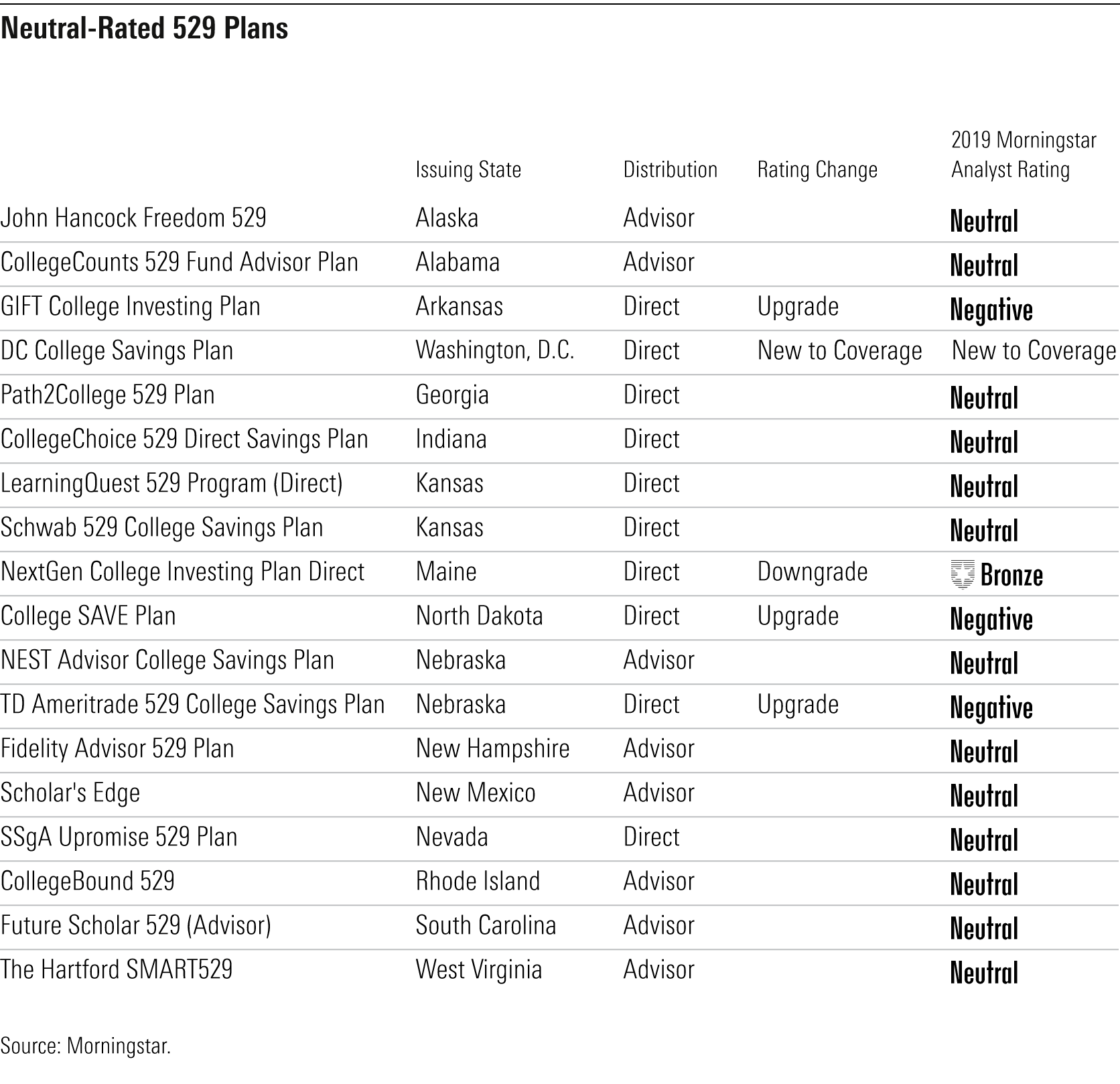 Eight Plans Flunk Out  Our enhanced methodology sets a higher standard for Neutral ratings, and six plans failed to reach that bar, receiving downgrades to Negative. All eight Negative-rated plans charge fees that investors are better off avoiding; there's little incentive for even in-state college savers to select these plans when similar fare is offered at a much more palatable price elsewhere. True, prices depend somewhat on how a plan is distributed--as mentioned above, plans that are sold exclusively through financial advisors often layer on commission fees to compensate advisors for financial advice. But as other compensation models, such as fee-based advice, become more popular, investors have more freedom to avoid these commission charges, which are often bundled into a front-end load or all-in expense ratio rather than reported as a separate line item. That makes these plans worth skipping. 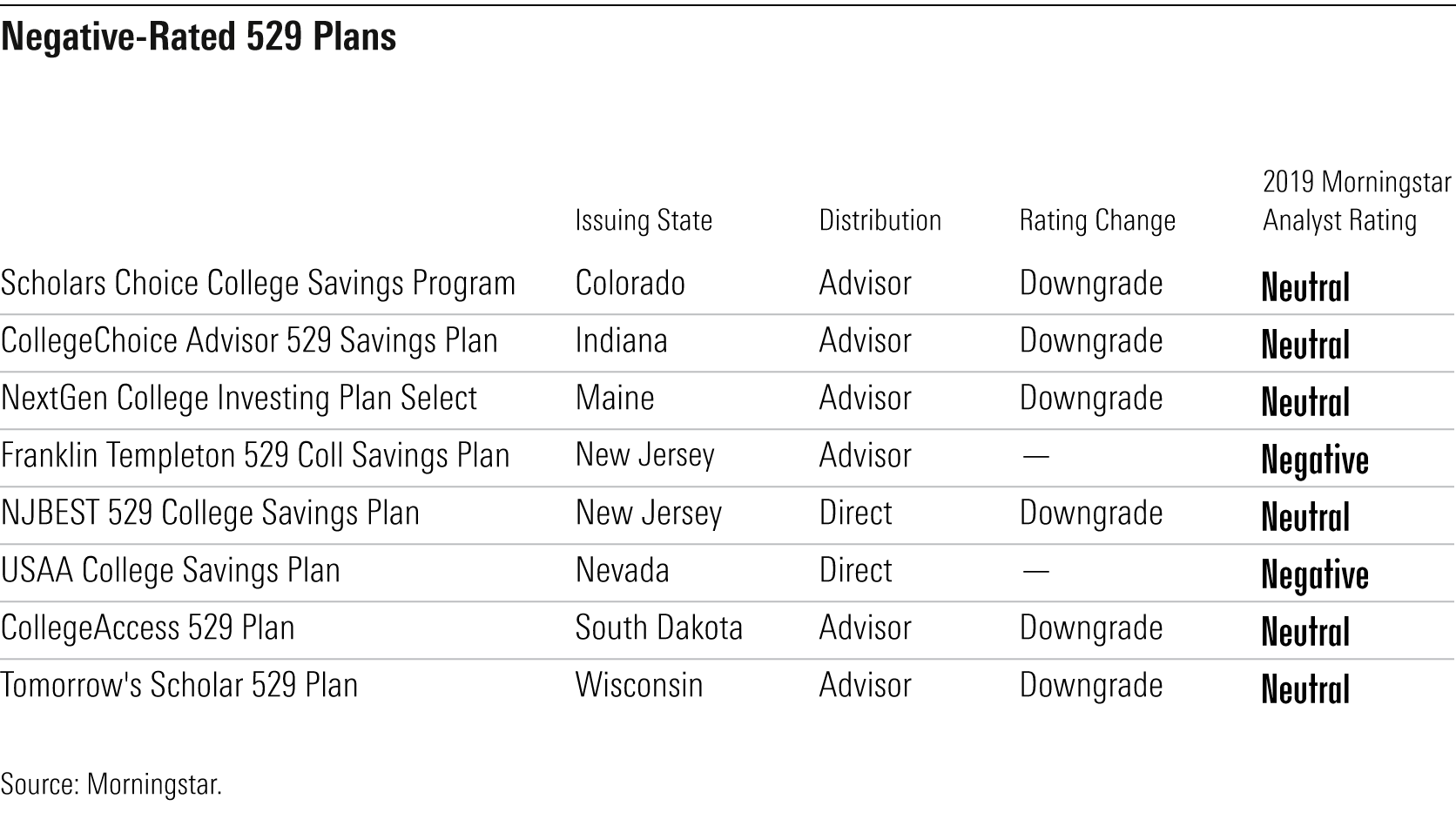 Several plans present additional challenges that should give college savers pause. For example, last year we downgraded Nevada's USAA College Savings Plan to Negative from Neutral following rapid change to the plan's investment options and the state's limited ability to review the investment changes. In July 2019, Victory Capital Holdings purchased USAA's asset-management business, including its 529 plan. After the transaction, Victory promptly added its managers to all the underlying equity funds in the plan before the state was able to thoroughly vet the changes, actions that detract from our view of its stewardship.

Morningstar analysts overrode the recommended scores for these plans for several different reasons. Nebraska is in the final stages of transitioning investment managers, bringing enough uncertainty to justify holding the plan back from higher ratings. North Dakota and Maryland offer 529 investment options that are nearly identical to another plan that receives a different score, and we felt that the other plans' (Arkansas GIFT and Alaska T. Rowe Price College Savings Plan, respectively) ratings conferred more accurate expectations for the investment strategies' ability to outperform. In Ohio's case, BlackRock's strong active managers and persistent active tactical tilts lead to meaningful differentiation from peers, resulting in a suite of options greater than the sum of its parts. Given our conviction in the People, Process, and Parent, we feel that this differentiation will surpass the plan's fee hurdle, which is still notable. Conversely, we don't expect that Indiana CollegeChoice will be able to overcome its fees given the composition of its portfolios, warranting an override.

To arrive at an overall rating, we weight the pillars as follows:

Then, an overall score is determined for each plan, using the following equation:

We will typically assign ratings according to the following scores:

Our analysts retain discretion to override these scores if they believe a unique characteristic justifies a different rating than the score suggests.

To learn more about the top 529 investments of 2020, sign up for our webinar. Register Now