Matters of sustainability are growing in prominence, as investors become more sensitive to these issues and an increasing number of companies make substantial improvements in terms of environmental, social, and governance criteria.

According to the latest edition of the Morningstar Sustainability Atlas, European countries—particularly the Northerners—lead the pack in ESG practices. This is somewhat expected, since those nations have always been ahead of the curve on this front, but a few other countries also feature exceptionally strong sustainability profiles.

The Morningstar Sustainability Atlas uses the constituents of Morningstar country indexes to examine the sustainability profiles of 46 country-specific equity markets. The company-level scores are sourced from Sustainalytics, which also powers the Morningstar Sustainability Rating™ for funds. Financial advisors and asset managers can use this data to identify countries with the greatest ESG investment opportunities and most significant risks. They also have the ability to track these countries’ ESG-related Portfolio Controversy Scores.

Here, we take a look at some of the Sustainability Atlas’s key findings.

Global sustainability scores: Finland comes out on top; China in the bottom quintile

As shown on the map below, the Nordics and eurozone came out on top of sustainability rankings. Specifically, Denmark scored highest on social criteria, the Netherlands on governance criteria, and Portugal on environmental criteria. On the other hand, China, Russia, and Middle Eastern countries assumed the lowest sustainability ratings. 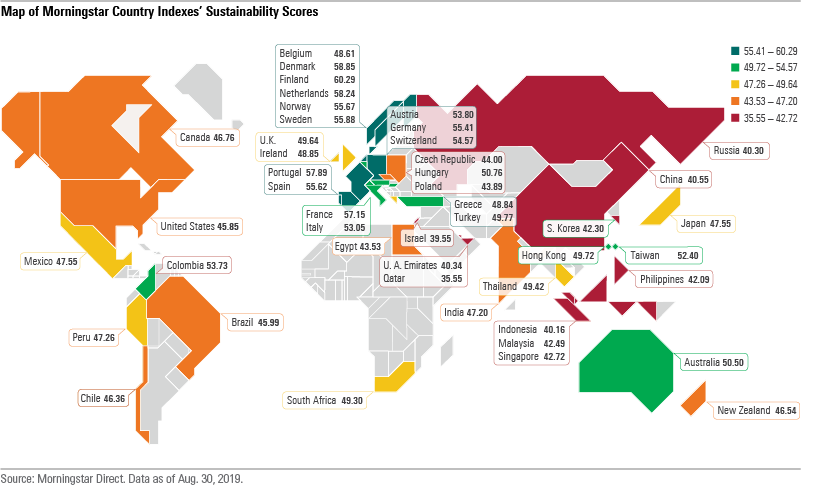 Countries with noteworthy rankings include:

Sustainalytics defines a controversy as any incident that has an impact on the environment or society, and therefore poses a risk to the responsible company and its overall sustainability performance.

The most controversy-free markets tend to be small. But for a large market—and despite the scandal involving Nissan’s chairman last year—Japan is notably light on ESG-related controversy.

The U.S. ranks in the fourth quintile of global sustainability leaders, rising one position from the previous Sustainability Atlas (from 34th to 33rd place in the global sustainability ranking). The U.S. market scores fairly well from an environmental perspective, but it also shows a significant level of controversy and poor governance scores from companies like Netflix and Amazon.

Then again, despite being the world’s second-largest carbon emitter (right after China), the U.S. boasts a low level of carbon risk due to heavy healthcare and technology weights, comprising more than 36% of the index.

Download the Morningstar Sustainability Atlas for more insights on country-specific sustainability profiles.
Get My Copy