While the performance of most major asset classes took a step back in January 2021 following a stellar 2020, investor preferences remained largely consistent. Long-term mutual funds and exchange-traded funds picked up $95 billion in new assets, marking the 10th consecutive month of inflows since the $326 billion exodus from those funds in March 2020.

Most of January's inflows again found their way to passively managed funds, which took home $55 billion. ETFs--many of which are passively managed--raked in $58 billion during the month versus $37 billion for open-end mutual funds, marking the 30th time they've had the advantage over mutual funds in the prior 36 months. 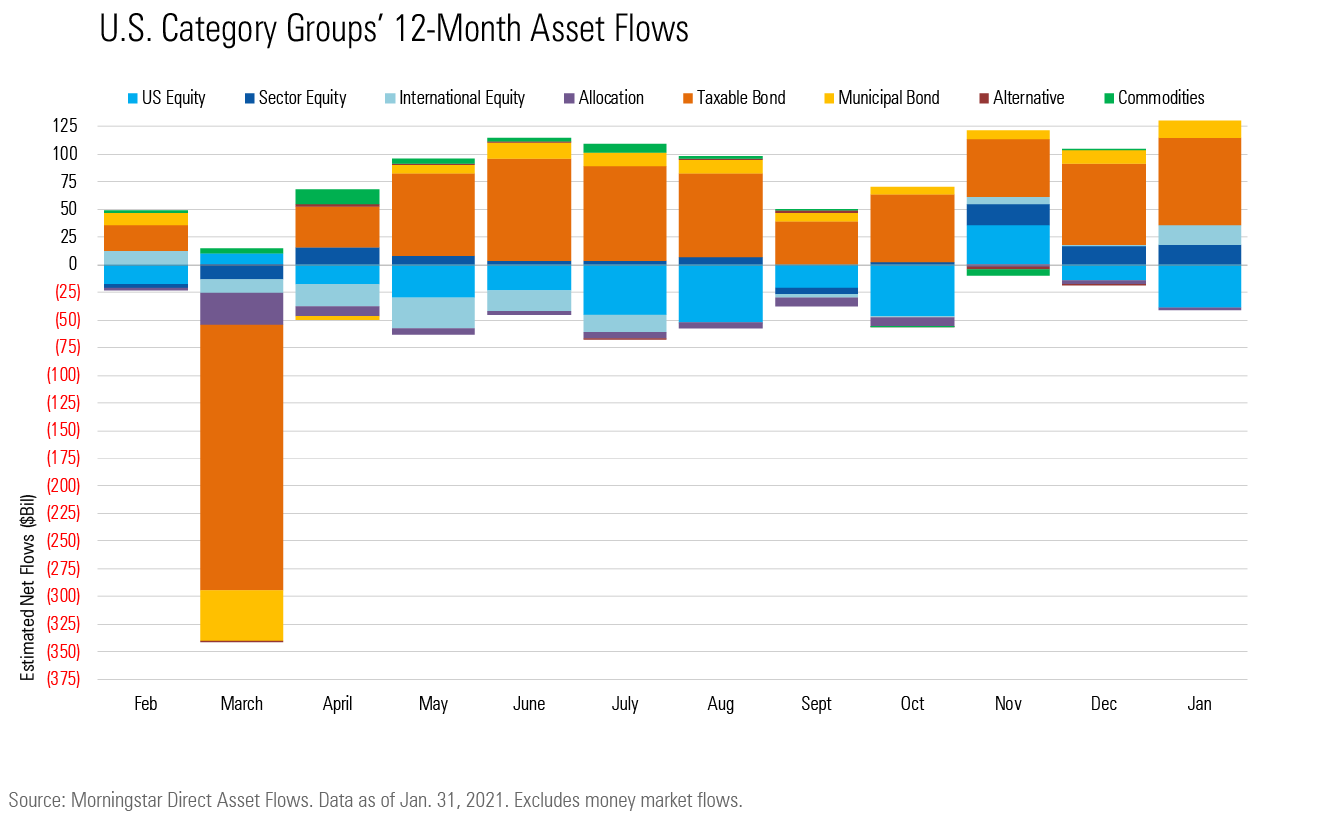 January was another big month for bond funds. Taxable-bond funds dominated, taking in $79 billion in January and $459 billion over the trailing 12 months, the most by far for any group. Investors also piled into municipal-bond funds in January as support for further government stimulus swelled. The category group picked up a record $15.9 billion. That was despite issuers pausing to consider the magnitude and impact of further aid from Washington, D.C.

U.S. equity funds experienced outflows for the 10th time in the past 12 months, giving back $38 billion in January. Nearly all of that was pinned on open-end mutual funds, which shed $36 billion. Much of that came from actively managed open-end funds, though even passive open-end funds are also seeing redemptions. Over the 10-month period from April 2020 through January 2021, passive open-end U.S. equity funds had a staggering $128 billion of outflows. 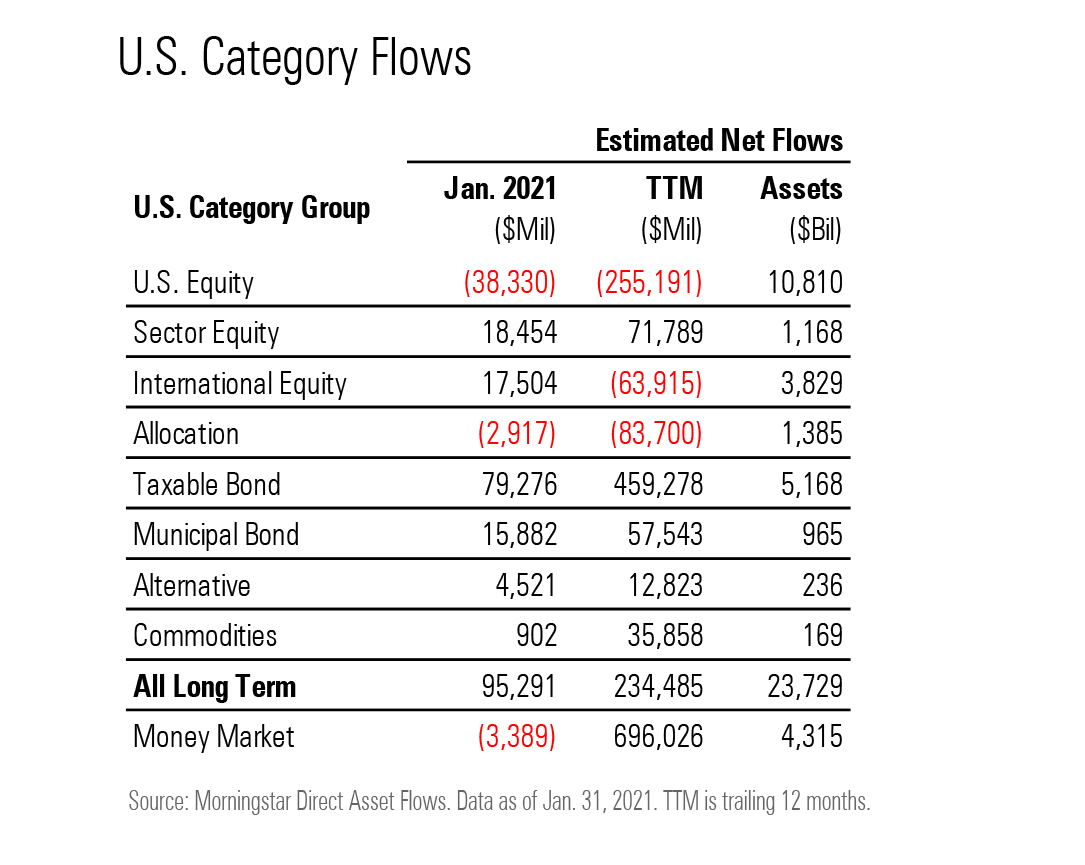 Large-cap blend and large-cap growth funds were the U.S. equity category group's outflow leaders, shedding $25 billion and $21 billion, respectively. They've seen combined outflows of nearly $190 billion over the trailing 12 months, a sum greater than any other pair of Morningstar Categories. Strong performance in these two segments may suggest that investors are rebalancing into other asset classes. On the other hand, small-cap funds gained $5.8 billion, with the small-blend and small-growth categories taking home the most inflows. While small value's $1.4 billion inflow ranked last among the three small-cap Morningstar Style Box segments, it is the only U.S. equity category with positive flows over the prior 12 months, suggesting investors haven't given up on the U.S. equity market's weakest-performing segment of over the past 10 years.

Sector-equity funds had a strong showing for the third consecutive month. They pulled in more than $18 billion in January, powered by big flows into financials and clean-energy ETFs. Financials funds took in $6.1 billion, their largest inflow since November 2016 when they raked in $9.5 billion on expectations of higher interest rates and looser banking regulations following the election of President Trump and a Republican Congress. Rising interest rates may have piqued the market's interest yet again as yields on 10-year U.S. Treasuries jumped roughly 20 basis points in January.

Within the rush to clean-energy ETFs, the biggest winner was the iShares Global Clean Energy ETF (ICLN), whose $1.7 billion inflow in January pushed its trailing one-year total to $4.2 billion--producing an astonishing 12-month organic growth rate of more than 800%. The ETF, which tracks a basket of global renewable energy companies, gained a superb 147% over the trailing 12-month period ended Jan. 31.

Vanguard, the largest U.S. fund family by total long-term assets at more than $6 trillion, led all peers with $38 billion of long-term fund inflows during January. Its taxable-bond funds took home the lion's share at $27 billion. Passive strategies, such as Vanguard Total International Bond Index (VTABX) and Vanguard Total Stock Market Index (VTSMX), gathered over 80% of the firm's total inflows, consistent with the broader trend away from active management. 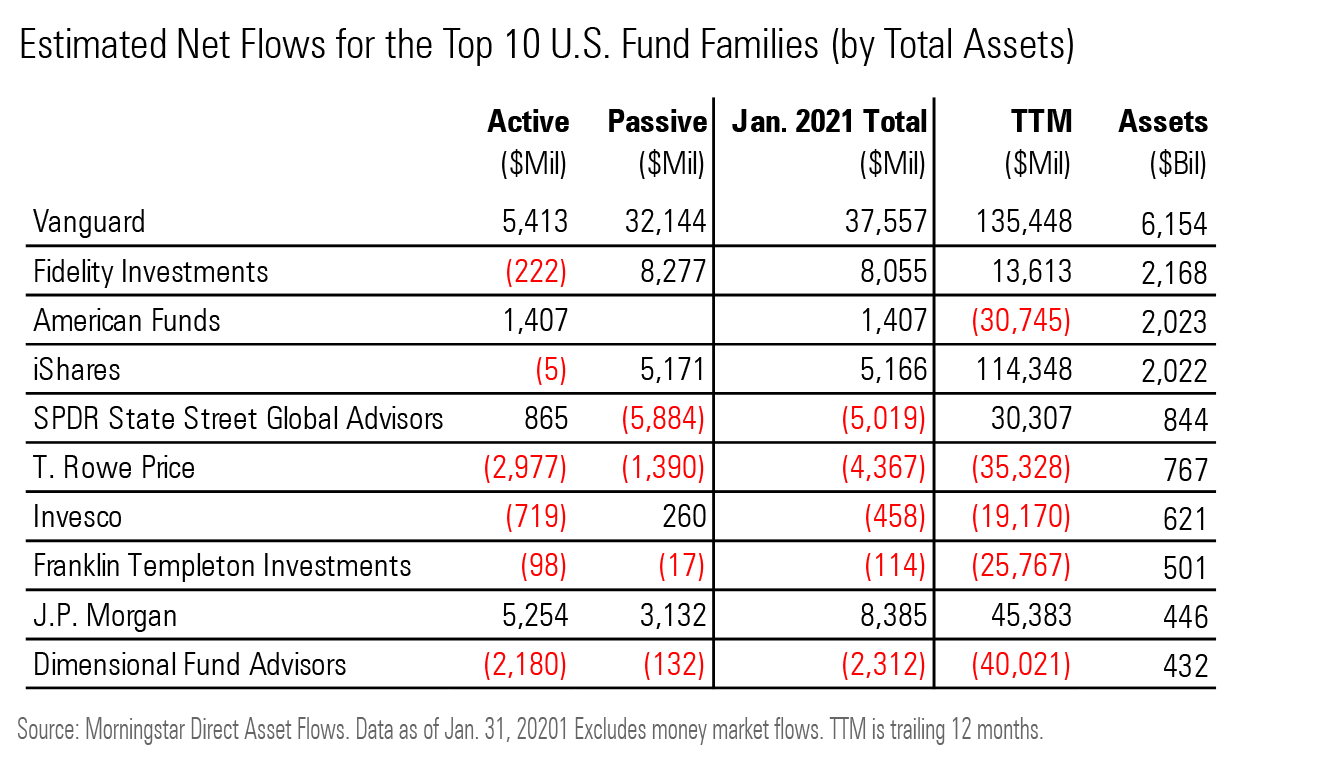 J.P. Morgan posted the second-highest inflow total at $8.4 billion, just a month following its record $9.9 billion in December. The firm's success stands out as more than 90% of its assets are housed in actively managed strategies. JPMorgan Hedged Equity (JHEQX) was one of the top attractions, taking in $1.3 billion in January. The firm's passively managed strategies also showed strength. Its recently launched BetaBuilders suite, including JPMorgan BetaBuilders Developed Asia ex Japan ETF (BBAX), contributed meaningfully to the $3.1 billion of inflows into its passively managed funds.

Note: The figures in this report were compiled on Feb. 10, 2021, and reflect only the funds that had reported net assets by that date. Artisan had not reported. Morningstar Direct clients can download the full report here.