Correction: An earlier version of this article omitted trade data from the Federal Reserve for the period prior to May 19. The corrected article reflects that additional data, as well as new data released by the Fed for the period of June 20-29.

The exchange-traded fund market has a big new investor: the Federal Reserve.

As part of the Fed’s efforts to support the U.S. economy, the central bank launched a program to purchase investment-grade corporate-bond ETFs and high-yield bond ETFs, alongside purchases of individual bonds.

Based on the data the Fed has thus far made public, these purchases have accounted for nearly a fourth to more than half of the weekly flows into investment-grade corporate-bond ETFs. At the individual fund level, the Fed has been responsible for more than 20% of money going into nine corporate-bond and high-yield ETFs, including roughly 70% of flows during a seven-week period for the $6.15 billion SPDR Portfolio Short Term Corporate Bond ETF (SPSB).

Announced back in March, the Fed kicked off its ETF purchases in May through what is officially known as the Secondary Market Corporate Credit Facility. The initial allocation to the SMCCF was $250 billion. Starting May 19 and through June 17, the most recent data available, the Fed bought $5.29 billion worth of ETFs.

The Fed’s ETF purchases have come at a time of heavy inflows into investment-grade and high-yield bond bonds broadly and ETFs in particular. To some degree, the Fed’s announcement that it would be supporting the credit markets appeared to help investors feel more comfortable with the risks of corporate debt, having set records for withdrawals from corporate-bond funds during March.

The Fed's purchases have been heavily concentrated among investment-grade bond ETFs and much less so among high-yield bond ETFs.

In comparison with the overall pace of flows, the Fed’s purchases have been material but relatively small, accounting for 12% of high-yield ETF flows.

However, when looking at investment-grade ETFs, the Fed’s purchases comprised more than twice that percentage of flows at 28%, ranging from 14% to 78% of the total weekly market’s flows since the program began.

At the individual ETF level, in several cases, the Fed’s purchases also comprise a significant portion of inflows.

The following table is based on the data disclosed by the Fed showing its purchases and trade dates. The total for each fund during the seven-week period was then compared with the overall net flows for the ETFs for the same period.

Topping the list, the Fed’s purchases comprised 70.3% of the flows into SPSB and 62.9% of flows into SPDR Portfolio Intermediate Term Corporate Bond ETF (SPIB).

Of course, the percentage of flows is somewhat related to the overall investor interest in individual funds. IShares iBoxx $ High Yield Corporate Bond ETF (HYG) had $6,038 million in flows from the Fed alone–more than 14 other ETFs–but that equaled just over 4.6% of flows. 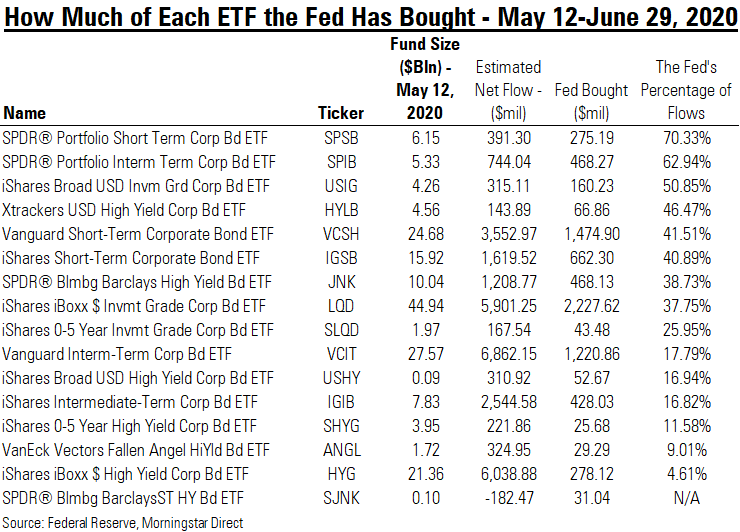 As a result of the Fed’s purchases, it now ranks as a top 10 holder of many of the ETFs where it has been acquiring shares. The table below contains estimates based on the most recently available ETF ownership filings, which in most cases was as of March 31. As a result, the ranking could be different as of the date of the Fed’s purchases in May and June. For most of the ETFs, the largest designated holder was a brokerage firm on behalf of their clients.

Based on these estimates, the Fed would be a top five holder in nine of the 16 ETFs, including ranking as the number two holder in Vanguard Short-Term Corporate Bond ETF (VCSH), LQD, and IGSB. 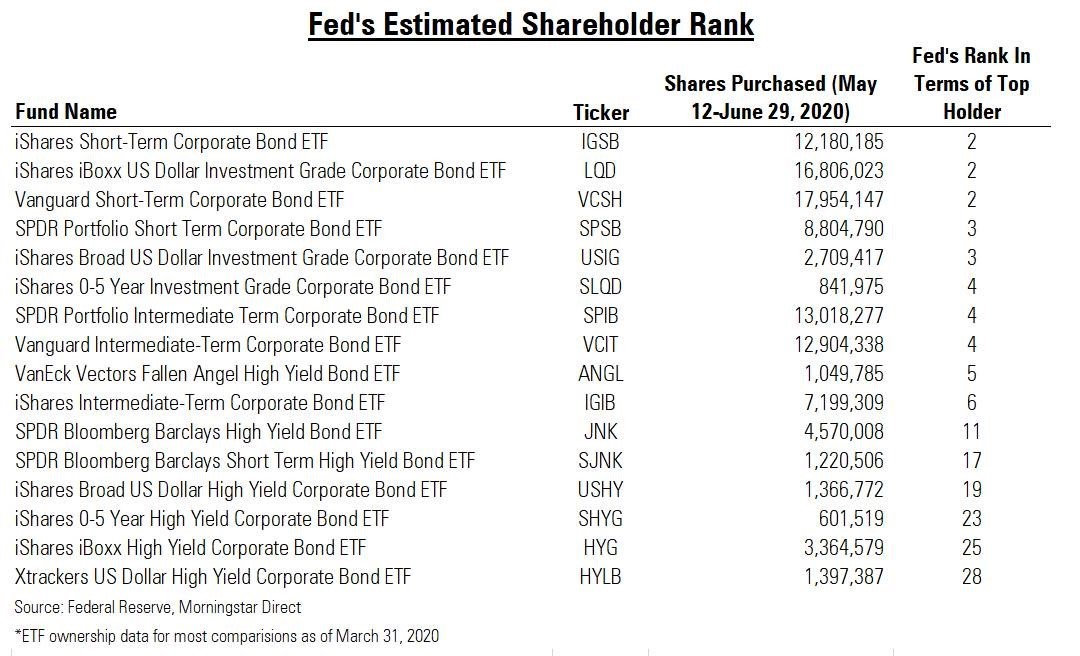 At the fund company level, iShares ETFs have taken the largest share of the ETF purchases, at $3.9 billion in flows. (BlackRock acts as the investment manager for the SMCCF; it credits the SMCCF for any management fees or securities-lending income that it would earn from iShares ETFs held in the facility.) At the bottom of the list, VanEck saw $66.9 million in ETF purchases by the Fed. 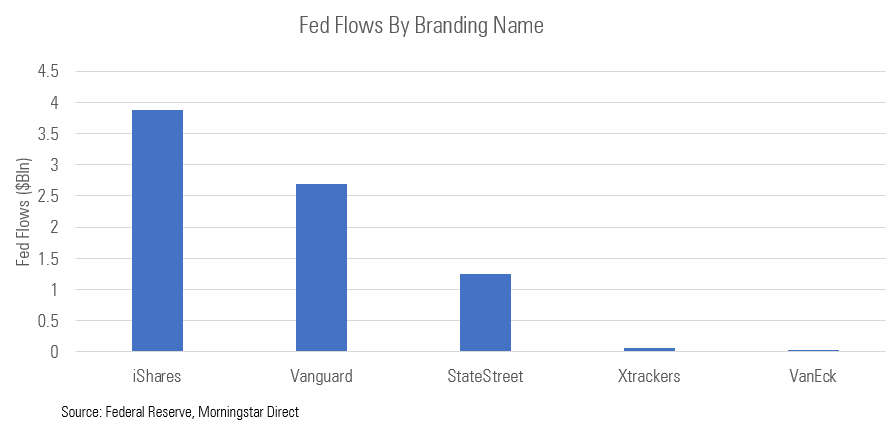