Which stock funds have done a better or worse job of protecting investors in the brutal sell-off of the last three weeks?

For one way to answer this question, we screened for funds in Morningstar Direct using our down-capture measure, which assesses how a fund's share-price decline compares with the fall in the Morningstar Category benchmark.

There were some common denominators. Among winners, cash was no longer trash. It provided a meaningful cushion against the broad-based market swoon. The funds whose shareholders suffered the most tended to be heavy in energy stocks or had the misfortune to be caught holding travel and entertainment names.

While a downturn such as that seen since Feb. 19 may ultimately be contained, performance in these kinds of markets can have a ripple effect. Over the long term, funds with the best track records often turn out to be those that avoid the worst of a big downdraft. 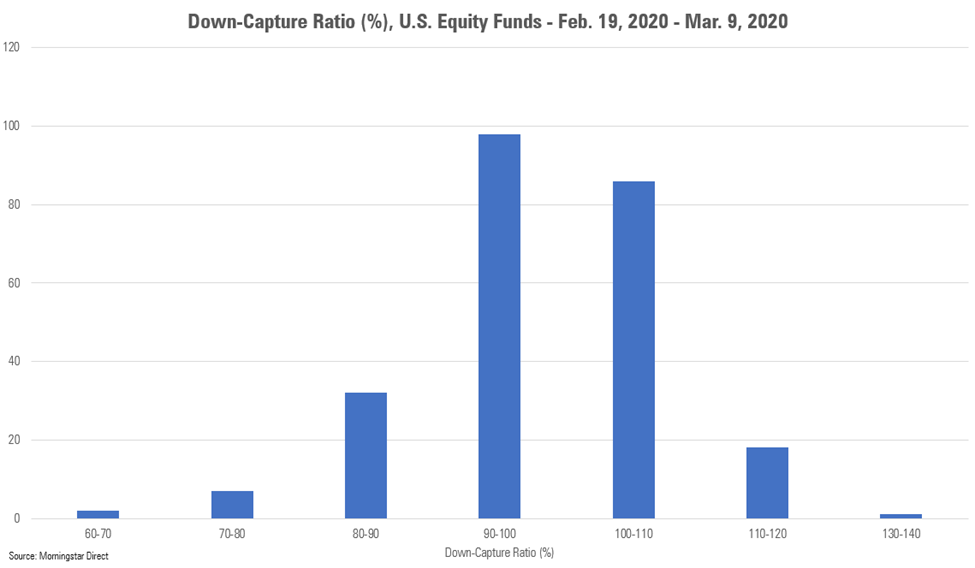 Among the funds that ranked the best for down capture are three value funds, notable news for a category that has been struggling for years.

“The at-a-glance explanation has to do with sitting on about 13% cash as of year-end 2019 (and he’s been as high as 20% in recent quarters),” said Tony Thomas, Ph.D., senior manager research analyst at Morningstar. “A deeper explanation is that the manager, Charlie Dreifus, tends to avoid heavily indebted companies. He’s long been concerned about leverage and the availability of cheap money. As we saw Monday with the leveraged oil companies, a stock can plummet when there’s doubt about a company’s ability to pay its bills,” Thomas said.

By way of contrast, when looking at February’s returns, where stocks rallied in the first half of the month and then slid quickly in the second half, growth funds populated the list of U.S. stock funds with the best down-capture scores.

At the opposite end of the spectrum were funds that captured more than 100% of their benchmark's downside—in other words, fell further than the index.

Oakmark has two funds listed in the bottom five: Oakmark Select Investor (OAKLX) and Oakmark Investor (OAKMX) both delivered down-capture ratios of 120% while also having negative 26% returns as well.

“Hotchkis and Oakmark were really in the market’s crosshairs,” said Russel Kinnel, director of manager research for Morningstar. The most recent portfolio data shows Hotchkis has had big energy weights, and was overweight financials and underweight healthcare. Oakmark Select was significantly overweight financials, had a heavier weighting in energy than most value funds, and was underweight healthcare.

International Equity Similar to the U.S. equity funds, the international equity funds saw down-capture ratios between 90% and 120%, albeit with a more-uniform distribution. 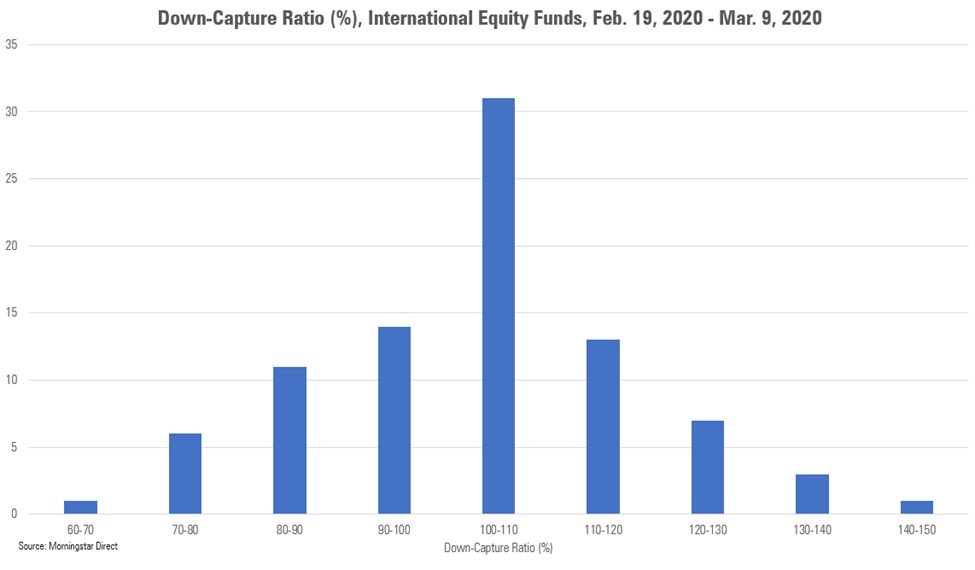 However, unlike U.S. stock funds, a broader range of categories was at the top of the list for international stock funds when it came to the best down-capture readings.

Leading the way was Matthews Asian Growth and Income Investor (MACSX) with a down-capture ratio of 69.5%. Bill Rocco, senior fund analyst who covers the fund, noted, “Thanks to the relative resiliency of its dividend-paying stocks, preferred stocks, and convertible bonds, as well as its relatively conservative geographic exposure—plus the quality of its managers’ security selection—this fund generally holds up well during sell-offs.”

Posting the second-best down-capture ratio at a 70.7% was First Eagle Overseas (SGOVX), a fund that has beaten 97% of its peers over the last 10 years. As of the end of 2019 (the most recent data available) First Eagle had nearly 13% of its portfolio in cash, 10% in gold bullion, and 14% in gold-related investments overall.

FPA International Value (FPIVX) was the fourth-best performer of the group with a down-capture ratio of 71.6% and a negative 12.22% return during the sell-off. The fund—known for its defensive posture—had 35% of the portfolio in cash at year-end, the most recent available data. Dan Culloton, director of equity strategies at Morningstar, noted, “Lots of cash (helped), for sure. Also not owning any energy and holding only one bank—Allied Irish Bank—also has helped. It looks like the sell-off has hit energy and financials the hardest among the MSCI ACWI ex-USA sectors.” In addition, Culloton said the fund likely benefited from not owning any basic materials stocks.

At the bottom of the list are all Gold-rated funds that fall into large-cap categories. The worst performer in the international stock fund category was Oakmark International Investor (OAKIX) with a 146.2% down-capture ratio.

Kinnel noted that although Oakmark did not have a lot of energy exposure, the fund did have a big stake in industrials that likely contributed to its losses.