What’s the best way for a company to return excess cash to shareholders? On one hand, dividends are straightforward and have centuries of history on their side. Share repurchases, on the other, give a company more flexibility but can be mistimed or borne of questionable motives.

Whatever one’s view, dividends vs. buybacks is a false dichotomy. Many companies today engage in both. The rising prominence of share repurchases have fundamentally altered market dynamics, requiring investors to think about yield more expansively.

The Morningstar U.S. Dividend and Buyback Index represents payout to shareholders at the market level, reflective of a new investment paradigm. In “ Total Shareholder Yield: Indexing Based on Both Dividends and Share Buybacks,” we explain how the index widens the opportunity set and displays characteristics attractive to income investors as well as those focused solely on total return.

Total shareholder yield: A new investment paradigm that includes both dividends and buybacks

There’s a reason that the broad U.S. equity market has been yielding below 2% for most of the past decade, down from its historical range of 3%-6%. Buybacks, in which a company uses cash to repurchase its own shares, have eclipsed dividends as a means of returning cash to shareholders. Repurchases that result in a decline in outstanding shares leave remaining shareholders with a larger ownership stake.

Companies have elected to buy back their own shares for a variety of reasons, including the removal of regulatory hurdles and the flexibility it affords compared with dividends. Whereas the market punishes dividend cuts, buybacks can be conducted opportunistically.

In “ The Supply of Stock Returns: Adding Back Buybacks,” Morningstar’s Philip Straehl and Yale School of Management’s Roger Ibbotson argue that the rise of buybacks renders obsolete measures of market yield and methods of valuation that rely on dividends alone.

The market evolution depicted on the chart below reveals the importance of leveraging a total payout model that considers the supply of both dividends and buybacks. When an investor selects companies that are returning profits in the form of dividends, share repurchases, or a combination thereof, it expands the selection universe. 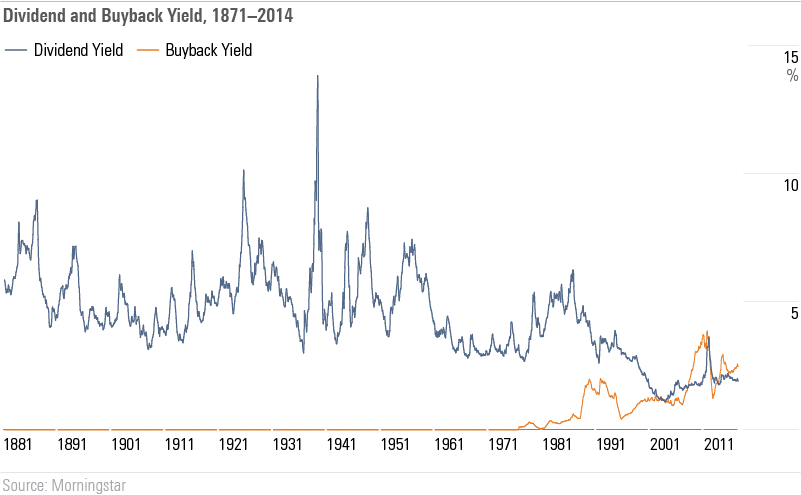 Indexing based on total shareholder yield: dividends and buybacks

The Morningstar U.S. Dividend and Buyback Index is predicated on the total shareholder yield concept. The index is designed to be comprehensive in nature and holds several hundred constituents that are paying dividends and/or conducting net buybacks.

From the perspective of dividend yield alone, the index is consistently above market. Its trailing 12-month yield at the end of 2019 stood at 2.37%, versus 1.75% for the Morningstar U.S. Large-Mid Cap Index. Most of the index’s constituents do pay a dividend, whereas the overall market includes many nonpayers. That said, investors looking to maximize yield will be disappointed.

Those who remember that short-term income can come at the expense of long-term total return, however, will find many attractive qualities in the index. Companies in the Morningstar U.S. Dividend and Buyback Index tend to be:

Investors’ long-running love affair with dividends is understandable. But the reality is that regular cash payouts have declined in importance as a means of returning cash to shareholders.

Dan Lefkovitz is a strategist for Morningstar's Indexes product group.

For more about how the index incorporates both dividends and buybacks, download our paper.
Get My Copy