Last year, investors paid an average 0.52% expense for funds, as measured by the asset-weighted average expense ratio of roughly 25,000 U.S. open-end mutual funds and ETFs. This marked an 8% decline from 2016, which is the largest year-over-year decline that we've recorded since we began tracking this data in 2000. 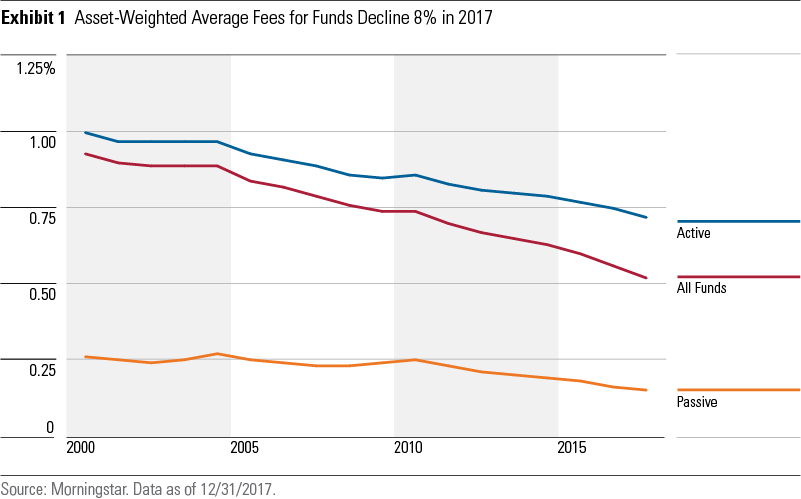 We estimate this 8% decline translated into a $4 billion savings to investors in 2017. This fee decline is a big positive for most investors because fees compound over time and can diminish returns.

Below, we highlight some key takeaways from this year’s fund fee study.

4 learnings about trends in fund fees

Read our methodology for calculating the Morningstar Fee Levels used to rank fund fees, and read the full guide for further information on the study. Please see below for important disclosure.

Read the full version of our latest U.S. fund fee study.
Get My Copy

All investments involve risk, including the loss of principal. There can be no assurance that any financial strategy or investment vehicle will be successful.  Past performance does not guarantee future results.

The information, data, analyses and opinions presented herein do not constitute investment advice; are provided solely for informational purposes and therefore are not an offer to buy or sell a security; and are not warranted to be correct, complete or accurate. The opinions expressed are as of the date written and are subject to change without notice. Except as otherwise required by law, Morningstar shall not be responsible for any trading decisions, damages or other losses resulting from, or related to, the information, data, analyses or opinions or their use. The information contained herein is the proprietary property of Morningstar and may not be reproduced, in whole or in part, or used in any manner, without the prior written consent of Morningstar. Investment research is produced and issued by subsidiaries of Morningstar, Inc. including, but not limited to, Morningstar Research Services LLC, registered with and governed by the U.S. Securities and Exchange Commission.​