A seesawing stock market over the past few months provided a litmus test for equity funds that like to hold hefty cash stakes relative to their peers. While a nearly 11-year bull market, historically low interest rates, and advisors’ desire to control their clients’ asset allocations has kept most domestic strategies’ cash levels to 2% or less, that isn’t true of all funds.

Before the coronavirus sell-off accelerated, 90 long-only U.S. equity funds out of about 1,700 had at least a 10% combined stake in cash and bonds at some point between year-end 2019 and Feb. 29, 2020. The group was otherwise pretty heterogenous. It spanned all U.S. equity Morningstar Categories and included funds like Frank Value (FRNKX), which had only about 25% of its assets in stocks at year-end 2019, as well as First Trust/Confluence Small Cap Value (FOVIX), whose 9.45% cash stake in February 2020 narrowly rounded up to 10%.

An examination of how these funds fared relative to their category indexes in both 2020’s sudden plunge and the partial rebound through April 17 shows cash helped many protect on the downside, and over the whole period most outperformed. A select group even won on the way down and up. Yet a closer look at this group raises questions about some, and in others highlights the outsize role that luck can play in short-term results. Most of the funds in the sample with a Morningstar Analyst Rating of Bronze or higher acquitted themselves quite well.

Downside Protection Spurs Outperformance Exhibit 1 shows the peak and trough periods used to stress-test each fund versus its style-specific index. Rather than using the same dates, the performance periods instead pick each index’s individualized peak prior to the coronavirus bear market, its trough, and its subsequent peak. This approach has the advantage of showing how different market segments have behaved. The Russell core and growth benchmarks, for example, each hit their post-coronavirus highs on April 17, the last market close included in this study, while the Russell value benchmarks reached their highs on April 9. 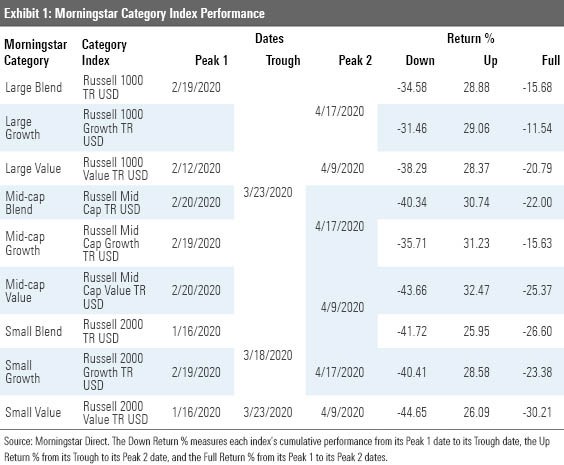 Exhibit 2 provides the results of the stress test. Thanks in part to their hefty combined stake of cash and bonds, nearly three fourths of the funds (67 of 90) held up better than their relevant style index in the down market. While they had less success in the up market, more than two thirds (50 of 90) outperformed over the full period. These results show the importance of resilience in navigating volatility, something that has been easy to forget in the decade-plus bull market preceding the coronavirus pandemic. 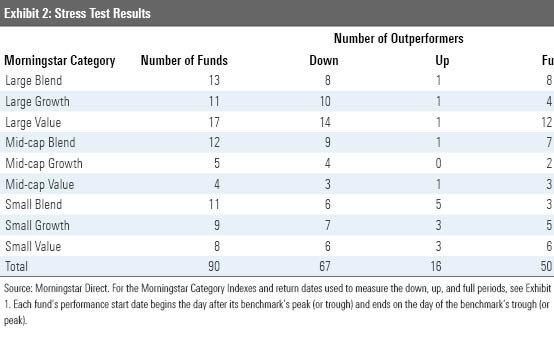 Beware of Short-Term Wonders Of the 90 funds, only five outperformed their style index both on the way down and up. Exhibit 3 displays these short-term wonders along with the degree to which they outperformed in each period. A closer look, however, raises questions about each fund. Past performance may not be indicative of the future. 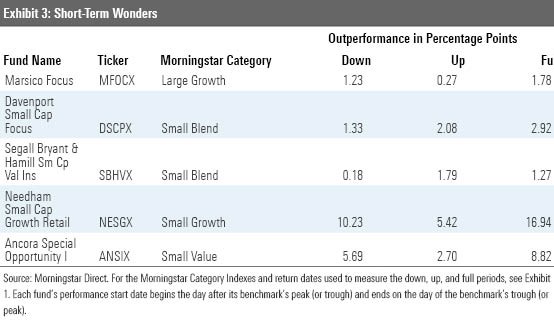 The two best performers are also probably the least likely to repeat. In September 2019, Needham Small Cap Growth (NESGX) was a $40.9 million mutual fund with 11.4% of its assets in cash. Thanks to $81 million of inflows over the next three months, its cash stake ballooned to 54.8% at year-end 2019. With another $10.4 million of net inflows in 2020’s first quarter, the fund went on a buying spree that included adding 19 new positions to what became a 59-stock portfolio. Well-timed fund flows helped its outperformance.

Marsico Focus (MFOCX) cut its Facebook (FB), NVIDIA (NVDA), and Salesforce.com (CRM) positions to raise its cash level from 2.3% in January to 13.6% in February. The fund’s trailing 15- and 20-year results, however, remain mediocre. Plus, longtime manager Thomas Marsico is at an advanced stage of his career and personnel turnover at his eponymous firm has been a problem, heightening succession concerns.

Davenport Small Cap Focus and the Segall strategy are intriguing, but their investment teams have relatively short track records at these funds--fewer than six and seven years, respectively. This is the first bear market they’ve navigated. 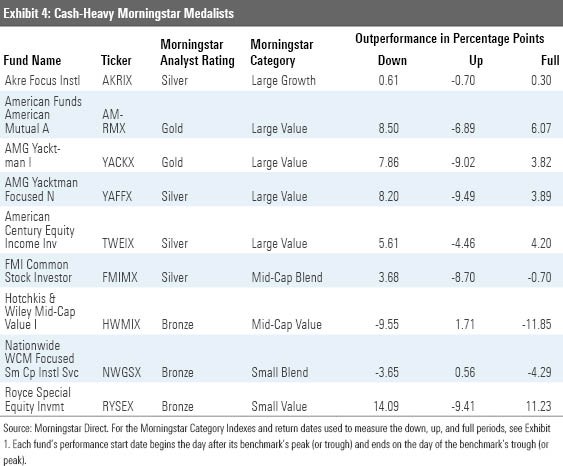 The underperformers deserve first mention. Even considering its tendency to struggle in downturns, deep-value offering Hotchkis & Wiley Mid-Cap Value’s (HWMIX) results disappointed. A double-digit energy overweight did the most damage, but a hefty financials weighting hurt, too.

Nationwide WCM Focused Small Cap (NWGSX) and FMI Common Stock (FMIMX) both entered 2020 with overweights of around 20 percentage points versus their respective style benchmarks in economically sensitive industrials names. That, plus their value leanings, hurt, though in different ways as Nationwide struggled in the downturn and did well in the rally, while it was the opposite for FMI Common Stock. Its much smaller average market cap also stung, as larger companies tended to fare better than smaller ones.

Five of the six outperformers burnished their reputations for losing less in downturns. American Funds American Mutual (AMRMX) and American Century Equity Income (TWIEX) both major in stable dividend-payers and include other income-producing securities, such as bonds for American Mutual, and convertible bonds and preferred shares for American Century. American Mutual also had a top-10 position in Gilead Sciences (GILD). Gilead’s shares gained 9.5% over the period measured, thanks in part to the promise its drug remdesivir might hold for combating the coronavirus.

The preference of comanagers Stephen Yacktman and Jason Subotky for cash-rich companies with modest debt, combined with their willingness to hold cash themselves, helped AMG Yacktman (YACKX) and its more concentrated sibling AMG Yacktman Focused (YAFFX) hold up much better than the Russell 1000 Value Index in the downturn. That was a recipe for success over the whole period, as it has been over the strategies’ lifetimes.

Finally, Akre Focus (AKRIX) nearly managed to outperform the Russell 1000 Growth Index not only in the down market but also in the up market. That’s impressive given that this concentrated portfolio had no exposure to technology titans like Microsoft (MSFT). Manager Chuck Akre and his comanagers have never paid much heed to benchmarks. Instead, they prefer to focus on the select few companies that can consistently compound their economic value per share at an above-average rate. They also tend to keep a double-digit cash stake, which allows them to buy shares of compounders in bulk when they go on sale. The fund’s up-market performance suggests they may have done that recently.

Alec Lucas has a position in the following securities mentioned above: FMIMX, GILD. Find out about Morningstar’s editorial policies.