In January, Morningstar manager research analysts affirmed the Morningstar Analyst Ratings of 92 funds and six target-date series, upgraded the ratings of seven funds, downgraded the ratings of one fund and one target-date series, and assigned new ratings to three funds. Below are some of January’s highlights, followed by the full list of ratings changes. Upgrades  Fidelity Small Cap Discovery (FSCRX) was raised to Silver from Bronze because of increased confidence in new lead manager Derek Janssen. Janssen joined former lead manager Chuck Myers on  Fidelity Small Cap Value (FCPVX) in 2013 to get up to speed on the process and portfolio before becoming sole manager there in 2015. Since then, Janssen has posted benchmark-beating risk-adjusted results on that fund. In a similar fashion, Janssen joined Myers on this fund (closed to new investors) as a comanager in 2016 and assumed the lead role in early 2017. Myers stepped off here at the end of 2017. Janssen plies a similar sector-neutral, Buffett-inspired approach, which emphasizes valuations and margin of safety and pays more attention to quality than Myers does. Janssen’s approach had to adjust to a new benchmark and a larger asset base here, but his logical process and history of successfully navigating a manager transition instill confidence.  Vanguard US Value (VUVLX) was bumped up to Silver from Bronze for its reasonable stock-picking approach and extremely low costs. Managed by Vanguard’s experienced quantitative team, the fund screens for stocks that score well on five factors--valuation, growth, quality, momentum, and management decisions (such as stock buybacks)--relative to peers. The momentum factor should help the fund pick up on real-time changes, like an abrupt CEO departure. The fund is benchmarked to the Russell 3000 Value Index and has more of a smaller-cap bias than most large-value peers. Stock-picking has been strong. Plus, the fund gets a big head start from its 0.23% expense ratio, which is cheaper than the most actively managed rivals as well as the average strategic-beta exchange-traded peer.   American Funds Intermediate Bond Fund of America (AIBAX) was upgraded to Bronze from Neutral because of its improved resources and hemmed-in profile. Capital Group has taken steps to strengthen the fund’s took kit since its financial-crisis struggles, such as adopting better risk systems and implementing more-robust research coordination. Despite some management shuffles, the fund’s duration is kept close to its Bloomberg Barclays U.S. Government/Credit 1-7 Year Ex Baa Index benchmark, which is a year or more longer than the typical short-term bond peer, translating to greater interest-rate risk. However, the fund has a more conservative stance on credit risk, with most holdings rated A or higher. The result is a predictable profile that lags peers when risk-on fervor is high or interest rates climb (as in 2016-17) but shines in periods of risk-off sentiment and low interest rates. Combined with an attractive price tag, this fund is a compelling option.  Downgrades  The Principal LifeTime series (PTTIX) was dropped to Neutral from Bronze, after management made a slew of recent changes that appear to come from peer group alignment and performance-chasing rather than sound investment merit. For example, the managers reduced the series’ exposure to REITs in late 2016 and shifted to a U.S. REITs fund to be in line with peers. Meanwhile, lead manager Jeff Tyler announced that he’d retire in March 2018, but the series' team-based approach should help alleviate the impact of his departure. The series' asset-class diversification still has some appeal, as three globally diversified funds provide exposure to asset classes uncommon among target-date peers, such as timber and master limited partnerships. Esoteric areas may help reduce volatility but also add to the series' cost.  New Ratings  Natixis Oakmark International's (NOIAX) strong team and distinctive process contributed to an inaugural Silver rating. David Herro has managed this fund since its 2010 launch and has steered the identically managed Gold-rated  Oakmark International  (OAKIX) to a superb record since its 1992 inception. A longtime comanager retired in 2016, but Michael Manelli, another firm veteran and seasoned comanager, picked up the mantle. The team employs a long-standing approach of buying companies that trade at steep discounts to their estimated prospects. Although not limited to traditional value stocks, the fund has had a value tilt of late, including a hefty stake in financials that has stoked volatility. Nevertheless, since-inception performance has been strong on a total and risk-adjusted basis. Above-average fees are disappointing, though. 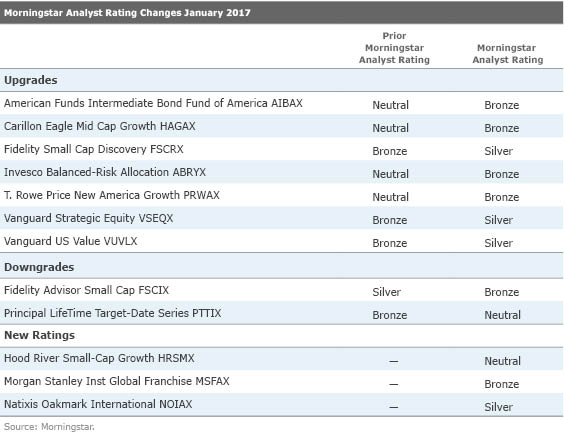 Katie Rushkewicz Reichart does not own (actual or beneficial) shares in any of the securities mentioned above. Find out about Morningstar’s editorial policies.