Along with huge gaps in many economic indicators, the racial wealth gap in America is staggering. According to the Survey of Consumer Finances, white families had more than 7 times the wealth of the average Black family in 2019.

Furthermore, that ratio has not moved meaningfully in decades.

Income gaps between races in America are also high--white families had a median income of more than $70,000 compared with a touch over $41,000 for Black families--but not nearly high enough to fully explain the wealth gap. This disparity makes it much more difficult for people of color, and particularly children, to build more wealth.

One policy solution that could help close this gap is an idea called “baby bonds,” originally proposed by two academics: Darrick Hamilton and William Darity.

In simplest terms, the government would contribute to savings accounts for children under 18, with the contributions determined by family income or wealth. When a recipient turns 18, the money can go toward certain uses, such as paying for college or buying a house.

Morningstar supports the concept of baby bonds as a way to help children from lower-income families, but we are not endorsing any particular bill or program design. However, we believe it is important to use our expertise to analyze the effect such programs could have on reducing the racial wealth gap and the trade-offs in program designs.

The program design most fully specified in draft legislation is called the American Opportunity Accounts Act. Under this model, every child would receive $1,000 in an account at birth, followed by subsequent contributions of up to $2,000 each year depending on family income. The money would be invested in Treasuries and could be withdrawn by the child to pay for expenses such as college, purchasing a house, or other “wealth building” activities that are not fully specified.

Would Baby Bonds Close the Racial Wealth Gap? In a recent paper, we examined whether the income-based baby-bond program proposed in the American Opportunity Accounts Act can address the racial wealth gap, given the literature suggests income and wealth may not be that closely correlated.

The answer is a resounding, overwhelming yes. 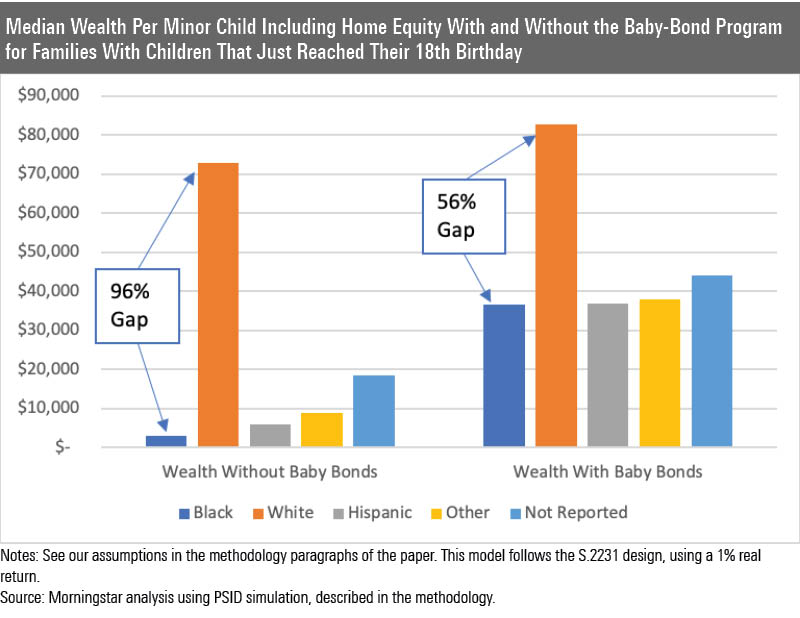 To arrive at the impact illustrated above, we divided a family’s wealth by the number of children in it, including the child who just turned 18. We excluded the other children’s baby bonds from the household’s wealth because these funds are not accessible until that child reaches 18.

We tested the program by using different return assumptions, program designs, and measures of wealth (fully reported in the paper), but baby bonds would work to reduce the racial wealth gap. The reason that they do not fully close the gap is due to differences in home equity between African Americans and whites in America, which would still need to be addressed through other avenues.

What Are the Potential Challenges and Trade-Offs of Baby Bonds? To be clear, baby bonds would not be a panacea, but they hold promise for addressing the racial wealth gap. Moreover, there are several implementation challenges that no one has fully addressed.

One policy challenge is ensuring that, as recipients gain access to the bonds at 18, they use the money to increase their likely long-term wages through education or their wealth through investments.

Policymakers need to balance guardrails with flexibility, while creating an off-ramp so the assets at age 18 can be invested in education, housing, or traditional investments. We feel particularly strongly that policymakers need to explore ways to make it easy to invest in traditional retail investments such as mutual funds and exchange-traded funds, while ensuring that 18-year-olds get good advice for making such investments.

Another issue policymakers need to wrestle with is whether they want this program to principally focus on equity among larger baby-bond holders or if they are willing to allow bondholders to bear risk to potentially get larger returns, thus potentially further reducing the racial gap.

Policymakers need to decide whether children who reach age 18 in some years should have much larger balances than children from identical backgrounds who reach age 18 a few years before or after in exchange for likely higher overall levels of wealth among the poorest kids in society.

At Morningstar, we plan to continue analyzing further iterations of the baby-bond design, particularly by using our stochastic wealth-forecasting models to illustrate the trade-offs of designing baby bonds to take more investment risk than the current legislation anticipates. We will also continue to analyze other ideas to narrow the racial wealth gap.

For more information on baby bonds, download the full report. Get My Copy