Research has shown that employers’ ability to automatically enroll workers into investment defaults within defined-contribution plans—provided by the Pension Protection Act of 2006 (PPA)—led to a significant increase in participation rates and a reduction in self-directing participants.

However, many studies that plan sponsors, consultants, and investment advisors use to identify best practices for participants were conducted prior to the introduction of the PPA. The potential impact of smaller core investment menus may not have the same effect when most participants are ending up in the default-investment option today.

In “ Bigger Is Better: Defined-Contribution Menu Choices With Plan Defaults ,” we explored the relation between core investment menu size and two key participant investment decisions: the acceptance of the plan’s default-investment option, and the efficiency of portfolios among participants who were self-directing their accounts.

Here, explore some of our key findings from this research.

The effect sizes noted in the analysis are large enough to have an economically significant impact on retirement outcomes for participants. 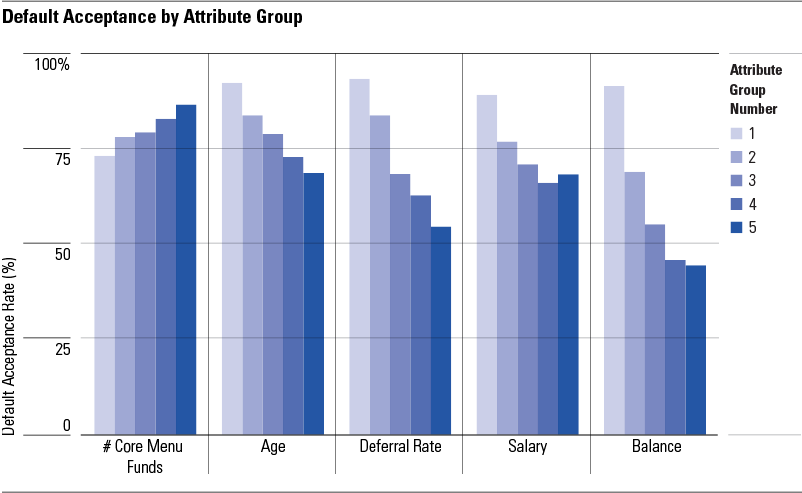 Increased default-investment acceptance within plans that offer larger core menus is consistent with the concept of  choice overload, or the phenomenon that people have a difficult time making decisions when faced with numerous options.

Specifically, we found that participants in plans with about 10 funds had an average of 4.4 holdings in their portfolio; participants in plans with around 30 funds had an average of 8.6 holdings. Risk-adjusted performance increases, on average, by 3.6 basis points for each fund included in the client portfolio. Therefore, increasing a fund menu from 10 funds to 30 funds, which would result in an average increase in holdings of approximately three funds per participant, would result in an estimated increase of alpha of 11 basis points for those participants self-directing their accounts. The relation between portfolio size and portfolio efficiency is detailed in the chart below. 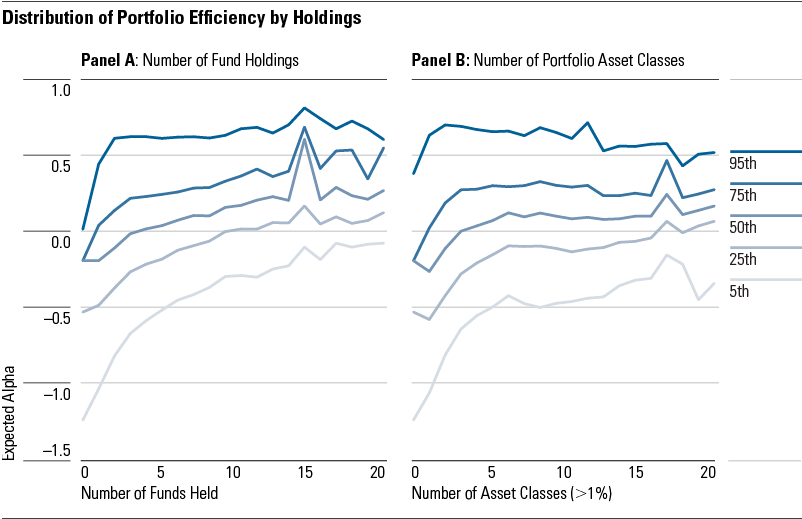 It’s not entirely clear whether improved portfolio efficiency is the result of access to a broader range of high-quality investment options or  naïve diversification in which self-directed participants simply spread their portfolio among a larger number of funds.

Either way, we can extrapolate the expected portfolio-efficiency benefits estimated for self-directed participants to the default-investment acceptance analysis. Then, we can determine that the aggregate plan-level increase in expected alpha for a plan moving from 10 to 30 funds in the core menu is approximately 10 basis points.

These findings demonstrate a relatively easy way for plan sponsors to work to improve likely retirement outcomes for participants. While there are additional administrative and monitoring costs that need to be considered when maintaining a larger core menu, those costs are likely significantly lower than the expected benefits.

Overall, large core investment menus appear to have the dual benefit of nudging more participants to use the default-investment option while getting self-directed participants to build more-efficient portfolios. When it comes to core menus, bigger is better.

To read the full analysis, download “Bigger Is Better.”
Get My Copy

Morningstar Investment Management LLC is a registered investment adviser and subsidiary of Morningstar, Inc. The Morningstar name and logo are registered marks of Morningstar, Inc. Opinions expressed are as of the date indicated; such opinions are subject to change without notice. Morningstar Investment Management and its affiliates shall not be responsible for any trading decisions, damages, or other losses resulting from, or related to, the information, data, analyses or opinions or their use. This commentary is for informational purposes only. The information data, analyses, and opinions presented herein do not constitute investment advice, are provided solely for informational purposes and therefore are not an offer to buy or sell a security. Before making any investment decision, please consider consulting a financial or tax professional regarding your unique situation.