School is back in session. We’ve assigned a Morningstar Analyst Rating® to 62 college savings plans available across the United States, which represents more than 97% of assets invested in 529 plans.

Each year, we rate these plans across five key pillars: Process, People, Parent, Price, and Performance. An overview of how the industry has generally improved across these five pillars is available in Morningstar’s 529 Landscape Report, which also covered: 529 industry best practices; shared trends such as industry growth and recent expansions of tax benefits; and reviews of new Morningstar Categories for 529 plan age-based portfolios that launched in April 2019.

This year, our analysts upgraded nine of the 62 plans and downgraded eight. We identified 30 best-in-class plans, assigning these programs a Morningstar Analyst Rating of Gold, Silver, or Bronze 529 ratings. College savers invested in these plans have made a fine choice, as they generally follow industry best practices and offer a combination of the following attractive features:

Five of the plans didn’t score so well on our report card, receiving Negative 529 ratings this year. Negative-rated plans have at least one flaw that makes them worth avoiding for most college savers, such as an unstable investment team or high fees.

The valedictorians of 529 ratings

Four plans merited a Morningstar Analyst Rating of Gold this year. In alignment with the industry trends we uncovered in the 529 Landscape Report, these plans stand out for their low costs, strong stewardship, and exceptional investment options.

We upgraded California’s ScholarShare College Savings Plan to Gold in 2019, as its board voted to move its age-based portfolios to a progressive glide path in February 2020. That’s an industry best practice, as it smooths the transition from stocks to bonds and reduces the risk of making a large shift out of equities just after a market dip when there's the potential to lock in losses. The plan’s portfolios also rank among the most affordable in the industry within their respective categories.

Virginia’s Invest529, Illinois’ Bright Start College Savings, and Utah’s my529 continue to distinguish themselves from other plans for their excellent state oversight and program management, best-in-class investment options, and thoughtful investment philosophy.

These plans have stayed ahead of their peers by innovating in areas where most 529 plans aren’t. For instance:

But this group of Gold-rated plans also hasn’t fixed what isn’t broken: Each plan’s asset allocation remains consistent and well-reasoned. Both in-state residents and out-of-staters will not go wrong by investing in one of these three plans.

The class of Silver-rated plans, outlined on the table below, saw some shakeups. 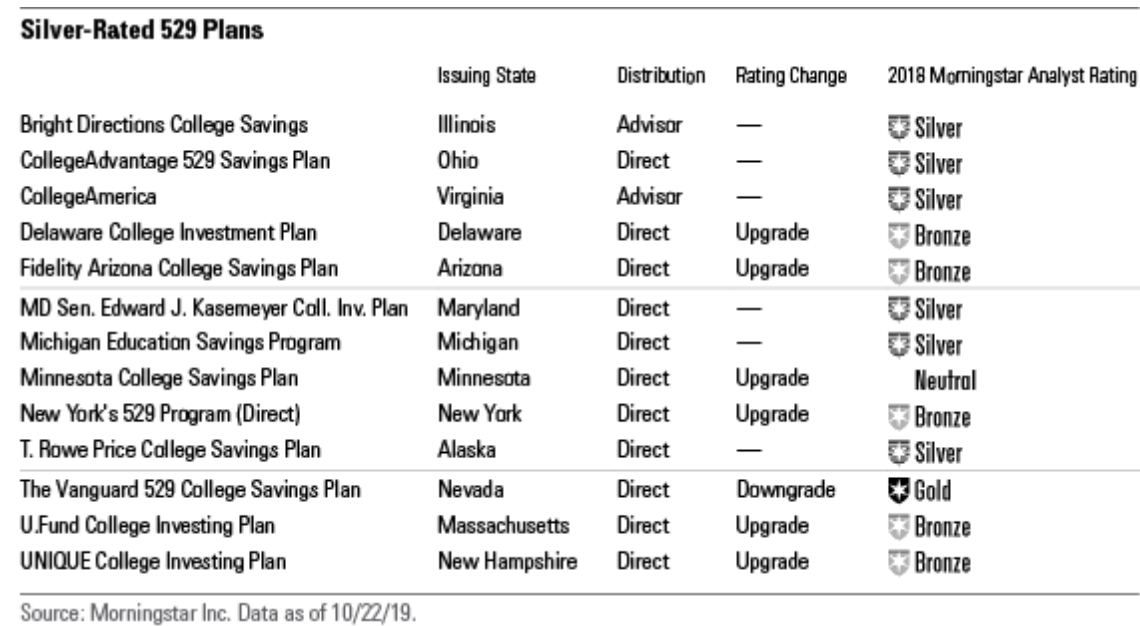 A few noteworthy callouts include:

Plans that haven’t kept pace with the industry’s dizzying fee cuts also look unattractive, and there's little incentive for even in-state college savers to stay close to home when similar fare is offered at a much more palatable price elsewhere.

Two examples of this include Arkansas’ GIFT College Investing 529 Plan and North Dakota’s College SAVE, which are overseen by a partnership between Vanguard and Ascensus. These plans continue to earn Negative 529 ratings because of excessively high and stagnant fees layered on top of Vanguard’s typically low-cost index funds. Similarly, Nebraska’s TD Ameritrade 529 College Savings Plan offers comparable investments to Nebraska’s NEST Direct Plan, yet continues to charge a Sub-Administration fee for TD Ameritrade of 0.19%.

Although ratings for 529 plans use the same scale as the Morningstar Analyst Rating™ for mutual funds, the 529 ratings reflect the quality of the entire plan, rather than of an individual investment within the plan.

These ratings demonstrate how increasing investor appetite for lower fees, strong stewardship, and underlying fund quality are manifesting across the investments in various 529 plans.

Investors in plans that, for instance, proactively cut fees or move assets to age-based portfolios, are on track to get ahead—and those who aren’t, risk being left behind.

Learn more about the trends behind these ratings movements in Morningstar’s 529 Landscape Report.
Get My Copy