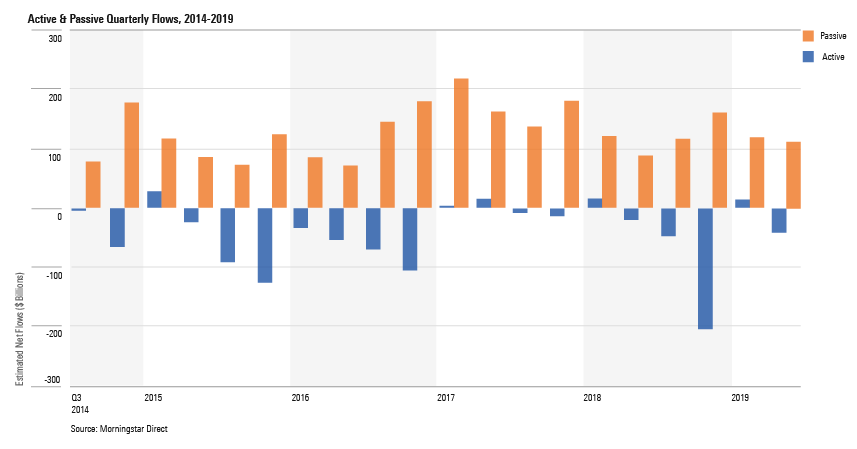 The positive momentum continues for taxable- and municipal-bond funds, which collected about $95 billion and $23 billion during the second quarter, respectively. 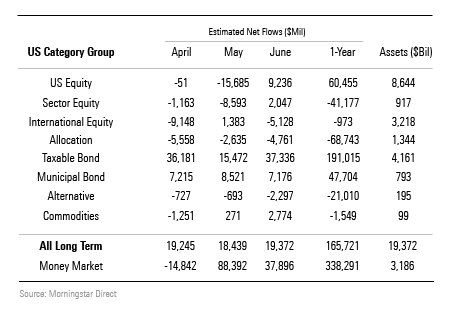 Municipal-bond funds, for their part, had their best first half in at least a decade, collecting nearly $51 billion.

Money continues to pour into passive funds, often at the expense of active strategies. In the second quarter, passive funds collected nearly $135 billion across all asset groups while active funds lost nearly $42 billion.

These results have become commonplace over the past five years, yet they’ve added up: Over the past 12 months, active funds have seen $341 billion in outflows while passive funds have taken in nearly $544 billion.

The flows into passive funds have impacted overall market share, which hit 40% by the end of the second quarter, up from 37.4% 12 months ago. Unless there’s a major shift in investor demand, passive-fund market share will eventually catch and perhaps surpass that of active funds.

Yet, second-quarter 2019 was the fifth consecutive quarter of weak international-equity flows. The group had outflows of nearly $13 billion—its greatest outflows in at least a decade—despite the fact that the average foreign large-blend fund actually gained 3.0% during the quarter.

As with other asset groups, investor demand has narrowed significantly. For the year-to-date, only the diversified emerging-markets and foreign large-blend categories have received meaningful inflows: about $19 billion and nearly $13 billion, respectively. The rest of the group had nearly $31 billion in outflows.

Allocation funds are being shunned even more than international-equity offerings. The group lost about $13 billion in second-quarter 2019, for total outflows of $185 billion over its 16 consecutive quarters of negative outflows. However, thanks to robust capital markets, the group’s asset base still grew from $1.25 trillion to $1.34 trillion. 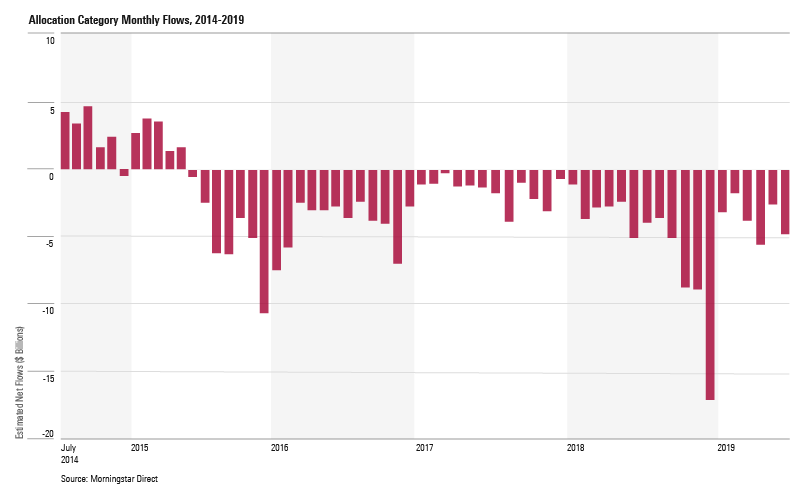 The likely reason for outflows from allocation funds, what used to be known as “balanced” funds, is the increasing popularity of target-date funds and other types of managed portfolios. The allocation funds group collectively may need to reinvent itself to remain relevant to investors.

For the full analysis, download the Morningstar Fund Flows Commentary.
Get My Copy