Cannabis companies are poised to see sales grow by nearly nine times through 2030 as legalization gains popularity and distribution widens, according to Morningstar’s latest research.

The U.S. recreational, U.S. medicinal, Canadian, and global medicinal export markets have penetrated just 8%, 21%, 11%, and 19% of their estimated markets, respectively. We believe this large, underserved market will provide top-line growth and fixed-cost leverage for cannabis companies, supporting a “green rush” through at least the next decade.

These findings are among the key takeaways detailed in our Basic Materials Observer on cannabis market growth. The full report provides a playbook for investors seeking exposure to different cannabis trends, as well as market-size forecasts and regulatory outlooks for major cannabis markets.

Below, explore some of our findings about the current state and future expectations of the cannabis industry in the U.S., Canada, and international markets.

Further Legalization and Commercial Distribution Across 9 States Will Drive More Growth in the U.S. 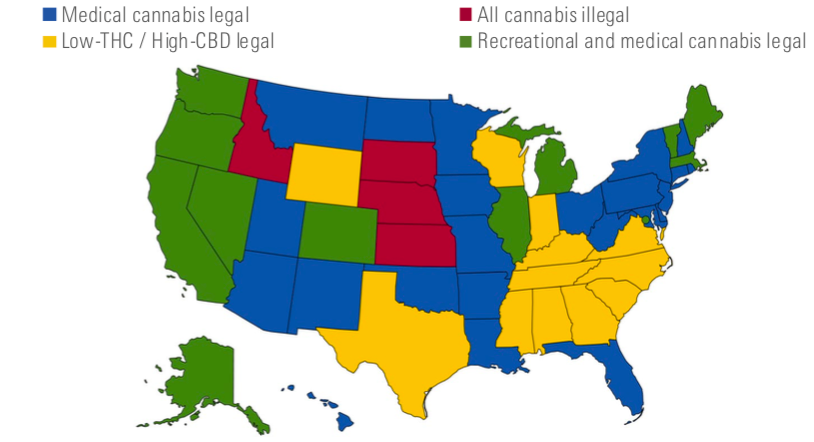 The Canadian cannabis market outlook: forecasted to be 9 times larger in 2030 than it is today

Unlike the confusing U.S. cannabis laws, Canada’s laws are very clear: Recreational cannabis was legalized in June 2018 when Canada’s House of Commons and the Senate approved Bill C-45 (the Cannabis Act). The law took effect in October 2018, making Canada the second country after Uruguay to fully legalize cannabis for adult use.

Canada’s current market penetration is at just 12% of the market, shown below. This leaves a significant runway for growth and underpins our forecast that cannabis sales will grow nearly 20% per year on average.

Source: State of the Legal Marijuana Market by Arcview Market Research and BDS Analytics (cited by Digital Journal) and Morningstar.

The international cannabis market outlook: Medical growth is expected, but competitors are emerging

Source: Current market estimate based on Coherent Market Insights (as cited by MarketWatch), ResearchAndMarket.com (as cited by GlobeNewswire). Forecast from Morningstar.

Read the summary and key takeaways from our report on cannabis market growth.

Read the summary and key takeaways from our report on cannabis market growth.
Get My Copy