The 529 industry has consistently improved since we began covering the market in 2004: Fees have fallen, underlying investment quality has increased, and oversight has strengthened.

Morningstar Research Services’ annual study, “ 529 College-Savings Plan Landscape,” showcases the market’s most recent improvements and leverages our latest methodology for analyzing and rating plans. Here are a few of this year’s key findings.

Assets under management in the 529 market remained virtually unchanged year over year from 2017 to 2018—the first time they haven’t posted meaningful growth since 2011. This was largely due to fourth-quarter 2018 losses, which dragged down the S&P 500’s calendar-year return to -4.4%.

However, as shown on the chart below, 529 plans still saw strong growth over the three- and five-year periods ending December 2018, with annualized rates of 7.9% and 7.4%, respectively. Lower-cost direct-sold plans saw greater growth than higher-cost advisor-sold plans over the past five years: 9.9% compared to 4.4% annually. In addition to higher inflows, lower expense ratios helped direct-sold plans grow faster, since they lose fewer assets to fees. 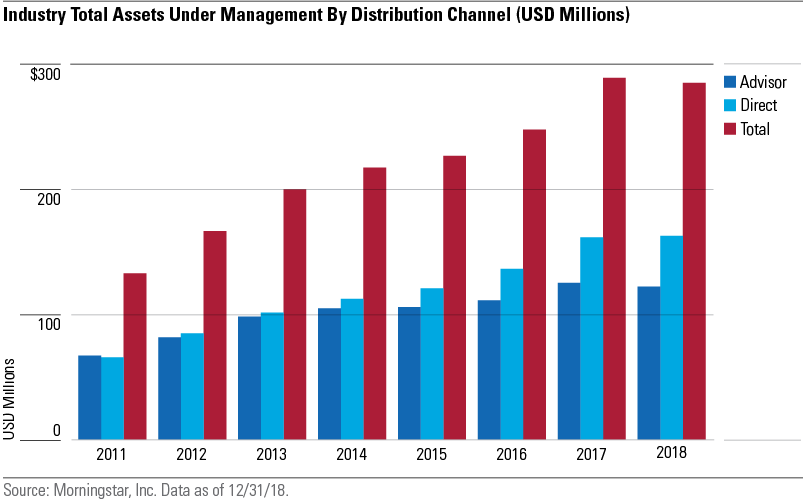 2. Fees continue to decline for both direct- and advisor-sold plans

As a result of this environment, plans that aren’t cutting fees look less attractive than peers. For instance, in 2018, we downgraded the Morningstar Analyst Ratings for Arkansas’ and North Dakota’s direct-sold plans to Negative from Neutral, as their fees have become increasingly high relative to peers that have aggressively cut expenses. 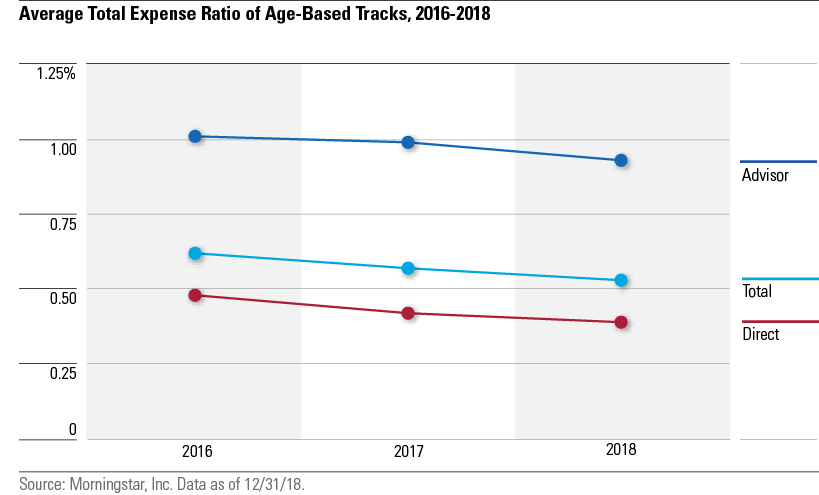 3. The quality of investments underlying 529 plans has improved

The underlying investments included in a 529 plan’s portfolio play a meaningful role in helping families reach their college-savings goals.

As the chart below shows, the average percentage of assets in age-based portfolios that reside in Morningstar Medalists has about doubled over the past three years, from just over 30% in 2015 to nearly 65% at year-end 2018. This trend toward higher-quality investments in 529 plans highlights the need for plan providers to continually review and upgrade their lineups to remain competitive. 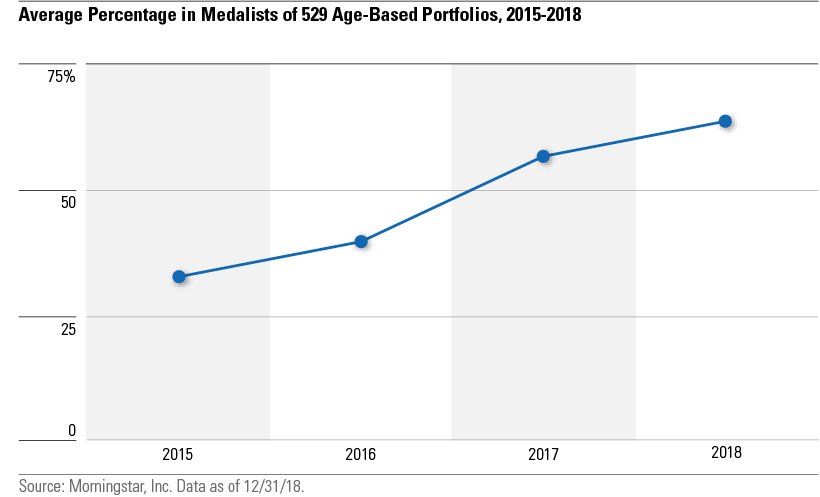 4. In the 529 market, many plans have implemented smoother transitions from stocks to bonds in age-based portfolios

Age-based portfolios are a popular choice for 529 plans because they automatically move out of stocks and into bonds as a child grows up, which helps families accumulate savings for college while tapering volatility.

Age-based portfolios follow either static or progressive (commonly referred to as stepped or smoothed) approaches as they rebalance along the age-based track. The former makes abrupt shifts from stocks to bonds at predetermined dates by shifting assets from one investment option to another, often every few years and timed based on the beneficiary’s date of birth. This static approach can introduce meaningful market risk if it makes a large asset-allocation change suddenly. Meanwhile, a progressive track keeps the investor’s assets in a single investment option—similar to a target-date retirement fund—and uses smaller, more frequent asset allocation adjustments, making for a smoother ride.

In recent years, plans have narrowed the size of the steps their age-based tracks take, so investors take more frequent but smaller jumps. As shown on the chart below, which groups 529 plans’ age-based tracks into one of three buckets based on the track’s largest equity percentage point step down in the glide path, more than 40% of age-based tracks (including progressive glide paths) step-down their equity exposure in increments of 10 percentage points or fewer. This is compared with 10% two years ago.

Previous editions of Morningstar’s 529 landscape report have shown that historically, smaller and more frequent transitions have tended to lead to better outcomes. It can be prudent to smooth out an age-based track because a smoother track works to reduce the variability in outcomes while improving, or at least not affecting, an investor’s average return. 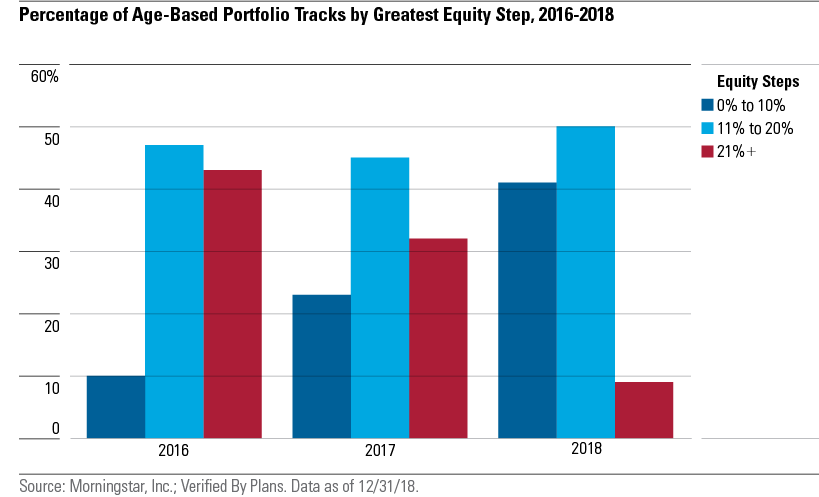 5. The federal tax benefits of 529 plans now extend to private primary and secondary education, though these are not universally matched at the state level

In recent years, federal policymakers have increased the flexibility of the 529 plan as a spending vehicle to extend federal tax savings on education. The Tax Cuts and Jobs Act of late 2017 legislated that expenses qualifying for 529 savings now include tuition for private K-12 education.

For the most part, 529 plan providers are still determining what investment options they will offer to meet K-12 withdrawals. As of December 2018, most states that permit K-12 deductions have not yet adapted their investment lineups for this group of savers.

With lower fees, better-quality investments, and improved age-based portfolio designs, the 529 market has become increasingly competitive. Our ratings reflect which plans have been the most successful at keeping pace with the trends that our research indicates are driving the industry.

For more about the landscape of 529 plans, download our white paper.
Get My Copy