There’s been a significant increase in the use of “intelligent,” or diversified, investment defaults in 401(k) plans over the past 10 years. Given the many positive effects that these default investments have had on investors, we wanted to study their stickiness, or rather, the likelihood that plan participants would initially accept the default and remain in it.

About 85% of plans currently use a target-date fund as their default investment, while 6% of plans use a balanced (or target-risk) fund and 5% use managed accounts, according to recent research by Callan. Among these three qualified investment defaults, managed accounts have seen the largest growth over the last three years, up from 1% in 2015.

Who accepts the default investment?

We commonly hear from plan sponsors and consultants that older participants are less likely to accept the plan default. At first glance into our dataset, we found that 80% of 25-year-old participants accepted the default compared with 60% of 65-year-olds, which suggested that age was a driver of default acceptance.

However, as participants age, they, on average, tend to have much higher salaries than younger people. So when we drilled down into default acceptance by age and income level, the relations between the three factors became clearer, which you can see below: 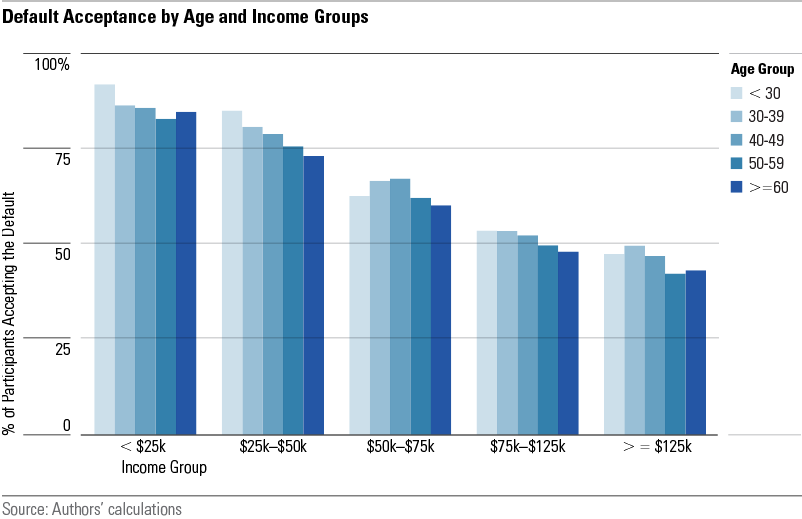 That’s not to say age doesn’t matter—it does, but it’s important to keep in mind that older individuals tend to have characteristics associated with lower default acceptance (e.g. longer tenures, higher salaries, higher balances, and higher contribution rates). It’s these characteristics, not necessarily their age, that makes them less likely to accept the default.

Which default investment is the stickiest?

We also wanted to better understand how default acceptance varied by investment type. Target-date funds are currently the most popular default, followed by balanced funds and then managed accounts. Yet it’s not clear which default investment is the “stickiest,” defined as having the highest initial and ongoing acceptance.

Our analysis found that managed accounts were the stickiest default, followed by target-date funds. The graph below contrasts the probability of default acceptance for the “median” 401(k) investor at each age. 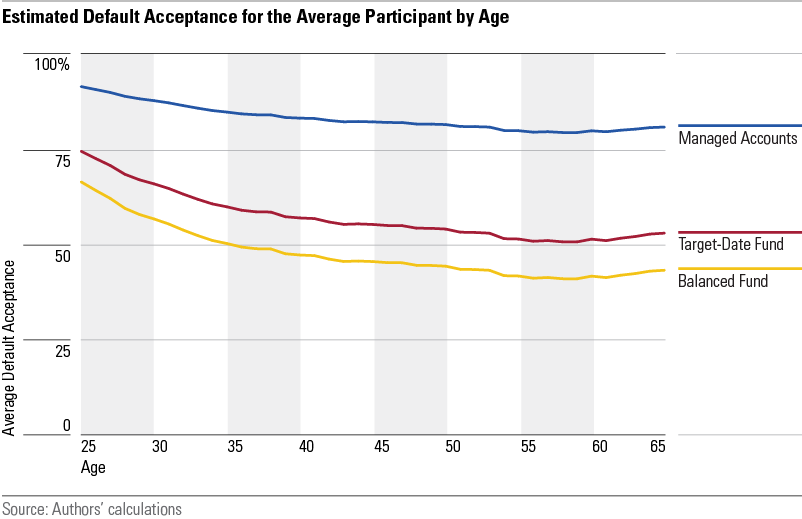 So why is the stickiness of the default investment important?

Historically, when evaluating the default investment, the focus has been on fees, performance, and, to an extent, how well the investment solution fits the plan participants. While it’s important to consider all these things, we also believe that it’s just as important to consider the type of participants using the default and the likelihood of them continuing to use it.

Our research shows that participants who accept and use the default investment have particular characteristics and aren’t the “average” participant. We also found that more customized defaults tend to lead to more participants continuing to use them.

For plan sponsors in the process of designing a retirement plan and selecting a default investment, our analysis suggests that there’s value in considering the type of investor using the default, as well as more customized defaults.

David Blanchett is a retirement researcher for Morningstar Investment Management and Dan Bruns is a product and investment specialist for the Morningstar Retirement Solutions product group.

Download the paper, "Which Default Investment is the Stickiest?"
Get My Copy