It’s possible that this trend emerged as a result of the Fed’s decision to suspend rate hikes for the time-being, which may have led investors to feel comfortable moving into long-term risk assets. However, this partly came at the expense of money market funds, which enjoyed about $163 billion of inflows during fourth-quarter 2018, but just $31 billion of inflows during first-quarter 2019.

Still, despite healthy long-term inflows overall, bonds were the only individual asset class with strong demand throughout first-quarter 2019. Nearly $102 billion went into taxable-bond funds in the first quarter. And as shown on the chart below, another $28 billion went into municipal-bond funds, making this the best quarter for muni-bond funds since third-quarter 2009.

The interest in munis may have owed to attractive valuations relative to Treasury bonds entering 2019, as well as an upward-sloping yield curve; another factor in this growth may be investor expectation of higher tax rates in the future. 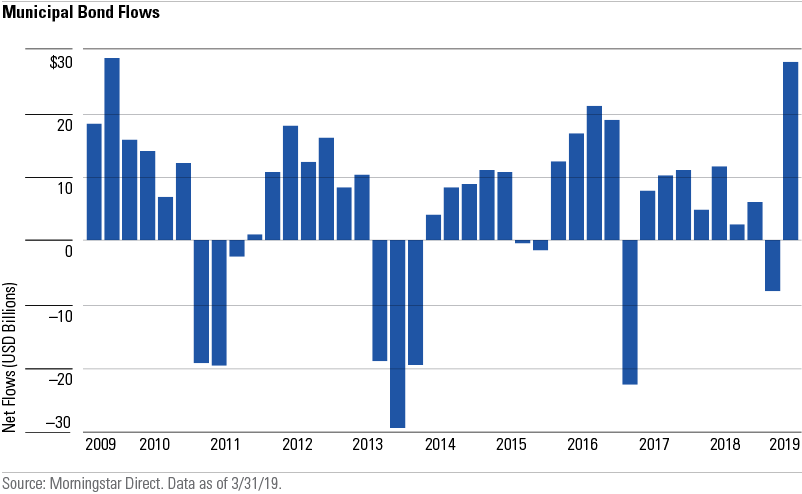 However, as shown below, credit-oriented bank-loan funds fared poorly, with investors pulling nearly $10.8 billion during the quarter. Bank-loan funds tend to have short durations, so with Fed rate hikes on hold, their outflows may reflect investors’ greater comfort with more interest-rate risk, as found among high-yield funds. 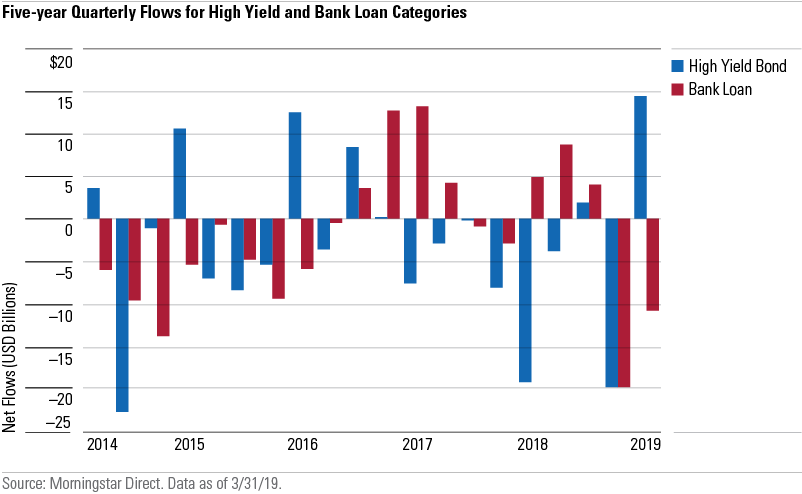 Overall, taxable intermediate-term bond funds fared the best of any Morningstar Category, taking in nearly $42 billion in the first quarter of 2019. These strong flows reflect the continuing popularity of core-oriented strategies, with large-blend funds collecting $25.6 billion during the quarter, followed by muni-national intermediate funds collecting $13.9 billion.

Passive funds continue to take market share from active funds. At the end of the first quarter, passive U.S. equity funds hit 49.0% market share as measured by total assets—an increase from 46.3% the year before. Similarly, across all long-term funds, active market share fell to 60.6%, down from 63.0% at this time the year before. That’s a big shift, especially within the context of about $18.8 trillion of open-end and ETF assets.

Though these movements are noteworthy, they may actually understate the shift in investor demand. These trends become much more apparent through the lens of cash flows: Over the past four years, active funds have seen a total of $855 billion in outflows, while passive funds have had $2.0 trillion in inflows, resulting in a total difference of nearly $2.9 trillion (as shown on the chart below).

Nonetheless, bond funds did lead active funds to see positive flows of $15.7 billion in first-quarter 2019—making it only the fifth positive quarter for active funds in the past five years. Conversely, long-term passive funds haven’t collected less than $25 billion in any quarter over the past 10 years. 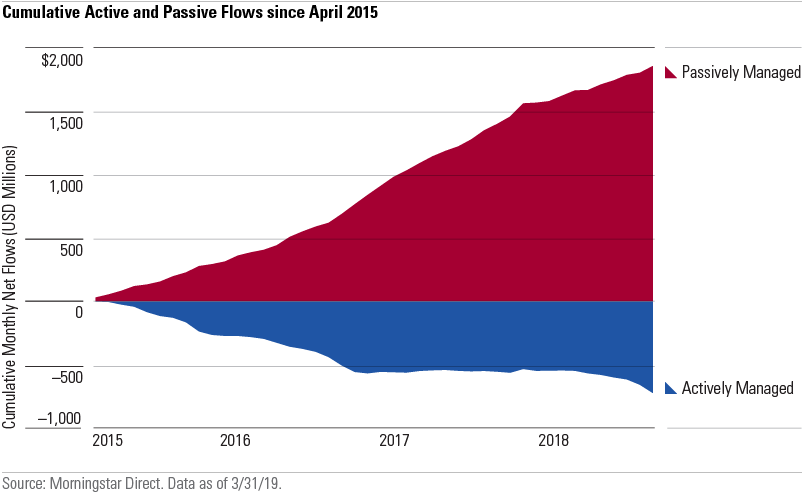 The dominance of passive strategies naturally shows in fund-family assets and flows, too. The net result is that the industry looks increasingly like an oligopoly.

Vanguard holds, by far, the greatest percentage of market share—25.0% compared with the combined 24.9% of the next three largest firms (American Funds, Fidelity, and iShares). That’s a combined 49.9% market share across just four firms, meeting one definition of an oligopoly.

Like the active/passive fund comparison, the dominance of just a few firms is even more pronounced when looking at cash flows. In March 2019 alone, Vanguard and iShares collected about 81% of inflows, or $33.9 billion. And over the course of the quarter, nearly $123 billion of the net $134 billion in total long-term flows went to the top five firms as measured by inflows: Vanguard, Fidelity, iShares, American Funds, and Dimensional Fund Advisors.

All five of these firms are noteworthy for their scale, distribution, and lower costs: three hallmarks of oligopolistic competitors. Unless regulatory changes or seismic innovation lead to substantial industry disruption, we believe this dynamic is likely to continue for the foreseeable future.

For the full analysis, download the latest edition of our monthly fund flows commentary.
Get My Copy