Corporate boards have become more gender diverse—that's the headline across multiple news sources. MSCI shows an uptick in global board appointments filled by women. Deloitte finds that women hold 25% of Fortune 100 board seats.  Equilar reports that women filled 35.9% of new board seats in 2018.

At first glance, Morningstar's equity data shows similar findings. For the Russell 3000, corporate boards have become steadily more gender-diverse since 2010, as shown in the chart below. 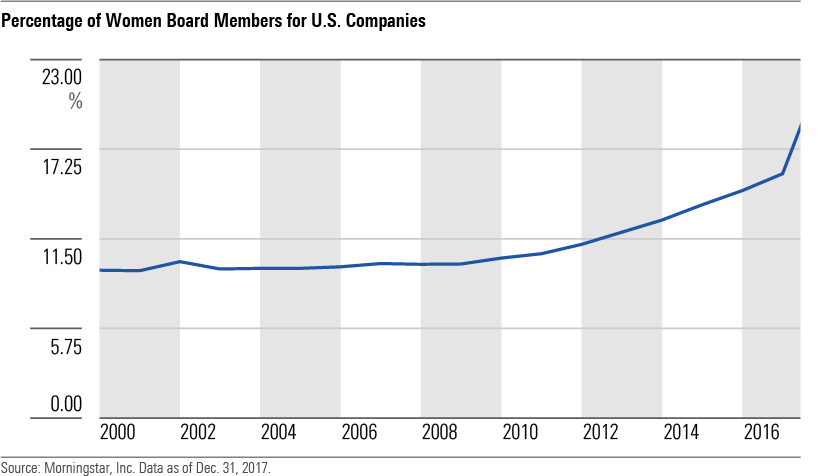 In the chart below, we looked within companies and tallied the number of female directors. Nearly 20% of boards are considered gender diverse, defined as having three or more women on them. Across the sample of the Russell 3000, all-male corporate boards are in the minority. 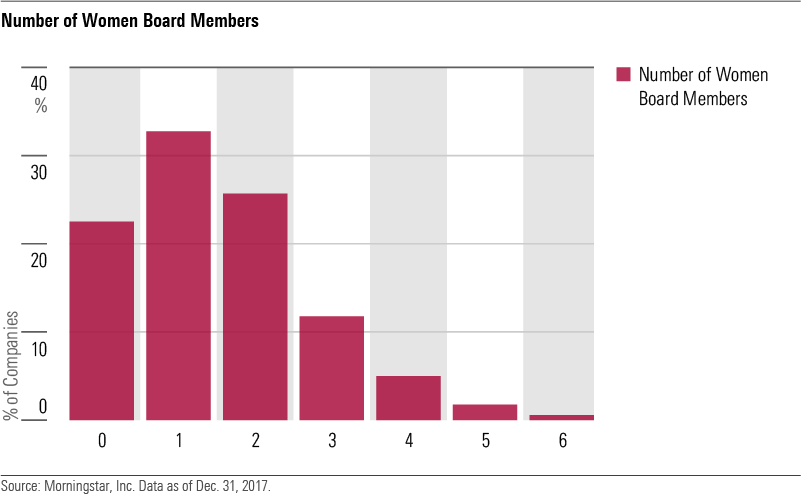 These two high-level views of the data on board gender diversity paint an encouraging picture of progress, albeit with plenty of room for improvement. However, when we take a deeper dive into the data, we see a less rosy picture.

A gap in board gender diversity

Small-cap companies are just reaching the level of board gender diversity that the S&P 500 was at a decade ago. As we look down the market cap, the disparity in board gender diversity appears to be increasing through time. In the graph below, we show that the gap between the S&P 500 and the remaining companies in the Russell 3000 is growing, from 5.4% in 2009 to 8% today. Whatever pressures are driving female representation at the upper end of the market-cap range, they are much weaker at the lower end of the range. 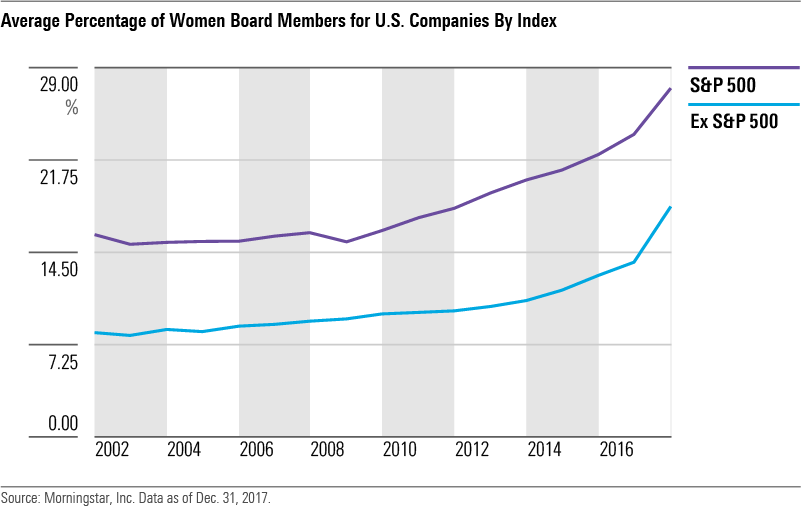 Progress is slow, but change can be swift, as shown in California. In September 2018, California passed S.B. 826, which requires public companies headquartered in California to have at least one woman on their boards by 2019. By 2021, if a board has five directors, then two must be women; and three must be women if there are six or more directors. Currently, Board Governance Research finds that 53% of microcaps in California have no female directors. To comply with S.B. 826, qualified women will be in high demand to fill these board seats.

Where will these women come from? 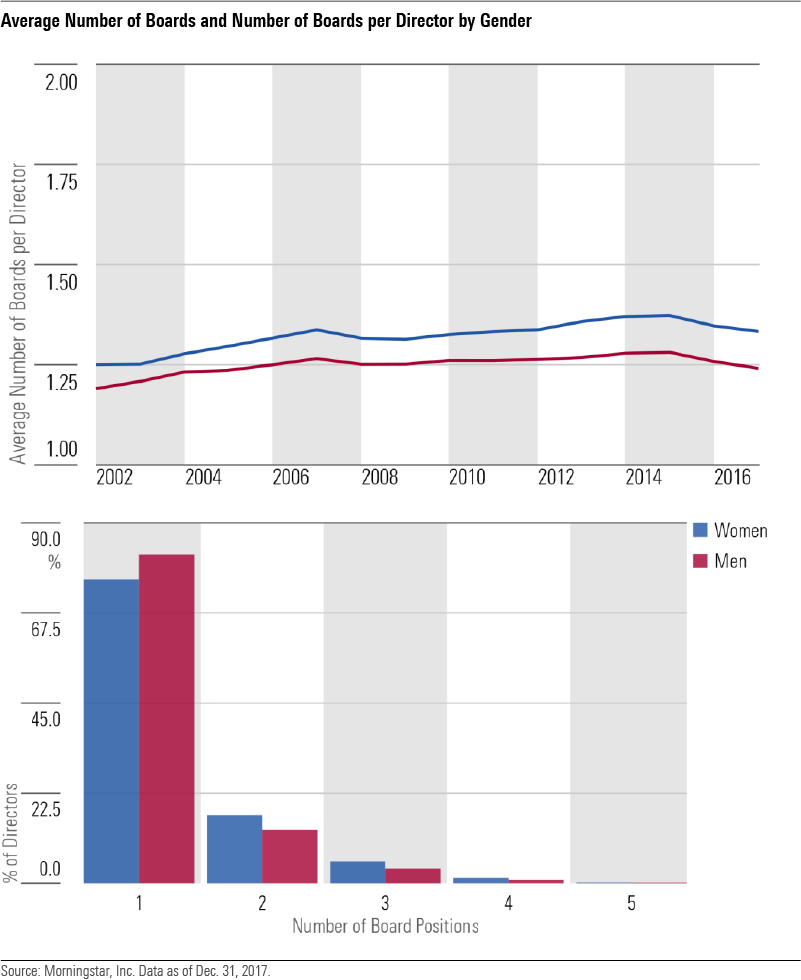 Of women who sit on boards, 24% sit on more than one, as shown in the chart above. Comparatively, only 17.9% of men serve on multiple boards. While small, the finding is statistically significant and carries important implications. The value of gender-diverse boards comes in having a diversity of opinions and what this means for the quality of corporate leadership. At a market level, if increasing board gender diversity just means hiring the same women onto more boards, there is no net increase in diverse perspectives in the market for board leadership. Furthermore, with the increasing demands on board directors, "overboarding" is a red flag that many governance advocates raise with respect to directors who hold three or more board positions.

Yet, there is a simple explanation: Boards face an availability pool issue. Assuming corporate boards are sincere in their desire to increase gender diversity, female candidates meeting the traditional standards are a rare resource. Women make up only a fraction of public company senior management positions and existing board positions. As a result, corporate boards are selecting from the same, small population of female executives and existing board directors.

Unlike the trend to accelerate the percentage of women on boards, the representation of women on executive teams is barely improving. This should be a concern to those filling board director seats because executives feed the pool of potential directors. Firms like State Street, Vanguard, and BlackRock have announced their intention to support gender diversity within corporations and have begun actively voting against directors who do not sufficiently address board gender diversity. 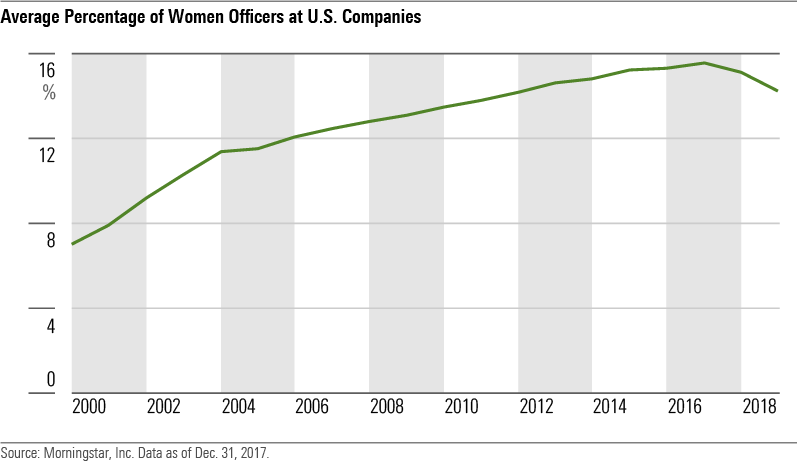 However, increasing female representation on boards does not begin and end at the top; it starts within the workplace. Companies must be actively supporting women throughout their careers, so they can advance into senior roles. Boards cannot become more gender-diverse unless the available talent pool does, too.

The headline numbers for corporate board gender diversity look promising, but clearly there is much more work to be done. It starts far lower down the corporate hierarchy, and with measures that address structural obstacles to female advancement in the workplace.

Read more of our research on women in investing.
Take Me There