The quest for yield has been an ongoing struggle for retirees and other investors who need to generate income, and it’s only getting tougher. The Federal Reserve recently voted to keep its short-term interest-rate target near zero and indicated it has no plans to raise rates in the next year or two. The yield on the 10-year Treasury bond yield is now about 0.67%. That’s higher than its all-time low of about 0.30% but still not even generous enough to keep pace with inflation.

Investors who want to eke out extra yield have numerous options, but some of them are safer than others. In this article, I’ll go through different alternatives for generating portfolio income, ranked from lowest risk to highest. 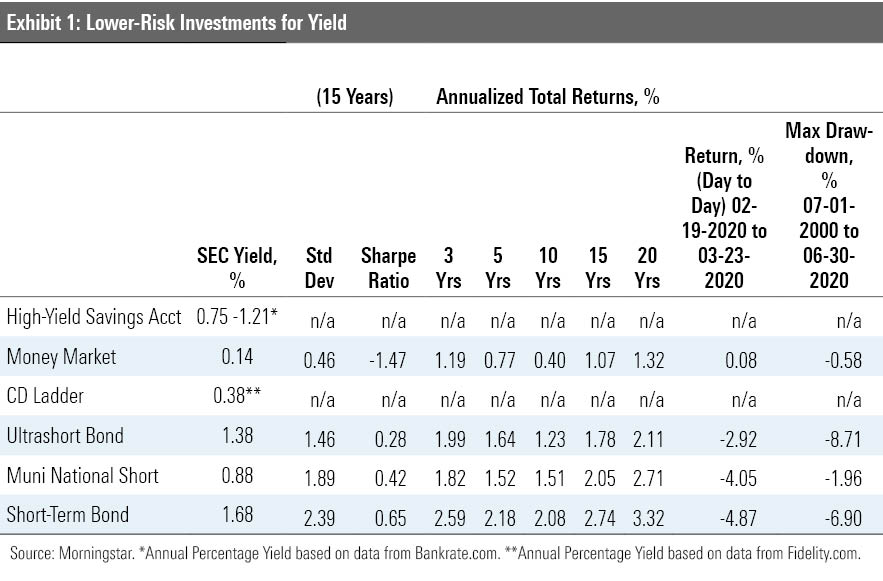 On the safer end of the spectrum, high-yield savings accounts offer the most compelling combination of yield and safety. Unlike money market funds and mutual funds, savings account balances up to $250,000 are insured by the FDIC, meaning that savers don’t have to be worried about losing money in the event of a bank failure. Online banks often offer above-market yields as a type of loss leader to get investors in the door.

Money market funds are also a relatively low-risk option for cash savings but have failed to keep pace with inflation over most trailing time periods. Despite a couple of high-profile exceptions, money market funds generally maintain a $1 per share net asset value and often offer convenient features for cash management, such as check writing.

A CD ladder, which you can build by purchasing a series of CDs with staggered maturity dates (for example, five CDs with maturity dates stretching from one years to five years), is another conservative option for income. On the negative side, CDs are less liquid and often subject to a penalty for early withdrawal.

Once you start moving away from savings vehicles into mutual funds, the landscape gets a little trickier to navigate. Ultrashort bond funds, for example, typically don’t take on much credit risk or interest-rate risk. Even so, they’ve been surprisingly prone to disappointing results in turbulent markets, including both 2008 and 2020. As a result, the average ultrashort bond fund has actually suffered a bigger maximum drawdown compared with short-term bond funds. The lesson for investors: Make sure to favor funds with low expense ratios and high credit quality and portfolios that include healthy doses of government bonds instead of more problematic sectors, such as asset-backed securities. Similar advice applies to short-term municipal-bond funds and short-term bond funds. 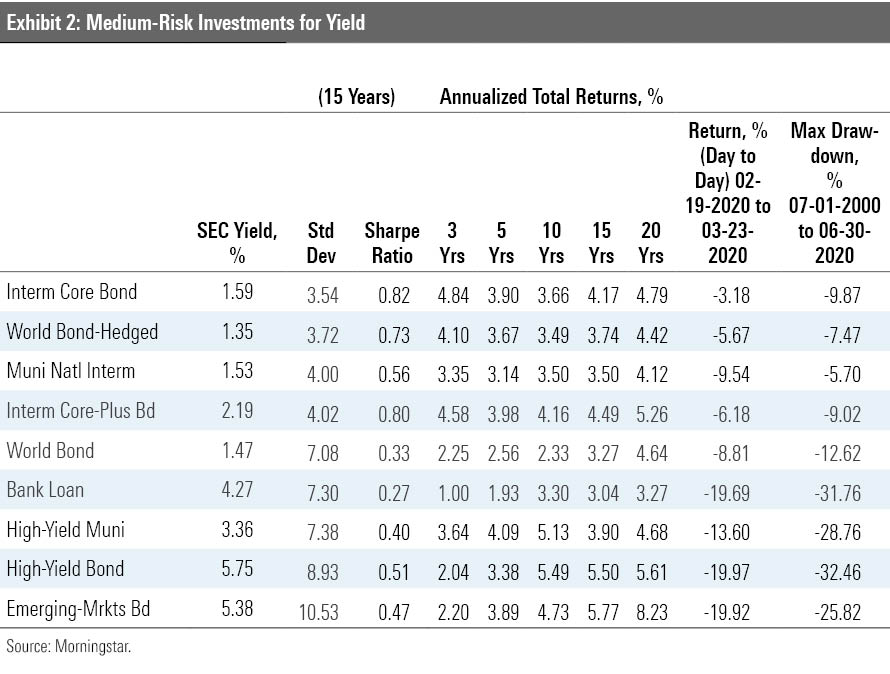 World bond funds are another option worth considering. While government bond yields in most developed markets are fairly low, a few markets (including Australia and Italy) offer marginally higher yields. Because currency exposure leads to significantly higher volatility, it makes sense to stick with funds that hedge their currency exposure.

The other fund categories in this group have had moderate levels of volatility overall but have suffered significantly bigger drawdowns when fixed-income markets are beset by instability. Bank-loan funds, for example, are often thought of as being relatively conservative because the securities they invest in have floating interest rates tied to broad market benchmarks such as Libor. This feature helps protect them from losses when interest rates spike. But bank loans are still subject to credit risk and liquidity risk. Over the past 15 years, funds in the bank-loan category have generally failed to generate high enough returns to compensate for their risks.

High-yield bond funds currently boast an SEC yield of 5.75% on average but have also been subject to lower returns at times. The junk-bond market typically suffers during times of economic weakness, such as the bank crisis in 1990 and the global financial crisis in 2007 and 2008. These funds also suffered huge losses in the first quarter of 2020, when the sudden economic shutdown and pandemic-driven uncertainty prompted investors to sell corporate bonds, especially those with weaker credit profiles. As a result, the average high-yield bond fund lost nearly 20% during the period from Feb. 19 through March 23, 2020. While bond prices have stabilized since then, high-yield funds remain susceptible to economic uncertainty and liquidity issues. It’s also worth noting that, in contrast to other fixed-income securities, high-yield bond funds have an unusually high correlation with large-cap stocks. Because of their risk profile and lack of diversification value, high-yield bond funds are therefore best used in small doses instead of as core fixed-income holdings.

Similar cautions apply to emerging-markets bond funds. Their correlation with stocks is a bit lower, but they still don’t offer as much diversification benefit as many other bond-fund categories. They’re also prone to periodic blowups, such as the Mexican debt crisis prompted by the devaluation of the peso in 1994. As investors sought refuge in safe-haven currencies such as the U.S. dollar during the coronavirus crisis earlier this year, emerging-markets bond funds lost 19.92%, on average. 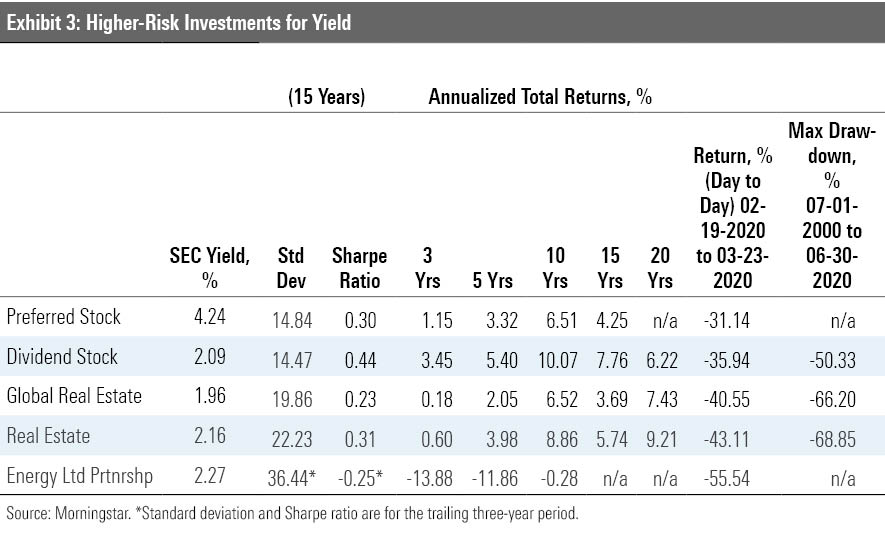 Finally, there are various types of equity securities that currently offer higher yields than investment-grade bonds. Not surprisingly, their volatility is on the highest end of the spectrum.

Preferred stock funds are often described as a stock/bond hybrid because they share traits from both of these categories. Like bonds, they carry credit ratings and rank higher in the capital structure than common stocks. However, they’re subordinate to bonds in the capital structure, and their interest payments aren’t subject to the same guarantees as bonds.

Dividend-paying stocks look better in terms of risk-adjusted returns. They’re traditionally thought of as a safe haven in times of market turbulence, but they haven’t always delivered on that promise. Overall, their volatility has been just a hair below the S&P 500 over the past 15 years, and they actually lost more in the COVID-19 correction in early 2020 as a few high-profile dividend cuts prompted concerns that more would follow.

Real estate funds are a riskier bet for yield. They’ve been subject to large losses during market downturns and also face an uncertain future if the coronavirus pandemic leads companies to adopt more-permanent work-from-home policies.

At the highest end of the risk gamut are energy limited partnership funds. These funds invest in master limited partnerships, which are a legal structure in which the partnership is required to distribute a substantial part of its earnings to unitholders. Theoretically, they’re less leveraged to energy prices compared with common stocks but have still been subject to extreme volatility. Although they could fare better during periods of rising energy periods, these funds have failed to generate strong enough returns to offset their extremely high risks. As oil prices plummeted in early 2020, in fact, they lost more than 55% of their value between Feb. 19 and March 23.

Your Comfort Level Extracting more yield for a portfolio is far from an easy task. And it’s critical to remember that yield is only one part of investment performance over time. An investment with higher yield will nearly always come with higher risk. That makes it important to navigate the options carefully and make sure you’re comfortable taking on additional volatility before adding a higher-yielding investment to your portfolio. Looking at performance during market downturns can be a good reality check to make sure you’re comfortable with the magnitude of potential losses.

At the end of the day, the safest approach is to add higher-yielding assets to your portfolio in small doses. If that still leaves you short of the income you need to live on, it’s sensible to take limited principal withdrawals to meet your cash flow needs (ideally in concert with a rebalancing strategy). While that will reduce the value of your portfolio over time, it can still leave you better positioned than loading up on high-yielding but overly risky areas.