As the market's rally off its March lows continued into May, asset flows settled down. Long-term mutual funds and exchange-traded funds collected a modest $33 billion--a partial rebound from the record outflows of $326 billion just two months before. Calmer markets also helped cool off money market flows. Those funds took in $31 billion for the month, but that's well off the pace after having raked in an astonishing $1.1. trillion so far in 2020. 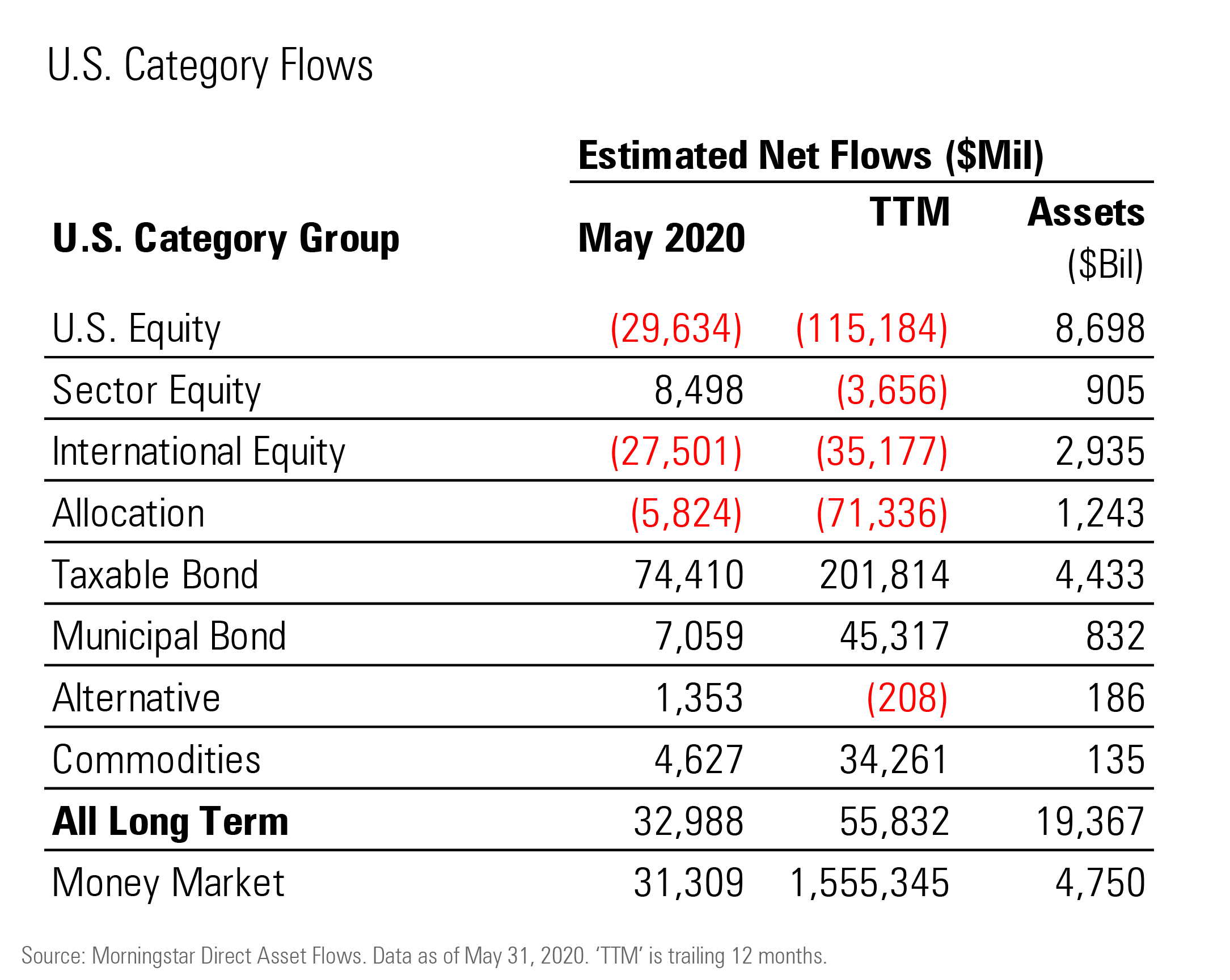 Digging deeper, however, reveals pockets of significant activity. Taxable-bond funds gathered a record $74 billion in May, their third monthly flows record this year. The group previously set an inflows record in January ($61 billion), and it suffered a brutal $240 billion of outflows in March. The Federal Reserve has committed to buying bond ETFs, and investors flocked to funds such as iShares iBoxx $ High Yield Corporate Bond ETF (HYG) in anticipation.

On the equity side, both international- and U.S. equity funds saw significant outflows. Record outflows of $28 billion from international-equity funds in May surpassed the previous record of $20 billion set just one month before. The May tally was almost equally split between actively and passively managed products, and investors made little distinction between developed- and emerging-markets exposure when withdrawing assets.

Meanwhile, U.S. equity funds saw their largest monthly outflows since the global financial crisis. A net $30 billion left those funds in May, the most since $26 billion exited in March 2009. Some of these outflows may be due to rebalancing in the wake of the U.S. stock market's bounce off its March lows. 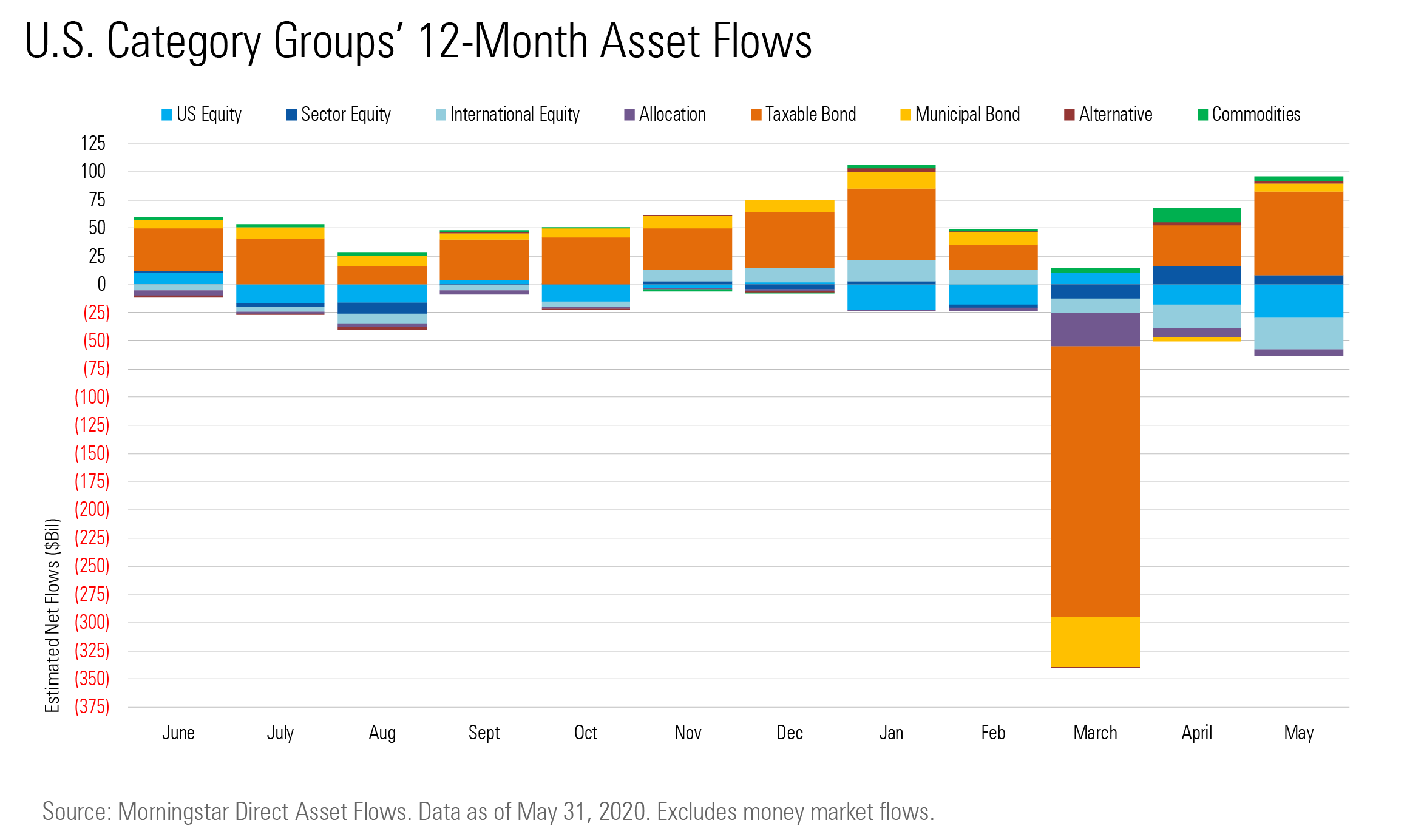 Many allocation strategies seek core equity exposure, and the large-blend funds that offer it (such as Vanguard Total Stock Market Index (VTSAX)) saw net outflows of $17 billion in May. Large-growth funds, by contrast, had their first back-to-back monthly inflows since January/February 2011. Some of the S&P 500's biggest winners in 2020's market turmoil, such as Amazon.com (AMZN) and Microsoft (MSFT), are favorites among large-growth fund managers. 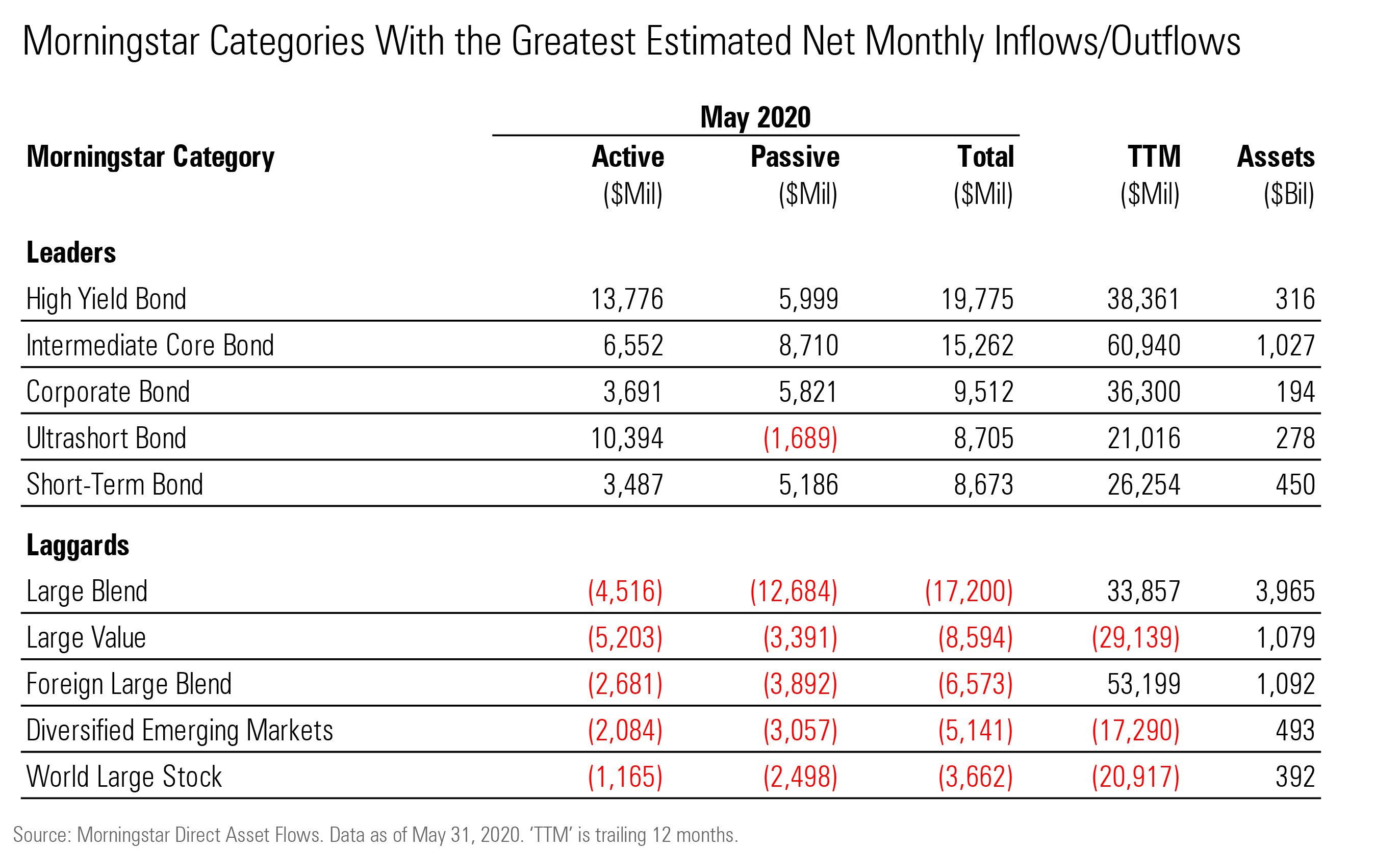 Among fund families, Vanguard regained the top spot in terms of inflows, collecting $8 billion of long-term assets in May. The firm's actively and passively managed funds both benefited. In line with market trends, its taxable-bond funds led the way in asset growth, taking in $16 billion, while its U.S. and international equity funds faced net outflows totaling more than $11 billion. 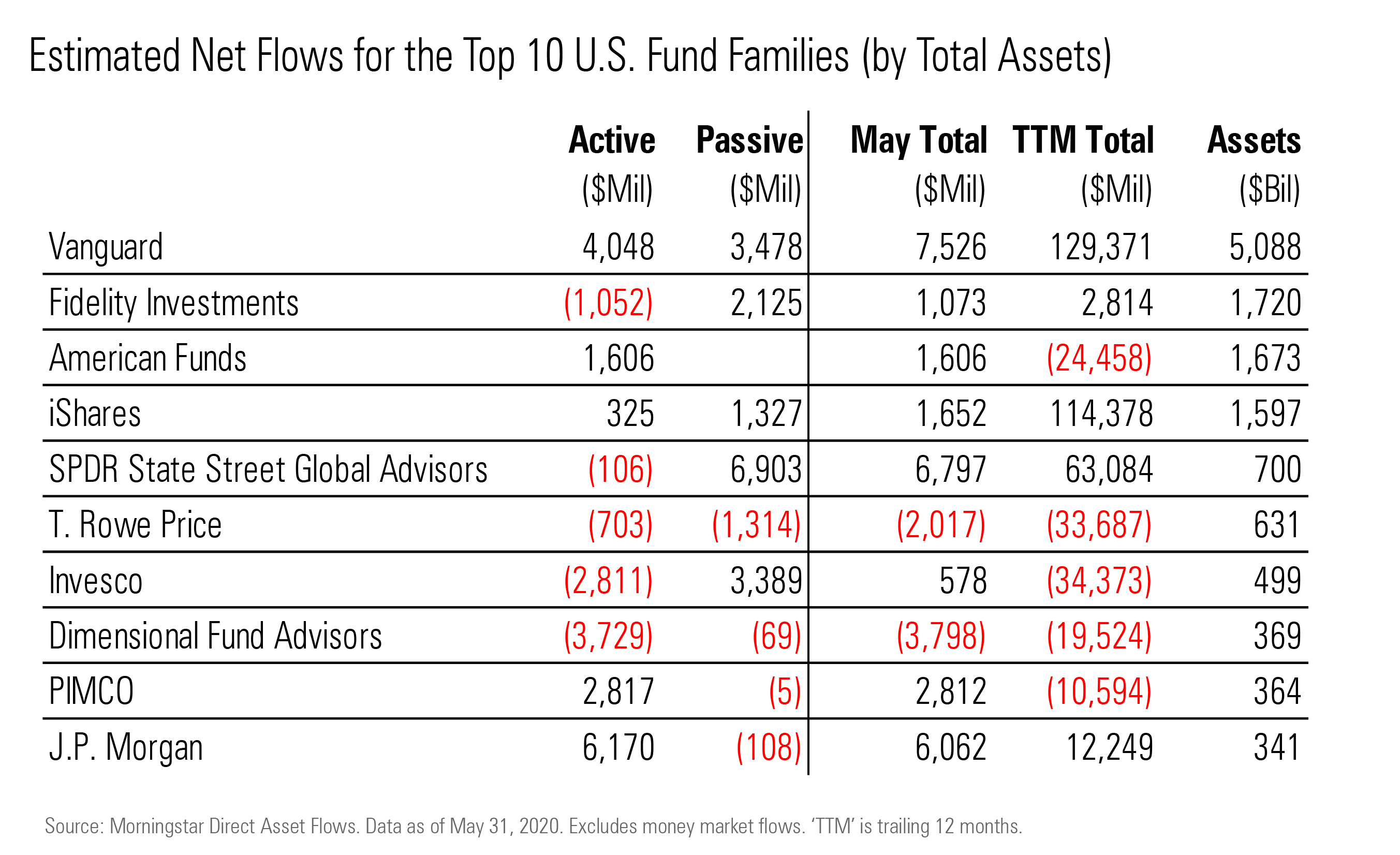 Dimensional Fund Advisors hit a rough patch. The firm, which specializes in offering actively managed, broadly diversified portfolios with a value tilt, had inflows every month from April 2009 through November 2018. Since then, however, outflows have been the norm. Nearly $4 billion left its funds in May, following similar outflows in April and $8 billion of outflows in March.

Oakmark's woes continued. It suffered another $1.4 billion of outflows in May. That's a negative 3% monthly organic growth rate. Oakmark's negative 24% organic growth rate over the past 12 months through May was by far the worst among the 50 largest fund firms by total long-term assets. Morningstar Direct clients can download the full report here.