The Huddled Masses  My April 3 column, “Such a Narrow Stock Market!”, raised an open question.

The article demonstrated how the corporate rich have become even richer. Large-growth equities held up relatively well during the downturn, while most stocks crashed. That behavior, I argued, made sense: The coronavirus crisis has improved the giants’ long-term prospects, because their businesses are virtual.

Left unsaid was the fate of the great unwashed. Morningstar’s U.S. equity database contains 1,838 small-value stocks, which live on the wrong side of the railroad tracks. They mostly do require brick and mortar spaces; their revenues and earnings have drifted; and their stocks have languished. Even after the past three weeks’ rally, their stock prices remain at 2016 levels.

Such businesses are not powerhouses. Their operations may improve, while those of large-growth companies revert toward the mean, but for the foreseeable future the reason to own small-value companies will not be for their earnings growth. It will instead be because companies are not stocks. At the right price, any corporation that isn’t going bankrupt can be a good deal.

Portraying Two Funds Let’s compare the cost of large-growth and small-value stocks. Our two mutual fund proxies will be Vanguard Small Cap Value Index (VSIIX) and Vanguard Growth Index (VIGRX). Below are the trailing 12-month price/earnings ratios for each fund, beginning in December 1999. (Throughout the 1990s, Morningstar published P/E ratios for U.S. equity funds, but it did not store those results. Sad.) 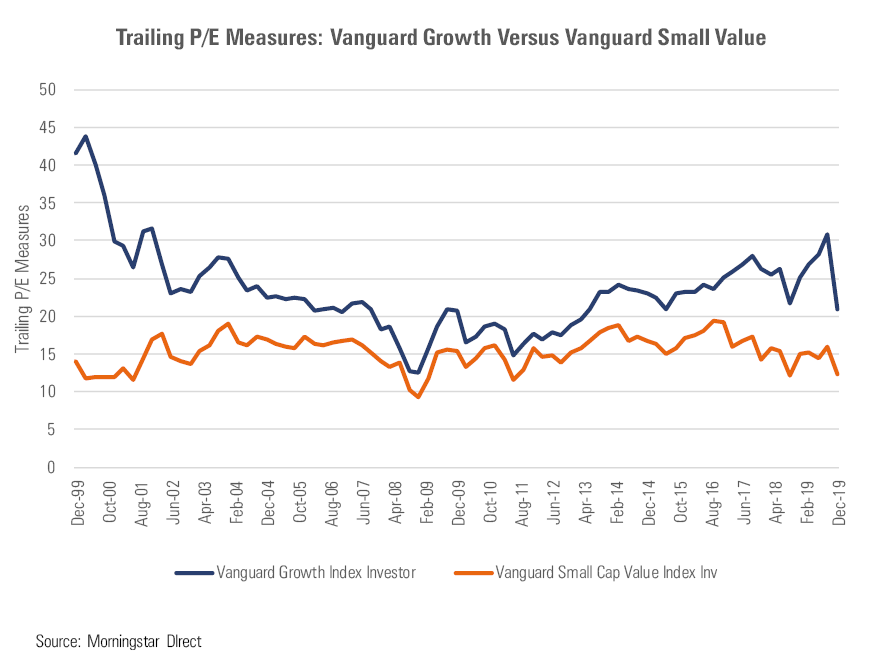 Two notes. First, never mind the numbers. They vary by data provider, because mutual fund portfolio statistics can be computed several ways. What matters is that the two funds are treated consistently, so that reported differences between their ratios are genuine. Second, although this graph otherwise uses quarterly data, its final point is Friday, April 10, rather than March 31. As small-value stocks enjoyed a strong early-April rally, I wished to incorporate those results into the analysis.

Translating the Lines Onto the interpretation. The big picture is straightforward:

1) The New Era was crazy! Indeed. Here’s a general investment rule: When the stocks in one fund cost 3 times as much as those of another, strongly consider swapping from the former to the latter. That counsel would have paid off handsomely in 1999, as Vanguard Small Cap Value Index crushed Vanguard Growth Index over the next several years.

2) This is not the next New Era! Not even close. Over the past couple of years, the gap in P/E ratios between large growth and small value has become bigger than at any time since the early 2000s, but it remains far lower than during the New Era. At worst, current investors are overly fond of today’s stock-market darlings, whereas New Era shareholders were the investment equivalent of cultists. (Including a proclivity for death threats, which they sometimes sent to Morningstar’s more bearish equity analysts.)

That’s it. There’s nothing else to be learned from that chart, even with the benefit of hindsight. Its one remaining indication might be to buy growth from 2009 through 2012, when the two funds’ ratios most closely converged. But that signal would have been unhelpful. Large growth performed its relative best after 2014.

One can also view a ratio of the ratios, obtained by dividing the large-growth P/E by the small-value P/E. The resulting picture is gratifyingly simple. 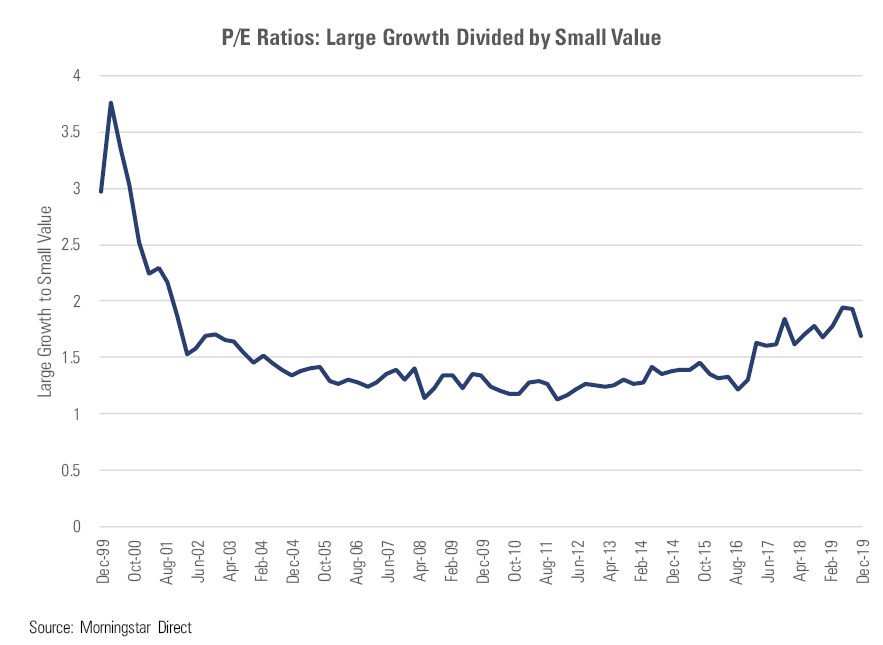 The single line confirms the previous impressions. As measured by relative P/E ratios over the past 15 years, small-value stocks look to be somewhat more attractively priced than large-growth stocks, but the margin is slim. The evidence does not suggest that small-value stocks will annihilate the competition over the next five years, as they did exiting the New Era. 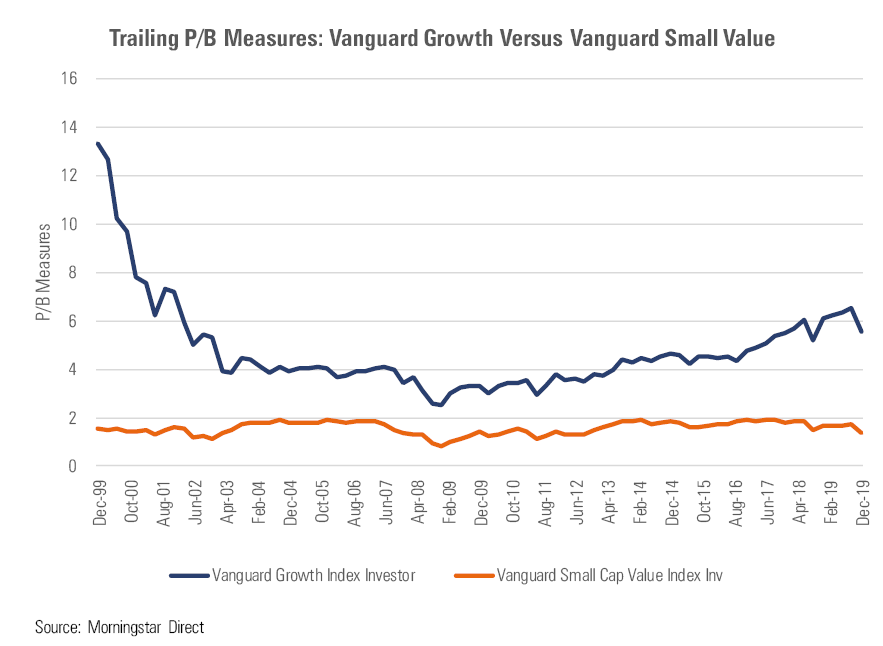 That diagram looks mighty familiar. Just as before, the New Era disparity in valuations was massive. The gap then shrunk precipitously, until leveling off for more than a decade. In recent years, the level has begun to rise again, but it remains much smaller than during the New Era. The lesson is the same as when using P/E ratios.

(A side item: Those P/B ratios for small-value stocks have been remarkably steady! The ratios for large-growth companies have ebbed and flowed, partially owing to investor fashion and partially because over time the consensus has been become more enthusiastic about such firms’ business prospects. But Vanguard’s small-value stocks trade at about 1.5 their book values, year in and year out.)

Once again, we can streamline the view. The line below depicts Vanguard Growth Index’s P/B ratio divided by Vanguard Small Cap Value Index’s. 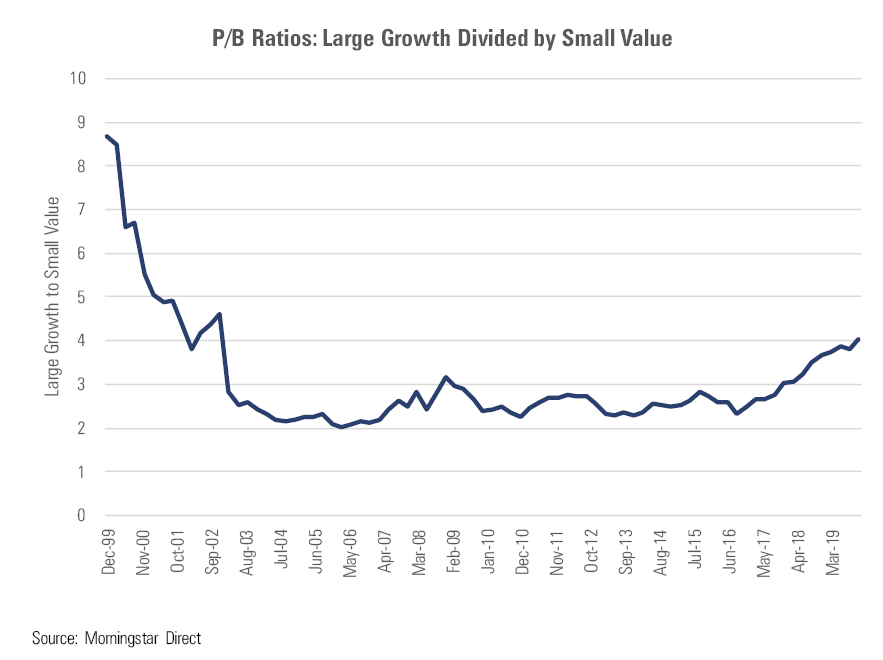 Looking Forward That chart should give small-value investors some cheer. The final point is well above any position reached since 2003, thereby suggesting that perhaps small-value stocks are due to recover some of their lost ground. The signal is not forceful, as the line could rise for several more years before approaching its previous high, but it at least can be observed.

On the other hand--you must have known a caveat was coming--one could argue that the P/B ratios for large-growth companies have risen because their businesses have become more profitable. Paying the same P/E multiple for higher earnings increases a stock’s price, and therefore its P/B ratio, but that is hardly speculation. It is instead justly rewarding success.

For me, this column’s opening question does not have a clear and obvious answer. The evidence tentatively suggests that small-value stocks will outgain large-growth competitors over the next three to five years. However, I would not wager heavily on that outcome, nor would I expect the margin of victory to be high.

John Rekenthaler does not own (actual or beneficial) shares in any of the securities mentioned above. Find out about Morningstar’s editorial policies.