Upgrades  Laudus U.S. Large Cap Growth (LGILX) looks for a mix of dominant if pricey market-share takers, sustainable growers trading at temporary troughs, and more economically sensitive companies. It moves nimbly among the three buckets depending on what appears attractive but also keeps turnover moderate. The fund has proved its worth over manager Lawrence Kemp's 16 years here. A reasonable price tag doesn't hurt, either. The fund's rating was raised to Silver from Bronze.

JPMorgan Global Allocation (GAOSX) plies a time-tested approach that combines quantitative modeling with qualitative inputs to formulate tactical views on 24 asset classes and four currencies. The management team implements these views with futures and options so as not to disturb the fund's current roster of 13 underlying managers. The squad will completely exit an asset class when it sees trouble but will invest at least 40% of assets in foreign securities. Such tactical efforts have paid off over multiyear periods, supporting an upgrade in the fund's rating to Silver from Bronze.

PIMCO StocksPLUS Small (PSCSX) is a unique proposition. It tracks the Russell 2000 Index and supplements returns with an actively managed bond sleeve. For equities exposure, the fund holds Russell 2000 Index futures. That has boosted the fund's performance, as demand to short the index (as a proxy for shorting small-cap stocks) tends to be higher than the demand to take a long position. Meanwhile, the bond portion is in the capable hands of long-tenured manager Mohsen Fahmi, who employs long and short positions across global credit, rates, and currencies and is mindful about reducing that sleeve's correlation to equities. The fund's long-term results have handily outperformed the Russell 2000 Index. Its rating was bumped to Bronze from Neutral.

Downgrades Comanager Elizabeth Jones' departure in August 2018 was a blow to  Buffalo Discovery (BUFTX). She had applied her medical training and investment acumen since 2004 to researching healthcare stocks, which is an important part of this fund. Plus, Jones and her two comanagers had been an anchor here amid personnel turmoil elsewhere at subadvisor Kornitzer Capital Management. The three managers made decisions as a team, so the remaining co-heads are familiar with the healthcare sector, but it's unclear how Jones' departure will affect the fund's investment style. Its rating was downgraded to Neutral from Bronze.

New Ratings Investors should be aware that  PIMCO High Yield Spectrum (PHSIX) has a much higher non-U.S. exposure relative to the typical high-yield bond peer, but it's a compelling option, outstripping its average peer over multiyear periods. With a disciplined approach to valuation, the fund has uncovered mispriced bonds with underappreciated fundamentals and avoided trouble spots. For example, PIMCO's deep analyst bench raised concerns about the energy sector well before oil prices plunged in late 2014, and management's timely allocation to lower-quality debt bolstered the fund's performance in 2016. Attractive fees further add to this fund's appeal. It receives an inaugural rating of Silver.

Harbor Small Cap Growth (HASGX) receives a Bronze rating. Westfield Capital Management, the fund's subadvisor since its 2000 inception, is a stock-picker's shop: potential investments are debated in sector-level groups before being brought to a broader committee. Under veteran manager Will Muggia, this 18-member team uses a valuation-sensitive, benchmark-conscious approach to look for small-cap firms with accelerating earnings and sufficient cash flow to fund growth. The fund's recent performance hasn't stood out against peers, though that's not necessarily surprising given its emphasis on valuation. With below-average fees and a reasonable asset base, the fund remains a serviceable small-cap option. 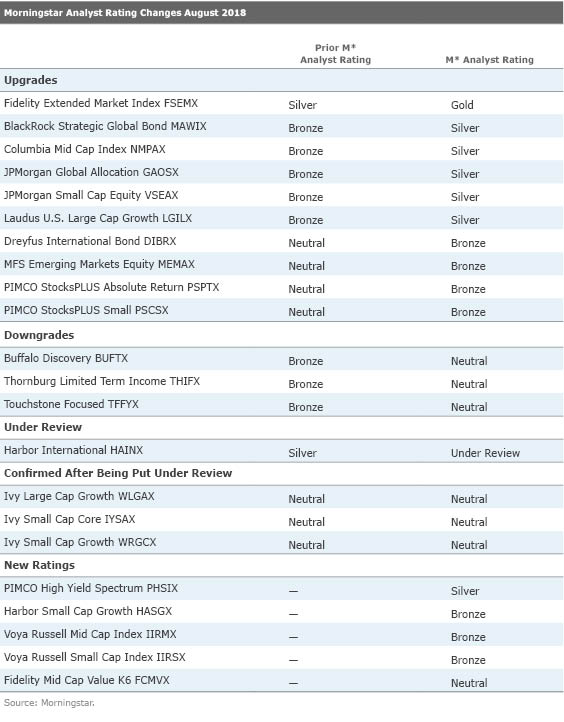 Shannon Yan does not own shares in any of the securities mentioned above. Find out about Morningstar’s editorial policies.