A version of this article was published in the October 2016 issue of Morningstar ETFInvestor. Download a complimentary copy of ETFInvestor here.

Many attribute active stock-pickers' collective struggles to best index funds to the overall level of efficiency of the market--particularly for U.S. large-cap stocks. Efficiency in this case is meant to indicate the speed and precision with which market participants incorporate new information (economic news, earnings data, and so on) into stock prices (by selling on bad news, buying on good news). Furthermore, given advances in information technology and the growth in the portion of investable assets managed by an increasingly skilled set of professional investment managers, it can be argued that the market has become ever-more efficient over time.

But market-cap-weighted indexes' greatest strength can also be their greatest weakness. By owning "the market," investors are relying on other market participants to price stocks on their behalf. During long stretches of time, investors have done a good job of valuing stocks, but these long horizons have been marked by episodes of mania and panic. The mania most often cited as an example of the draw­backs of owning a cap-weighted index like the S&P 500 outright was the technology bubble. Episodes like this are unavoidable for index investors and create opportunities that have historically been exploited by (some) active managers.

Parting With Price The concept of "breaking the link with price," as Research Affiliates' founder and chairman Rob Arnott would phrase it, when weighting stocks in an index surged in popularity following the bursting of the tech bubble. At the top of the tech craze in 2000, the sector represented about a third of the overall market capitalization of the S&P 500, as valuations for most technology stocks reached insane levels. As investors got up off the floor and began dusting themselves off after the crash, the asset-management industry--as it so often does--mobilized to equip them with the weapons they'd need to fight the last war. In the case of exchange-traded funds, this resulted in a boom in new strategic-beta funds, with PowerShares and WisdomTree leading the charge. The common theme among most of these new funds was that the indexes they track do not weight their constituent stocks on the basis of their market cap, but rather some other fundamental measure of their worth, such as book value, cash flow, sales, dividends, or earnings.

Weighting stocks according to their fundamentals as opposed to their going prices made a lot of sense to people who had recently been sold on dot-com stocks on the basis of some ginned-up "valuation" measure related to clicks or eyeballs. However, fundamentally weighted indexes were not the first to decouple their weighting methodology from stock prices; they were preceded by something far simpler--equal-weighting. 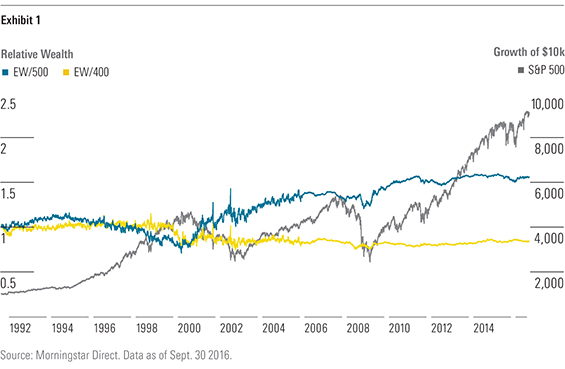 1/n Diversification If diversification is the only free lunch in investing, then equal-weighting (also known as naive diversification) is a gratis, no-frills noontime meal. As its name implies, it involves assigning an equal weighting to each security in a given selection universe. The math is simple. If n is equal to the number of securities in the selection universe, then each security's weighting will be equal to 1/n. In the case of  Guggenheim S&P 500 Equal Weight ETF (RSP), this means that the fund's largest holding,  Apple (AAPL), which has a market cap of $625.3 billion, receives the same initial weighting (1/500 or 0.2%) as its smallest holding,  Owens-Illinois (OI), which has a market cap of $2.8 billion.

If the goal is diversification, equal-weighting does the trick. The approach can avoid issues stemming from single-security-, sector-, and country-level concentration. For example, while the tech sector accounted for about a third of the cap-weighted S&P 500 at the peak of the dot-com bubble, it was never more than 14.5% of the equal-weighted S&P 500. Similarly, in the runup to the global financial crisis, the financials sector swelled to represent 22.4% of the value of the S&P 500. Financials stocks never represented more than 18% of the equal-weighted index.

Speaking strictly in terms of diversification, equal-weighting seems like it is a free lunch. But is it one that will leave investors satisfied?

As you'll notice, the line slopes steadily downward from the mid-1990s through the turn of the millennium as the cap-weighted S&P 500 (the growth of which is plotted on the right-hand vertical axis in Exhibit 1) surged higher thanks to expanding multiples in the tech sector. The line's slope then turns upward beginning in March 2000 as the air began to escape from the balloon. Equal-weighting looked silly (along with value strategies and other sensible approaches to stock-picking) on the way up but paid off big as the bubble burst.

Case Closed? Not so fast. While equal-weighting addresses concerns related to single stocks, sectors, and so on, its predominant effect on the composition of the index's portfolio relative to its cap-weighted parent is to give greater weightings to smaller stocks. According to S&P Dow Jones Indices, the top 10 constituents of the S&P 500 accounted for 18.1% of the index's value as of Sept. 30, 2016, while the top 10 stocks in the equal-weighted version accounted for just 2.2% of the index's value. Over the long term, this skew toward smaller-cap names has yielded greater returns relative to the cap-weighted S&P 500 at the cost of relatively greater volatility. In other words, from a diversification, risk, and return perspective, the equal-weighted S&P 500 looks an awful lot like a mid-cap portfolio.

In Exhibit 2, I've included some figures measuring the performance of a pair of ETFs that track each bench­mark: RSP, which follows the S&P 500 Equal Weighted Index, and  iShares Core S&P Mid-Cap (IJH), which tracks the S&P MidCap 400 Index. On both an absolute and risk-adjusted basis, the funds produced remarkably similar results during the 10-year period ended Sept. 30.

The data in Exhibit 3 provide a better sense of what's driving the similarities between the two funds' performance. Using the Fama-French factor regression analysis tool on Portfoliovisualizer.com (one of my favorite free online tools), I've run a standard Fama-French three-factor regression to distill each fund's trailing 10-year returns into its constituent factors. Given the fact that both funds skew further down the market-cap spectrum, the results are what you might expect. Both funds have betas above 1 and statistically significant size exposure (they're picking up the small-cap premium).

If RSP and IJH are effectively indistinguishable from one another on the basis of their risk/return profiles and factor loadings, then why would an investor choose one over the other? It is awfully difficult for me to see the case for investing in an equal-weighted fund like RSP for two key reasons. The first is straight­forward: RSP is much more expensive. Paying a fee of 0.40% for a fund that will likely continue to yield results substantially similar to one that charges 0.07% is difficult to justify. Interim bouts of under- or outperformance of one fund relative to the other are inevitable over the long term, but fees are forever. The second reason is more context-specific. Depending on the makeup of an investor's portfolio, investing in an equal-weighted fund like RSP might actually detract from the overall level of diversification at the portfolio level. Specifically, if an investor already has an allocation to U.S. large-cap stocks, adding RSP to the mix will likely just layer on additional exposure to many of the same names. The constituents of the S&P MidCap 400 Index are, by design, completely distinct from those of its large-cap sibling. Thus, an investment in a dedicated mid-cap fund reduces the likelihood of overlap with existing large-cap allocations and stands to improve overall portfolio diversification. 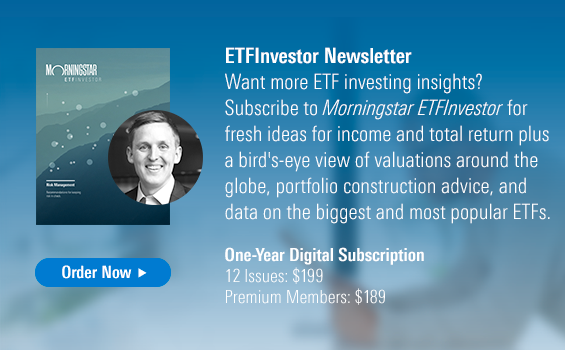 Ben Johnson has a position in the following securities mentioned above: IJH. Find out about Morningstar’s editorial policies.