Long-term fund flows—including open-end mutual funds and exchange-traded funds, but excluding money market funds—collected a fairly modest $54.9 billion in third-quarter 2019, down from the first quarter’s $136 billion and the second quarter’s $93 billion. The decline in quarterly flows suggests that investors were more interested in safety rather than additional gains.

This quarter-over-quarter decline in long-term flows was perhaps somewhat surprising given that the Fed cut its target rate by a quarter point at the end of July and again in September. After all, the thinking goes that lower rates tend to push investors into riskier assets.

But that didn’t happen. In the third quarter, investors poured a whopping $225.2 billion into money market funds—the strongest quarterly inflows since the 2008-09 financial crisis. On a larger scale, money market funds have collected $529.8 billion in inflows over the trailing 12 months—the greatest they’ve seen in at least 10 years. 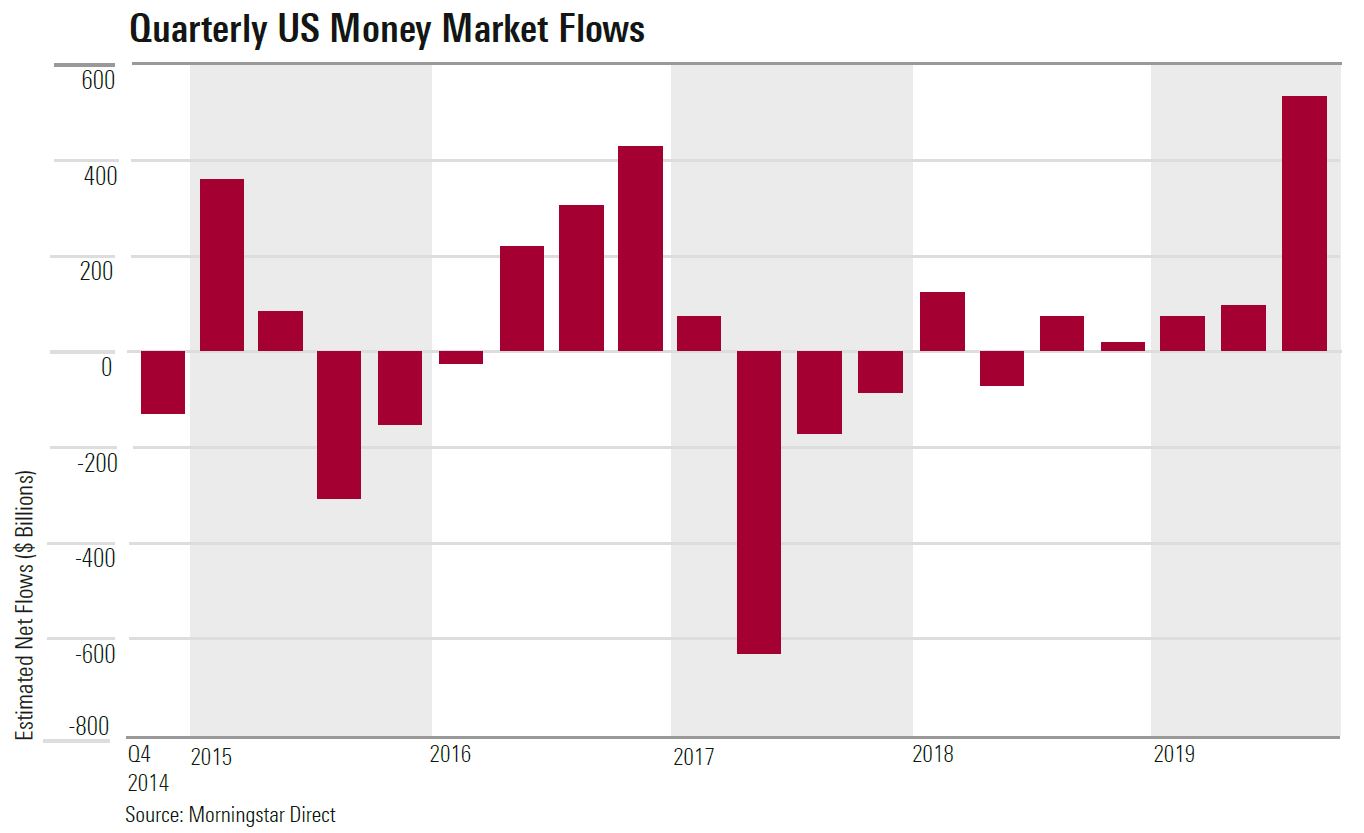 It’s difficult to know what is behind this torrent of money market flows, but it’s likely not due to rebalancing, as money market funds don’t play much of a role in target-date funds or other managed portfolios.

Instead, this surge could be driven more by investors (likely those in or nearing retirement) liquidating assets. It could also signal increasing risk aversion, which has been visible in recent years as money has left equity funds in favor of bond funds and money market funds. Plus, with the yield curve relatively flat, investors haven’t sacrificed much yield in choosing a money market fund over a short-term bond fund.

On the other hand, in the third quarter, U.S. equity funds had their third-greatest quarterly outflows ($29.0 billion) of the past five years. This was despite the S&P 500 gaining about 1.7% for the quarter.

These outflows might be attributed to target-date funds and other managed portfolios rebalancing and trimming their U.S. equity exposure to bring their asset allocations in line with their targets. But, similar to the trends in money market flows, they could also reflect greater risk aversion and even some liquidation as investors begin drawing on their savings.

From a historical context, the quarter’s outflows were even worse for international equity funds. This group had $18.2 billion in outflows, their greatest in at least 10 years. Sector equity funds had outflows of $13.4 billion, marking their second-worst quarter (after fourth-quarter 2018) of the past 10 years.

Meanwhile, long-term inflows continue to go overwhelmingly into taxable-bond and municipal-bond funds, which collected $93.0 billion and $25.3 billion, respectively, in the third quarter. This is another reflection of investors’ risk aversion.

Specifically, investors generally aren’t stretching as much for yield as they were in prior years. High-yield funds garnered a solid $5.5 billion, but over the trailing 12 months inflows have been essentially flat.     Instead, investors continue to target core strategies and conservative satellite strategies. Intermediate- core bond and core-plus bond funds collected a combined $48.3 billion, followed by $10.3 billion for short-term bonds and $10.1 billion for intermediate-government funds. This was the biggest quarterly haul for short-term bond funds since first-quarter 2013. 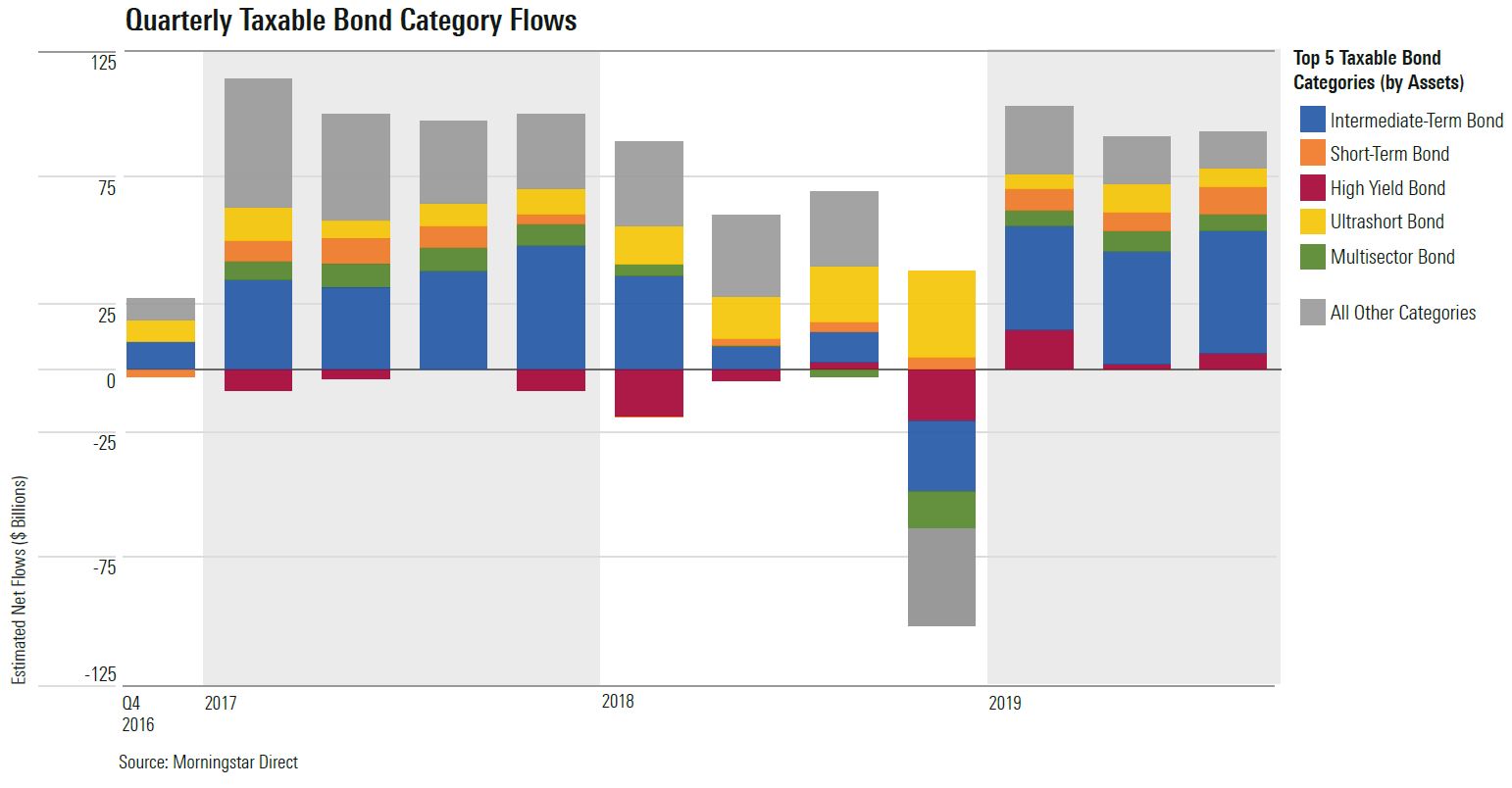 Commodity funds and bond funds were the only groups with net inflows in the third quarter. Investors shoveled nearly $7.7 billion into commodity funds, the most since first-quarter 2016. The leading subgroup was commodities precious metals funds, which collected $9.7 billion in inflows—the segment’s best showing in at least 10 years. This strong demand likely reflects some investors’ inflation concerns, perhaps fueled by the Fed’s decision to cut rates. 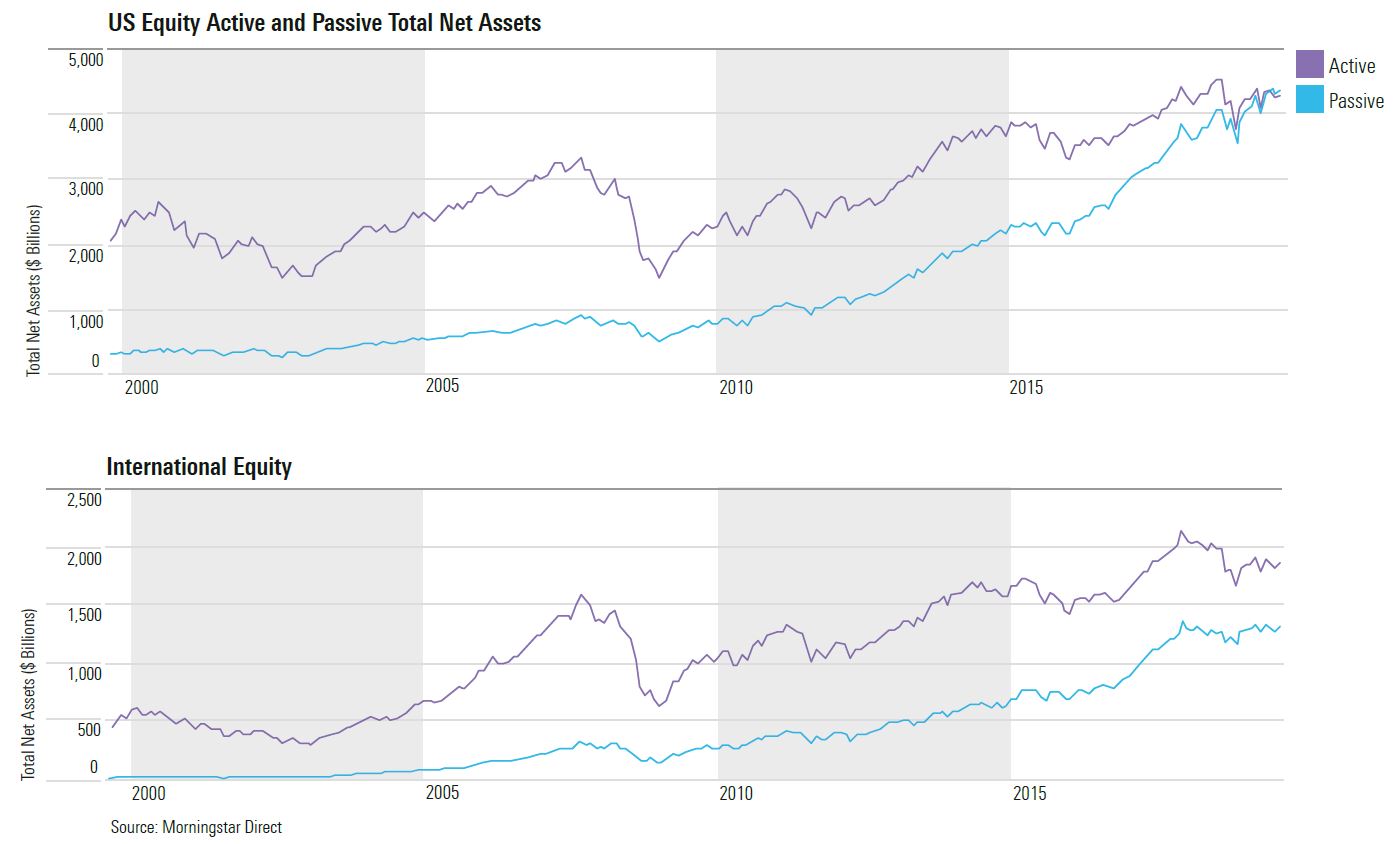 This milestone has long been expected as the trend toward low-cost fund investing has gained momentum. Active U.S. equity funds have had outflows every year since 2006, with roughly equivalent inflows into passive funds during the same period. Specifically, over the past 10 years, active U.S. equity funds had about $1.3 trillion in outflows while their passive counterparts had about $1.4 trillion in inflows.

To learn more, download the Morningstar Fund Flows Commentary.
Get My Copy

The opinions expressed are as of the date written and are subject to change without notice. Except as otherwise required by law, Morningstar shall not be responsible for any trading decisions, damages or other losses resulting from, or related to, the information, data, analyses or opinions or their use.

The information contained herein is the proprietary property of Morningstar and may not be reproduced, in whole or in part, or used in any manner, without the prior written consent of Morningstar. Investment research is produced and issued by subsidiaries of Morningstar, Inc. including, but not limited to, Morningstar Research Services LLC, registered with and governed by the U.S. Securities and Exchange Commission.