Though national equity-market indexes are often cited as barometers of their countries’ economic health, markets and economies are very different things. A stock market is a collection of individual companies, whose fortunes are shaped by forces macro and micro, fundamental and technical, domestic and foreign. In today’s globalized economy, where a company is domiciled or listed may not necessarily reflect where it does its business.

The Morningstar Revenue Atlas applies data from the Revenue Exposure by Region tool to Morningstar’s family of 46 country-specific equity indexes to illuminate the linkages spawned by an interconnected global economy.

The below map demonstrates that country indexes vary considerably in terms of their geographic sources of revenue. Investors can use this data to better understand their risk exposures, manage portfolio diversification, and identify opportunities. 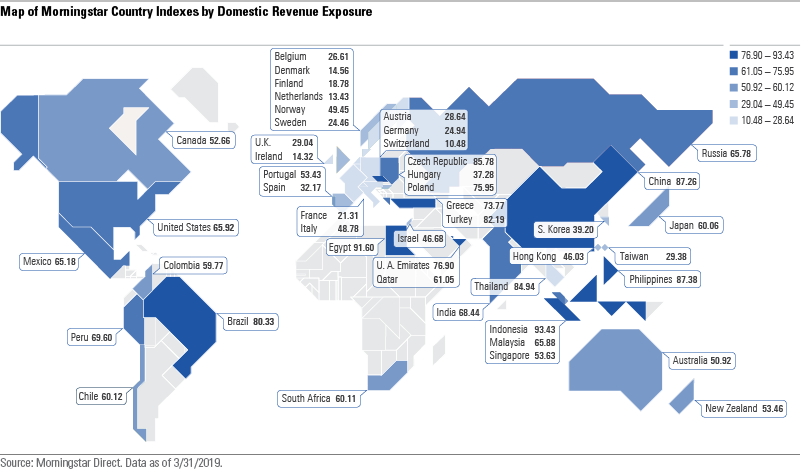 Insights on country indexes from the Morningstar Revenue Atlas

Country indexes based on geographic source of revenue

The next step is to create revenue-weighted indexes that select companies based on geographic source of revenue. For example, a U.K. index weighted toward companies with domestic revenue sources would behave far differently than the actual Morningstar U.K. Index, where 70% of revenue comes from outside national borders. Revenue-weighted indexes would function as a tool for both analysis and investment.

​​​​​​​ Dan Lefkovitz is a strategist for Morningstar's Indexes group.

For the full analysis of these country indexes’ revenue exposure, download the Morningstar Revenue Atlas.
Get My Copy