Long-term mutual funds and exchange-traded funds took in $70 billion in June 2020 and $121 billion for the quarter, recovering more than a third of the record $327 billion that left those funds in March. Meanwhile, money market fund assets dropped by $134 billion in June.

For much of 2020's second quarter, equity and bond indexes marched higher in a recovery from the market's March lows. But a split in fund flows emerged in June: Many fixed-income funds collected assets, while U.S. and international-equity funds suffered outflows. As a result, taxable-bond funds had their greatest quarterly inflows according to data going back to 1993; meanwhile, U.S. and international-equity funds had their worst outflows ever. 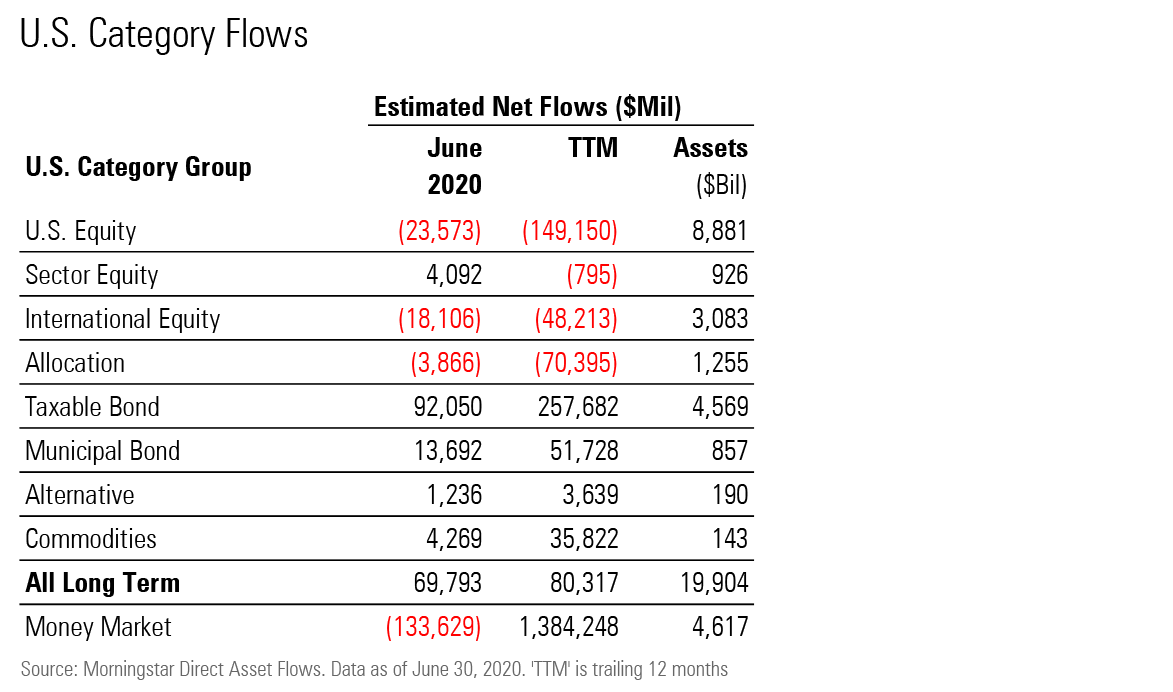 Taxable-bond funds netted $92 billion for the month, surpassing the previous record of $75 billion set in May. The group's $204 billion of net inflows for the quarter was the most in 27 years of data. It was also a sharp reversal of fortunes. The cohort's $240 billion of outflows in March alone had made 2020's first quarter its worst ever.

By contrast, U.S. equity funds lost $24 billion to outflows in June, perhaps because of rebalancing, as the S&P 500 returned 20.5% in the second quarter. While the loss wasn't as bad as May's record of $30 billion, it pushed U.S. equity's quarterly redemptions to a $72 billion record, surpassing the previous record of $55 billion set in 2009's first quarter (as stock markets approached their lowest point during the global financial crisis).

Outflows also stung international-equity funds. Their $18 billion of outflows in June capped a quarter in which they suffered a record $65 billion of outflows. That quarterly tally was more than double the previous record and tied for its worst organic growth rate (negative 2.5%) since 1993. 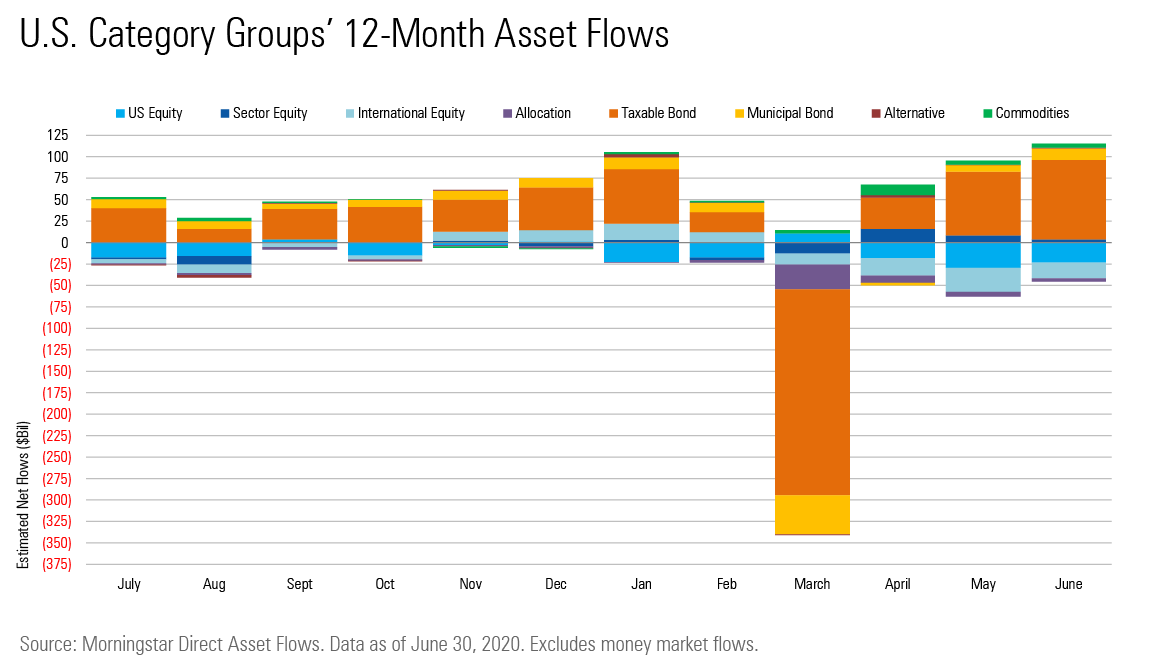 Taxable-bond categories dominated the list of asset gatherers. Intermediate core bond funds collected a record $23 billion in June, with more than 70% going to broad, passively managed index funds. This surge partly owed to the Federal Reserve ramping up its purchases of corporate-bond ETFs. That activity helped spur $14 billion of inflows into corporate-bond funds in June. Those funds hauled in a total of $31 billion from April through June--far and away their best quarter ever. 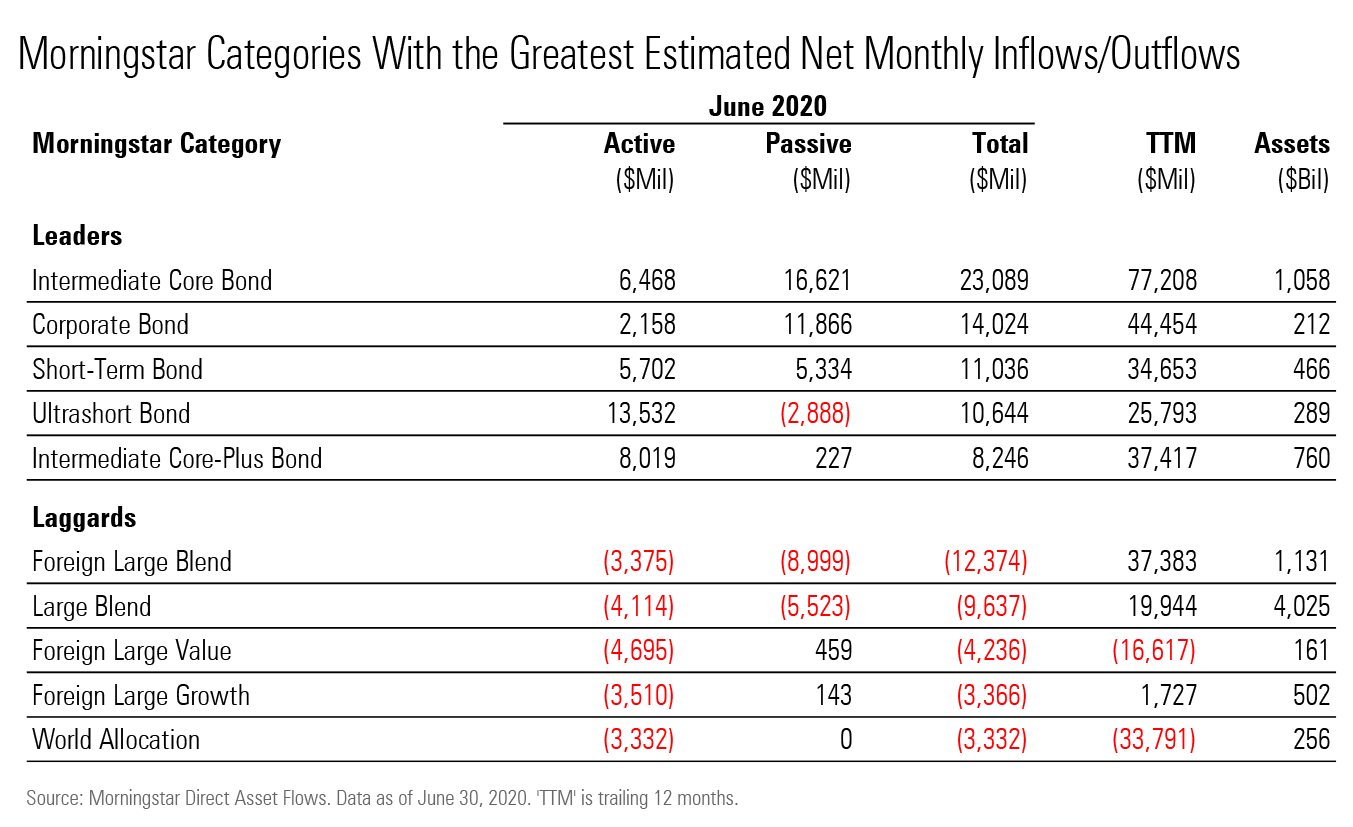 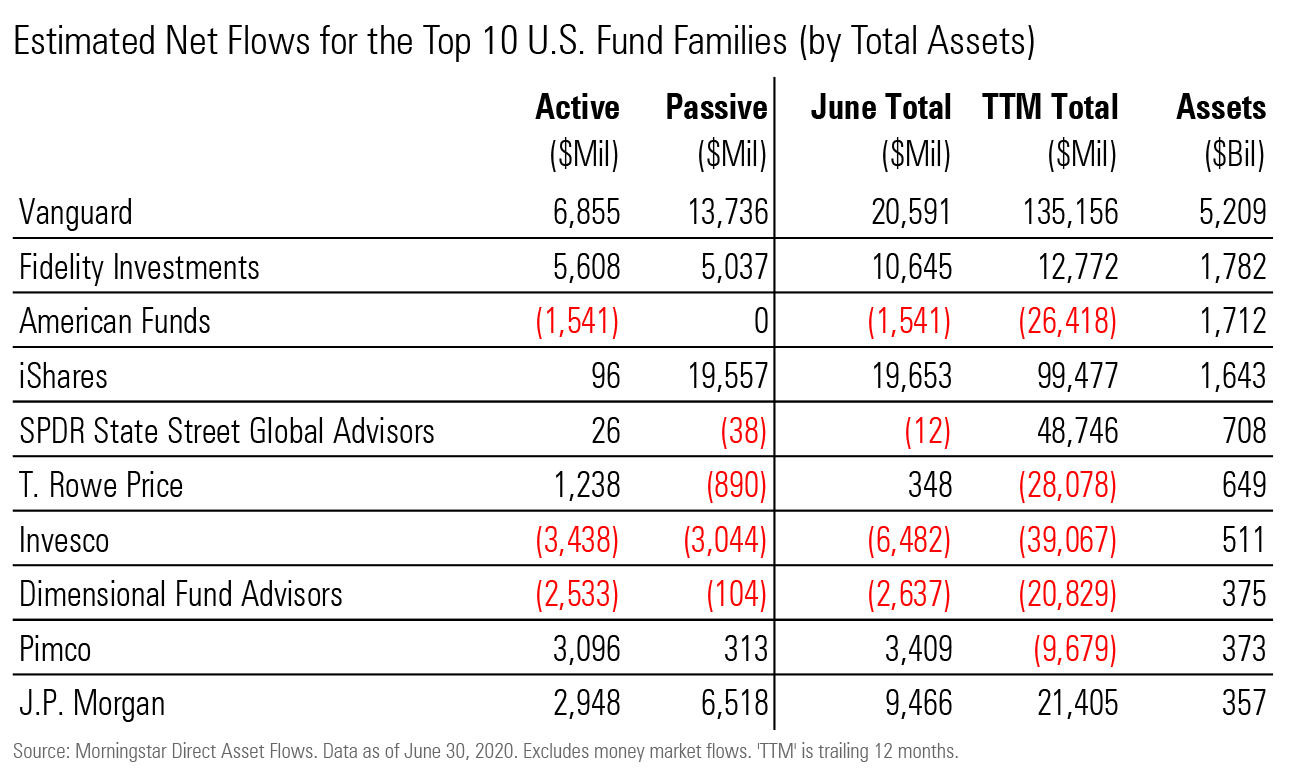 Vanguard came in a close second with nearly $21 billion of inflows. The firm benefited from investors' interest in taxable-bond funds. Four of its broad index funds took the top spots on the list of funds with the greatest inflows in June. Three were taxable-bond offerings: Vanguard Total Bond Market Index (VBMFX), Vanguard Intermediate-Term Corporate Bond Index (VICSX), and Vanguard Total Bond Market II Index (VTBIX). Fidelity pulled in $11 billion in June--its second-best month in the past decade behind January 2018. The $5.6 billion that entered its actively managed funds marked their best month in more than 24 years. 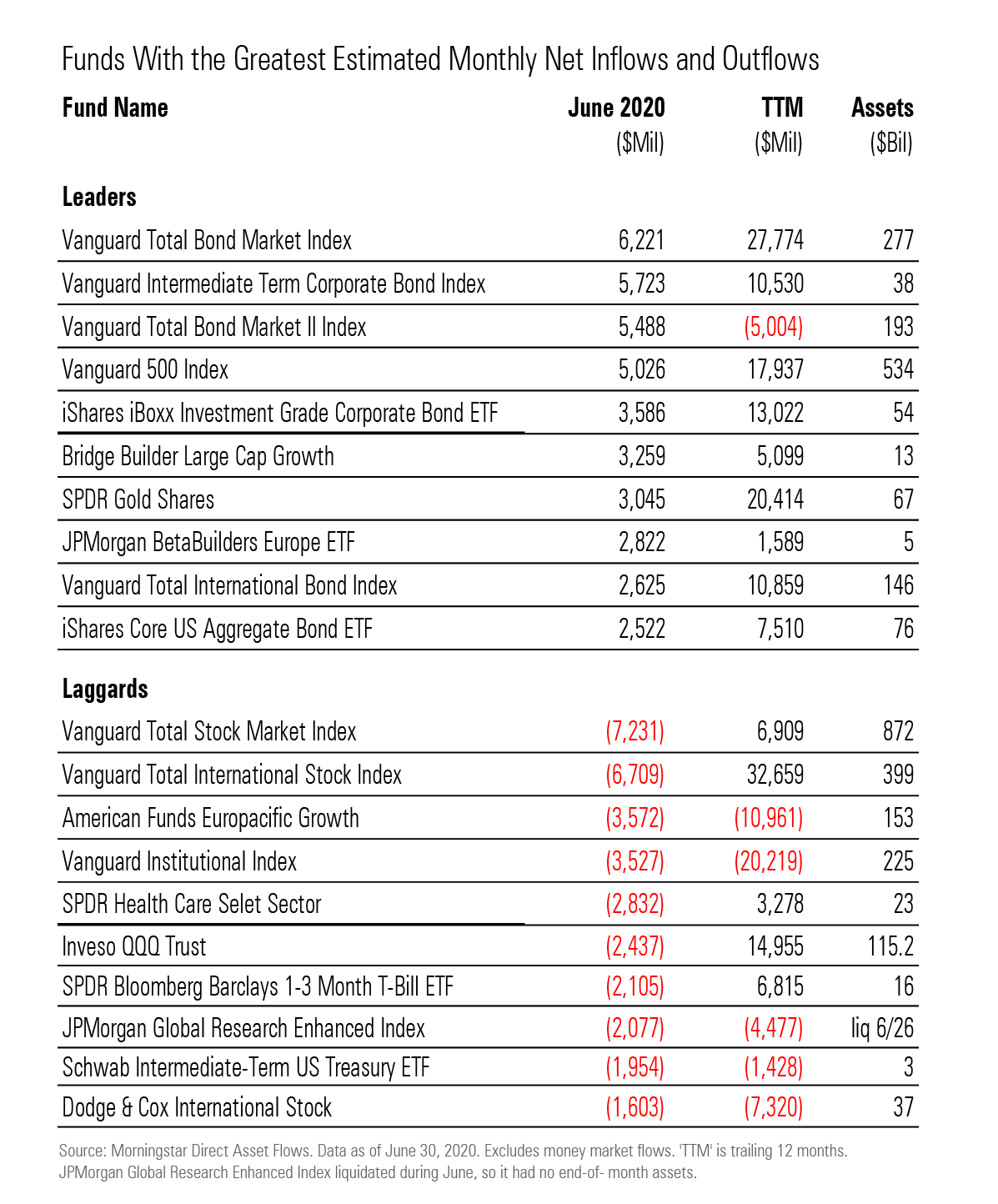 Dodge & Cox's outflows steepened to nearly $3 billion in June (from $2 billion in May). Modest inflows into its fixed-income funds couldn't offset heavy outflows from Dodge & Cox Stock (DODGX) and Dodge & Cox International Stock (DODFX). Both value-leaning funds stumbled in the pandemic-driven sell-off in early 2020 as economic shutdowns and slashed interest rates threatened their energy and financials stakes, among others. The firm has suffered net outflows for 13 consecutive months.

Invesco also continues to shed assets. Investors yanked more than $6 billion from the firm's lineup in June. Invesco has had net outflows in 17 of the 21 months since announcing its acquisition of Oppenheimer in October 2018. More than two thirds of the combined entity's assets were in U.S.- and international-equity funds in June, and like the broader market, both saw strong outflows during the month.

Tony Thomas has a position in the following securities mentioned above: DODFX. Find out about Morningstar’s editorial policies.