The coronavirus has altered the way we work and live--and it has created an economic emergency. Stocks have fallen into a bear market, the Federal Reserve has taken unprecedented steps to help markets function efficiently, and companies are cutting staff.

Investors may want to take advantage of the market sell-off, but how can they isolate those companies best equipped to ride out the uncertainty?

To that end, we’ve put together a list of stocks with fortress balance sheets--a term popularized by JP Morgan’s Jamie Dimon. Specifically, we asked our analysts to provide two picks from their respective sectors that have sturdy financial foundations--balance sheets that can withstand financial shocks such as the one we’re experiencing--and that were undervalued according to our metrics. (Note that Adobe (ADBE) made the initial list, but it has since moved into 3-star territory, suggesting it is fairly valued as of this writing.) 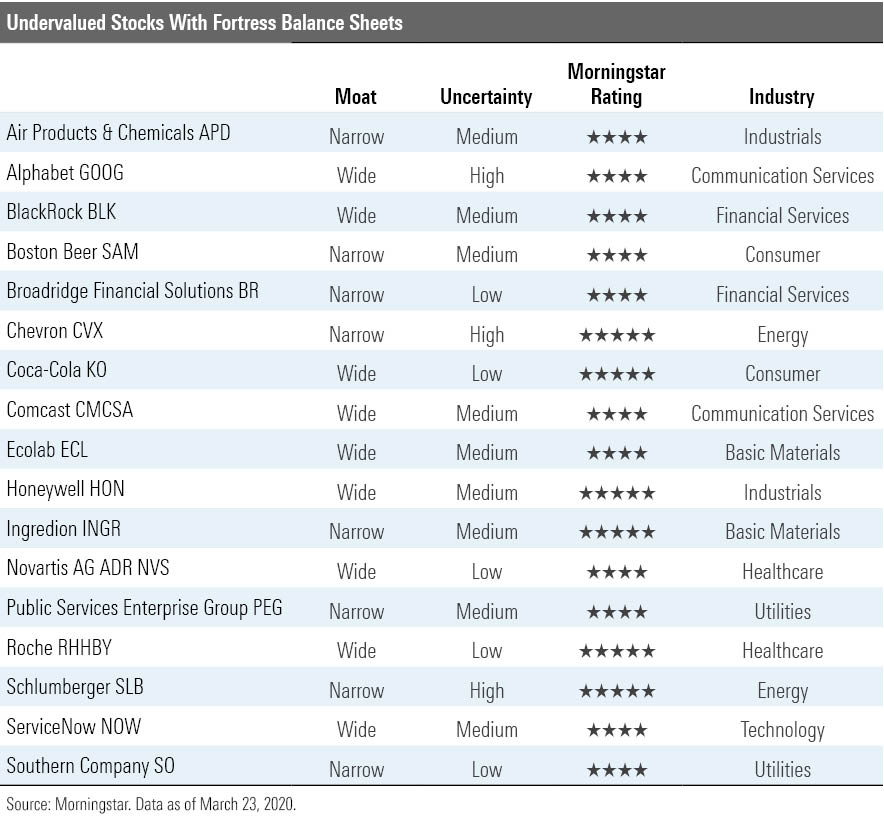 Here’s a little bit about three of the names from the list.

Coca Cola (KO) “With markets reeling from the worldwide outbreak of COVID-19, we believe investors have been struggling to pin down the business implications for putatively defensive names, particularly global operators with exposure to multiple retail channels like wide-moat Coca-Cola. There are countervailing forces to consider, for example, weak on-trade sales (restaurants, travel) on one hand and a strong off-trade on the other. Still, Coke has acknowledged that the aggregate impact will likely skew toward the negatives, and it no longer expects to achieve its 2020 guidance (5% and 8% growth in currency-neutral revenue and operating income, respectively). We plan to reduce our $57 fair value estimate to around $54, reflecting near-term growth and profitability headwinds. Still, at current levels, shares look exceedingly compelling and would still be in 5-star territory. Ultimately, we continue to view Coca-Cola as superbly positioned from a competitive standpoint, and see it as high-quality play in this precarious economic environment.

"As the virus has metastasized, the limited readthroughs we’ve received from the beverage space have been mixed. For example, Coke’s announcement makes for an interest contrast to that of narrow-moat Keurig Dr Pepper, or KDP, which just yesterday maintained its full-year guidance. For the latter, then, it would seem that, for now, the cons (a weaker on-trade) will be largely neutralized by the pros (off-trade strength driven by household stock ups). Geographic exposure represents a key distinction between the two, as Coke derives just over 30% of sales (and an even lower proportion of profits) from North America, whereas KDP is effectively a U.S. pure play. Commentary from wide-moat PepsiCo has been sparse, and we plan to maintain our $140 fair value estimate in the interim. While there are nontrivial portfolio and go-to-market differences, it should be noted that Pepsi generates over 60% of revenue and over 70% of profits in North America.”

Honeywell (HON) “In our view, Honeywell remains one of the best-positioned, multi-industrials for long-term growth based on a confluence of three factors--culture, process, and portfolio. While culture is hard to define, we submit it’s essential to Honeywell’s continued success. Common characteristics in its workforce include an ability to demonstrate independent and curious intellectual thought, as well as results-driven entrepreneurialism.

"A rigorous process is clear at all levels of the organization. Honeywell’s operating system is modeled after the Toyota production system and employs a cross-functional framework emphasizing lean operations, customer-focused solutions, and speed of product development down to the plant level. Even though Honeywell implemented its operating system years ago, we still see an opportunity for further operating margin uplift and model a 250 basis point improvement from 2019 levels over the next four years. We point out one of Honeywell’s facilities run at its self-imposed highest level of manufacturing.

"As for its portfolio, we think Honeywell is successfully transitioning toward becoming a software-industrial company. We remain bullish on Intelligrated, which we believe will help propel the firm’s productivity solutions business toward a 9% CAGR over the next five years.

Public Service Enterprise Group (PEG) “Public Service Enterprise Group is one of the few diversified utilities left in the United States, giving investors a mix of stable, growing earnings at its regulated utility and commodity energy market exposure at its power generation business. However, its faster-growing regulated business is diluting some of that commodity exposure, reducing risk but also limiting earnings upside.

"Earnings flatlined for several years because of weakness at the power generation unit. But earnings growth is picking up as PSEG's fast-growing New Jersey regulated utility increases its share of consolidated earnings to nearly 80% this year. PSEG's plan to invest $10 billion at its regulated utility during the next four years supports our 5% annual consolidated earnings growth outlook.

"The utility must maintain political and regulatory support for infrastructure replacement, clean energy, energy efficiency, and other network upgrades to increase earnings. New Jersey's 2018 Clean Energy Bill and other infrastructure investment initiatives show that public policy should support PSEG's growth outlook. PSE&G passed a big regulatory test by reaching a settlement to raise base electric and gas rates in 2019 for the first time since 2010.

"PSEG Power's carbon emissions are lower than at most other U.S. utilities. PSEG's $2 billion investment in new gas generation, New Jersey nuclear subsidies, and potential offshore wind development support its clean energy profile. Renewable energy is a long-term threat for PSEG's gas and nuclear fleet, but that is decades off.

"Power demand and price volatility could swing PSEG Power's profits, but as long as PSEG remains an efficient operator, the generation business should continue to provide value well beyond 2030.”

Get the latest industry insights delivered straight to your inbox. Subscribe

Susan Dziubinski does not own shares in any of the securities mentioned above. Find out about Morningstar’s editorial policies.