Recent weeks' historic plunge in U.S. Treasury yields provided a welcome port in the storm for bond-fund investors feeling the sting of sharp losses in their stock portfolios.

Bond prices remain volatile, though, as policymakers respond to the coronavirus crisis daily, and markets react with either panic or relief. The numbers cited below reference performance data as of March 16, 2020, highlighting a particularly rough stretch for credit and corresponding overall surge in Treasury prices. That included days during which the 10-year Treasury yield whipped back and forth by eye-popping margins, a pattern it repeated on March 17 when Treasury yields reversed course and climbed higher as stocks rallied, underscoring the challenges of worrying about short-term market fluctuations.

Sharp shifts can be useful, however, for eyeballing risk and understanding how various funds and categories are set up to fare when markets panic. Treasury yields began 2020 by resuming the gradual decline they experienced for much of 2019 then rapidly picked up the pace once equities started selling off in earnest on Feb. 24. The 10-year note closed below 1% for the first time ever on March 5--reaching a low of 0.54% on March 9 (the 30-year bond even closed just below 1% that day)--and stayed there until March 17, when it closed just above 1.0%.

Heightened fears that a coronavirus pandemic would impact the global economy initially sent high-yield corporate bond prices lower, but investment-grade credit appeared to shrug it off at first. That changed the week of March 9, as market participants grew concerned that prices on investment-grade companies didn't adequately reflect the risks a slowing economy posed to their businesses and credit ratings. Russia's refusal to cut oil production along with other OPEC members in the face of slumping demand, followed by Saudi Arabia's decision to increase output, sent oil prices plummeting, putting further strain on the debt of BBB rated energy companies facing downgrade risk. The additional yield offered by BBB corporates over Treasuries increased by roughly a full percentage point over the week of March 9 to just under 3 percentage points.

While corporate bonds were hurt the most, they weren't the only sector to come under pressure during the week of March 9. Yields on agency mortgage-backed securities--which are backed by the U.S. government--reached postcrisis highs versus Treasury yields during the week. All told, the impact on performance was fairly muted: Agency mortgages lost a little over a percent the week of March 9 and have generated modestly positive gains since Feb. 24 and for the year to date. But as borrowers scrambled to lock in lower rates on their mortgages, the spike in refinancing activity led to increased agency MBS issuance in a market with little appetite for it, prompting the Federal Reserve to include $200 billion in agency MBS purchases in its latest round of quantitative easing announced over the weekend. Even the cash-bond Treasury market has shown signs of liquidity stress, a dynamic the Fed is seeking to address with another $500 billion in Treasury purchases.

With few other places to hide, Treasuries have been the main source of ballast in bond markets so far in 2020, the more interest-rate sensitivity the better. From Feb. 24 through March 16, the 10-year Treasury gained close to 7%, while the five-year gained around 4%. Investment-grade corporates lost 4.9%, though, as the additional yield they offered over Treasuries more than doubled during the period. These two opposing movements contributed to a comparatively modest but still welcome 0.8% gain for the Bloomberg Barclays U.S. Aggregate Bond Index, which holds roughly 25% in corporates and just over 40% in Treasuries.

High-yield corporate prices, meanwhile, have dropped dramatically in recent weeks, with broad market indexes losing nearly half as much as the S&P 500's 28% decline since Feb. 24. The debt of junk-rated energy companies has struggled the most, as plunging oil prices and a slowing economy threaten those companies' ability to make their debt payments. Bonds issued by the most leveraged companies have also gotten hit hard, as losses on CCC debt (including energy) reached the high teens. In a matter of weeks, the yield spread of high-yield bonds over Treasuries shot up from historically low levels of close to 3.5 percentage points to more than 8.0 percentage points as of March 16, which was just shy of highs during the worst of the 2015 to early 2016 commodity sell-off.

Treasuries Good, Credit Bad (for Now) As a result, even a little bit of corporate credit exposure has been enough to weigh down the returns of a diversified bond portfolio. The intermediate core bond Morningstar Category--which includes funds that limit their below-investment-grade exposure to 5% of assets or less--gained a slim 0.3%, on average, from Feb. 24 through March 16. That group generally held up better than the intermediate core-plus bond category (down 2.2%), where funds have more flexibility to invest in high-yield corporates and other risky sectors such as emerging-markets debt. Other categories where funds can invest significantly more of their portfolios in high-yield debt, such as multisector and nontraditional bond, have experienced steeper losses. 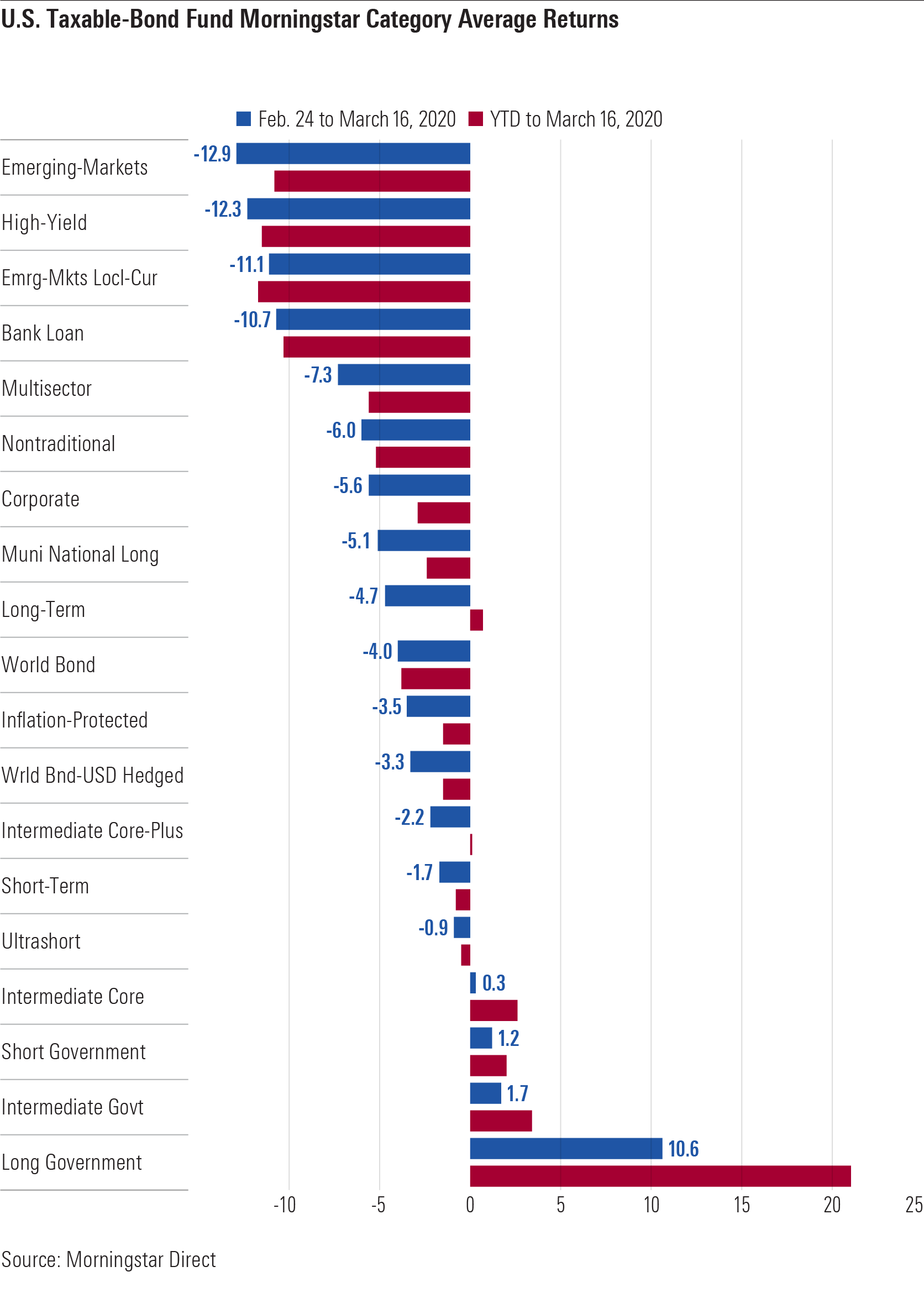 U.S. Aggregate Index-tracking funds in the core bond category--including iShares Core U.S. Aggregate Bond ETF (AGG), Schwab U.S. Aggregate Bond ETF (SCHZ), and Vanguard Total Bond Market ETF (BND)--are once more proving their worth in a time of crisis. Given their strict focus on investment-grade debt and large allocations to Treasuries, these funds have produced modest gains of less than a percent since Feb. 24 and are up more than 3% for the year to date through March 16. Other actively managed core bond funds that have held up well amid the volatility include American Funds Bond Fund of America (RBFGX) (up 0.8% since Feb. 24), which benefited from the team's decision to underweight corporate credit. Losses in this cautious peer group were well contained overall: Most in the category have limited losses to less than a percentage point, while even the worst performers in the category were down 2% to 3% since Feb. 24, and down roughly 1% for the year to date through March 16.

Other highly rated actively managed funds that have struggled during this period include those that tend to overweight corporate credit in most environments. The team that runs Dodge & Cox Income (DODIX) (down 3.8% since Feb. 24) had trimmed the portfolio's corporate holdings after valuations ran up in 2019 and increased its Treasury stake. As of Dec. 31, 2019, though, the portfolio still held a 34% corporate stake, including 5% in BB rated high-yield. Western Asset Core Plus Bond (WACPX) (down 5.0%) also came into 2020 with a relatively moderate corporate stake compared with its history (24% in investment-grade and a roughly 5% stake in bank loans and 1% in high yield). That firm has favored the debt of energy companies in its investment-grade corporate holdings, arguing that these companies have substantially improved their balance sheets and cost structures since 2016, though this has likely caused pain in the short run (the fund's reported exposure to select emerging-markets currencies that have depreciated versus the U.S. dollar may have also weighed on returns).

Be Patient It's difficult to draw concrete conclusions from bond-fund performance over such a short period of time. In a choppy market like this one, active managers may appear to stumble or recover depending on the day. Despite some weakness in investment-grade credit markets, high-quality core bond funds have generally protected investors during a painful stretch for equities. While some core-plus bond funds have struggled along with equities (though to a lesser degree), that's no reason to give up on them. Skilled managers with the resources and discipline to take advantage of the bargains that inevitably crop up during periods of panic could be laying the groundwork for strong performance in the future.

Miriam Sjoblom does not own shares in any of the securities mentioned above. Find out about Morningstar’s editorial policies.