Saving for your child’s college education can seem daunting. How much should you save each year, and where should that money go?

529 college savings plans are one of the most popular educational savings vehicles. They are tax-advantaged savings plans meant to encourage saving for higher education. Investors input aftertax dollars, investments grow tax-free, and earnings are tax-free when used toward qualified educational expenses. There are many different 529 plans, each with their own costs and benefits. Morningstar's Karen Wallace elaborates on some of the best 529 plans.

Some states offer prepaid 529 plans. Unlike conventional 529 plans, prepaid plans allow you to lock in a tuition rate at in-state public universities. According to the SEC, plan purchasers buy “units or credits at participating universities for future tuition and mandatory fees at current prices.” Then, the program invests these funds to exceed the pace of rising tuition and cover future tuition costs. Prepaid 529 plans give the assurance that your investment will keep up with the rate of college tuition inflation, mitigating the market risk associated with most conventional 529 plans. Furthermore, these plans also have similar tax benefits to conventional 529 plans, according to the SEC. 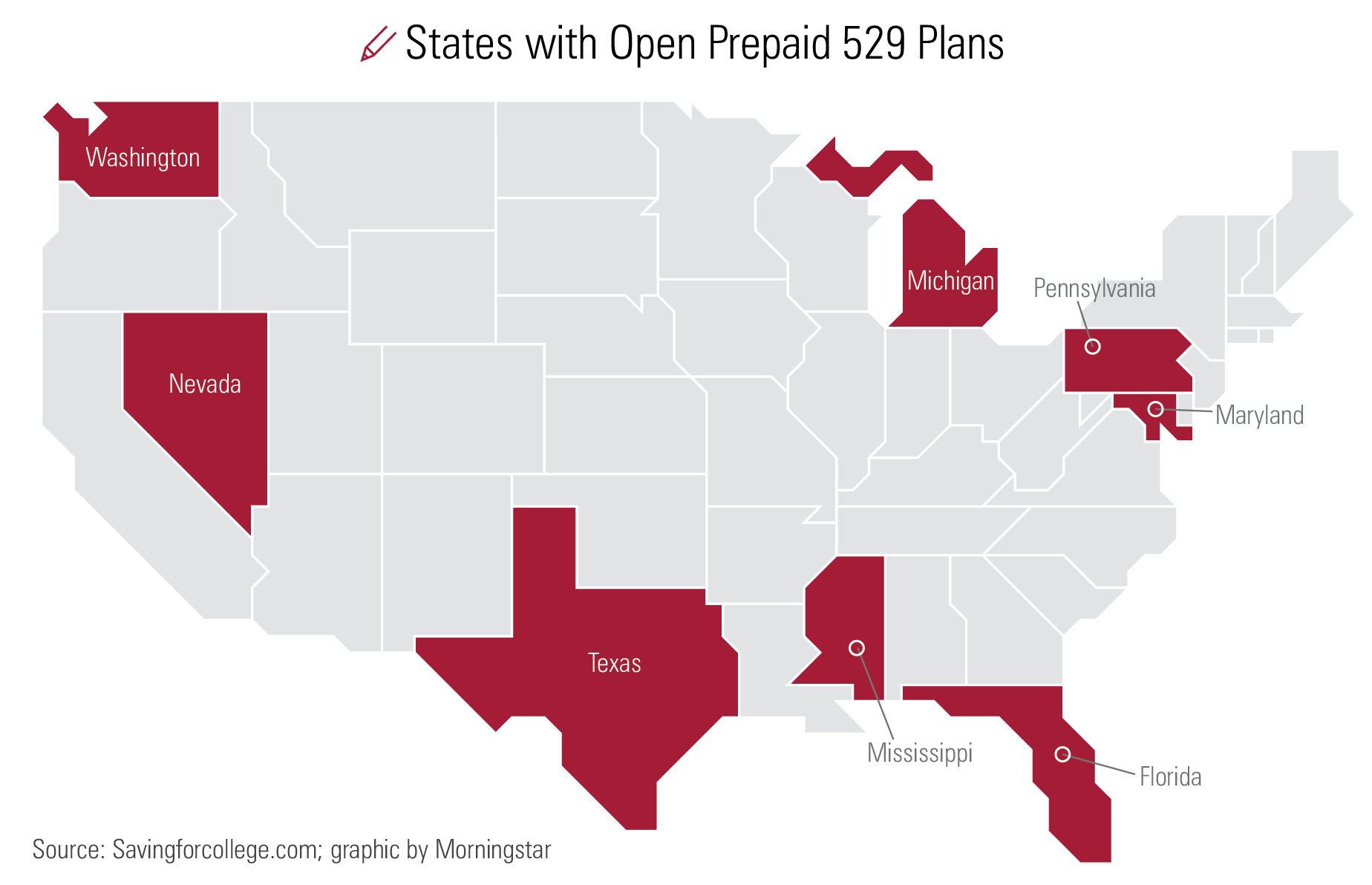 A prepaid plan can be an even safer investment if it is backed by the full faith and credit of its state. This guarantee requires the state to cover any funding gaps that may occur, according to Finra. A prepaid 529 plan can be an advantageous and attractive option if your child is likely to attend a participating university.

While prepaid 529 plans can be advantageous to some, stipulations and plan limitations have contributed to a decrease in their popularity. For example, prepaid plans have age limitations and set enrollment periods during the year. Because state prepaid plans can only be fully redeemed at state public universities, the program will typically only cover the weighted average of in-state tuition if a student attends a private or out-of-state institution, according to FinAid. Other stipulations, such as residency requirements, holdings periods to use the benefits, and limitations on coverage of educational expenses, have also led to the diminished popularity of these plans. Unlike conventional 529 plans, which can be used on most educational expenses, most prepaid 529 plans only cover tuition and mandatory fees. Other costs, like room and board, are typically not covered by this type of plan. 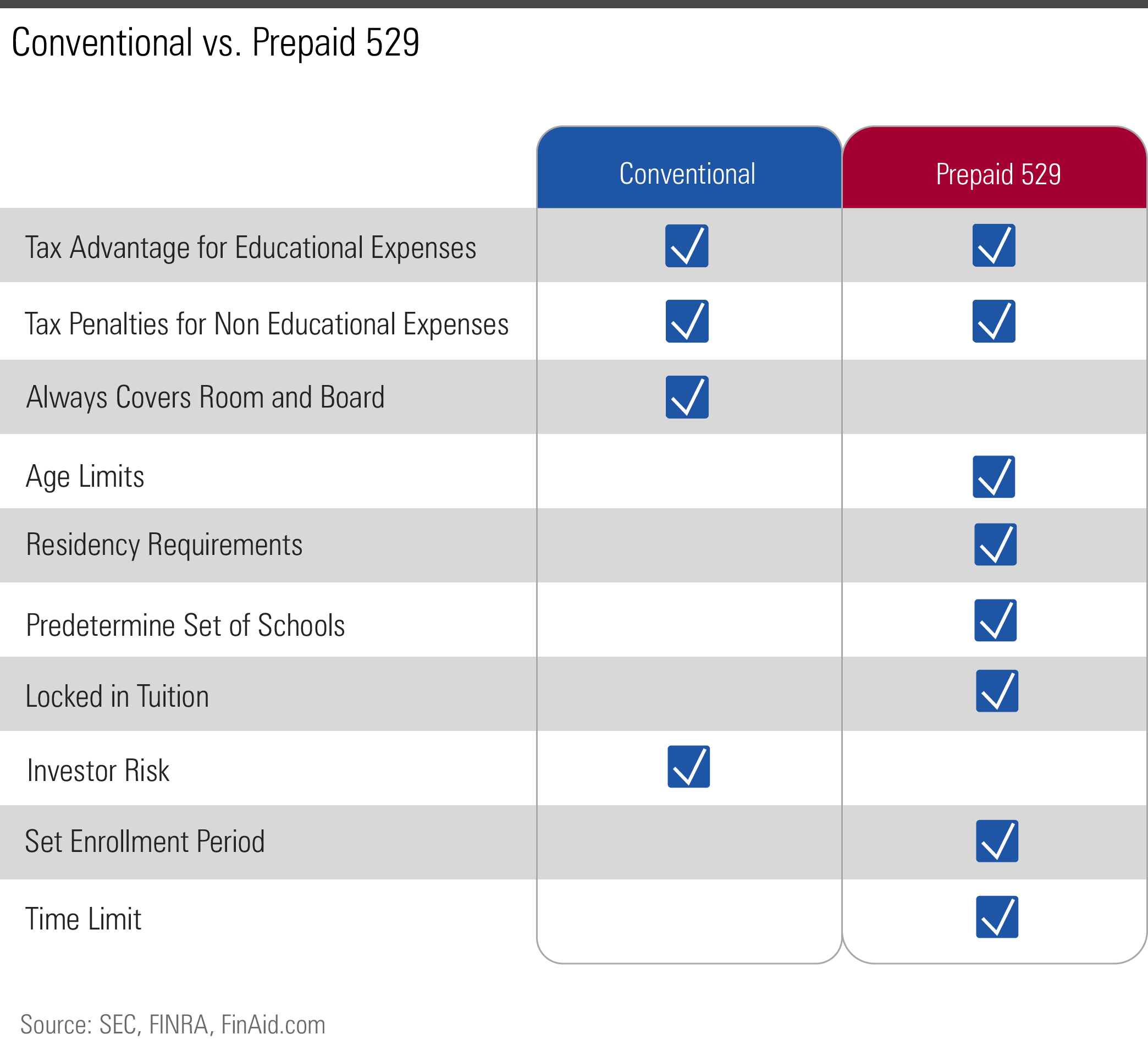 As Wallace details, design flaws like those mentioned above have caused the number of prepaid plans to drop significantly. Recently, according to their respective websites, both the Virginia plan and the Illinois plan suspended enrollment because of lack of funding and legislative impediments. At the present, there are only nine prepaid 529 plans still open for enrollment, one private plan and eight state-sponsored plans. These state-sponsored plans encompass those offered by Florida, Maryland, Michigan, Mississippi, Nevada, Pennsylvania, Texas, and Washington.

How to Evaluate There are several key factors to look at when analyzing the prospects of a prepaid 529 plan. Here are some to take a look at.

Funded Ratio--The funded ratio is the total market value of a plan’s assets divided by the discounted value of the expected future liabilities (the total liabilities). A plan needs to be 100% funded in order to fully pay out benefits. In order to protect against unexpected adverse outcomes, plans will typically want to have a funded ratio greater than 100%.

Transferability--The ability to transfer the plan to another beneficiary if the student doesn’t attend college or if there are other circumstances. Most plans allow for a change in beneficiary to a closely related family member.

Refund Options--What ability does the plan have to transfer assets to a different type of savings plan, or what are the potential tax implications? How much will you be able to recoup if you request a refund? Most plans offer at least a refund of the original contributions minus any fees and benefits paid out or plus a percentage of net earnings/losses. Plans offer more generous refunds if your student receives a scholarship or if the plan is canceled because of entrance into the military.

Coverage--Most plans cover the cost of tuition and mandatory fees but don’t always cover other costs such as room and board, textbooks, and other educational expenses. Some plans may cover a greater array of educational coverage such as vocational school or graduate school. Knowing what aspect of school expenses will be covered will help you determine how much else would need to be set aside outside of the prepaid 529 plan.

Costs--This encompasses the fees and expenses associated with opening an account. Knowing the enrollment fees, maintenance fees, and cost of credits/units will help you budget out how much to save.

Tax Benefits--Are your contributions exempt from state or federal taxes? What amount of contributions are exempt from the gift tax? Prepaid 529 plans offer similar tax benefits as conventional 529 plans. Most prepaid plans offer some combination of deductions from state income taxes, exemptions on earnings from federal and state taxes, and exemptions from federal gift taxes.

Time Constraints--The typical number of years to use tuition benefits is 10. In recent years, however, funding concerns have led some plans to decrease this number. 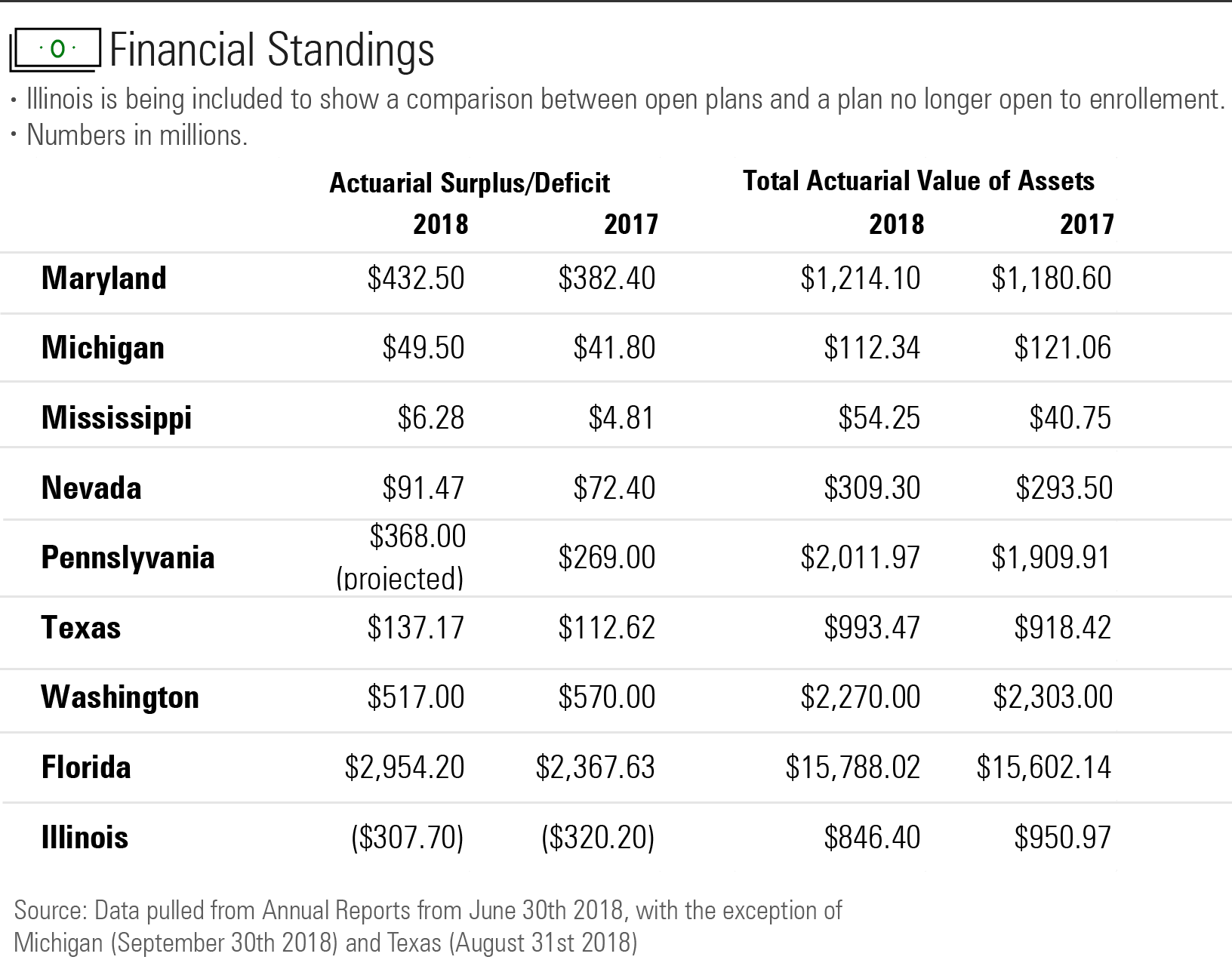 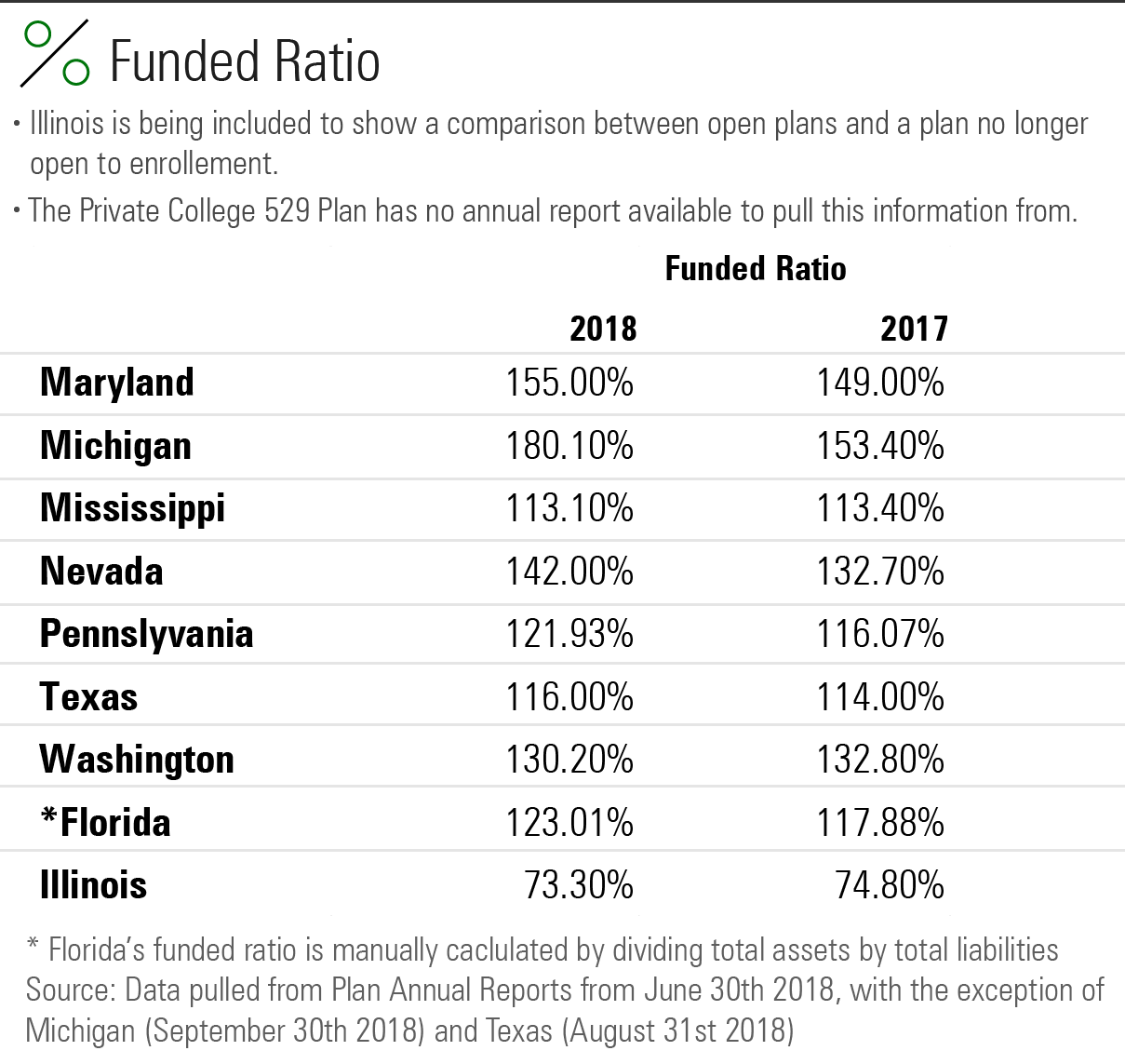 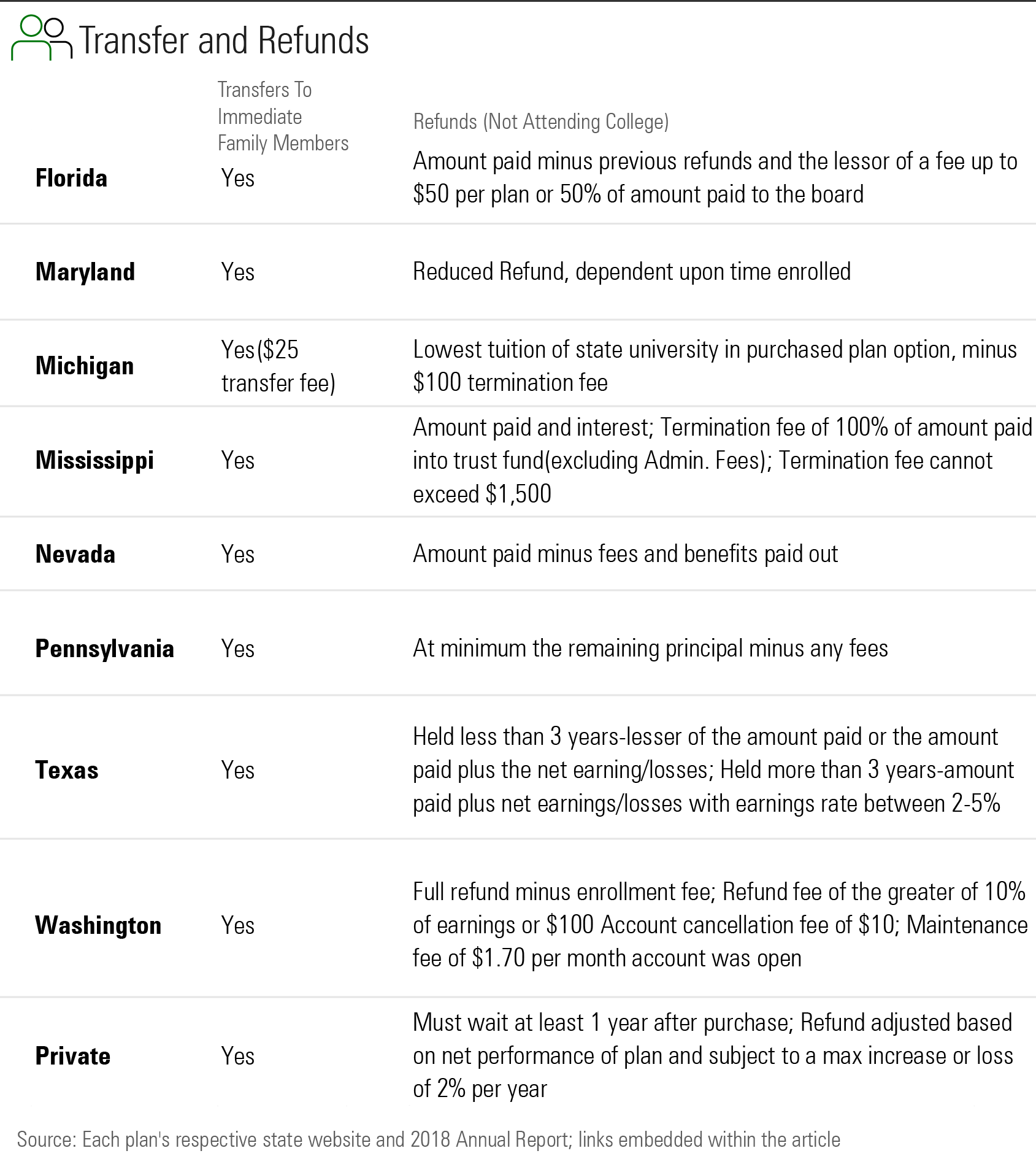 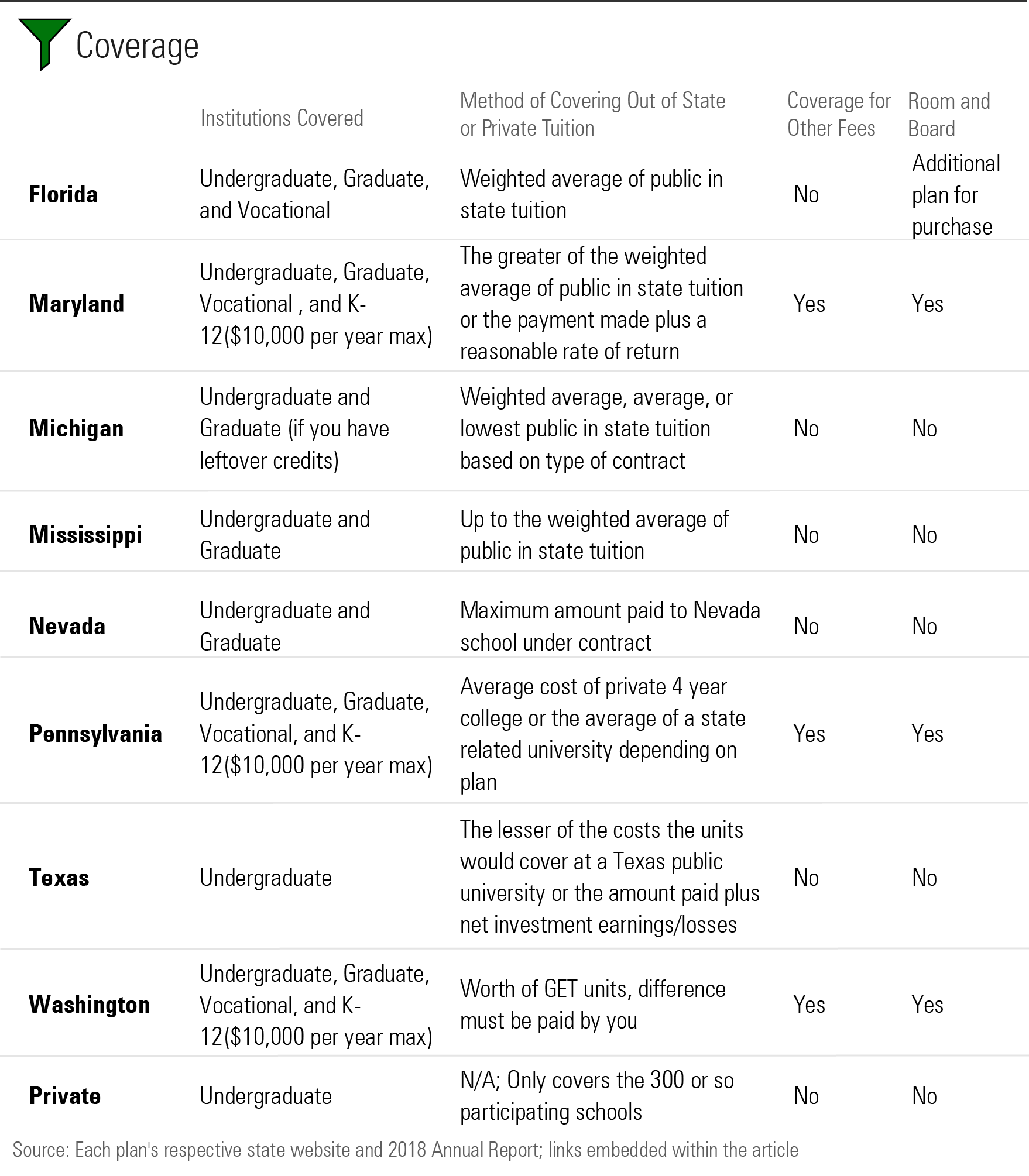 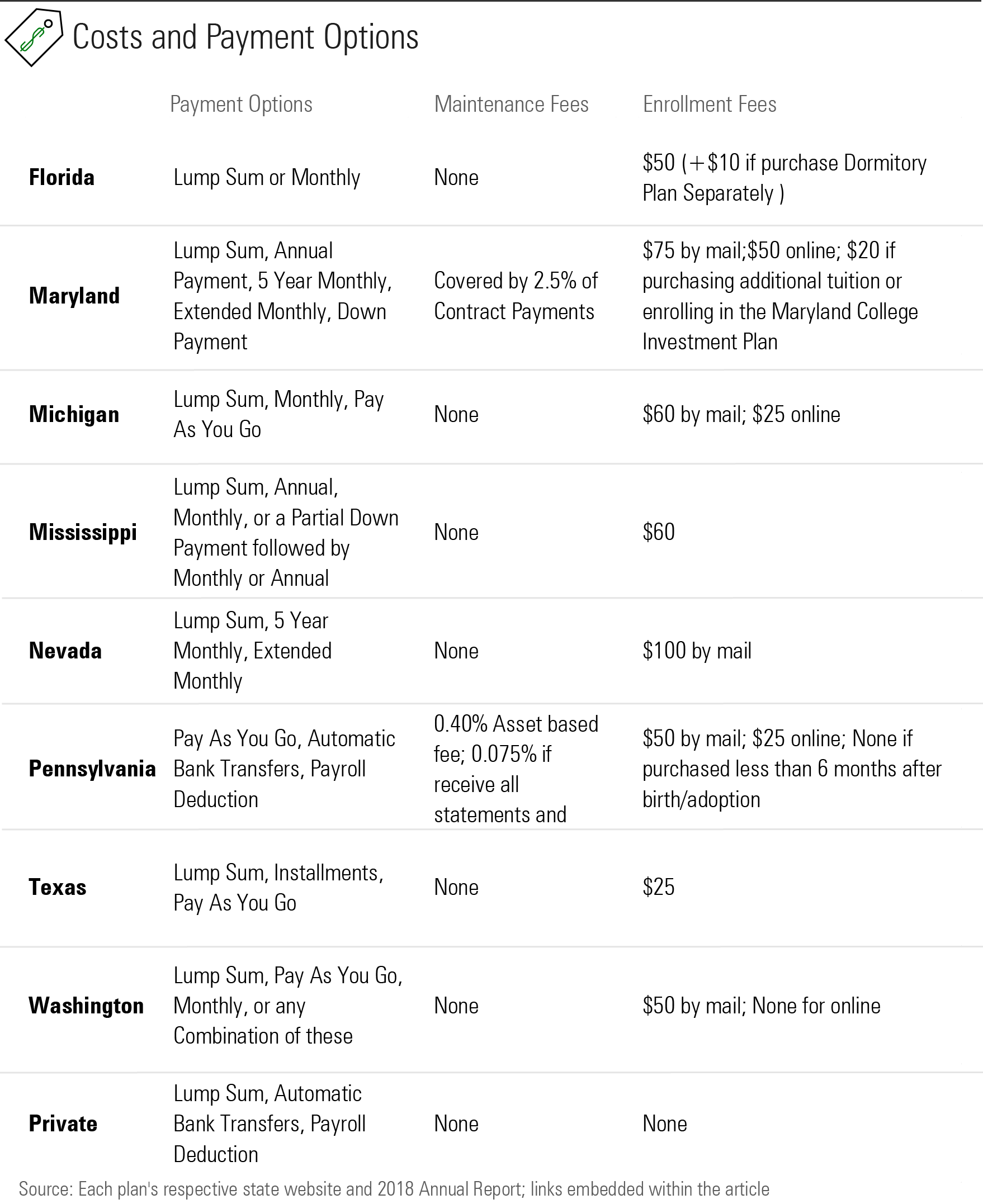 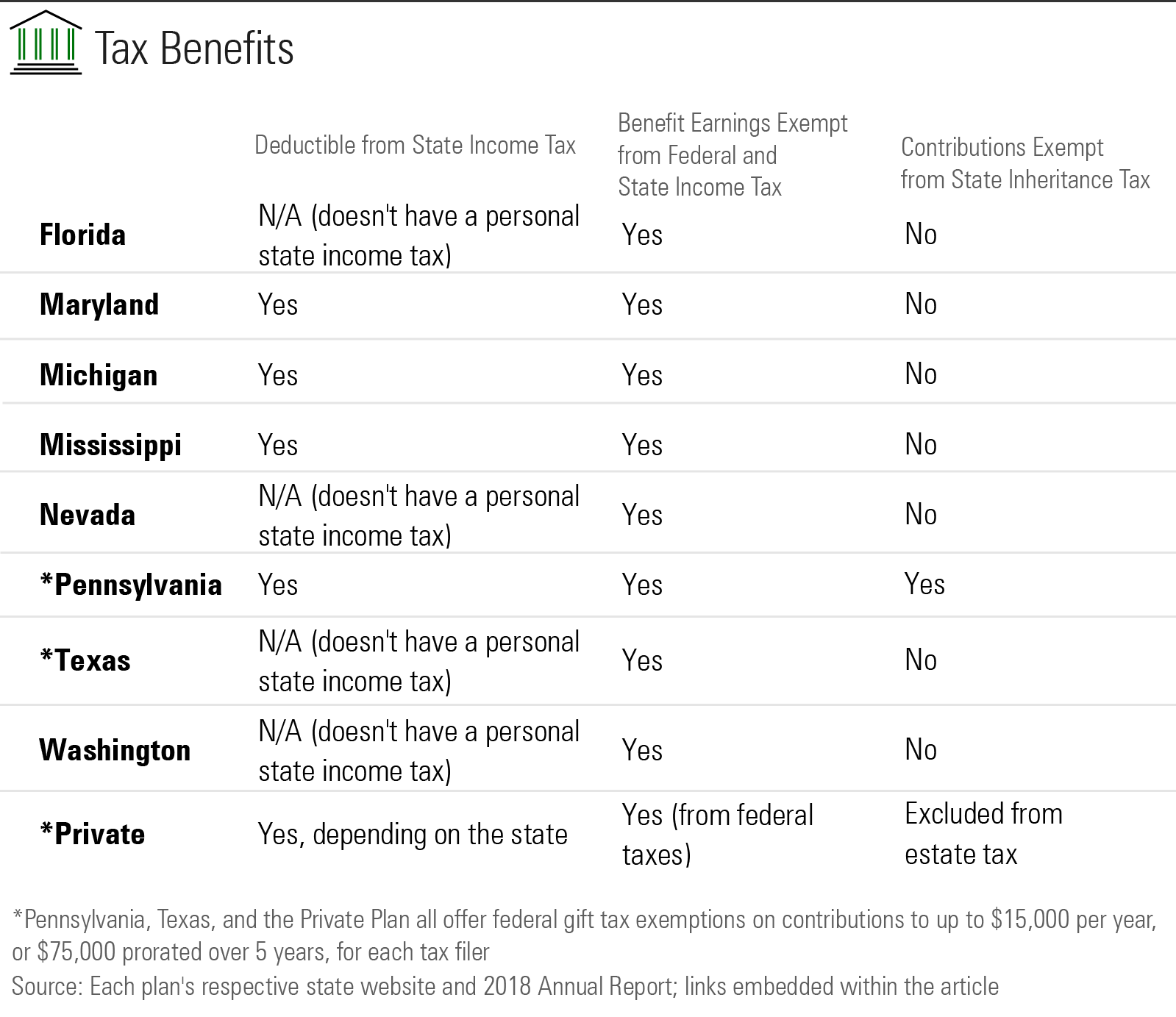 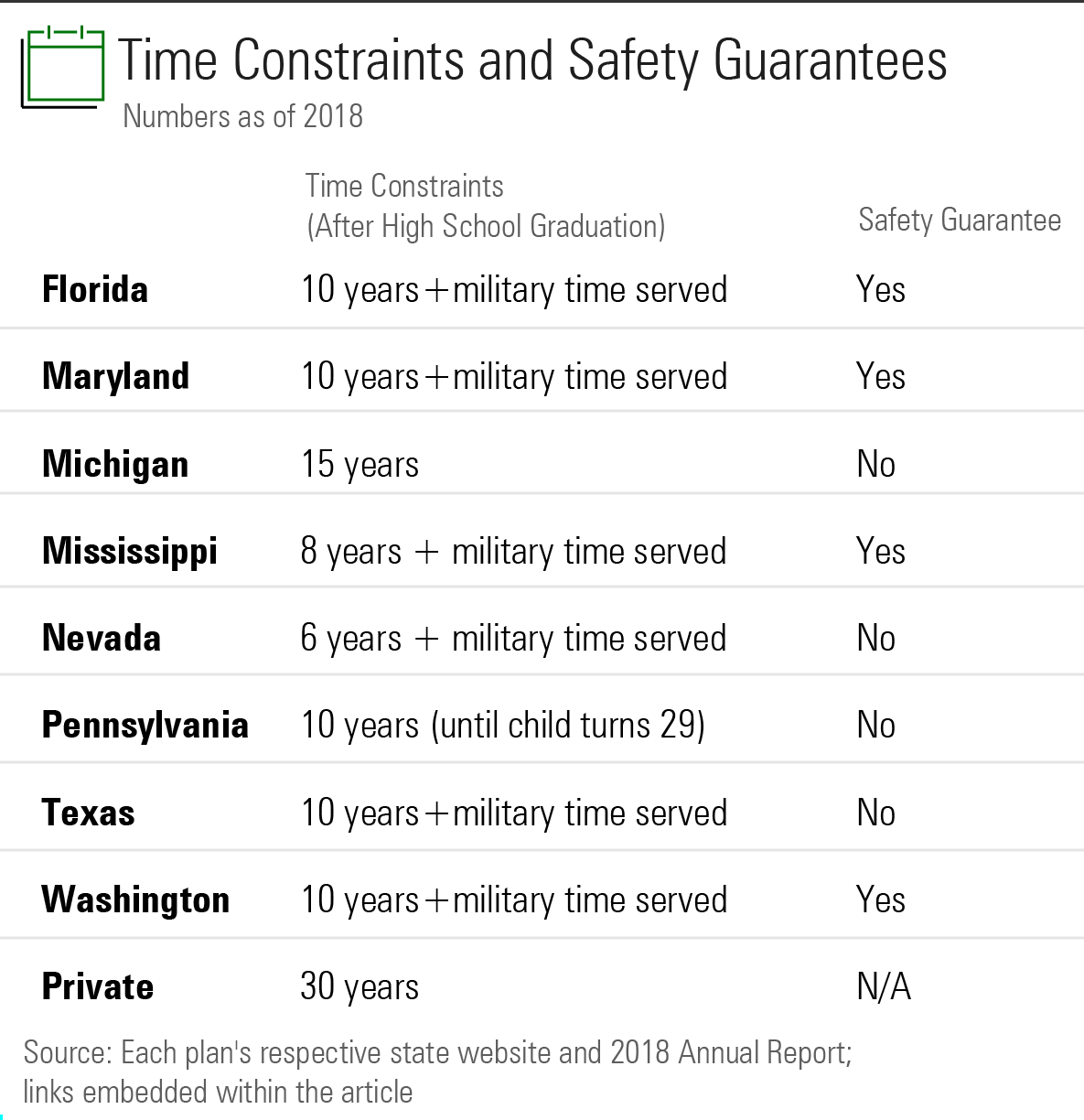 Open Prepaid Plans Florida: Florida Prepaid College Plan Based upon information from the U.S. Census Bureau, Florida’s 2018 annual report, and the annual reports of other plans, Florida’s plan is the most popular state-sponsored prepaid 529 plan, as its assets under management relative to the population of the state is greater than that of any other states’. It is well funded, gets a steady stream of new contracts purchased each year, offers less risk than other prepaid plans, and has been able to keep up with the rising price of tuition. In the 2017-18 enrollment period, 36,062 total plans were purchased, leading to a total current enrollment of 1,147,486 children and students. Florida 2018 Annual Report

Mississippi: Mississippi Prepaid Affordable College Savings Program Mississippi’s prepaid plan has gone through some changes in recent years as it was temporarily closed to new enrollment because of lack of funding from 2012 until 2014. Contracts purchased since 2014 have a shorter usage time than those purchased prior to the temporary enrollment closure. The plan is backed by the state of Mississippi, adding some reassurance to those skeptical of the safety of the plan. Mississippi 2018 Actuarial Valuation Report

Nevada: Nevada Prepaid Tuition Program The Nevada Prepaid Tuition Program has been on track with meeting its funding goals in the past several years, making itself more capable of paying out promised benefits. The plan is not backed by the state of Nevada, making it somewhat riskier to the end investor than plans that do have a state guarantee. However, the program does offer some more flexibility than other plans as it also covers graduate programs. Nevada 2018 Annual Report

Pennsylvania: PA 529 Guaranteed Savings Plan Based on its 2018 funded ratio, Pennsylvania’s plan is not as well funded as other state’s programs, but its coverage is somewhat wider. Its funds can cover room and board, textbooks, and other fees. It can also be used on K-12, vocational school, and graduate school tuition. The plan’s returns have aligned with those of other successful state plans, seeing a 7.76% net-of-fees return for the 2018 fiscal year with a five-year annualized return of 7.92%. Pennsylvania 2018 Annual Report

Washington: Guaranteed Education Tuition Program Washington’s Guaranteed Education Tuition plan offers more flexibility than some other state plans. Apart from tuition and mandatory fees, GET also covers other educational expenses such as room and board and textbooks. GET is relatively well funded and in 2018 experienced higher than expected returns and distributions. Washington 2018 Actuarial Valuation Report

Private Prepaid Plan Private College 529 Plan The Private College 529 plan allows families to lock in tuition at nearly 300 participating private universities and colleges. It is the only prepaid 529 that can lock in tuition at private universities. The plan is sponsored by the Tuition Plan Consortium LLC, which is composed of participating schools. The Tuition Plan Consortium guarantees the locked-in tuition price, meaning a participating school is obligated to accept purchased plan certificates even if that school later leaves the program. Beneficiaries have up to 30 years to use the plan’s benefits.