It’s no surprise that dividend-screened exchange-traded funds are the most popular flavor of strategic beta globally. The confluence of low interest rates and an aging demographic hungry for retirement income has swelled the asset bases of equity-income strategies since the financial crisis, even as the performance tables have been led by growth stocks.

The appeal of dividends goes back to the days of the Dutch East India Company and extends beyond the cash payout. Reinvested dividends and dividend growth contribute a substantial portion of the long-term total return of equities. Though they may be overshadowed in the short term by the market’s highfliers, dividend-paying stocks have a strong long-term track record, as the dividend commitment instills discipline on corporate managers.

Yet equity income investing is far from risk-free. A company can lure investors in with yield, only to experience financial distress, dividend cuts, and share price declines. From financial services and housing-related stocks in 2008-09 to energy and materials in 2015-16 to  General Electric (GE) in 2017, the past decade is littered with cautionary tales of dividend traps. Overvaluation is another pitfall. Yield-hungry investors can bid up the shares of dividend payers, as seen in 2016, when the median utilities stock covered by Morningstar’s equity analysts traded at a 16% premium to estimated fair value.

For this reason, a selective approach to equity income investing is optimal. Most rules-based passive equity-income strategies employ screens for dividend sustainability. These tend to be backward-looking indicators, such as historical dividend payments and historical dividend growth. This approach is inherently limited. For example,  Bank of America (BAC) steadily grew its dividend for decades until a substantial cut in 2008-09. Similarly,  Citigroup (C),  ConocoPhillips (COP), and  Freeport-McMoRan (FCX) were all reliable payers—until they weren’t.

A Better Gauge Morningstar Indexes employs a forward-looking approach to screen dividend-paying companies. By targeting companies with competitive advantages and healthy balance sheets, the methodology emphasizes dividend payments that can be sustained and ultimately grown over time. The assessment of competitive advantage relies on the insights of Morningstar’s equity analyst team, whose proprietary Morningstar Economic Moat Rating measures the sustainability of the profits that fund dividends. The methodology also incorporates Distance to Default, a measure of financial health that aims to forecast the likelihood of bankruptcy.

We recently updated and globalized our originalstudy of the efficacy of these screens, which underlie the Morningstar Dividend Yield Focus Index family. Taking as a starting point the Morningstar Global Markets Index, which contains more than 7,000 stocks from developed and emerging markets, we looked at dividend payments between mid-2005 and mid-2017. We bucketed companies by moat, quantitative moat (calculated by a machine-learning algorithm designed to predict the economic moat rating a Morningstar analyst would assign), and Distance to Default level at the start of the period, then looked at whether they went on to experience dividend cuts.

In absolute terms, the frequency of dividend cuts increases outside of North America. It grows larger still when emerging markets are included. Outside of North America, dividends are not considered a commitment to the same degree as they are in the U.S. and Canada. They are often paid out opportunistically when the company has excess cash on hand. In emerging markets, the dividend commitment is weaker still. That said, the trend was the same across the globe: During the 12-year time period examined, the moat ratings and Distance to Default scores were good predictors of the likelihood of a dividend cut. 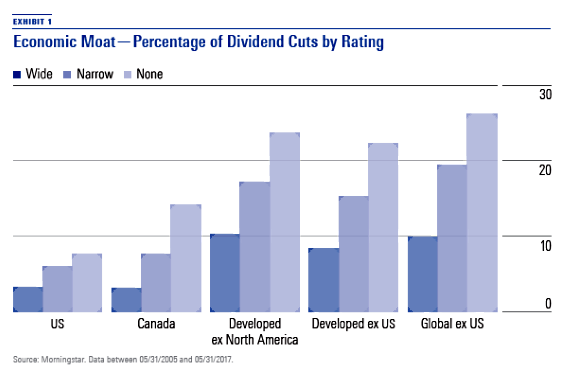 Likewise, a company’s Distance to Default score was closely tied to whether that company went on to cut dividend payments. As shown in Exhibit 2 , we divided the stock universe into four equal bands (quartiles); companies with High scores were those least likely to default. We found that companies with Very Low Distance to Default scores had the highest percentage of dividend cuts across the geographies examined. Those with High scores were much less likely to cut dividends. 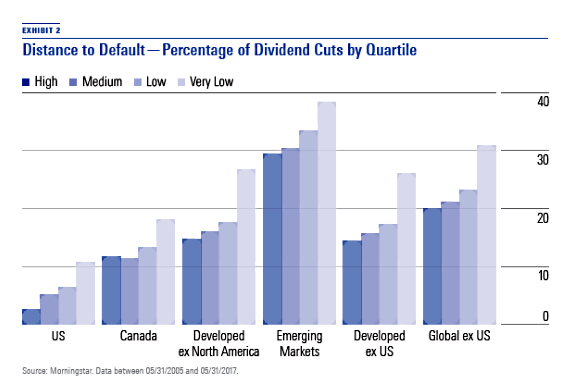 The Specter of Rising Rates But is now the wrong time to invest in dividend-paying stocks? The conventional wisdom holds that when rates rise, investors turn to cash and bonds and shun equity income. But the empirical record shows that the relationship between interest rates and the performance of dividend-paying stocks is complicated. Morningstar Indexes compared the relative return profile of dividend payers to the 10-year government bond yield in several global markets and found no clear pattern. For example, in the U.S. market, dividend payers outperformed in the mid-1970s despite rising rates— and languished in the late 1990s even after a Fed rate cut.

A similar conclusion was reached by Morningstar equity analysts Travis Miller, Andy Bischof, and Charles Fishman in a recent report:

“Our analysis of utilities’ stock returns since 1992 debunks the myth that rising interest rates will sink utilities—nor will another drop in interest rates necessarily pay off. In fact, the probability of utilities and interest rates moving in opposite directions over two- and three-year periods was similar to a coin flip during the last 25 years.”

It’s safe to say that investors should spend less time worrying about interest rates and more time thinking about financial health and the sustainability of the profits that fund a company’s dividends. Investors should never chase yield at the expense of total return, but buying the shares of companies that are capable of maintaining and growing their income streams into the future is a path to successful long-term equity investing.

Dan Lefkovitz does not own (actual or beneficial) shares in any of the securities mentioned above. Find out about Morningstar’s editorial policies.