Earlier this week, we released our annual ratings for 62 529 plans, which in aggregate represent more than 95% of the industry's assets. Morningstar identified 34 plans that it believes to be best-in-class options, assigning these programs Morningstar Analyst Ratings of Gold, Silver, and Bronze. Twenty-six plans earned Neutral ratings, and two received Negative ratings. Some Neutral-rated programs may hold appeal for in-state residents because of meaningful added benefits, such as local tax breaks, so investors should research their states' particular benefits.

In terms of ratings changes, Morningstar upgraded six plans and downgraded three this year. The article published earlier this week focused on the upgrades; this article details the downgrades. In-depth analyses of all 62 plans under coverage are located in the 529 Plan Center on Morningstar.com.

So, what spurs a downgrade? Oftentimes it is a result of plans not keeping pace with the increasingly competitive landscape. In general, the industry continues to move toward best practices via fee cuts, beefed up asset-allocation resources and processes, and improved investment lineups.

Asset-Allocation Approaches Have Improved One major trend under way is an increased emphasis on smoothing the transition from stocks to bonds within the age-based portfolios. Age-based options reduce equity exposure over time via one of two methods. A progressive approach gradually trims stocks in favor of bonds, making for a smooth transition over time. Meanwhile, a static approach makes relatively large asset-allocation shifts on individual days, which can introduce meaningful market-timing risk. We favor the smoother method employed by progressive age-based options or a static approach that uses moderate steps, as defined by 10 percentage points or less.

Plans have made efforts to smooth the shift from stocks to bonds by either implementing a progressive approach or reducing the size of the equity step-downs. For instance, in November 2017, Ohio's advisor-sold BlackRock CollegeAdvantage 529 Plan will transition from a static to a progressive approach. Meanwhile, most plans that use Vanguard as the investment manager reduced the size of the equity step-downs from 25 to 12.5 percentage points, and program manager Union Bank and Trust went from 20- to 10-percentage-point steps in its age-based tracks. The trend to decrease the step size within static age-based options is depicted in Exhibit 1. 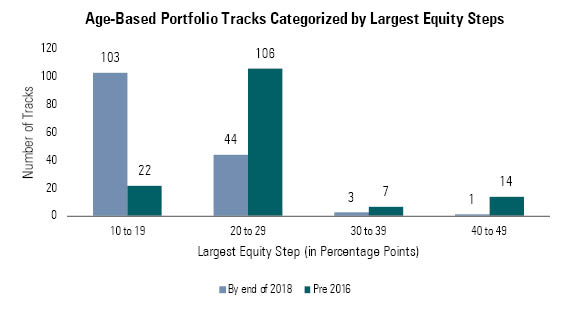 Prior to 2016, about 25% of all age-based tracks used either a progressive approach or had step sizes of 19 percentage points or less. By the end of 2018, that number will have increased to 75%, marking a meaningful shift in the industry. As a result, plans that haven't considering smoothing the glide path followed by the age-based options are increasingly becoming outliers.

Fees Still Falling Plans have also shown improvement by cutting fees year over year. The asset-weighted fee for the industry fell from 0.79% at the end of 2014 to 0.70% as of year-end 2016. Since age-based portfolios carry the majority of 529 plan assets, we emphasize these options' fees when setting Price Pillar ratings for 529 plans. We divide 529 age-based options into groups based on their distribution channel and underlying investment methods. After separating age-based options by direct- or advisor-sold plans, we categorize tracks into one of three groups: actively managed, passively managed, or a blend of the two. (A blend is defined as having between 20% and 80% in active management.) We then determine the average total expense ratio for each age-based track and compare it with similar peers. The table below shows the averages as well as the 25th and 75th percentile fees within each group as of September 2017. Very few advisor-sold age-based tracks that invest exclusively in passive underlying funds exist, so we excluded the average and quartile breakpoints for that group. 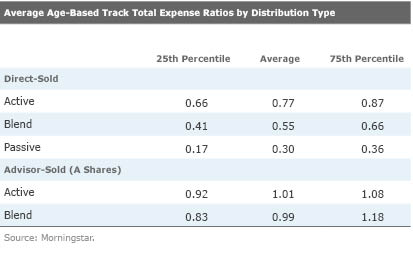 Standing Still Is Falling Behind With the landscape becoming increasingly competitive, plans that stick with the status quo often become relatively less appealing choices. That's been the case with New Jersey's advisor-sold Franklin Templeton 529 College Savings Plan, which we downgraded to Negative from Neutral this year. The plan's age-based tracks have dramatic 25-percentage-point declines in equity exposure as the beneficiary approaches college, and the team doesn't intend to smooth out that transition, citing a lack of investor demand for change. Meanwhile, fee reductions haven't kept pace with the broad industry; the plan's Growth age-based track, which is the most popular age-based option, charges an average fee of 1.19%. Generally speaking, subpar oversight at the state and program manager level decreases our confidence in the plan's long-term prospects.

Meanwhile, we downgraded Colorado's CollegeInvest Direct Portfolio College Savings Plan to Neutral from Bronze as it no longer has compelling fees. The plan invests in passively managed strategies from Vanguard, making fees an important point of differentiation. The age-based options charge an average fee of 0.36%, which is more than double the price of similar peers that invest in passive strategies. That said, the plan remains a solid choice for Colorado residents, who can deduct every dollar in contributions to the plan from their state taxable income.

Lastly, we downgraded New York's direct-sold 529 College Savings Program to Bronze from Silver, as politics have influenced the plan's investment process. A state law limits the amount of assets that can be invested in securities such as international equities, high-yield bonds, and emerging-markets debt. Vanguard recommended increasing the exposure to international equities and international bonds within the age-based portfolios, but the plan could not because of the state limitation. New York's governor has vetoed attempts to amend the law. Aside from this shortcoming, the plan remains a good option, with very low fees and solid underlying investments from Vanguard.

Leo Acheson does not own (actual or beneficial) shares in any of the securities mentioned above. Find out about Morningstar’s editorial policies.