This article previously appeared in July 2021.

Yesterday, Morningstar’s Jasmin Sethi published a comprehensive paper called “Should We Have More Annuities?” She responds yes, but with an asterisk. Jasmin has little use for complex products, such as fixed index and variable annuities. Rather, she favors the most basic varieties: 1) single premium immediate annuities, or SPIAs, which begin their payments shortly after they are purchased; and 2) deferred versions of SPIAs. (With the latter, the investor buys the annuity today, but the benefits arrive later.)

As Jasmin points out, annuities face both legal and practical challenges. Their sales are governed by a hodgepodge of regulations, primarily from state laws and the SEC, but with additional rules from the Department of Labor if the annuities are used within IRAs or 401(k) accounts. Adding to the confusion is the industry’s lack of standardization. Annuity features vary by provider, as do how those features are described and reported. There are no nutrition labels for annuities.

Because Jasmin thoroughly covers those problems, I will skip the barriers that annuities face and discuss instead how they might fit into a retiree’s portfolio. (Those seeking the abridged version of Jasmin’s paper should read Aron Szapiro’s article, “Why the Government Should Learn Which Annuities Are Useful.”)

Let’s evaluate the simplest version of the simplest offering: an SPIA that will promptly yield a fixed monthly benefit guaranteed for the buyer’s lifetime. Unlike Social Security disbursements, this contract does not adjust for inflation. If the SPIA’s first monthly check is $382, then so are all future checks. (Although some SPIAs do offer cost-of-living increases, most make nominal payments.)

Our test case is that of a freshly minted retiree, born 65 years ago, who holds $100,000 in a balanced fund. The fund suited her nicely while she was employed, but it carries two drawbacks for her current situation. First, it yields only 1.4%, and she seeks higher income. Second, its price fluctuates. Because our retiree no longer earns a salary, and thus cannot work her way out of investment trouble, she seeks greater investment safety.

She is therefore considering two possible acquisitions: 1) a 30-year bond, and 2) an SPIA. If she chooses the bond, she will buy it directly, spend the income, and recoup the principal when the bond matures. With the annuity, she will hand over her money to the insurer, obtaining a stream of ongoing payments in exchange. In either case, her credit risk is negligible, as both the bond and the annuity’s insurer are rated AAA.

The analysis appears below. Top-rated corporate bonds currently yield 2.79%, thereby providing an annual income of $2,790. Annuity rates are considerably higher. As a single female, our retiree can earn 5.09%, or $5,090 per year. That amount rises to $5,270 for males--live hard, die young!--and drops to $4,750 for married couples. In all cases, the annuity yields far more income than the bond.

This exercise, of course, is unfair to bonds. As the final column of the chart indicates, there is a huge difference between owning a bond and holding an annuity contract. The former is an asset, the latter a promise. When the retiree dies, her bond continues to exist, becoming part of her legacy. In contrast, the annuity vanishes. True, she could have bought an optional death benefit that would have preserved some of her legacy, but such protection isn’t free.

However, our retiree needn’t put everything into the annuity. She could use part of her balanced fund to buy an SPIA and put the remaining monies into stocks. Then, spend the annuity proceeds and let the equity ride. Eventually, that stock position might outgrow the bond’s principal. If so, the retiree would score a double victory: higher income from the annuity/stock blend than would have been possible from the bond, and a better legacy as well.

Addressing the various possibilities of time horizon, equity weighting, and stock-market returns is beyond the scope of this column, but an example provides the essential idea. If the retiree placed 80% of her assets into the annuity, 20% into equities, and survived the next 30 years, she would not only have received $1,430 more income per year than if she had bought the bond, she also would have increased her estate, assuming that stocks gained more than 5.51% per year. 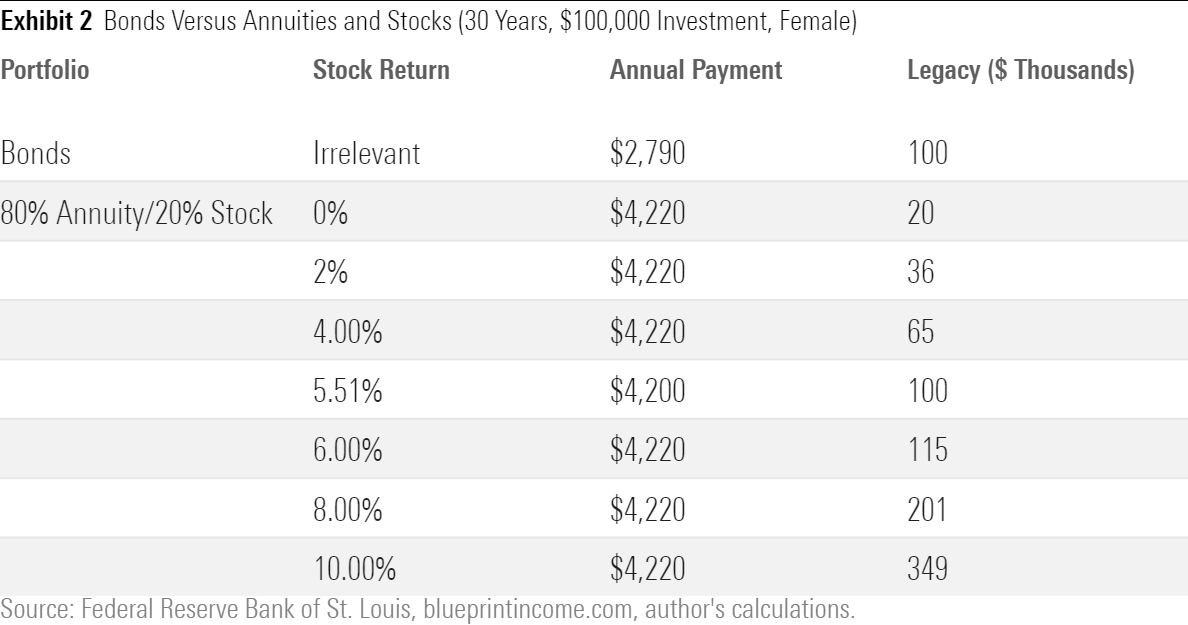 So far, substituting SPIAs for investment-grade bonds appears to be almost unambiguously sound. However, the competition tightens considerably when using bonds to generate total return rather than for income alone. That is, instead of clipping bond coupons while retaining principal, our retiree in effect creates her own annuity by dipping into capital.

Doing so would sharply increase her sustainable withdrawal rate. Over 30 years, a bond that yields 2.79% can maintain 4.82% annual withdrawals, at which point the capital is drained. Such a rate is not far behind the annuity rates for single retirees and slightly above that for married couples. What’s more, because most retirees won’t survive the full 30 years, the bond investor will probably retain some assets at the time of death.

This final table is preliminary, as it omits both the cost and market risk of gradually liquidating the bond. That is, while the annuity’s payments are fixed and guaranteed, the figures presented for the bond are uncertain. Nevertheless, the table illustrates an important point: SPIAs are not always better than bonds. Regrettably, knowing when to use SPIAs and when to avoid them often requires specific analysis. Rules of thumb may not suffice.

This article originally published July 30, 2021 with incorrect numbers in Exhibit 2.