Not a Time to Time the Market American business will do fine over time. And stocks will do well just as certainly, since their fate is tied to business performance. Periodic setbacks will occur, yes, but investors and managers are in a game that is heavily stacked in their favor. (The Dow Jones Industrials advanced from 66 to 11,497 in the 20th Century, a staggering 17,320% increase that materialized despite four costly wars, a Great Depression and many recessions. And don't forget that shareholders received substantial dividends throughout the century as well.)

Since the basic game is so favorable, Charlie and I believe it's a terrible mistake to try to dance in and out of it based upon the turn of tarot cards, the predictions of "experts," or the ebb and flow of business activity. The risks of being out of the game are huge compared to the risks of being in it.

The quote above is taken from  Berkshire Hathaway's (BRK.A) (BRK.B) most recent annual letter, and as usual Buffett's wisdom shines through.

The market seems to be testing new highs by the day. As of this writing, the S&P 500 has delivered a total return of 27.5% in 2013. With past financial bubbles still fresh in investors' minds, there is more than a little anxiety that the market has gotten ahead of itself.

To be sure, there are rare occasions when the market gives clear signals that it is either massively undervalued or overvalued. In late 1999, experienced investors recognized that stock valuations had become completely disconnected from reality--especially in the technology sector--and it made sense to raise cash. In late 2008 and early 2009, it was fairly obvious that most stocks were very cheap in any scenario other than a complete meltdown of the global economy. The median stock in Morningstar's coverage universe was trading at an incredible 45% discount to our fair value estimate at that time, and it made sense to double down on equities.

However, these are more the exceptions than the rule. The vast majority of the time--including now--the market's valuation is simply too uncertain to make drastic portfolio changes in response. Some investors believe that we are still in the early stages of economic recovery, with significant pent-up demand and underutilized capacity that will drive robust economic and earnings growth in the coming years. Other investors argue that profit margins are at unsustainable highs, P/E ratios are inflated if you use a longer-term average of earnings, and the market is only being held afloat by the Federal Reserve's exceedingly loose monetary policy.

Is the Market Overvalued? As of this writing, the median stock in Morningstar's coverage universe is trading at a modest 2% premium to our fair value estimate. This is a bottom-up measure based on our analysis of the potential of individual businesses to generate future cash flows. Despite the market's steep ascent in 2013, this metric actually hasn't moved much since the beginning of the year, when the median stock was trading right at fair value.

This illustrates a key point: Intrinsic value is a moving target. Companies' intrinsic values tend to increase over time as they collect cash flows, grow their earnings, and raise their dividends. A reasonable total return is already incorporated in our fair value estimates when we discount future cash flows. Although there will almost certainly be times in the future that the market is trading below fair value, there's no guarantee that stock prices will be lower when that happens, because fair value itself will most likely be higher. This is what Buffett means when he says that investors are in a game that is heavily stacked in their favor.

From a top-down perspective, the market also looks about fairly valued. The S&P 500 (at a level of 1,776) is trading at 17.4 times trailing-12-month operating earnings per share, which compares to a median of 17.7 times over the past 25 years. Many value investors prefer the so-called Shiller price/earnings ratio, which uses a 10-year historical average of earnings in the denominator, adjusting for inflation. By that measure, the S&P's cyclically adjusted P/E ratio is 24.8, compared with a median of around 23.1 over the past 25 years. In both cases, valuations in the past 25 years have generally been higher than they were in the prior century, although I suspect there are some very legitimate reasons for this, including low and stable inflation, improved corporate transparency and governance, and more widespread investor participation in the stock market.

Furthermore, while starting valuations influence future total return prospects, there is also a great deal of noise in the historical relationship. The chart below was produced by my colleague Sam Lee, editor of Morningstar ETFInvestor. It plots the starting cyclically-adjusted earnings yield of the S&P 500 (the inverse of the Shiller P/E) against the subsequent five-year inflation-adjusted returns of the index. There is some correlation between valuations and subsequent performance, especially at the extremes of very high or very low earnings yields. However, if you focus on the middle of this chart, it basically looks like a big blob. 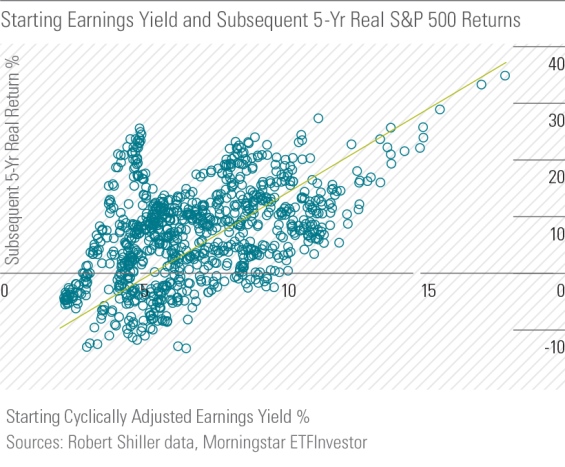 On the plus side, stocks' total return prospects over the very long run remain attractive, particularly when compared against cash or bonds. I believe 4%-5.5% total returns after inflation are a reasonable base-case expectation, based on current dividend yields and the outlook for real earnings growth. Although this might be considered disappointing by historical standards, it would still allow an investor to double his or her purchasing power in 13 to 18 years.

Conservative Stocks Are Underperforming--but Should You Take on More Risk in Search of Returns? The most salient trend since May of this year has been that conservative stocks have generally underperformed riskier, cyclical, and economically sensitive stocks. This was a reversal from the first few months of the year, when conservative stocks were leading the market's rally. Utilities, real estate investment trusts, pipeline companies, consumer defensive firms, and other high-yielding, conservative investments went from market darlings to outcasts.

There are two drivers of this shift. First, May was the month that Fed chairman Ben Bernanke originally hinted that a tapering of the Federal Reserve's bond purchase program was in sight, which caused long-term interest rates to bottom and then rebound. Second, recent U.S. economic data has been encouraging, with better-than-expected improvements in gross domestic product and unemployment. Both of these factors weigh on conservative stocks, which have less to gain from a stronger economy and are considered closer substitutes for bonds, making them more sensitive to interest-rate changes.

Investors have a natural inclination to chase recent performance. However, Buffett's dictum to "be fearful when others are greedy, and greedy when others are fearful" is as true as ever. These days I'm finding some of the most reasonable valuations in conservative stocks. Recent purchases for Morningstar StockInvestor have included consumer defensive firms  Coca-Cola (KO) and  Philip Morris International (PM), real estate owner  HCP (HCP), and utility  ITC Holdings (ITC). These firms offer attractive total return prospects with significantly less risk than other areas of the market. In contrast, we find the more economically sensitive technology, industrials, and consumer cyclical sectors to be among the most overvalued.

Please see our detailed take on each sector in the reports that follow.

Matthew Coffina has a position in the following securities mentioned above: BRK.B, ITC, KO, PM. Find out about Morningstar’s editorial policies.