That's the mantra for many investors who are sticking with actively managed funds even as the lion's share of assets flow to index-tracking mutual funds and exchange-traded funds. If they're going to pay up for active management, the thinking goes, it's better to go for those funds that don't timidly cling to their benchmarks. After all, delivering a risk/reward profile that's different from--and ideally better than--an index fund requires a fund to be quite un-benchmarklike, too.

Unfortunately, there's no single-best way to identify those funds that are employing truly active strategies. The statistic R-squared aims to identify the extent to which a fund's past performance can be explained by that of its benchmark, but it's a backward-looking measure. Even more important, funds with low R-squareds don't always impress, while those with high correlations to their benchmarks can be very strong performers. Take     Vanguard Dividend Growth (VDIGX), for example. Its 10-year R-squared of 94.96 screams "closet indexer," but the fund has managed to beat the S&P 500 by 1.2 percentage points per year during the past decade, with lower volatility to boot.

Another statistic, active share, aims to make up for some of the shortcomings of R-squared by comparing a fund's portfolio alongside that of a market benchmark. The more different a fund looks from its benchmark, the higher the active share. Meanwhile, a fund whose holdings match the index's one for one, with only small divergences, would have a low active-share figure. 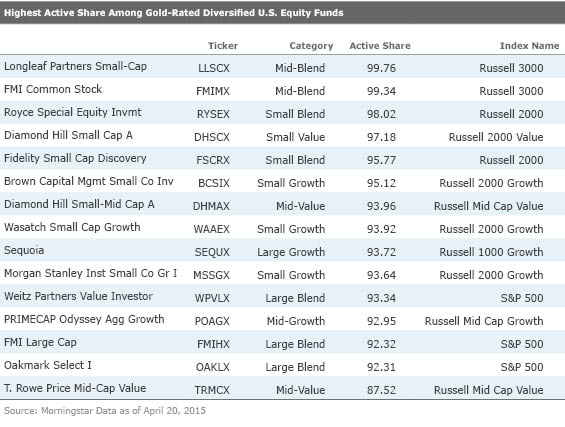 Here's a closer look at some of the most active small-, mid-, and large-cap Gold-rated funds, based on their recently available portfolios compared with their benchmarks. Note that many of the most active funds are currently closed to new investors; the first two funds listed here are still accepting new assets, but the final one is not.

Weitz Partners Value (WPVLX) Category: Large Blend | Active Share: 93.34 This fund ticks the "active" boxes in a few key ways. Perhaps the most obvious is its heavy cash stake--nearly 20% of its most recently available portfolio--an outgrowth of manager Wally Weitz and Brad Hinton's inability to find cheap stocks after taking profits on their winning holdings. But the fund's invested assets also look markedly different from the S&P 500, too. For example, the portfolio features heavy weightings in certain sectors--communications services, a longtime Weitz favorite, is a good example--and next to nothing in others, such as consumer-defensive stocks and utilities. Moreover, management ranges far and wide for companies that are trading at sizable discounts to their estimates of fair value. The net effect of that free-ranging approach is the fund's allocation to small- and mid-cap stocks--50% of its most recently available portfolio--is twice that of the S&P 500. That distinctive approach can lead to performance that is lumpy, to put it mildly: It followed up its calamitous bear-market performance with peer- and index-beating returns from 2009-12, but cash has held it back recently. Senior analyst Kevin McDevitt thinks that the fund's value ethos--combined with management's propensity to hold cash--will enable it to find opportunities in the next market sell-off.

Diamond Hill Small-Mid Cap (DHMAX) Category: Mid-Cap Value | Active Share: 93.96 While it lands in the mid-cap value Morningstar Category, this fund has always held a heavy complement of small-cap stocks, as its name suggests. And the presence of those small-cap names--not found in the mid-cap value benchmark we used to calculate its active share--is the key reason the fund looks more active than most of its peers. That small-cap emphasis has been a boon at times--for example, the fund rallied hard coming out of the bear market. But it can also drag on returns when larger fare does better, as was the case in 2013. Senior analyst Janet Yang notes that the fund's stock picks have also been a key determinant of returns; it's more concentrated in its top picks than many rival funds. For example, while top holding Willis Group Holdings (WSH) contributed to a subpar 2014 campaign, it has helped boost the fund's relative numbers this year.

Primecap Odyssey Aggressive Growth (POAGX) Category: Mid-Cap Growth | Active Share: 92.95 While the preceding two funds have posted uneven recent returns, this and the other Primecap-managed funds have been at the top of their games recently. This offering's returns have been so good, in fact, that senior analyst David Kathman notes that it was the best-performing mid-growth fund from its November 2004 inception through the end of December 2014. But as with the other offerings, investors should brace themselves for performance that runs hot and cold: It trailed its peers badly in 2007 and lagged them again in 2010. Like the Weitz and Diamond Hill funds, its portfolio demonstrates its managers' willingness to stick their necks out: It heavily emphasizes the healthcare and technology sectors while downplaying the consumer-cyclical space. Management's contrarian leanings also distinguish it from competing offerings in the mid-growth space.