Emerging-markets stocks are typically viewed as an asset class offering the potential for higher, albeit volatile, returns, and as a source of diversification. While these traits may still generally hold, this asset class has evolved significantly over its relatively short life span, so any analysis of current valuations of emerging markets should be viewed in this context.

Like any asset class, the long-term performance of emerging-markets stocks is driven by current valuations. At this time, the most common barometer of developing markets' stocks, the MSCI Emerging Markets Index, is trading at a trailing P/E ratio of 12, below its 18-year average of 16. Its discount relative to the MSCI USA Index, which is currently trading at 19 times, is also near eight-year highs. Current valuations would seem to suggest that emerging-markets equities are poised for strong absolute and relative performance over the next decade. However, a closer examination of the history of the emerging-markets asset class suggests that they may not be cheap after all.

Emerging Markets: A (Short!) History Emerging-markets stocks, as an investable asset class, are only about 25 years old. The first emerging-markets funds available to U.S. investors had their inception in the mid-1980s, and the MSCI Emerging Markets Index launched in 1988. At its inception, the MSCI Index included 10 countries, with Malaysia (33%), Brazil (19%), and Chile (9%) representing its three largest country constituents. Current heavyweights such as China, Taiwan, and South Korea were not added until 1996.

In the early years, emerging-markets stocks suffered some serious growing pains, including hyperinflation in Brazil, the Mexican peso crisis in 1995, the Asian financial crisis in 1997, and Russia's debt default in 1998. Suffice it to say, investors didn't really take to the asset class during that period, and, by the end of 2000, assets in U.S.-domiciled diversified emerging-markets funds were still low, at $16 billion (versus $385 billion at the end of 2013).

The "growth" story really took off about 10 years ago, thanks to a confluence of factors. First, the Chinese growth machine was operating at full speed. Annual gross domestic product growth rates were clocking in around 10%, thanks to economic reforms, strong export growth, and heavy investment in factories, infrastructure, and housing. Export growth was supported by low interest rates in the developed world, which drove a multiyear consumer spending boom. And thanks to China's capital investment spree, commodity prices skyrocketed, benefiting resource-rich countries such as Brazil, Russia, South Africa, and Indonesia. Emerging-markets sovereigns were also growing more fiscally stable. After the crises of the 1990s, many developing nations began to address their fiscal and balance-sheet issues, which resulted in a more stable macroeconomic environment and less currency volatility. And overall growth was strong--annual GDP growth rates in many emerging markets were trending in the high single digits.

All of these positive trends translated into exceptional equity market returns. From 2001 to 2010, the MSCI Emerging Markets Index (in U.S. dollars) returned an average of 15.8% a year, compared with the MSCI USA Index's 1.5%. Strong GDP growth and stellar equity market performance combined with improved access to the developing world's capital markets resulted in strong investment flows. By the end of 2010, assets in U.S.-domiciled emerging-markets funds had risen almost 20 times, from 10 years prior, to $300 million. Emerging-markets stocks were having their heyday. 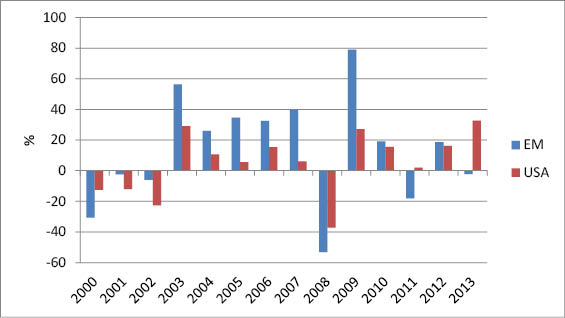 Historical Valuations While the MSCI Emerging Markets Index was generating annual returns of 20% to 50% from 2003 through 2007, valuations remained "reasonable" on both an absolute and relative basis. From 2001 to mid-2007, the MSCI Emerging Markets Index's trailing 12-month P/E ratio ranged from 11 to 16 times and was consistently lower than the P/E ratio of the MSCI USA Index. 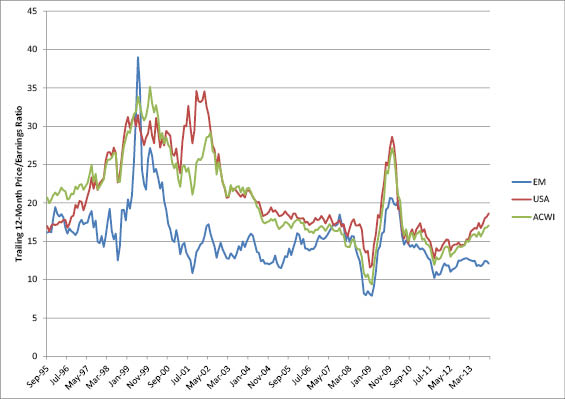 In order for the MSCI Emerging Markets Index's P/E ratio to have remained in this "reasonable" range, the Earnings denominator had to keep pace with the rapidly rising Price numerator. Earnings growth among the index's underlying constituents helped drive expansion of the "E." But a significant driver of both the numerator and denominator of the P/E multiple was the addition of many large constituents in the index. According to Ernst & Young, from 2004 to 2010, capital raised via IPOs from BRIC countries reached $372 billion, with many $1 billion-plus deals, particularly from China. Some of the largest offerings in 2006 and 2007 included Industrial & Commercial Bank of China ($22 billion), Bank of China ($11 billion), and Russia's Rosneft ($11 billion) and VTB Bank ($8 billion). At the start of 2004, giant- and large-cap firms accounted for 63% of the MSCI Emerging Markets Index, but by the end of 2007, this figure grew to 75%, thanks primarily to the addition of these mega-cap IPOs in the index. These firms were able to raise money under very favorable conditions, thanks to strong investor interest and rosy growth outlooks. Fundamentals helped drive the performance of the MSCI Emerging Markets Index in 2003 to 2005, but in 2006 and 2007, IPOs were a significant contributor to the index's performance.

Past as Prologue? Many of the tailwinds that the emerging markets enjoyed over the past decade have since faded. China is undergoing a transition from an investment-driven growth model to one that is more oriented toward consumer spending, and it is likely to face some growing pains in the near and medium term. Foreign fund flows have grown more volatile and have helped expose which countries have relatively weaker fundamentals, resulting in higher currency volatility. Almost all emerging-markets countries appear to be settling into a period of slower GDP growth in the near term and medium term. Part of this is due to the fact that during the boom years of the past decade, many countries (especially those with commodity-driven economies like Brazil, Russia, and South Africa) were able to put off much-needed reforms that would have helped these countries realize their next phase of growth. The IPO market is also less robust relative to the past decade.

From October 1995 to December 2013, the MSCI Emerging Markets Index traded at an average P/E of 16 times. There were periods of wild swings--in June 1999, the index traded at a price/earnings multiple of 39, only to fall to a multiple of 11 times earnings two years later. During the boom years of 2003-07, the index traded between 11 and 17 times earnings. Given that emerging-markets stocks have seen great booms and busts and that the MSCI Emerging Markets Index's country and constituent composition have changed significantly, comparing the benchmark's current valuation against its historical average feels a bit like comparing apples to pears. But it is fair to say that emerging-markets equities are operating under less-favorable macroeconomic and external conditions, relative to the past decade, and, as such, current P/E multiples of around 12 times seem reasonable and not particularly cheap.