The myth about mutual fund investors goes like this:

2) If investors were to hold index-only funds instead of the rotten funds that they choose, they would be far better off.

3) Thus, mutual fund investors are the dumb bunnies of the investment industry.

Through repetition, this myth has become powerful--such that fact-checking appears no longer to be required. For example, I recently read an abstract for an upcoming academic article. The abstract states that investors place "substantial amounts of assets into index funds charging high fees (over 2% per year)." I ran the numbers. The substantial amounts turn out to be 0.02% of industry index assets; 2 basis points is the percentage of the U.S. population that lives in Bayonne, N.J.

(In conducting this test, I looked at the past 10 calendar years, counting all funds that existed for the calendar year at the time of the measurement. Thus, a fund that expired in 2004 would be included for the 2001, 2002, and 2003 data, but not the 2004 data. The 10-year annualized totals for the category averages were calculated by stringing together the calendar-year results.) 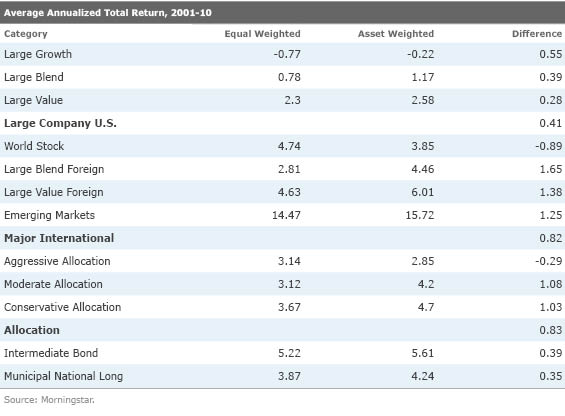 This shouldn't come as a surprise. As is well-known, most new investor money flows into 4- and 5-star funds. On the whole, these funds have below-average expenses and are issued by fund companies that are more stable, more successful, and more investor-oriented (as measured by the Morningstar Stewardship Grades for mutual funds) than is the typical fund company. These are not controversial virtues. It would be a bit puzzling if such funds did not outperform.

Because of the success of investor fund selection, the point that investors would be far better off owning index funds is greatly overstated. True, low-cost index funds do outperform the typical actively managed mutual fund over time. But as we saw, investors don't hold typical funds. They hold above-typical funds, and against that group the indexes aren't big winners. Consider the largest category of mutual funds, large-blend U.S.-stock funds. Compared with the equal-weighted large-blend average of 0.78% per annum from 2001 to 2010, the  Vanguard 500 Index (VFINX) Investor shares' gain of 1.31% is excellent. Compared with the asset-weighted large-blend average of 1.17%, it's not.

​The story is similar for the industry's other stock-fund categories. With domestic-stock funds, the relevant indexes outgained the asset-weighted fund averages in six of the eight remaining squares of the Morningstar Style Box, and the funds outperformed in the other two cases. Internationally, stock funds beat the indexes almost across the board. Results for balanced funds and sector funds were mixed. Overall, it was very much a wash with stock funds.

The case for indexing was stronger with bond funds. Most taxable-bond-fund indexes solidly outgained the asset-weighted fund averages, although the margin of victory was slight in the giant intermediate-bond category (thanks in good part to a strong decade-long showing by giant  PIMCO Total Return (PTTRX)), which houses about half the fund industry's bond-fund assets. As for municipal bonds, there are no muni-bond-fund index funds because of the difficulty of investing in a somewhat theoretical index.

Fund investors do have a problem. They select funds well, but they allocate poorly. Reworking my study so that it compares asset-weighted versus equal-weighted results over a 10-year stretch, rather than over individual calendar years, yields a very different picture. Now investors find themselves sharply lagging the equal-weighted averages. The reason is that they buy hot categories and sell cold ones.

For example, as the stock market bottomed in 2002, fund investors were redeeming stock funds and purchasing bond funds. As stocks recovered, they resumed buying stocks and cut back on bonds, so that by 2006 inflows to stock funds were triple the inflows into bond funds. This enthusiasm ended in 2008 when stock funds had their largest outflows in history, directly before the market rally in 2009 and 2010.

The same tendency often occurs within an asset category. It's well-known that fund buyers loaded up on high-growth shares in the late 1990s, only to get crushed by the collapse of the technology bubble. Less familiar are other examples of mistiming:

At least fund investors have company. Institutional investors behave much the same. From the boom/bust cycles of private equity and venture capital, to the frenetic performance-chasing of hedge fund buyers, to the asset allocation of public pension funds and endowments (which consistently are heavy stock buyers the year before a market crash), the big money looks a whole lot like the small money. Consider also exchange-traded funds, the allegedly civilized replacement for mutual funds. In 2011,  SPDR Gold Shares (GLD) became the world's largest ETF. Say no more.

As investors, this tells us that we should be wary of big asset bets and instead focus on fund selection and matching our investments to our goals. In short, think about investing and planning but don't try to be your own economist.

The myth of the dumb fund investor is harmful because it addresses a problem that does not exist and distracts from a large and real problem that very much does. To their detriment, investors chase category performance. They need to stop doing so. Category chasing is a big and universal problem that nobody adequately addresses--not Morningstar, not financial advisors, not the fund industry, not ETF providers, not the academic community, and not institutional investors. It's time to turn our collective attention in that direction. It's time to stop talking about what isn't and to start talking about what is.

Note: This article has been corrected since original publication. Please click here for details.

John Rekenthaler does not own (actual or beneficial) shares in any of the securities mentioned above. Find out about Morningstar’s editorial policies.