NEW YORK, Oct. 1, 2021 /PRNewswire/ -- The Consortium of Balsamic Vinegar of Modena (Aceto Balsamico di Modena) has partnered with Michelin-starred Chef Jonathan Benno to create an original dish that demonstrates the versatility of the European staple ingredient. Sharing his recipe for Ravioli Monégasque with Balsamic Vinegar of Modena, the partnership arrives just in time for the re-opening of his Manhattan flagship Benno following a brief hiatus due to the pandemic. 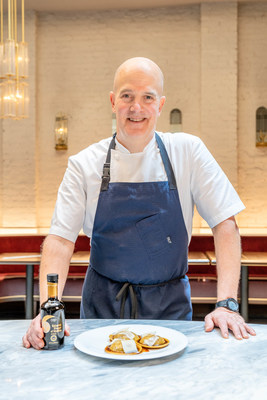 Officially re-opening today, the eponymous restaurant marks its return with the integration of one of Europe's most important agri-food products into its critically acclaimed menu.

Ravioli Monégasque (meaning of Monaco) is an interpretation of Monaco's famed national dish known as Barbagiuan – a fried ravioli typically filled with swiss chard and ricotta cheese. Leaning into the influences of the Italian Riviera just across the border, Chef Benno's version is not fried, instead featuring a fresh boiled pasta filled with braised beef shank, swiss chard, ricotta, Parmigiano Reggiano and Aceto Balsamico di Modena PGI Invecchiato (Aged Balsamic Vinegar of Modena) for a sweet and acetic finish that brightens up the decadent pasta.

While conceptually Benno pays homage to classic French gastronomy, Chef Benno is no stranger to Italian cuisine, having helmed a number of Italian concepts over the years, and currently serving as Executive Chef at Nomad's Roman-inspired pasticceria Leonelli. His partnership with Balsamic Vinegar of Modena reinforces his commitment to pushing the boundaries of epicureanism through a dish that celebrates both French and Italian culinary traditions.

About Chef Jonathan BennoConsidered one of the top chefs in the country, and recognized for his dedication to quality and craftsmanship, Jonathan Benno's career spans more than three decades, having worked in some of the world's finest restaurants. A graduate of the Culinary Institute of America, the spirit of his cuisine has been cultivated through his mentors including John Farnsworth, Michael Mina, Daniel Boulud, Tom Colicchio, and Thomas Keller, who helped shape his philosophy about food and dining, and instill in him the drive to settle for nothing less than excellence. Benno spent six years as the Chef de Cuisine of Per Se, during which time he helped earn the restaurant three Michelin stars and four stars from the New York Times and was named a Food & Wine Magazine "Best New Chef."

Most recently, Chef Benno spent six years at the helm of Lincoln Center's Lincoln Ristorante, where he gained critical acclaim for his contemporary Italian Cuisine. In 2018 the newly redesigned landmark The Evelyn hotel, located in New York's vibrant NoMad neighborhood, became home to the next chapter in Chef Benno's culinary epoch. He introduced three distinct, yet complementary concepts: Leonelli Restaurant & Bar, a casual Roman-inspired trattoria; Leonelli Bakery, a bakery and café inspired by the great bakeries of Rome and New York's rich history of Italian-American pastry shops; and his first eponymous project, Benno, a fine-dining restaurant serving Mediterranean cuisine, which received 3 stars from The New York Times and one Michelin star.

About Balsamic Vinegar of ModenaBalsamic Vinegar of Modena is one of the most important Italian agri-food products of the European Union. Dating back to ancient Roman times, the cooking of grape musts was used as a sweetener and condiment. Production of Balsamic Vinegar became linked with Modena during the 11th century. Today, production specifications require that all raw materials, processing, maturation, and aging take place in the provinces of Modena and Reggio Emilia and that the grape musts are from specific vines including Lambrusco, Sangiovese, Trebbiano, Albana, Ancellotta, Fortana, and Montuni.

A minimum maturation period of 60 days takes place at a temperature of 20 degrees Celsius, in barrels, vats, or casks made from precious woods such as Sessile Oak, Chestnut, Mulberry, or Juniper. In order for the product to be certified as Balsamic Vinegar of Modena, analytic and organoleptic tests by expert technicians and tasters are performed. The finished product is then packaged into glass, wooden, earthenware or terracotta containers of varying sizes. An extremely versatile product, Balsamic Vinegar of Modena can bring harmony and balance to the different characteristics of a dish's individual ingredients. Its distinctive, European characteristics include a clear and brilliant appearance, intense color, a bitter-sweet, balanced flavor, and slightly acetic and delicate aroma, persistent with woody overtones.