For the 9th season, the Seattle-based airline celebrates its Chief Football Officers' return to the field

SEATTLE, Sept. 7, 2021 /PRNewswire/ -- Touchdown! In celebration of Chief Football Officer Russell Wilson's upcoming season, guests can score extra points with Alaska Airlines this football season. Beginning today, guests wearing a Russell Wilson No. 3 jersey or a limited edition Alaska's Russell Wilson shirt (available from the Alaska Company Store) will be given early boarding for all Seattle (SEA) and Everett (PAE) departing flights for the duration of the football season. 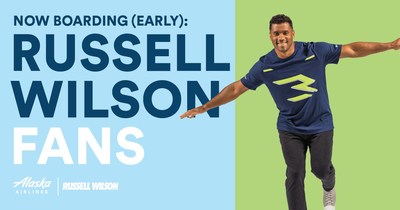 "This early boarding experience is a great way to cheer on our beloved Chief Football Officer Russell Wilson," said Sangita Woerner, senior vice president of marketing and guest experience for Alaska Airlines. "We can't wait to see all of the No. 3 jerseys at Sea-Tac and Paine Field this upcoming football season."

Wilson and Alaska enjoy a relationship that began in 2013 after his rookie year playing professional football. We've since teamed up on a number of community, youth, and education programs over the years. You can learn a lot about a person in nine years. Here are a few of our favorite memories of Russ from the archives:

"Going into my 10th year playing professional football, it's still a thrill and an honor to see fans wearing my No. 3 jersey around Seattle," said Wilson. "I'm so thankful to have the support of both the fans and Alaska Airlines. With the early boarding Alaska is offering this season, fans might even catch me with my jersey on at the airport!"

Keep an eye on the skies for additional Russell Wilson and Alaska fun this football season.

About Alaska AirlinesAlaska Airlines and its regional partners serve more than 120 destinations across the United States and to Mexico, Canada and Costa Rica. The airline emphasizes Next-Level Care for its guests, along with providing low fares, award-winning customer service and sustainability efforts. Alaska is a member of oneworld. With the global alliance and the airline's additional partners, guests can travel to more than 1,000 destinations on more than 20 airlines while earning and redeeming miles on flights to locations around the world. Learn more about our climate impact goals at blog.alaskaair.com. Read about Alaska Airlines at newsroom.alaskaair.com and blog.alaskaair.com. Alaska Airlines and Horizon Air are subsidiaries of Alaska Air Group (NYSE: ALK).