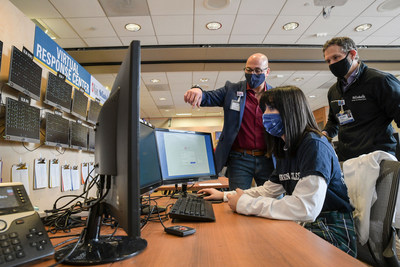 Starting Dec. 19, a cadre of "virtual monitoring technicians" is now stationed 24/7 before digital screens in St. Luke's Virtual Response Center (VRC) in an office building in Allentown a few miles from the nearest hospital. For eight- to 12-hour shifts these twenty-somethings, many who started the job when they were home on Christmas break, watch the vital signs of seriously ill patients sent by the Masimo Patient SafetyNet wireless devices to computer screens.

In April, St. Luke's became one of the first health systems worldwide to use the Masimo SafetyNet cloud-based patient management platform to help clinicians care for patients remotely. It comprises a wireless finger sensor to detect oxygen saturation, respiration and heart rate, vital signs that provide doctors and nurses with valuable clinical data that helps to inform treatment decisions.

Kendra Siegfried, a Widener University nursing major, was one of the first students to join this new program in the VRC following a full-day orientation to the technology, medical terms and care processes.

During her shift watching a large monitor in the VRC displaying the statuses of about 50 patients, she reported to the RN in the Center several times when alarms were triggered as patients' oxygen levels dipped dangerously low. She also called the inpatient bedside nurse when the battery of a patient's Masimo remote finger-probe monitor was weak and needed replacing.

Though Siegfried plans to start her nursing career in direct patient care—geriatrics or pediatrics—the college junior won't rule out working in healthcare technology at some point, such as the work she's doing in the VRC.

St. Luke's started recruiting these science-savvy youngsters, many majoring in the biological sciences and health fields, from among their employees' families and friends, and directly from colleges and universities in Pennsylvania. Siegfried's aunt works for the network.

"Back in November, when we saw that the second wave of COVID was coming, we realized we needed to find the right people with the right backgrounds, abilities and attitudes to help us," says Kim Sargent, MSN, RN, IT Business Relationship Manager, who heads up the project.

The network sent a flier to the workforce, which quickly brought more than 400 applications from interested students attending schools like Penn State, Kings College, Duquesne and Wilkes universities. Fourteen have been hired so far, many of them home for the holidays or homebound and taking online classes. They are paid by the hour and their flexible schedules in the VRC allow for other part-time work and school studies.

Steven McCreary, of Easton, whose first day in the VRC was Dec. 21, had learned of the job from his mother, Maria who is a nurse at St. Luke's Warren campus. The recent graduate of Arcadia University majored in political science but realizes that he might want to pursue a different profession that could involve healthcare technology.  In addition to his shifts in the VRC, McCreary is an algebra tutor and a store clerk.

He was working with Brittany Cunfer, RN, BSN in Virtual Response Center "onboarding" new patients to COVID surge units and monitoring the oxygen levels, heart and respiration rates of patients on the scrolling computer screen.  Cunfer, who joined the VRC when it went live in April, meanwhile was tracking trends and assessing other patient data on the more than 200 COVID patients throughout the network, in frequent contact with the bedside nurses on the critical care units.

"These students are an important part of the solution to our staffing challenges brought on by phase two of the COVID crisis," Sargent adds. "We're hoping they'll support us throughout pandemic, whether they're studying at home or coming home on weekends," says Sargent.

The network will begin monitoring nursing home patients with the Masimo remote, wireless, technology in mid-January. They will install it in select patients' homes later that month, which will facilitate the earlier discharge of patients from the hospital and free up the critically needed beds.

About St. Luke's Founded in 1872, St. Luke's University Health Network (SLUHN) is a fully integrated, regional, non-profit network of more than 16,000 employees providing services at 12 hospitals sites and 300+ outpatient sites.  With annual net revenue in excess of $2.5 billion, the Network's service area includes 11 counties: Lehigh, Northampton, Berks, Bucks, Carbon, Montgomery, Monroe, Schuylkill and Luzerne counties in Pennsylvania and Warren and Hunterdon counties in New Jersey.  Dedicated to advancing medical education, St. Luke's is the preeminent teaching hospital in central-eastern Pennsylvania.  In partnership with Temple University, St. Luke's established the Lehigh Valley's first and only regional medical school campus.  It also operates the nation's longest continuously operating School of Nursing, established in 1884, and 38 fully accredited graduate medical educational programs with 347 residents and fellows.  St. Luke's is the only Lehigh Valley-based health care system to earn Medicare's five- and four-star ratings (the highest) for quality, efficiency and patient satisfaction.  St. Luke's is both a Leapfrog Group and Healthgrades Top Hospital and a Newsweek World's Best Hospital.  U.S. News & World Report ranked St. Luke's #1 in the Lehigh Valley and #6 in the state.  Three of IBM Watson Health's 100 Top Hospitals are St. Luke's hospitals.  St. Luke's University Hospital has earned the 100 Top Major Teaching Hospital designation from IBM Watson Health eight times total and six years in a row. St. Luke's has also been cited by IBM Watson Health as a 50 Top Cardiovascular Program.  Utilizing the Epic electronic medical record (EMR) system for both inpatient and outpatient services, the Network is a multi-year recipient of the Most Wired award recognizing the breadth of the SLUHN's information technology applications such as telehealth, online scheduling and online pricing information.  St. Luke's is also recognized as one of the state's lowest cost providers.