“We’re pleased to announce a plan to bring additional investment to our markets and help grow these vibrant and diverse communities and businesses — at a time when these efforts are truly needed,” said Frank B. Holding, chairman and chief executive officer of First Citizens. “We have a legacy of giving back to the cities and towns we serve, and this plan serves as a testimony to the commitments and values that will represent our combined company. We’re glad to establish a new partnership with NCRC and its members in creating this plan and look to build even stronger relationships that will last well into the future.”

“This community benefits plan expands on the ongoing work that we’ve already put in place to support affordable home ownership, small business lending and community development,” Holding said. “It solidifies our path forward and will accelerate new opportunities for underserved communities and customers.”

The support provided through the plan will assist communities that First Citizens Bank will serve across the combined company’s retail bank footprint.

First Citizens participated in virtual listening sessions late last year with national and state members of NCRC, an association of more than 600 community-based organizations that promote access to basic banking services, affordable housing, entrepreneurship, job creation and vibrant communities for America’s working families. The plan is a direct result of input received from those meetings and was formed in conjunction with the NCRC and its member organizations.

“We appreciate the leadership and proactive efforts of First Citizens to collaborate with us and develop a substantial plan that makes a significant commitment of investments, services and loans for LMI communities and neighborhoods of color," said NCRC CEO Jesse Van Tol. “Our members played a critical role and provided essential input in our discussions. It’s rewarding when institutions and communities can come together like this to make a lasting impact.”

In addition, the plan provides $50 million for Community Reinvestment Act (CRA)-qualified philanthropic giving through 2025. Also, a community advisory board will provide input and feedback on the plan’s progress.

In October 2020, First Citizens and CIT announced a proposed merger, which would create a top 20 U.S. bank based on assets. The merger is expected to close in the second quarter of 2021, subject to customary closing conditions, including regulatory approvals. The combined company will operate under the First Citizens name. For more information, visit firstcitizens.com.

The National Community Reinvestment Coalition and its grassroots member organizations create opportunities for people to build wealth. We work with community leaders, policymakers and financial institutions to champion fairness in banking, housing and business. NCRC was formed in 1990 by national, regional and local organizations to increase the flow of private capital into traditionally underserved communities. NCRC has grown into an association of more than 600 community-based organizations in 42 states that promote access to basic banking services, affordable housing, entrepreneurship, job creation and vibrant communities for America’s working families. More: www.ncrc.org.

Forward-Looking StatementsThis communication contains “forward-looking statements” within the meaning of the Private Securities Litigation Reform Act of 1995 regarding the financial condition, results of operations, business plans and future performance of First Citizens and CIT. Words such as “anticipates, ” “believes,” “estimates,” “expects,” “forecasts,” “intends,” “plans, ” “projects,” “targets,” “designed,” “could,” “may,” “should,” “will” or other similar words and expressions are intended to identify these forward-looking statements.  These forward-looking statements are based on First Citizens’ and CIT's current expectations and assumptions regarding First Citizens’ and CIT’s businesses, the economy, and other future conditions.

Because forward-looking statements relate to future results and occurrences, they are subject to inherent risks, uncertainties, changes in circumstances and other factors that are difficult to predict.  Many possible events or factors could affect First Citizens’ and/or CIT’s future financial results and performance and could cause the actual results, performance or achievements of First Citizens and/or CIT to differ materially from any anticipated results expressed or implied by such forward-looking statements.  Such risks and uncertainties include, among others, (1) the risk that the cost savings, any revenue synergies and other anticipated benefits of the proposed merger may not be realized or may take longer than anticipated to be realized, including as a result of the impact of, or problems arising from, the integration of the two companies or as a result of the condition of the economy and competitive factors in areas where First Citizens and CIT do business, (2) disruption to the parties’ businesses as a result of the announcement and pendency of the proposed merger and diversion of management’s attention from ongoing business operations and opportunities, (3) the occurrence of any event, change or other circumstances that could give rise to the right of one or both of the parties to terminate the definitive merger agreement between First Citizens and CIT, (4) the risk that the integration of First Citizens’ and CIT’s operations will be materially delayed or will be more costly or difficult than expected or that First Citizens and CIT are otherwise unable to successfully integrate their businesses, (5) the outcome of any legal proceedings that may be or have been instituted against First Citizens and/or CIT, (6) the failure to obtain required governmental approvals (and the risk that such approvals may result in the imposition of conditions that could adversely affect the combined company or the expected benefits of the proposed transaction), (7) reputational risk and potential adverse reactions of First Citizens’ and/or CIT’s customers, suppliers, employees or other business partners, including those resulting from the announcement or completion of the proposed merger, (8) the failure of any of the closing conditions in the definitive merger agreement to be satisfied on a timely basis or at all, (9) delays in closing the proposed merger, (10) the possibility that the proposed merger may be more expensive to complete than anticipated, including as a result of unexpected factors or events, (11) the dilution caused by First Citizens’ issuance of additional shares of its capital stock in connection with the proposed merger, (12) general competitive, economic, political and market conditions, (13) other factors that may affect future results of CIT and/or First Citizens including changes in asset quality and credit risk, the inability to sustain revenue and earnings growth, changes in interest rates and capital markets, inflation, customer borrowing, repayment, investment and deposit practices, the impact, extent and timing of technological changes, capital management activities, and other actions of the Federal Reserve Board and legislative and regulatory actions and reforms, and (14) the impact of the global COVID-19 pandemic on First Citizens’ and/or CIT’s businesses, the ability to complete the proposed merger and/or any of the other foregoing risks.

INVESTORS AND SECURITY HOLDERS ARE URGED TO READ THE REGISTRATION STATEMENT ON FORM S-4 AND THE JOINT PROXY STATEMENT/PROSPECTUS INCLUDED WITHIN THE REGISTRATION STATEMENT ON FORM S-4 (AND ANY OTHER RELEVANT DOCUMENTS FILED WITH THE SEC IN CONNECTION WITH THE PROPOSED TRANSACTION OR INCORPORATED BY REFERENCE INTO THE JOINT PROXY STATEMENT/PROSPECTUS) BECAUSE SUCH DOCUMENTS CONTAIN IMPORTANT INFORMATION REGARDING FIRST CITIZENS, CIT, THE PROPOSED MERGER AND RELATED MATTERS.

A photo accompanying this announcement is available at https://www.globenewswire.com/NewsRoom/AttachmentNg/3c130c0c-f14b-4853-9b1a-226d7918c3bb 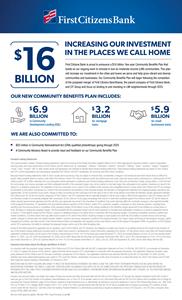 First Citizens Bank announces a five-year community benefits plan that builds on its ongoing work and will reinvest at least $16 billion to serve low- and moderate-income (LMI) communities and borrowers.