From zero-expense ratio funds to clean share classes to all-passive portfolios, the asset-management industry faces major cost pressure. The trend is global and the drivers are structural. The Fees and Expenses chapter of the 2019 Global Investor Experience Study cites growing cost-consciousness, changing advisor business models, and regulation as some of the forces bringing fees down.

Falling fees are undoubtedly good for investors, but they also mean lower revenues and margin compression for investment management. Earlier this year, Morningstar equity analysts downgraded their outlook for several publicly traded asset managers because of “secular headwinds.” Unsurprisingly, the industry is turning to mergers and acquisitions, automation, and head-count reduction.

Yet there is one corner of the market that has not felt cost pressure: indexing. The shift from active to passive management has greatly benefitted providers of the indexes that serve as both benchmarks and investment strategies. Margins are rising and moats are widening. As the industry has consolidated, the dominant index players have exercised pricing power, raising licensing fees beyond the rate of inflation.

The index industry needs more competition, especially when it comes to market exposure or beta benchmarks. As argued in the white paper “ Asset Management in an Era of Cost Pressure: An Index Response,” indexes representing the same market segments are typically interchangeable. Asset managers can lower costs and benefit investors by combatting rising index-licensing fees.

Why rising index-licensing fees are unjustified

Yves Perrier, CEO of global asset manager Amundi, told the Financial Times, “Index fees are a real problem. These providers are an oligopoly and the prices they charge are out of line with the value they add.”

Perrier hits on a critical point: While creating an index isn’t simple, the end products tend to be undifferentiated, at least on the traditional beta side. Two benchmarks that define the investable universe for a market or market segment are likely to look and act similarly.

Consider the holdings-based comparison below. This plots two developed markets global equities indexes onto the Morningstar Style Box™, in which the vertical axis represents security size and the horizontal axis represents investment style. The centroid is plotted based on the weighted average of index constituents. The ownership zone surrounds the 75% of portfolios closest to the centroid. 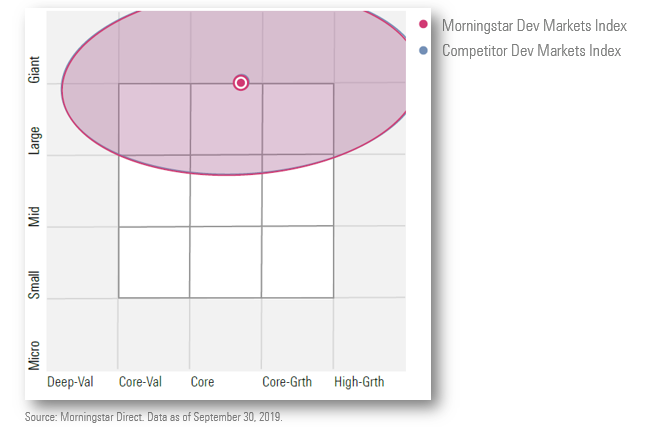 As the image shows, these benchmarks created by different providers and targeting a similar percentage of the investable market net out almost identically from a holdings perspective, even across roughly 25 countries, one dozen currencies, and more than 1,500 constituents.

A report on benchmarking from the Spaulding Group explains this similarity: “There is minimal difference between several index providers that serve the U.S. and global equity markets in terms of performance; while methodology varies among indexes, those variances are largely tempered by capitalization weighting.”

Unsurprisingly, weighting constituents in proportion to their size leads the two indexes to comparable returns. The chart below shows near-identical trailing returns through Sept. 30, 2019.

The principle of index interchangeability extends to the bond side too, where a benchmark must capture a larger number of securities with different maturities and structures. As shown on the chart below, on parameters such as sector composition, credit quality, interest-rate sensitivity, and yield, two indexes representing the U.S. bond market net out similarly.

And as with equities, the chart below shows that bond indexes focused on the same market produce similar returns.

Incumbent index providers benefit from name recognition and switching costs. But as the above comparisons demonstrate, beta indexes can often be used interchangeably. Index-licensing fees should reflect the commodity nature of the product.

Signs of disruption have manifested in recent years. For instance:

The benefits of using a neutral third-party benchmark are clear: Independence matters when it comes to benchmarking. But what’s important is choosing the most appropriate benchmark, not the most well-known.

Investors, advisors, asset managers, and other market participants have much to gain by having more choice among indexes. Benchmarks have immense utility as analytical tools: They help investors understand risk and return, assemble diversified portfolios, and measure performance. Not only will increased competition lower costs, it will also provide a more robust tool kit with which to power investment decision-making.

Dan Lefkovitz is a strategist for Morningstar's Indexes group.

For our full analysis of the need for disruption in the index industry, download our white paper.
Get My Copy