The combination of tightening credit spreads and falling interest rates led to an admirable performance across the fixed-income sector during the second quarter. The Morningstar US Core Bond Index (our broadest measure of the fixed-income universe) rose 2.82%. The increase was largely driven by a significant tightening of credit spreads in the corporate bond market. In addition, the returns were also helped by the continued decline in interest rates. In the short end of the curve, the yield on the two-year U.S. Treasury bond declined by 7 basis points to end the second quarter at 0.16%. In the middle of the curve, the five- and 10-year bonds fell by 8 and 4 basis points, respectively, to 0.29% and 0.66%. However, in the longest end of the curve, the yield on the 30-year Treasury rose by 6 basis points to 1.41%. Breaking down the return of the Core Bond Index by duration, the Short-Term Core Bond Index rose by 1.06%, the Intermediate Core Index increased 2.92%, and the Long-Term Core Index surged 5.75%.

The standout returns this quarter were generated in the corporate bond sector as credit spreads tightened significantly, recouping much of the widening that occurred during the market rout in the first quarter. Near the end of the first quarter, we highlighted that corporate credit spreads had widened to what we viewed as attractive levels for long-term investors. For investors able to withstand additional market volatility, we suggested that it was an opportune time to rebalance fixed-income portfolios and to layer in additional corporate credit fund exposure. Since the end of the first quarter, the average credit spread of the Morningstar US Corporate Bond Index (our proxy for investment-grade corporate bonds) has tightened 138 basis points to +153 and the Morningstar US High-Yield Index has tightened 232 basis points to +639. Even after this tightening, both indexes remain significantly wider than where they traded at the end of 2019. At that time, the investment-grade spread was +97 and the high-yield spread was +356. Comparatively, the long-term average for investment-grade bonds is +154 and the long-term average for high yield is +555.

Based on how quickly these credit spreads tightened over the quarter, corporate bond funds realized some of their strongest quarterly returns over the history of our index. The Morningstar US Corporate Bond Index rose 9.22% in the second quarter, more than offsetting the 4.08% decline experienced in the first quarter. The Morningstar US High-Yield Bond Index rose 10.29% in the second quarter, also one of its strongest quarterly returns; however, this return was not able to fully offset the 12.91% decline it had registered in the first quarter. 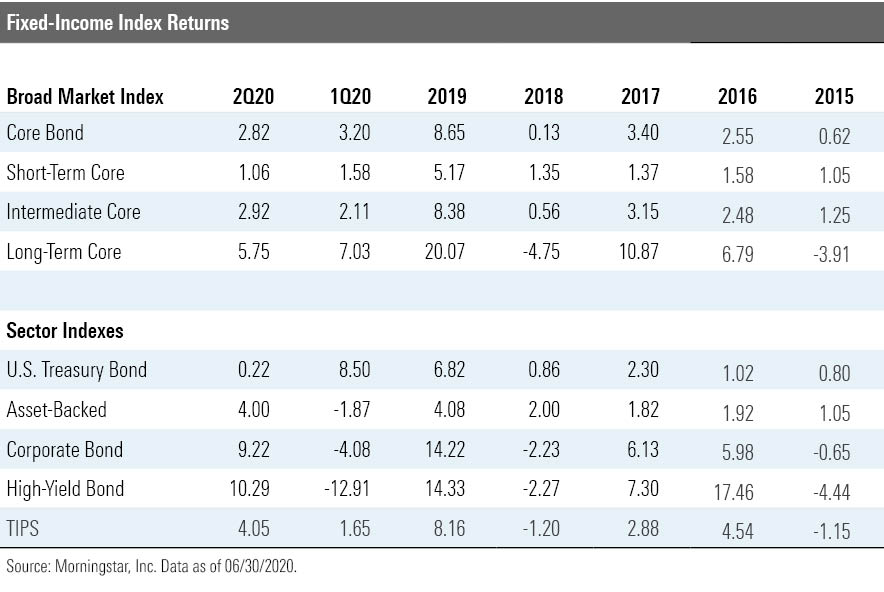 Worst Fears Fail to Materialize The performance across the fixed-income markets in the second quarter was largely shaped by the myriad of actions and programs undertaken by the Federal Reserve at the end of the first quarter. The Fed’s actions initially helped to stabilize the markets and secondarily supported the economy as coronavirus-related shut-ins weighed on economic activity. For greater detail on the Fed’s actions and programs, see here and here.

In the first quarter, corporate credit spreads widened to their second-highest level over the past 20 years. Investors had dumped corporate bonds based on a combination of higher forecast default rates, expectations for a deluge of downgrades from investment-grade to high yield, and forced liquidations from leveraged investors. At that point, we opined that for investors able to withstand additional market volatility, it was an opportune time to rebalance fixed-income portfolios and to layer in additional corporate credit fund exposure.

Since the end of the first quarter, forced liquidations from leveraged investors who had to sell to meet margin calls have come to a halt, default rates have not increased as much as feared, and the tidal wave of defaults has not materialized. In addition, it appears that the worst of the economic contraction has passed, and we may be in the early stages of economic recovery. As shut-in orders have been lifted, employment has been improving as jobs are coming back.

In addition to the strong returns experienced in the corporate bond market, the stock market rose by approximately 20% in the second quarter. At the end of the first quarter, we had noted that the median price/fair value of the stocks that Morningstar covers in the U.S. was 0.78. Historically, when our median price/fair value metric has dropped into the 0.80-0.85 range, it has indicated that the market has probably overreacted to the downside, and it represented a good entry point for long-term investors. However, following the strong returns since then, the median price/fair value has risen to 1.03 and is no longer undervalued.

We think that market performance in the first and second quarter supports our views for the long-term case for a balanced portfolio and for rebalancing positions during times of market turmoil based on risk tolerance. Looking forward, we expect long-term investors in a broad market equity index will earn an average market rate of return. Investors who prefer to purchase individual company stocks should focus on those companies with an economic moat that are currently trading at a comfortable margin of safety below its intrinsic value. For our analysts' top ideas in each sector this quarter, see our recent article, 33 Undervalued Stocks.

This article has been written on behalf of Morningstar, Inc. and is not the view of DBRS Morningstar.