Market-cap-weighted indexes, and low-cost funds that track them, have historically proven tough to beat. But tough shouldn’t be interpreted as impossible. As it turns out, many strategies that follow simple rules have fared better. And they don’t possess a magical source of alpha. Rather, their outperformance comes from a few well-known factors.

A Paradox? Market efficiency is often cited as a big reason why market-cap-weighted indexes, and low-cost funds that track them, are so notoriously difficult to beat. Any stock’s price, and its corresponding weight, should incorporate all known information--including its current value and expected return--limiting the chance that anyone can gain an advantage.

If the market efficiently prices stocks, then it seems reasonable to expect that other weighting approaches should underperform, as they are ignoring the crowd’s collective wisdom. But reality doesn’t fully reflect that theory.

Paradoxically, many strategies that ignore price and employ simple alternative rules to weight stocks have historically fared better than the market. For example, the S&P 500 Equal Weight Index ignores market prices by assigning the same 0.2% weight to every constituent in the market-cap-weighted S&P 500.

Exhibit 1 shows that its performance relative to the cap-weighted index has been nothing short of impressive, with total and risk-adjusted returns both outperforming over the prior five decades. Each index held stock in the same 500 companies, so the performance gap was directly caused by the different weighting schemes. But why?

Factors Hidden in Plain Sight To answer that question, let’s take a closer look at the equal weight index. By design, it shifts assets away from the largest companies and allocates the difference to smaller names. For example, Apple (AAPL)--the largest S&P 500 component--commanded 4.58% of the cap-weighted benchmark on Dec. 31, 2019, while Garmin (GRMN) represented only 0.07%. By comparison, the equal-weight strategy assigns the same 0.2% weight to both. 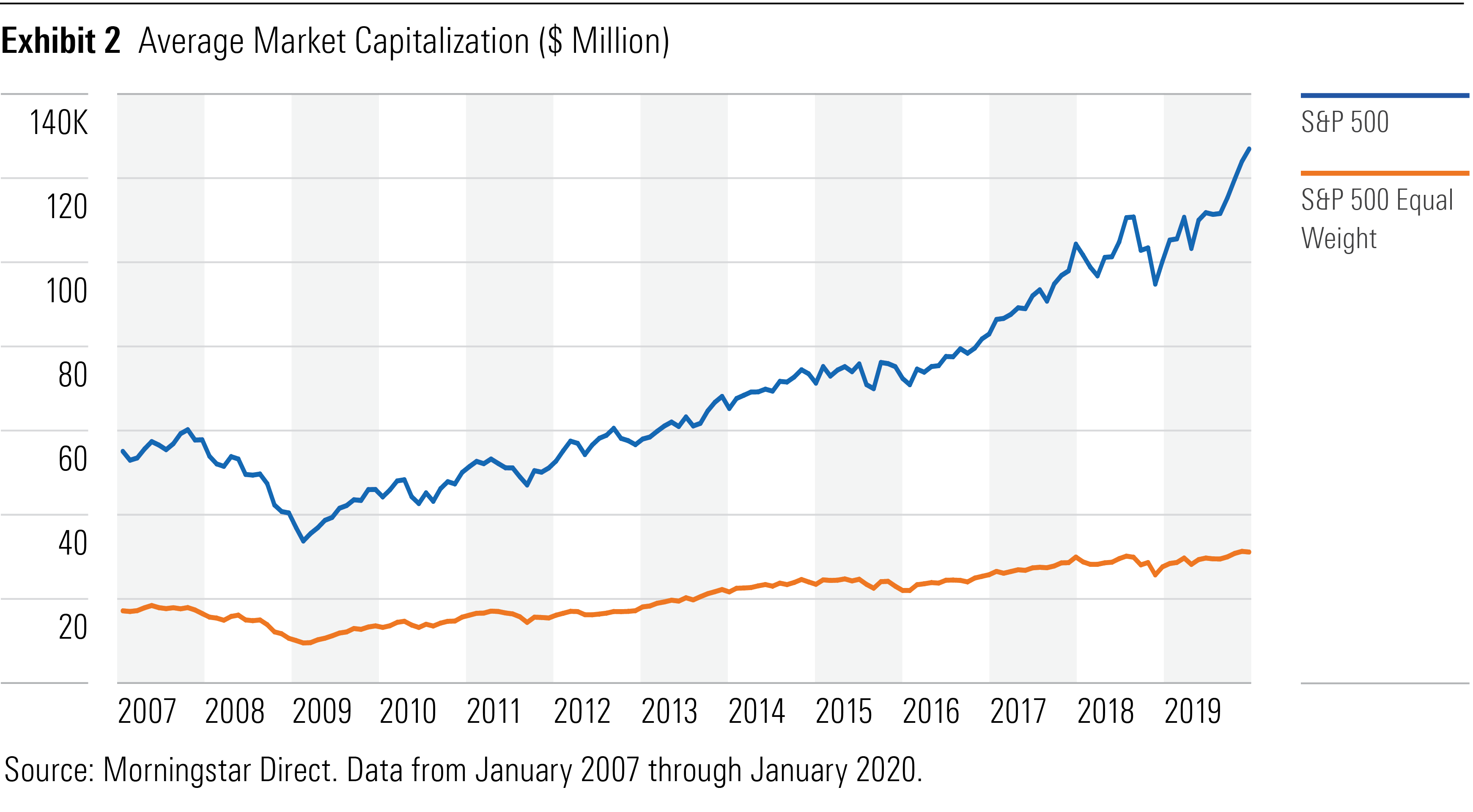 Rebalancing an equal-weight index also injects a mild value tilt into the portfolio. In order to maintain its desired weights, the strategy will sell shares that have appreciated relative to their target weight and use the proceeds to buy those that have declined since the previous rebalance.

By assigning the same weight to each constituent, the equal weight index is simply tilting toward stocks with smaller market capitalizations and lower valuations, which have historically outperformed their larger and more expensive counterparts. Why they’ve outperformed is up for debate. This could just be compensation for risk, in which case, the strong performance of the equal weight index is doesn’t necessarily conflict with the theory of market efficiency. However, it’s also possible that the success of the small size and value factors is partially due to mispricing.

In any case, the results of a three-factor regression in Exhibit 3 verify that these factor exposures largely explain the outperformance of the equal-weight strategy. The small-cap and value coefficients were both statistically significant, while alpha was essentially zero. There is nothing special about equal weighting after controlling for its style tilts.

The S&P 500 Equal Weight Index is one example of a much larger subset of alternatively weighted strategies that have historically beaten the market. In “The Surprising Alpha From Malkiel’s Monkey and Upside-Down Strategies,” [1] researchers from Research Affiliates examined different ways to weight stocks, including volatility (both high and low), earnings growth, and fundamentals (among others). All of these alternatively weighted strategies outperformed a market-cap-weighted index because they all tilted toward stocks with smaller market capitalizations and lower valuations, even if the tilt was unintentional.

The researchers went a step further and inverted the weight of each stock in these alternative strategies. Intuitively, if the alternative strategies beat the market, then inverting the weights should cause them to underperform. But surprisingly, the inverse portfolios also leaned toward stocks with smaller market capitalizations and lower valuations and wound up beating the market-cap-weighted portfolio.

The researchers then tested randomly assembled portfolios to further test this phenomenon and reached the same conclusion. In short, just about any strategy that did not weight its holdings by market capitalization ended up tilting toward stocks with smaller market capitalizations and lower valuations, which helped them outperform a market-cap-weighted benchmark. Had value and small size not paid off, the story probably would have been different.

Beyond Factors There is one more twist to this story. Some of these alternatively weighted strategies can gain an advantage through fortuitous timing of their rebalancing activity. Mechanically shifting assets away from companies that have become more expensive and toward those that are now cheaper can be an advantage when the market’s valuation reaches extremes (either too expensive or too cheap).

For example, The FTSE RAFI U.S. 1000 Index weights its holdings by several fundamental metrics. This causes it to increase its weight on stocks as their price declines relative to those fundamentals, making it a value strategy. It happens to reconstitute annually on the third Friday in March--a date that closely aligned with the U.S. market’s inflection point in 2009. Rebalancing at that time caused it overweight the cheapest stocks when prices were near their low point, meaning they had the most to offer as prices appreciated.

The effect of rebalancing near the market low is evident in Exhibit 4, which charts the growth of the FTSE RAFI U.S. 1000 Index relative to the market-cap-weighted Russell 1000 Value Index. Both indexes provided similar performance when the line was flat. The RAFI Index outperformed when the line sloped upward and underperformed when it sloped downward. The sharp upward slope between April and October 2009 was the only period where it had a significant advantage over the market-cap-weighted Russell 1000 Value Index. 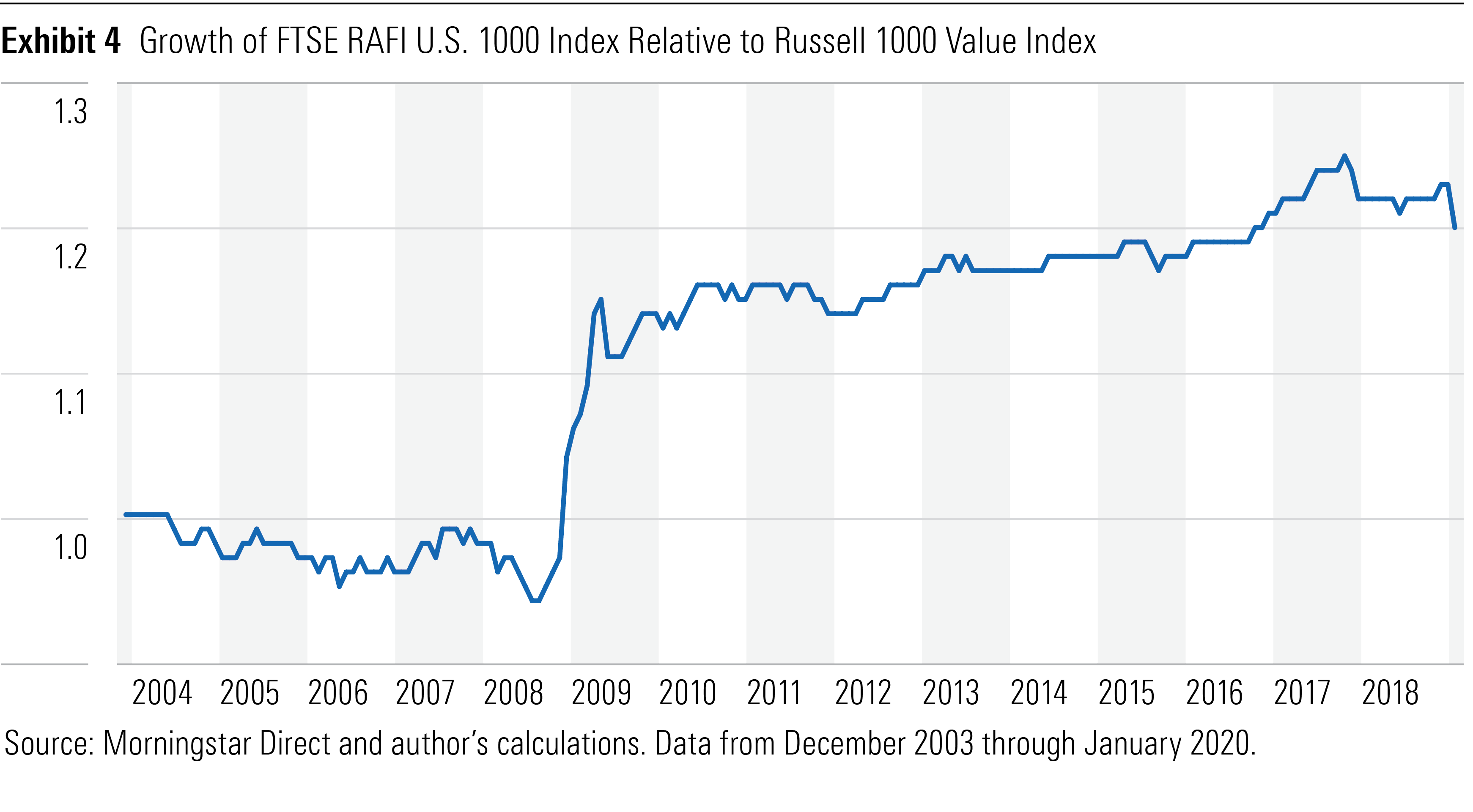 The caveat with this outperformance is that the rebalance needs to be timed so that it coincides with mean-reversion in valuations, which often occurs when there’s a change in the direction of the market. But it’s nearly impossible to predict when those inflection points will occur. Thus, the surge of outperformance over those seven months in 2009 isn’t representative of what the strategy typically delivers. Rebalancing away from expensive stocks and into cheaper ones can still provide an advantage when valuations mean revert, but the benefit will likely be less significant in trending markets.

No Snowflakes Here The evidence suggests that there’s nothing special about most alternatively weighted strategies. They’re often just repackaged versions of the size and value factors. The factor exposures that they provide should be tempered against their fees because there may be a cheaper and more consistent way to access the same factors. 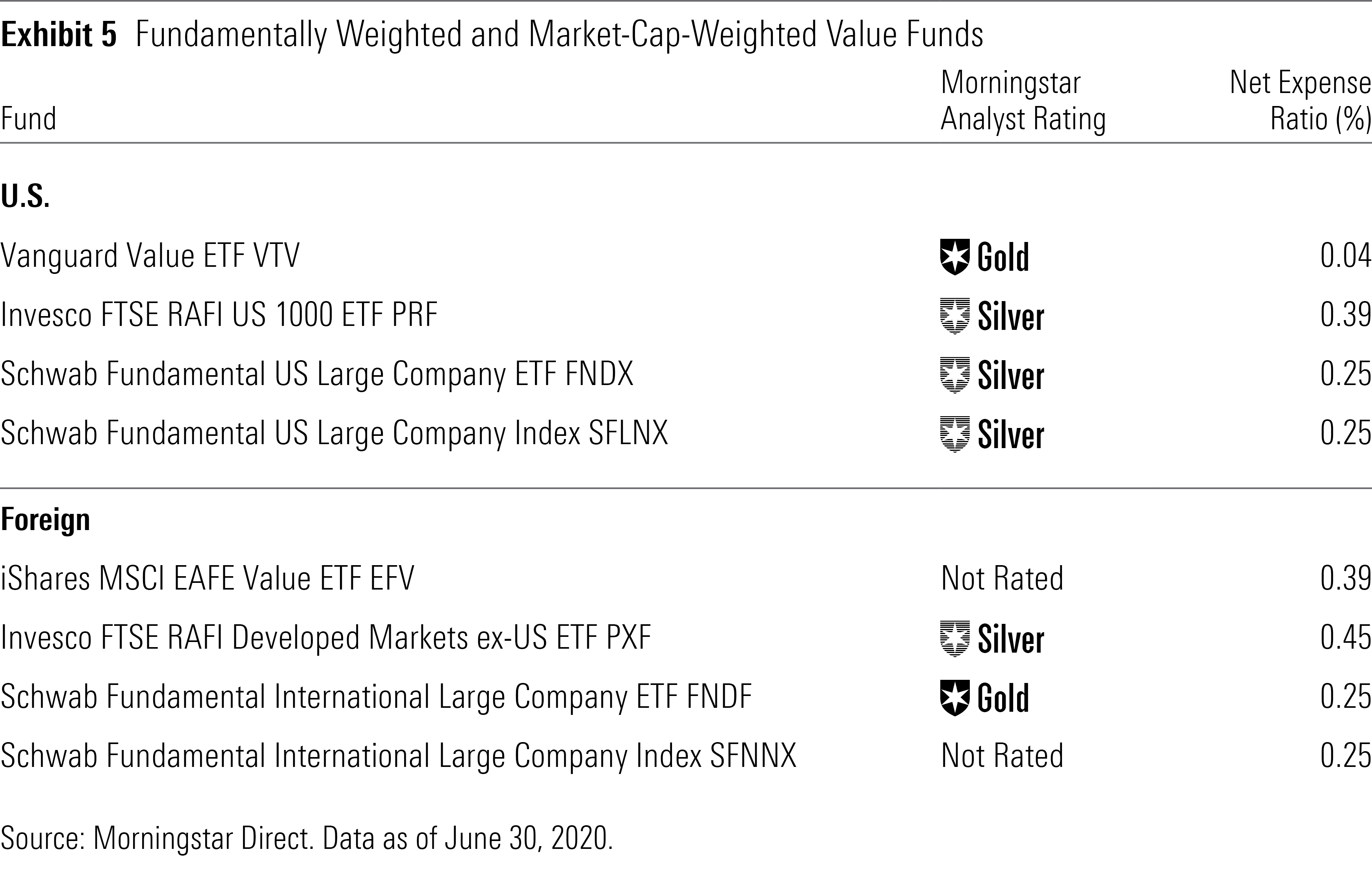 Daniel Sotiroff does not own (actual or beneficial) shares in any of the securities mentioned above. Find out about Morningstar’s editorial policies.