In this first of two articles, we see an U.S. economic recovery that is clearly underway. Our second article examines what we expect that recovery to look like.

After several months of dour data rolling in for the U.S. and global economies, the surprisingly positive U.S. jobs report on June 5 and retail sales report on June 16 have given investors a glimpse of the recovery from the coronavirus. For the United States in particular, an economic recovery from trough April levels is clearly underway, thanks to lessened social distancing plus unprecedentedly large fiscal stimulus. These factors should continue to play out in the second half of 2020, though there will be some bumps on the road to recovery.

We expect broad vaccine availability in the first half of 2021, clearing the way for a full normalization of economic activity in the U.S. and abroad. In the meantime, fiscal stimulus is playing a crucial role in limiting the knock-on economic damage from the virus. Private income has actually surged thanks to the stimulus. A good deal of the extra income is supporting spending, but the saved portion is bolstering household and firm balance sheets, which should lay the groundwork for a robust recovery. So far, signs of long-run economic damage appear small, as evidenced by the rapid rebound in employment in hard-hit industries in May. We expect robust catch-up growth in the years following 2020. By 2024, we think that the U.S. GDP level will recover to just 1% below our pre-COVID-19 expectation.

Even with May’s surprise rebound in employment and retail sales, broad indicators of U.S. economic activity point to a double-digit GDP decline in the second quarter. Activity was down sharply for key indicators through April, and total employment in May was still 13.5% below January levels. 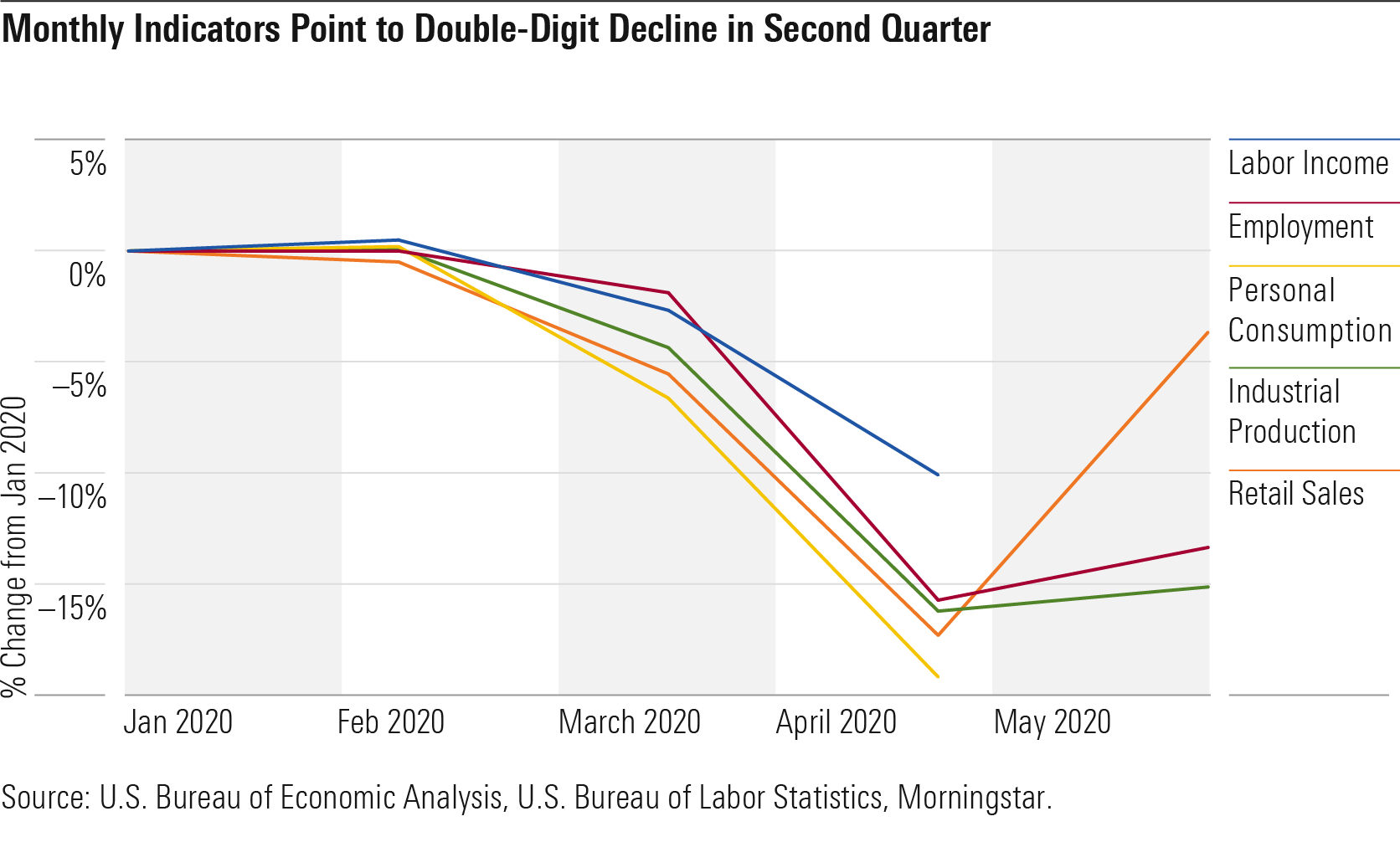 The overall drop in activity has far surpassed the peak-to-trough decline during the Great Recession. This is especially the case for personal consumption. The 19.4% drop in (nominal) personal consumption from January to April 2020 dwarfs the 3.9% drop from June 2008 to March 2009; in fact, this year’s drop is by far the largest in the post-World War II era. 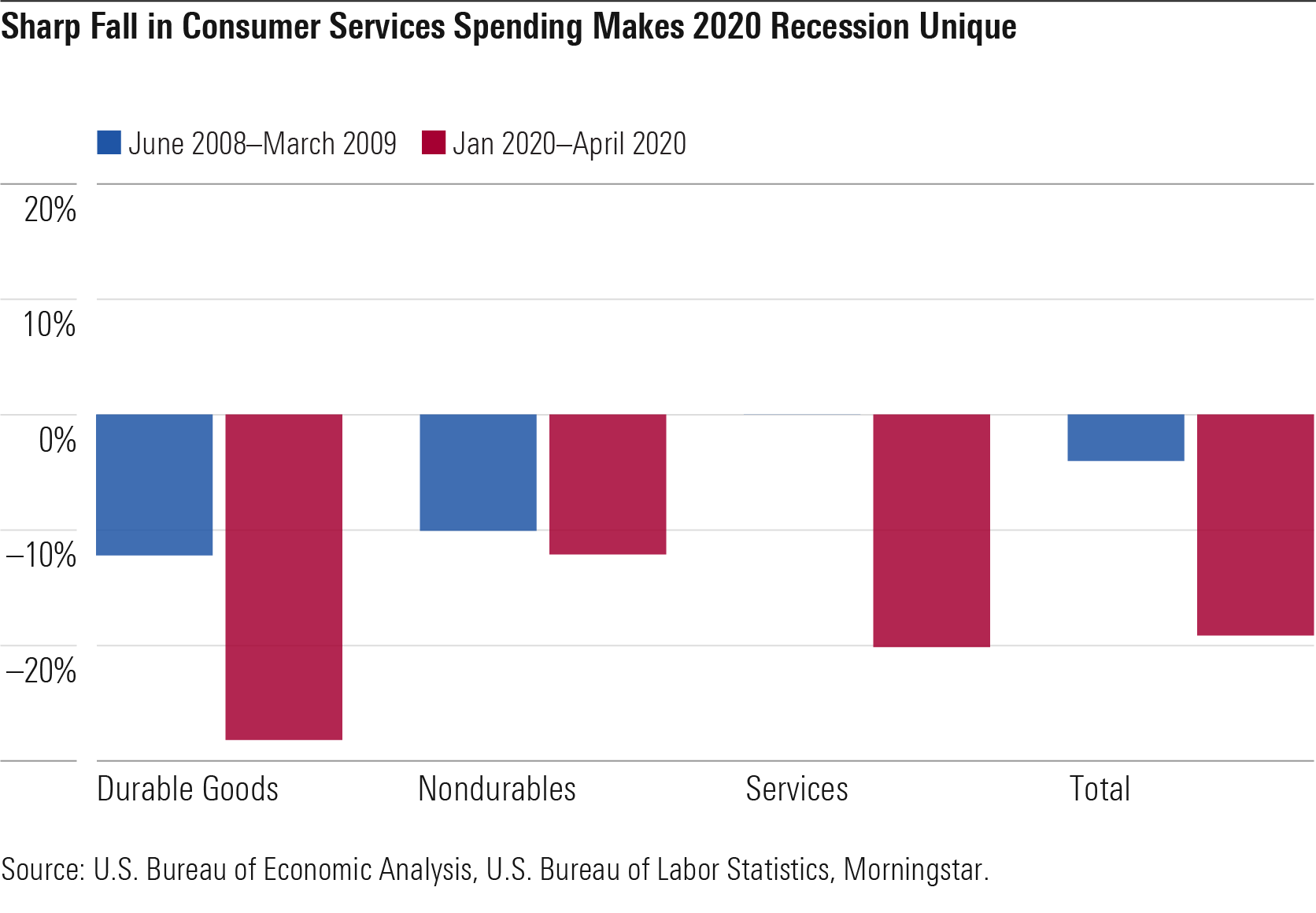 The thundering rebound in retail sales in May points to rapidly improving consumer sentiment. However, overall personal consumption probably didn’t recover as strongly in May, given that retail sales don’t incorporate consumer services spending. If we assume that services spending was still down around 12%-14% in May (versus January levels), then overall personal consumption was still down about 10%, even incorporating the surge in spending on goods.

Retail Sales Came Roaring Back in May Following a sharp rebound, retail sales (excluding restaurants) in May are now merely 4% below January 2020 levels. Excluding gas station sales, retail sales are down merely 1%.

At the trough in April, retail sales were down 18%, exceeding the Great Recession drop. During a typical recession, durable goods spending falls sharply as consumers pull back on big-ticket purchases like autos, appliances, electronics, and furniture. Some of that has occurred in 2020, indicating that precautionary saving probably drove a good deal of the reduced spending in April. This is particularly the case for motor vehicles (accounting for over 20% of retail sales), where sales fell 35% from January through April. Given that auto dealers remained open in most states during the lockdowns, and that COVID-19 transmission concerns are relatively small in an auto dealership setting, most of the decline was probably driven by consumers’ heightened economic uncertainty rather than narrow concerns about social distancing. Motor vehicle spending recovered aggressively in May along with consumer sentiment.

By contrast, the massive declines seen among apparel, electronics and appliance, and home and furniture retailers were probably driven mostly by social distancing. Declines in these categories remain high through May, though rapid substitution to online retailers has probably curbed the overall impact on consumer expenditure on these items.

Employment Losses Have Been Larger (and Different) Compared With Prior Recessions The distress in U.S. labor markets has surpassed all post-WWII recessions. In April, the employment/population ratio fell to 51.3% and the unemployment rate surged to 14.7%, both the worst levels since the Great Depression.

The nature of the job losses has been quite different from recent recessions. Construction and manufacturing are typically the largest drivers of net job losses during recessions, and in the last two recessions they accounted for the majority of job losses. This is unsurprising, given that expenditures on consumer goods and private investment typically see the steepest declines in recessions. This time around, however, nearly all of the job losses have been in private services industries.

The more muted decline in manufacturing employment (only 8% through May) is a positive signal. U.S. manufacturing employment has generally failed to recoup its losses following recent recessions. These layoffs were generally associated with increases in labor productivity, mitigating somewhat the impact on sector-level GDP/output. Nevertheless, unemployed workers from manufacturing struggled to find new jobs, thereby dragging on the economy’s aggregate demand.

Of the job losses through May, 77% have been driven by a set of highly affected industries. The most viciously affected have been restaurants, other hospitality, and personal services, which accounted collectively for 41% of the job losses though constituting just 15% of employment in January. Encouragingly, jobs in these industries bounced back quickly in May as social distancing was relaxed, indicating that once the need for social distancing has expired entirely, these industries should be able to jump back to prior levels of activity.

The May employment rebound also likely reflected the effect of the Paycheck Protection Program, which essentially provides grants to small businesses conditional on their maintaining payrolls.

No Massive Disruption of U.S. Manufacturing Due to COVID-19 So far, we haven’t seen massive disruption to U.S. manufacturing as a result of COVID-19. Industrial production fell 16% from January to the April trough, actually less than the 17% peak-to-trough drop during the Great Recession. The 83% collapse in auto production through April is one prominent counterexample, owing to a shutdown brokered between the United Auto Workers and the Detroit Three. Given that vehicle sales are likely to be down sharply in 2020 due purely to lower demand, manufacturers may not have balked to the degree they normally would have at curtailing supplies with a temporary shutdown. In any case, auto production resumed in late May. Most other manufacturing segments have seen more modest declines, likely driven more by the prospect of reduced demand than by supply-side disruptions. Some segments (notably electronics and IT equipment) have seen no hit to production levels so far.

Breaking down industrial production into key categories, the defense equipment category probably best reflects the impact of pure supply-side pressures, given that defense expenditures are not likely to be curtailed. Production of defense equipment is down just 7% versus January levels through May, and the rebound versus April levels suggests that supply-side constraints are receding. Finally, producer prices excluding food and energy were flat in May versus April levels; given the recovery in demand, this would not be the case if supply were highly constrained. Overall, we expect industrial production to continue to rebound insofar as aggregate demand supports it; we don’t think supply-side constraints will hold back a recovery.

Fiscal Policy Is Providing Crucial Lift to Incomes and Spending The U.S. fiscal policy response to COVID-19’s economic impact has been extremely impressive. As a result of the bills passed (including the $2.2 trillion Coronavirus Aid, Relief, and Economic Security Act signed March 27), the U.S. Congressional Budget Office projects that the U.S. federal deficit/GDP ratio will reach 17.9% in fiscal 2020 (ending Sept. 30). Combined with modest state and local deficits, we expect U.S. total government deficit/GDP to reach about 20% in calendar 2020, a 1,300-basis-point increase versus 2019. This would mark an unprecedented level of peacetime U.S. fiscal stimulus. This year’s stimulus will dwarf anything seen during the post-Great Recession stimulus or the New Deal era of the 1930s.

A good deal of the stimulus funds were disbursed in April and May, including the $1,200 one-time payment sent to most U.S. adults, federal supplements to unemployment insurance, and the Paycheck Protection Program targeting small businesses. This showed up clearly in the personal disposable income figures for April, which were up 11% versus January despite a 10% drop in labor income. The gap is accounted for by a fall in net taxes and transfers, which includes the effect of the fiscal stimulus.

However, despite the 11% jump in personal disposable income, personal consumption plummeted 19% through April. This means the personal saving rate surged to 33% in April. Does this mean that the stimulus is failing to prop up spending (and thereby aggregate demand in the economy)?

Even though much of the stimulus has clearly been saved so far, we think spending growth would have been drastically worse without the stimulus. One study examined household-level data from SaverLife, a nonprofit that helps families track income, spending, and savings. It looked at the effect of the one-time cash payments included in the CARES Act (around $1,200 per adult) and found that households increased their spending by $0.30 for each dollar in stimulus received in the first month. Unsurprisingly, the effect was much larger for liquidity-constrained families (those with smaller cash savings balances). Because the timing of receipt of stimulus checks varied substantially across households, identifying the causal effect of the stimulus is very credible.

Furthermore, we suspect that the stimulus will provide an even greater boost to spending eventually, once the social distancing concerns about shopping abate along with the virus. To some degree, this has occurred already in May and June as lockdowns have been lifted. According to aggregated credit card data from tracktherecovery.org, consumer spending has rebounded from a trough of down 33% (versus January levels) in April to down 13% in early June. Ultimately, the wide availability of vaccines that we project for the first half of 2021 should quell remaining COVID-19-related hesitations about shopping.

In the meantime, households and firms alike are building up an impressive pool of savings with which to eventually fuel spending growth. We expect that domestic private (aftertax) income will grow about 9% in 2020 despite the collapse in nominal GDP. Domestic private income is the sum of private expenditures, the government deficit, and net exports. Equivalently, it is nominal GDP less taxes net of transfers. Despite a collapse in private expenditure (and therefore GDP), private incomes will be supported thanks to a massive boost in government deficits.

In the short term, much of the income windfall will fuel higher savings. This extra savings should bolster household and firm balance sheets. Not only will this help curb the risk of financial distress (which threatens to weigh on economic activity well after the pandemic subsides), it also will encourage households and firms to spend more in the period once the pandemic is over.