Global financial markets continued to claw back from their coronavirus-crisis lows in May 2020. At month-end, the Morningstar Global Markets Index--a broad gauge of global stock markets--had rebounded 40% from its recent low and sat just 12% below its mid-February peak. Fixed-income markets have also normalized. The Morningstar US Core Bond Index was within spitting distance of its nearby highs as of the end of May. Here, I will take a closer look at how the major asset classes performed, where investors were putting their money, and whether there are bargains left after markets have bounced back--all through the lens of exchange-traded funds.

Broad-Based Gains May's gains were widespread. Of the 2,133 nonleveraged exchange-traded products in Morningstar's U.S. database, just 140 (6.5%) posted losses for the month. Prominent among the losers were ETFs that invest Hong Kong stocks. The Hong Kong market came under pressure in late May after the U.S. indicated it might revoke Hong Kong's special trade status in response to China's move to implement new national security laws within the city. At one point, the iShares MSCI Hong Kong ETF (EWH) was down as much as 9.3% in response to this news.

Exhibit 1 features May market price performance figures for a sampling of Morningstar Medalist ETFs representing most major asset classes. Investors in a blended global market portfolio gained just over 3% during the month. Stock markets were up across the board, though some fared better than others. Developed international stocks outperformed both U.S. and emerging-markets stocks. 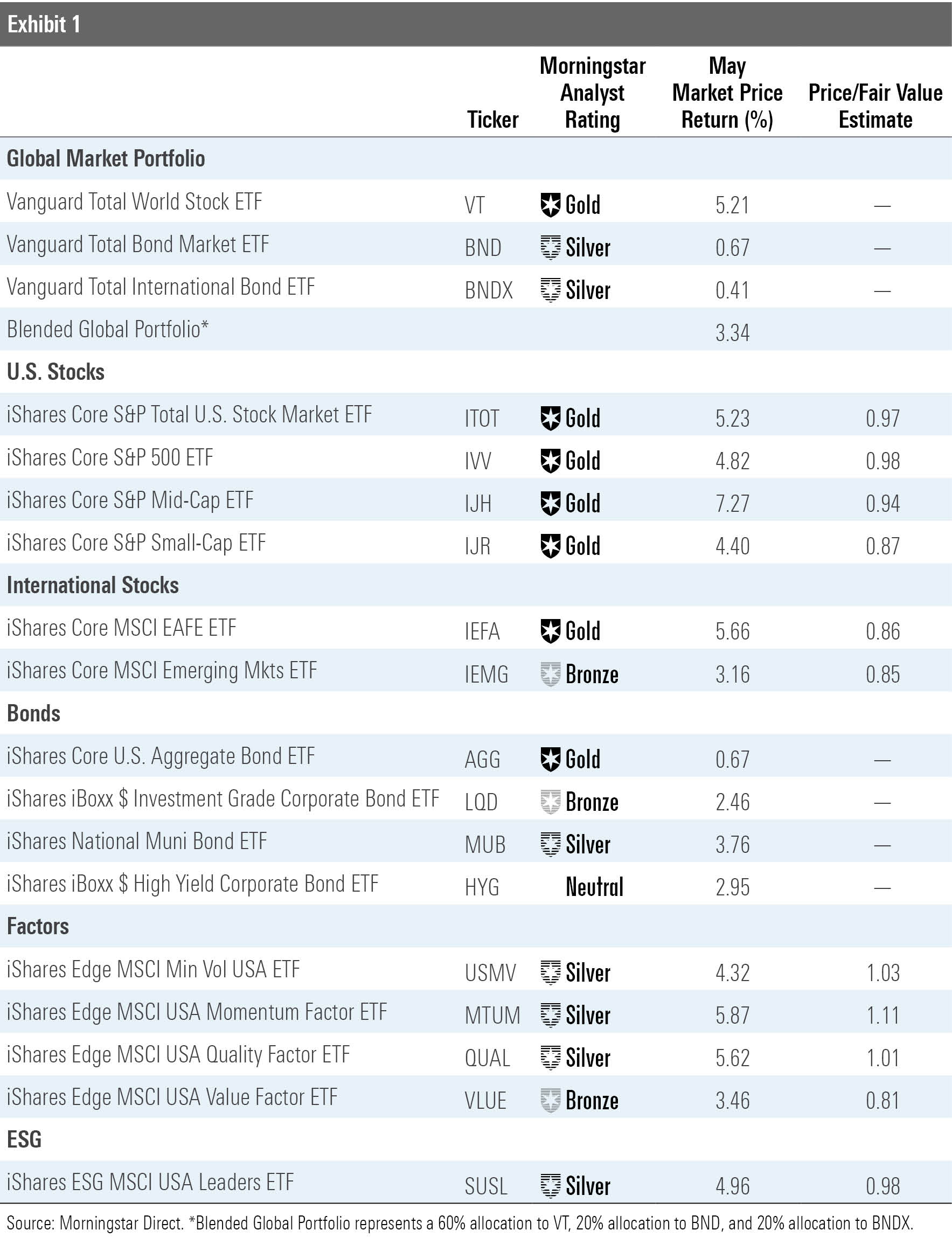 Within the U.S. market, mid-caps handily outperformed both large and small caps for the second month in a row. IShares Core S&P Mid-Cap ETF (IJH), which has a Morningstar Analyst Rating of Gold, outpaced Gold-rated iShares Core S&P 500 ETF (IVV), chiefly because of its exposure to better-performing names in the consumer discretionary and healthcare sectors. IJH also outstripped Gold-rated iShares Core S&P Small-Cap ETF (IJR)  in May. In this case, much of its relative performance can be attributed to stock selection within the technology and healthcare sectors.

The performance spread across the diagonal of the Morningstar Style Box widened a bit in May. For example, iShares S&P 500 Growth ETF (IVW), which falls in the large-growth Morningstar Category, outperformed iShares S&P Small-Cap 600 Value ETF (IJS), which sits in small-value, by 3.4 percentage points. In April, IVW beat IJS by just 36 basis points. In March, IJS lagged IVW by nearly 15.5 percentage points. This year has put an exclamation point at what may or may not be the end of a decade-plus of suffering for value stocks.

Fixed-income markets continued to recover in May. Credit markets snapped back into order following the Federal Reserve's late-March intervention. Last month, the Fed began purchasing corporate-bond ETFs. As of May 29, the Fed had purchased shares of 15 different corporate-bond ETFs with a total market value of $1.3 billion.

Strategic-beta ETFs representing a variety of individual factors had a mixed showing versus the broader U.S. stock market. Value-oriented funds continue to struggle on a relative basis. Meanwhile, momentum and quality stocks have been resilient. At the end of May, iShares Edge MSCI USA Value Factor ETF (VLUE) was trading at a 19% discount to its Morningstar fair value estimate, while iShares Edge MSCI USA Momentum Factor ETF (MTUM) was priced 11% higher than our analysts' assessment of its intrinsic worth.

ETF Flows Do the Safety Dance ETF flows again favored bond funds in May. Fixed-income ETFs took in nearly $30 billion in net new flows--a monthly record. Over the past two months, estimated net flows into fixed-income ETFs amounted to just over $51 billion. This is the largest two-month net flow into bond ETFs on record by a wide margin. The next-closest two-month stretch was June/July 2019, when investors added just over $36 billion to bond ETFs.

Notable among the asset-gatherers in the bond space were Bronze-rated iShares iBoxx $ Investment Grade Corporate Bond ETF (LQD) and Neutral-rated iShares iBoxx $ High Yield Corporate Bond ETF (HYG). Both funds featured prominently on the Fed's shopping list, ranking first and fourth by market value, respectively, on the roster of its May ETF acquisitions.

Physical gold ETFs continued to gain assets from safe-haven seekers. SPDR Gold Shares ETF (GLD) saw $3.7 billion in net new inflows in May. This marks the sixth-straight month that GLD has seen net new inflows. In sum, investors have poured nearly $13 billion in new money into GLD over the past six months. This is the highest level of absolute net new flows it has witnessed over any six-month span since its November 2004 inception. 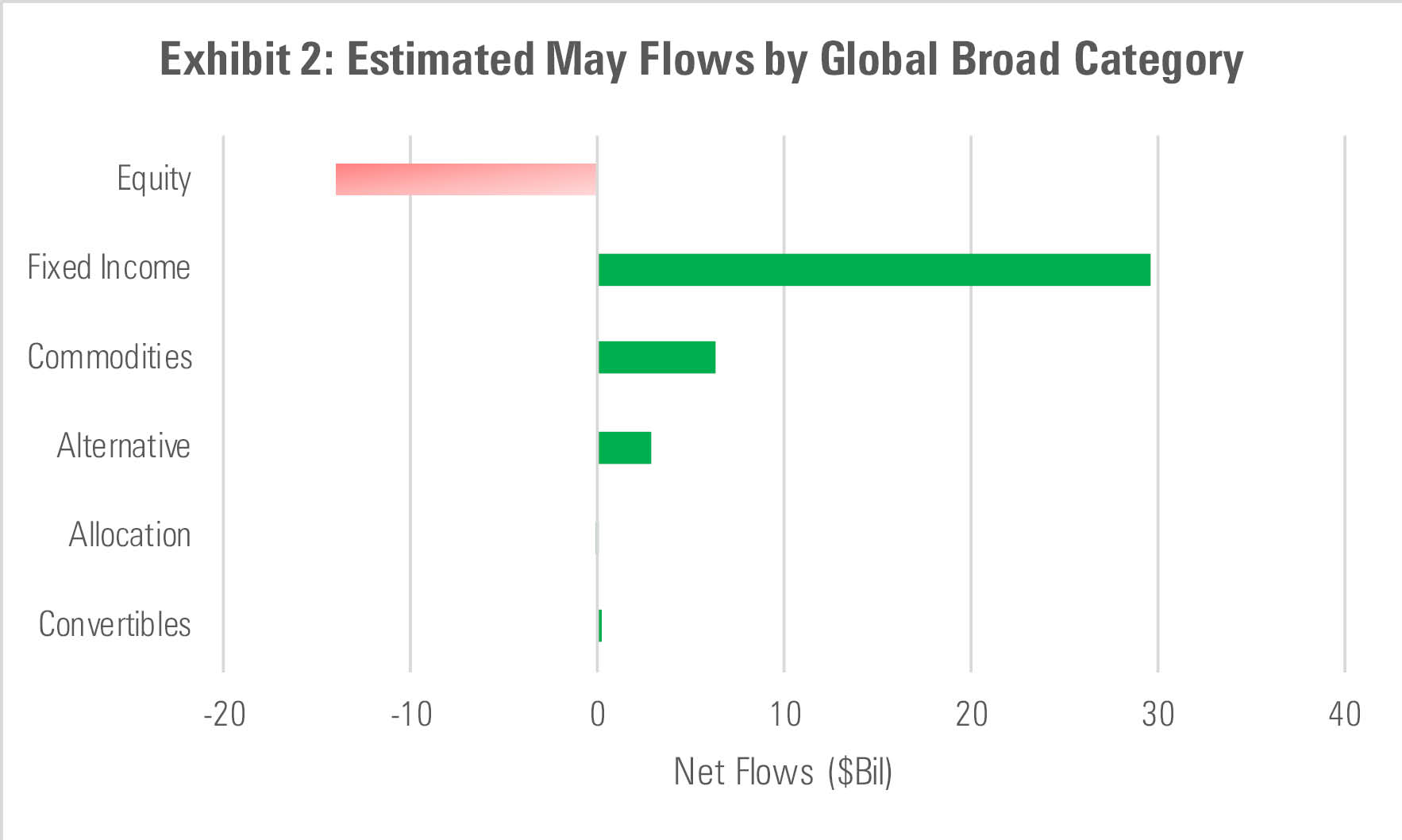 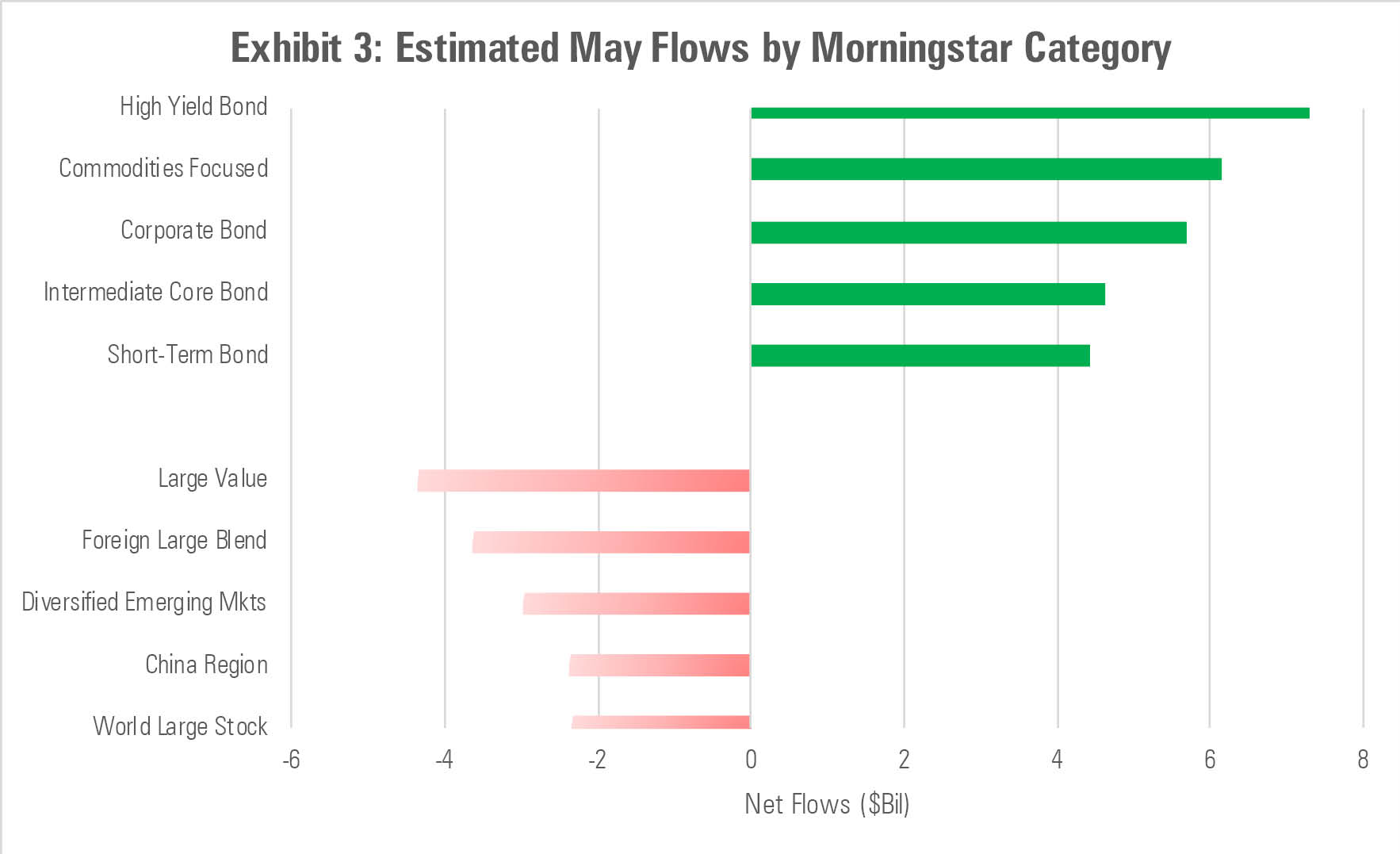 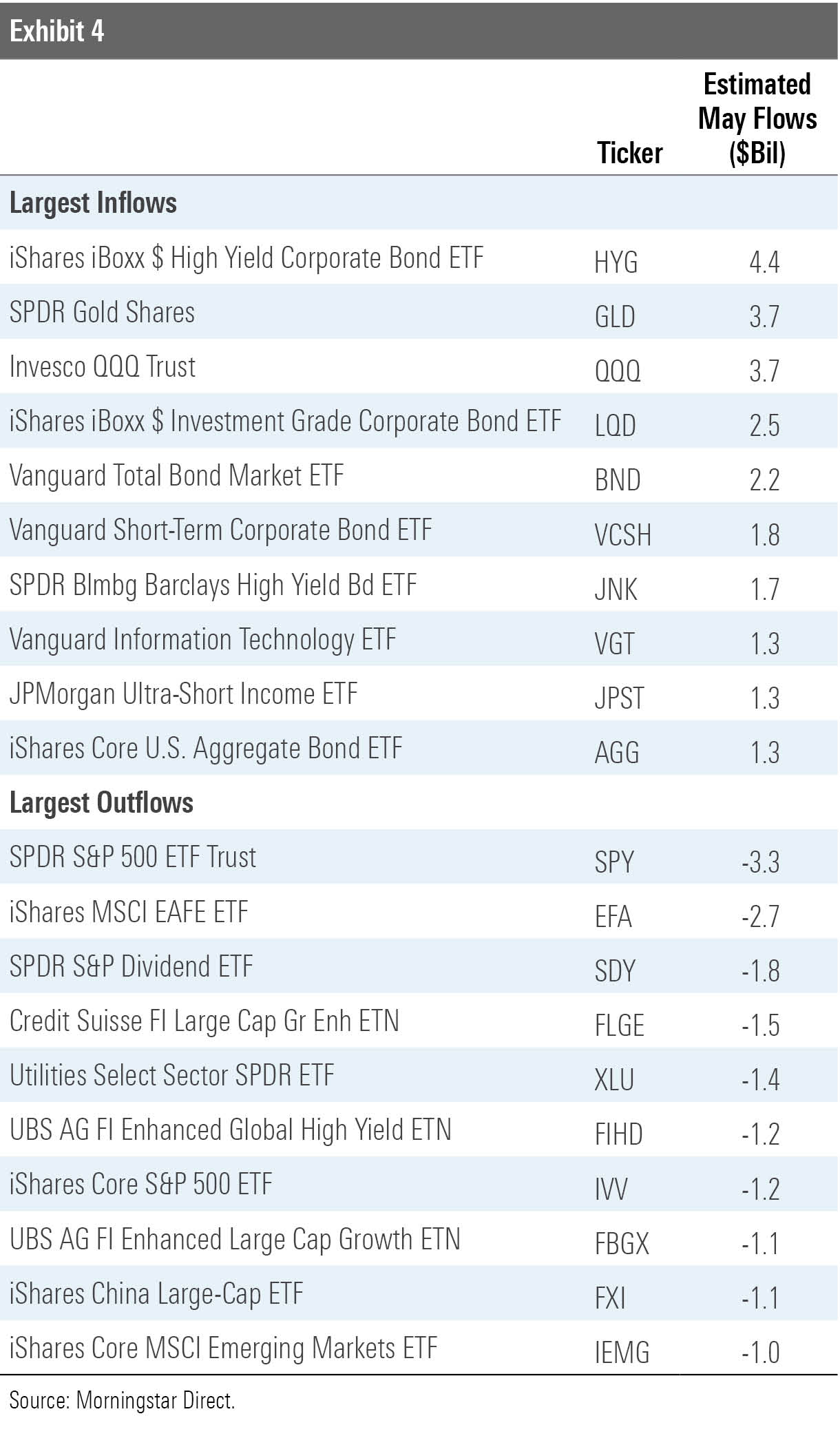 Looking at flows at an ETF issuer level can help tune out some of the noisiness that is a regular feature of short-term ETF flows and yield some signals. From this perspective (see Exhibit 5), it appears that the steady-Eddie clientele served by firms like Vanguard, which tend to serve more advisors and individual investors, remain steady as ever. Meanwhile, market volatility continued to be a boon for firms like State Street and ProShares, whose ranges cater to a crowd that tends to use ETFs in a more tactical manner. 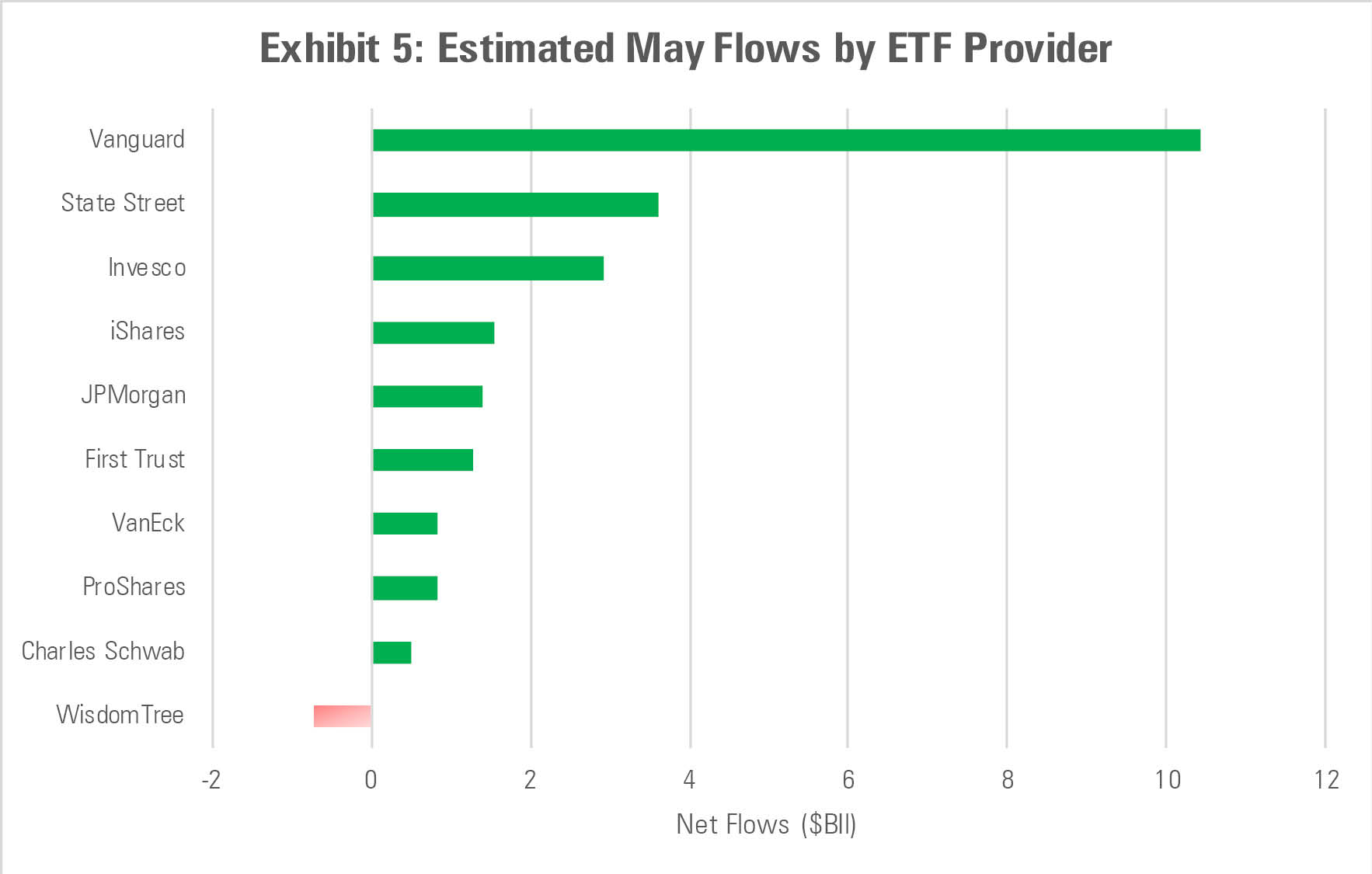 Exhibit 6 features the 10 ETFs that were trading at the largest discount to their fair value estimates as of the end of May. Five of them belong to the equity energy category. Pain has been pervasive in the energy sector this year as demand has declined and supply has continued to flood the market. As producers ran out of places to store their output, prices collapsed--as did the share prices of firms operating in the oil and gas services industry.

But the market is a discounting mechanism, and in May, investors continued to wager that the worst has passed.

Energy stocks continued to rally in May. Energy Select Sector SPDR ETF (XLE), which holds the energy names in the S&P 500, finished the month 68% higher than its nearby trough. But these stocks have fallen a long way. Even after a double-digit rally, many are still trading at steep discounts. Despite its strong bounce off the bottom, XLE was still 34% below its nearby peak as of the end of the month. 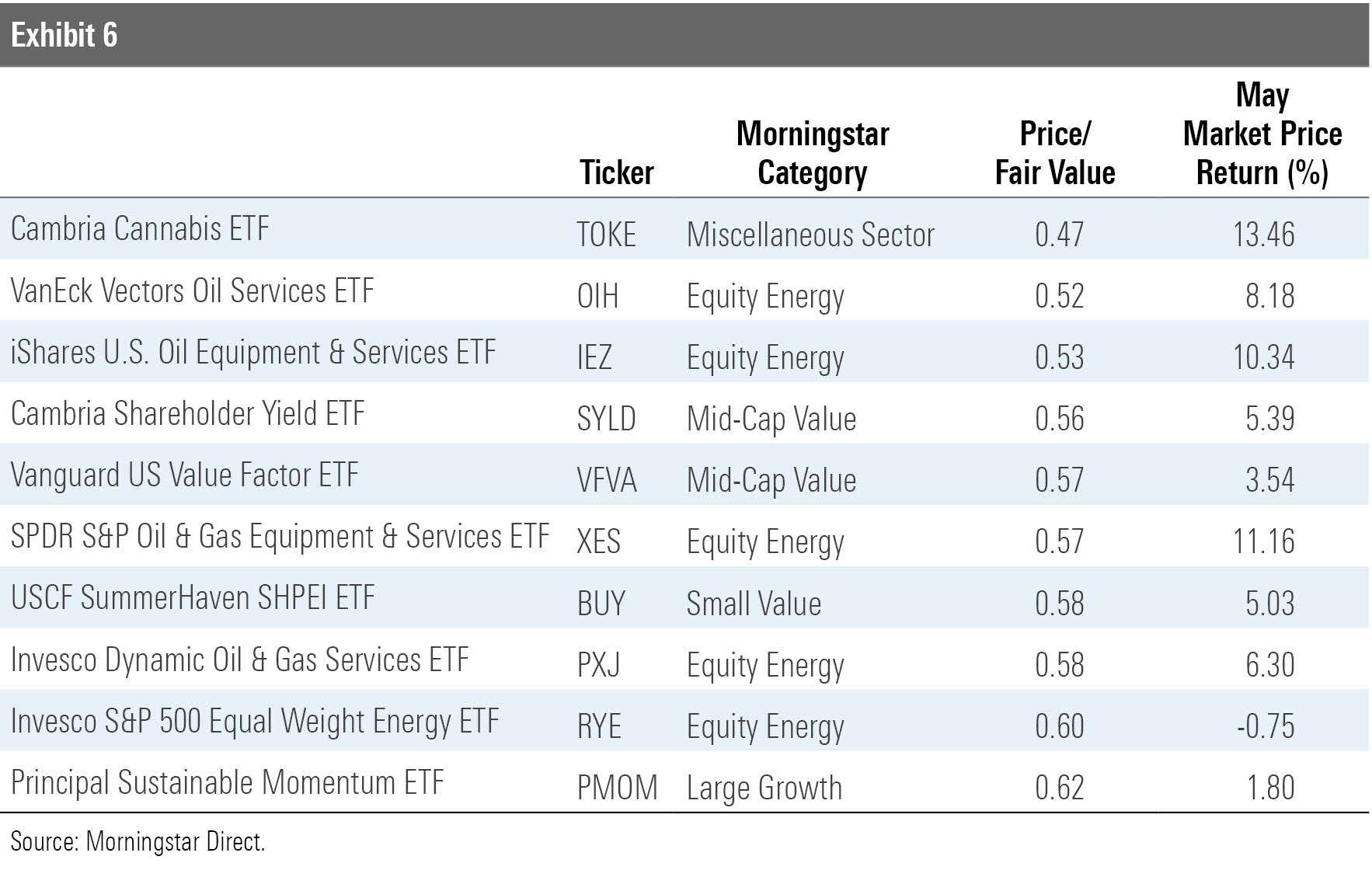 Exhibit 7 features the 10 broad-based ETFs (those ETFs belonging to one of the mainline Morningstar Style Box or other broader geographic categories) that were trading at the largest discount to their fair value estimates as of month end. The common thread among most of these funds is an orientation toward smaller, cheaper stocks. Some of them deliberately lean into value by virtue of selecting and weighting stocks based on their relative cheapness. This is the case for funds like Vanguard U.S. Value Factor ETF (VFVA). Others back into a deep-value orientation by selecting stocks based on their dividend and/or shareholder yields. Cambria Shareholder Yield ETF (SYLD) is an example. The fund selects its 100-stock portfolio from the highest-yielding 20% of its selection universe based on firms' dividend and net share-buyback yields. 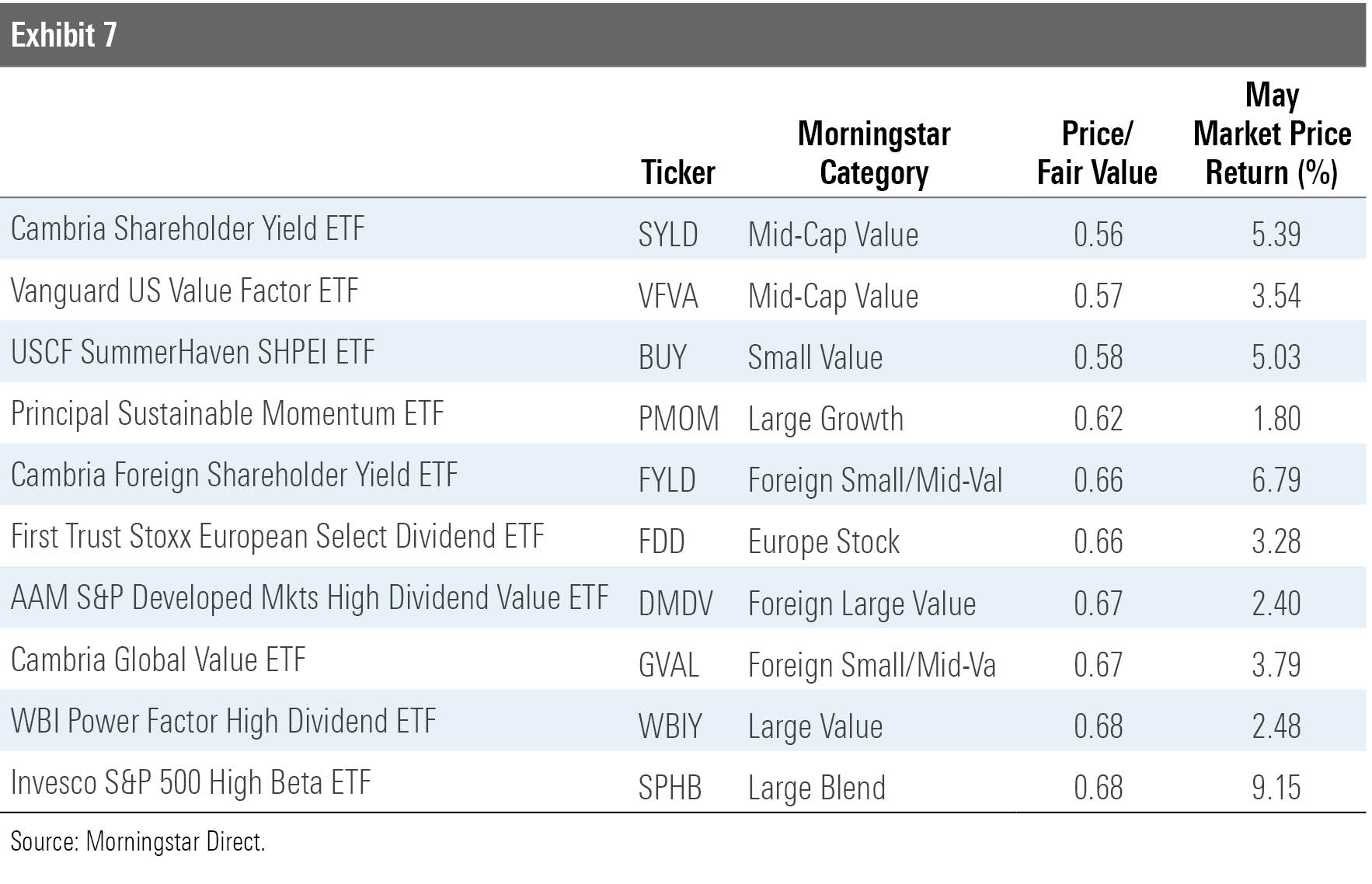 To explore the full analysis, download this year’s U.S. Fund Fee Study. Get My Copy

Ben Johnson does not own shares in any of the securities mentioned above. Find out about Morningstar’s editorial policies.