One of the fundamental truths about investing is that there is no such thing as a free lunch. An investment that promises higher returns is going to come with higher risks of losing money. And often, those bigger return promises not only come with greater risks, but with a lot more complexity and potentially, higher fees.

That is certainly the case with securities known as structured notes, investments that some financial advisors have been pitching to clients with growing frequency.

In a recent in-depth report on structured notes, called “Structured Notes: Buyer Beware,” my colleague Maciej Kowara and I found a lot we didn’t like when it comes to these complicated investments. (Morningstar Office and Direct clients can find the report here.)

In this article, we will aim to help answer the question, “Should I invest in structured notes?” with a primer on their inner workings. We’ll do so with a look at a recently issued note that offered up the tantalizing yield of 13%.

What is a Structured Note? Structured notes are basically a stock/bond hybrid with a limited life span or maturity. When an advisor touts them, they may sound appealing because they often combine high coupon rates with some level of principal protection that would enable their buyer to get their original investment back. In the current environment, with interest rates at rock-bottom, their yields may seem especially attractive.

Like bonds, these securities typically make regular coupon payments and are set up to repay principal upon maturity. Legally, they are unsecured debt obligations of the issuing bank--typically large investment banks like HSBC, JPMorgan Chase, Barclays, and Goldman Sachs--and their creditworthiness is ultimately tied to the issuer. (Structured notes took a serious reputational hit in the wake of the global financial crisis in 2008-09, when investors holding structured notes issued by Lehman Brothers lost nearly all their original investment.)

Structured notes can be set up in a myriad of ways. Issuers basically mix and match the key product attributes to meet demand, leading to literally hundreds of potential different structures. The complex design of structured notes often makes it tough for investors to understand exactly what they’re getting.

Importantly, unlike most bonds, their coupon payments are often contingent on the performance of an underlying asset such as a stock or index, which means coupons may not always be paid.

In contrast to stocks, though, whose gains are potentially unlimited, structured notes often have no potential to appreciate in price or have an explicit cap on maximum gains.

A 13% Yield: What Could Go Wrong? Here’s an example of how an enticing yield belies the inner workings of a structured note linked to the stock price of oil and gas company Diamondback Energy (FANG) .

Officially called a contingent coupon note, this security was issued in January 2020 by Barclays Bank PLC. The note has a two-year maturity and offered a tempting an annualized yield of 13% through a quarterly coupon payment of $32.50 per $1,000 in principal value. The prospectus filing notes that all payments are based on FANG’s stock price.

The key for buyers of the note is that it will only pay that quarterly coupon if FANG shares are trading at or above a predefined level--defined as 70% of the initial share price--on what is known as a quarterly observation date. If the stock drops below that level, investors don't receive a coupon for the quarter.

Based on past performance, this probably seemed like a fairly safe bet in January.

As of the prospectus date of Jan. 10, 2020, FANG had been above the coupon barrier of $64.58 for most of the previous five years. And while the stock was volatile, as are many energy company shares which swing up and down with changes in the price of oil, even a repeat of FANG’s biggest calendar-year loss of 26.3% in 2018 would still have left noteholders above the 30% decline that would have halted coupon payments.

Then came the historic drop in oil prices following the onset of the coronavirus, and FANG shares plunged more than 70% in the first quarter. While the stock regained some ground by the first quarterly coupon observation date on April 10, 2020, it was still well below the $64.58 per share coupon barrier.

That meant investors didn't receive a coupon for the quarter. The note still has about 18 months left until maturity, but if it remains below the coupon barrier on future quarterly observation dates, investors will miss out on additional coupon payments. 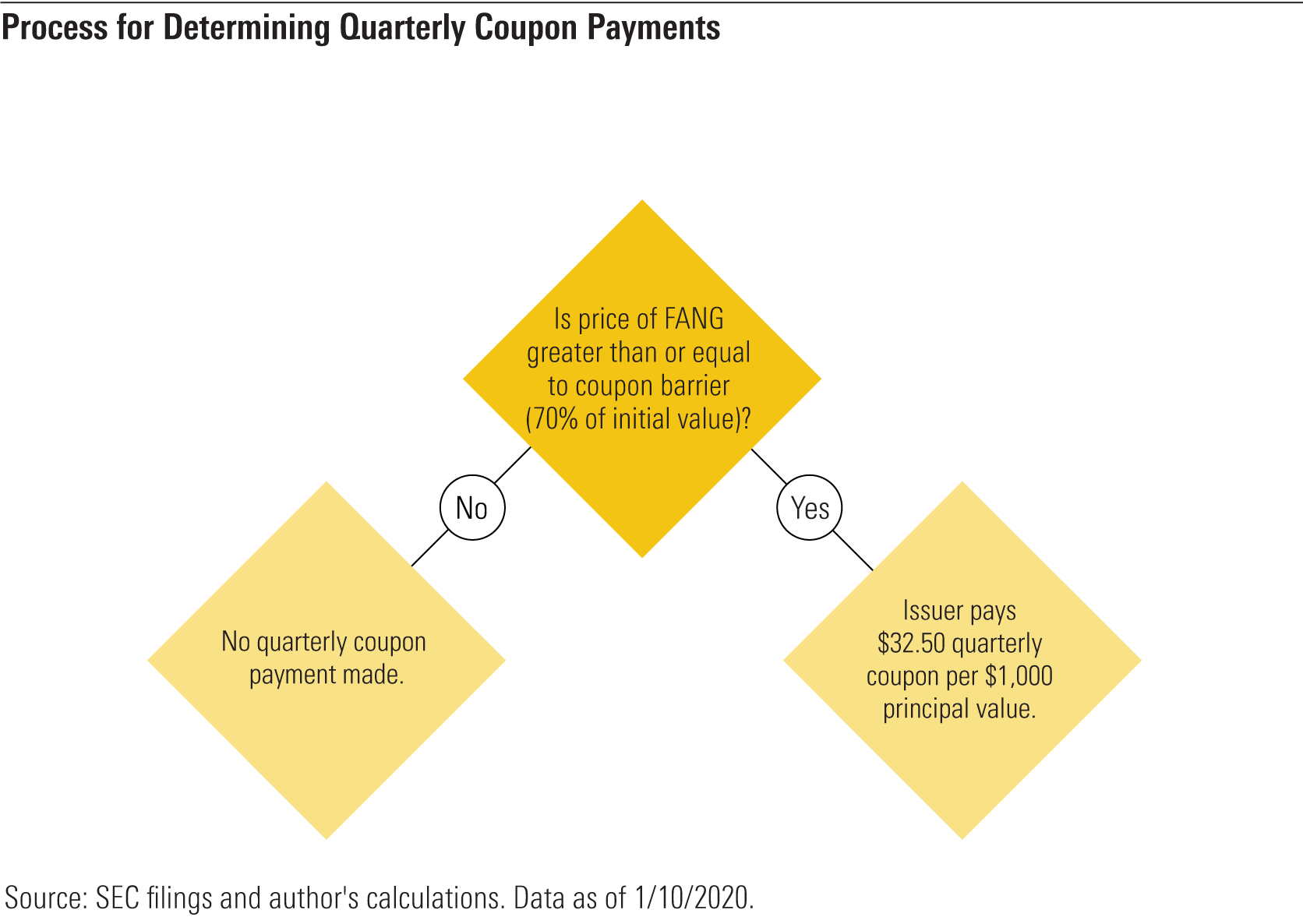 Investors disappointed by the missed interest payment don't have much recourse. Because structured notes issued in the United States aren't traded on an exchange, it is generally very hard to find a buyer for notes after they have been issued. They could also hope that the issuing bank will agree to buy back the note (which would typically mean going back to the broker that sold the notes to you). In either case, they'd probably have to sell at a price much lower than the purchase price.

Investors who continue holding the notes face some additional uncertainty. For one, issuing banks can force the notes to be redeemed, or called, prior to maturity at any point after an initial six-month period.

If the notes are called prior to maturity, investors receive their principal back plus a contingent coupon (if the stock is above the coupon barrier). In the case of the FANG notes, Barclays has sole discretion--in other words, without the consent of noteholders--to decide whether to call the notes on specific call valuation dates starting in July 2020. Investors therefore have no way of knowing the notes' actual life span.

No Money-Back Guarantee Traditional bonds promise to pay back buyers 100% of their initial investment. That will also be the case for a structured note, but only if the stock or other underlying benchmark doesn't close below its barrier value at the time the note matures.

In fact, if FANG remains below the $64.58 barrier value at its maturity date in January 2022, noteholders would take a loss in proportion to FANG’s stock-price performance over the life of the note. 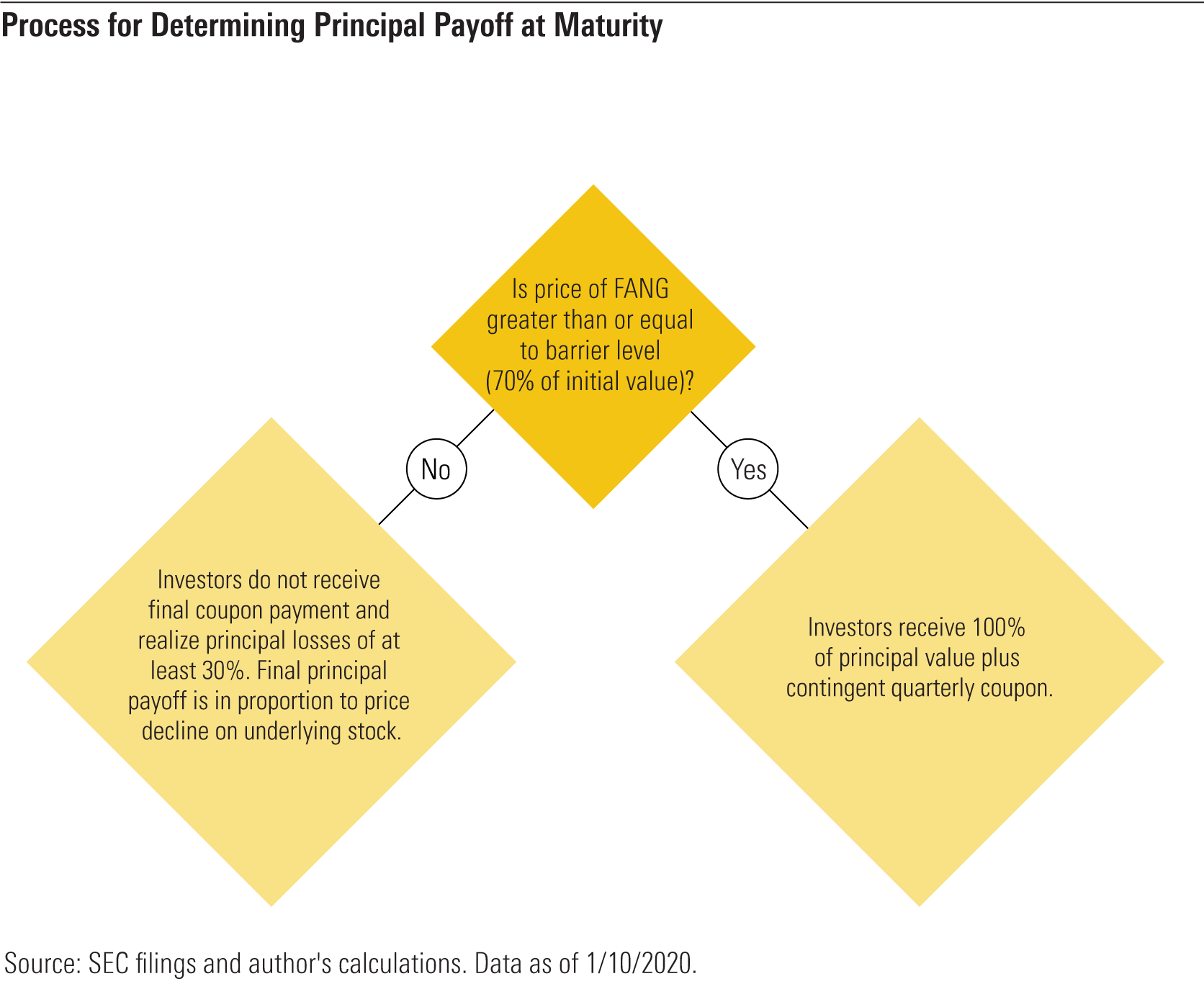 Granted, the FANG note could be viewed as an extreme example of what can go wrong with structured notes. But other structured notes linked to highly volatile underlying stocks or asset classes have suffered from similar woes. Investors in Asia--where structured notes are widely used by individual investors--have reportedly suffered billions of dollars in losses from structured notes tied to oil- and gas-linked indexes.

And if this isn’t complicated enough, a popular variation is notes where returns are tied to more than one index or underlying security. In almost every case, the final payoff investors receive is based on performance of the underlying asset with the lowest returns.

Quite simply, it’s hard to think of another example where investors would voluntarily purchase something that promises to give them the worst of multiple outcomes.

Hidden Costs Not only are the inner workings of these notes complex, but they come with high fees that are invisible to investors unless they read the prospectus.

Structured notes are typically sold by brokers, who receive commissions averaging about 2% from the issuing bank. While investors don't pay these fees directly, they're built into the principal value as a markup or embedded fee.

In 2013, the SEC began requiring issuers to disclose estimated fair values for structured notes. We reviewed a sample group of about 50 notes issued in the United States at the beginning of 2020. On average, the issuer-reported fair values were about 97.1% of the value investors paid to purchase the note. That translates into an average markup or embedded fee of 2.9%.

The Barclays contingent coupon notes have a particularly steep fee structure. The notes were sold in increments of $1,000, but Barclays estimates the underlying value of each note was just $954.10 as of the issuance date. That means the notes were sold at a markup of 4.59%--higher than more than 80% of the notes in our sample group. Because the notes have a maturity of about two years, that's effectively an expense ratio of 2.3% per year. If the notes were called early, investors would end up paying even more in percentage terms.

Structured notes still account for a tiny fraction of investable assets in the U.S., but they've been gaining in popularity amid recent market volatility and record-low interest rates. They're often described as a way for risk-averse investors to capture additional income while limiting downside volatility. But their embedded costs, complexity, lack of liquidity and transparency, and often unfavorable payoff profiles make them difficult to use in a portfolio. Investors tempted by double-digit yields should therefore tread carefully--or take a pass.

To learn more, download our paper "Structured Notes: Buyer Beware." Get My Copy